Thanks to Lara for the heads up, as usual!

The Irish Minister for Foreign Affairs,  Micheál Martin, T.D., today announced a major grant for a landmark Irish project in New York. Minister Martin said that a total of €2.3 million will be provided immediately towards the construction of  the Irish Arts Center in Manhattan…The Minister paid warm tribute to New York City Mayor Bloomberg and Speaker Christine Quinn for their exceptional support for the initiative. He also thanked Gabriel Byrne for his support for the Arts Center and for his longstanding work in promoting Irish culture throughout the U.S. 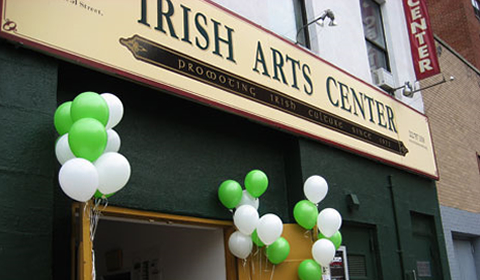 Over the years, Ireland has provided New York with cultural assets like Liam Neeson, Gabriel Byrne and that sometime visitor Bono. Now the Irish government has made a more numerically quantifiable contribution to the city in the form of a $3.5 million grant that will be used to build a new Irish Arts Center in Manhattan.

Congratulations to all involved in this long-term and very strategic project! As Christine Quinn of The New York City Council  says about the Irish government:

They understand that having a strong America be with Ireland, both in the south and north, is critical to the future of the country.” She added that the grant was a sign of “how strong the bridge is between the countries, and between Ireland and New York.