The Byrnes and the Boards

“Every village, every city, needs a theatre. It’s not just a building; it’s about being exposed to new ideas. Theatre changes the way we view society and connects us to global ideas. In the past, we’ve suffered from being closed off.”

“The theatre is seriously important for who we are. In the past, the most important building in a village was a church,” the actor added. “A theatre can be as powerful as a church, but without being as controlling.”

The Irish Times article  is now behind a paywall.

The Stage News UK tells us that both Gabriel Byrne and Gay Byrne have been appointed honorary directors of the new theatre:

The Grand Canal Square Theatre, part of a major docklands project by local impresario and developer Harry Crosbie, has been designed by award-winning architect Daniel Libeskind, the man chosen for the redesign of New York’s World Trade Centre. Building work on the theatre has already started and the aim is to have it completed by next March 17, St Patrick’s Day.

Byrne and his namesake, Gay Byrne, the former Late Late Show host, were appointed honorary directors of the theatre for the board laying ceremony. With seating for 2,100, it will be city’s largest venue since the Theatre Royal, which closed back in the 1960s. The theatre will be run by Live Nation and managing director Mike Adamson said it would enable Dublin to stage major international productions in ballet and opera. 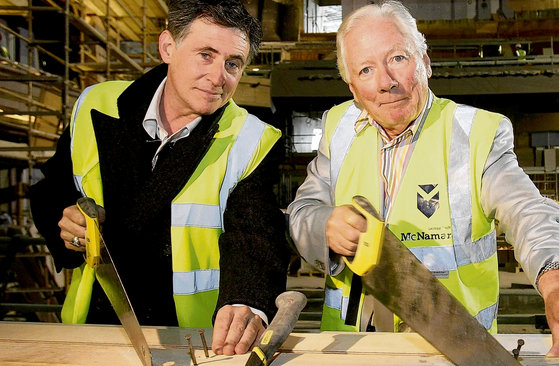