Gabriel Byrne at the ADL Concert

Alanna over at the Anti-BVBL Blog attended the concert and had this to say:

I had the privilege of attending a SPECTACULAR event last evening at the Kennedy Center – ADL’s 15th Annual Concert Against Hate.

The Masters of Ceremonies included Liev Schreiber and Gabriel Byrne.  Their presentation was flawless and the introductions of the different honorees was beyond touching.

In between recognizing the honorees, the National Symphony Orchestra played under the direction of Emil de Cou, who appeared larger than life as he commanded the performance.

This article at the Anti-BVBL Blog is no longer available.

Sounds like an amazing and uplifting evening! Now if someone only had pictures…. 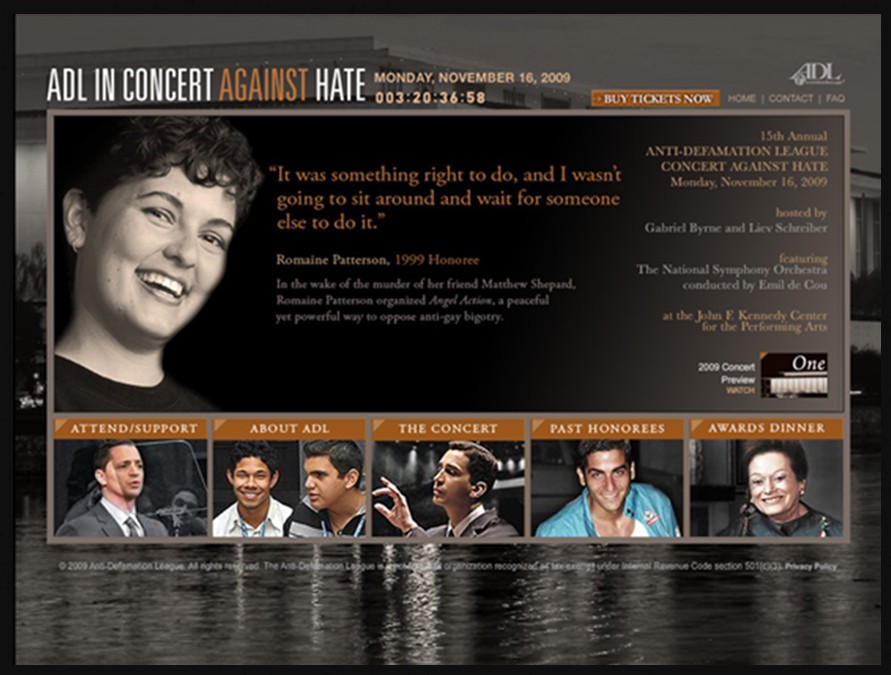 Gabriel Byrne and Liev Schreiber will co-host the Anti-Defamation League’s In Concert Against Hate on Monday, November 16 2009, at  The John F. Kennedy Center for the Performing Arts in Washington, DC.

The official ADL concert website provides information about ticket availability and the Awards Dinner which precedes the concert [the offical ADL Concert website for 2009 is no longer available].

ADL In Concert Against Hate is a powerful and inspirational event that honors heroes in the fight against intolerance, extremism and terrorism. The Concert tells the stories of ordinary men and women who have performed extraordinary acts of courage and compassion when confronted by hatred and bigotry. These are individuals who could not stand by while others were the targets of injustice, but instead chose to act. We also tell the stories of people who were themselves targets of hate, including those who have lost their lives in this struggle. (from the website).

Thanks to Lara for this news!