Flight from Death: The Quest for Immortality is a 2003 documentary investigating “humankind’s relationship with death.”

Directed by Patrick Shen and narrated by Gabriel Byrne, it is available for purchase at Amazon.

Be sure to visit the official website for the film.

Flight from Death features an all-star cast of scholars, authors, philosophers, and researchers including Sam Keen, Robert Jay Lifton, Irvin Yalom, and Sheldon Solomon culminating in a film that is “not only thought-provoking but also entertaining and put together with a lot of class” (Eric Campos, Film Threat). Three years in the making and beautifully photographed in eight different countries, Flight from Death is “a stimulating, ultimately life-affirming film, filled with big ideas and revelatory footage” (Jeff Shannon, Seattle Times).” (from the website). 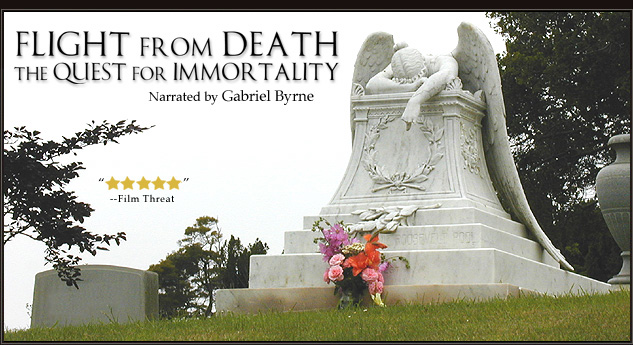 Thanks to Riitta for this info!