UPDATE Feb 21: The award for Actor in a Lead Role – Television went to Brendan Gleeson for his work in Into The Storm, so cheers to him! And now it appears Mr. Byrne was not in the house after all. His tribute to John Boorman, who received the Lifetime Achievement Award, was videotaped, along with congratulations from Pierce Brosnan and Burt Reynolds. As soon as any video becomes available, links will be posted here.

UPDATE Feb 19: According to staff at RTÉ One, lucky folks in Ireland can watch the festivities live on TV and then view the show on the RTE Player the day after the ceremony. For the rest of us, clips will be published at the IFTA website and on YouTube at some point in the near future.

And, according to UK Film and Television News: 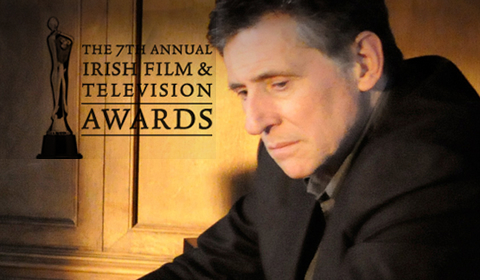 UPDATE Feb 8:  In a press release issued today, 8th February, it’s been announced that  the IFTA Awards Ceremony will be broadcast LIVE from Dublin’s Burlington Hotel on 20 February 2010 at 9.35pm on RTÉ One!

‘Tis the awards season! Next up: The Irish Film and Television (IFTA) Awards. The ceremony takes place in Dublin on February 20.

Mr. Byrne has been nominated for his role as Dr. Paul Weston in In Treatment. The category is Actor in a Lead Role – Television.

The competition is fierce. Brendan Gleeson, Liam Neeson, and Jonathan Rhys Meyers are all vying with him for this honor.

In addition, John Boorman will receive a lifetime achievement award. As you recall, he presented Gabriel to us in Excalibur and I would give him this award for that achievement alone!

Congratulations to Mr. Byrne and all who have been recognized for their artistic contributions.

Thanks to Diba and Ann C. for the heads up!