So, what does Gabriel Byrne do these days when he is not filming the third season of our favorite series, In Treatment? Well, we know he does not sit around relaxing, that is certain!

Monday, June 28, he met with Irish Tourism Minister Mary Hanafin in New York, of course, in his role as Cultural Ambassador for Ireland, according to the Dublin-based online magazine Business and Leadership. [This article is no longer available on the Internet]:

At the start of her visit to the New York today, Minister Hanafin met with actor Gabriel Byrne, Ireland’s first Cultural Ambassador. Byrne, who is currently filming in New York, is working with Minister Hanafin and Culture Ireland, on behalf of the Government, to help promote Irish arts, culture and the creative industries internationally. The Minister said her discussions with Byrne covered planning for upcoming initiatives including Culture Ireland’s special focus on the US in 2011.

Minister Hanafin is also using her visit to advance the promotion of Irish arts and culture, which is a key strand of the Ireland – US Strategy launched last year. “At the Farmleigh Global Irish Economic Forum last year, culture was seen as a central driver of Ireland’s profile abroad with consequent benefits for tourism, trade and investment,” she explained.

One of the most intriguing projects Minister Hanafin is involved with is the launch of the Irish 1901 Census online to a US audience, a step sure to get genealogy fans and folks with that drop of Irish blood in their past poring over these records on their computer screens.

The Belfast Telegraph notes [This article is no longer available on the Internet]:

The Government has marked the launch of its 1901 census online with an exhibition in New York. Tourism Minister Mary Hanafin travelled to the US to promote the database, which helps people explore their ancestry.  “Launching the last full Irish census online, dating from 1901, will encourage more people to look at their history and ancestors,” said Ms Hanafin.

The Telegraph article reports that “more than 250 US travel writers will also be invited to Ireland as part of the campaign” and provides this picture of the meeting: 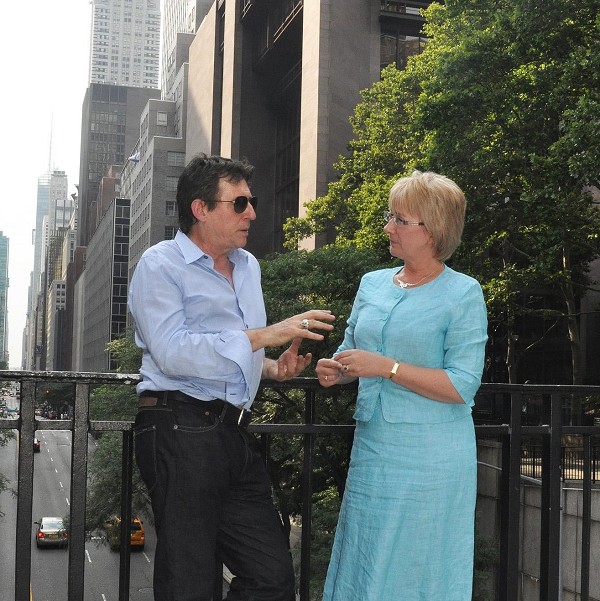 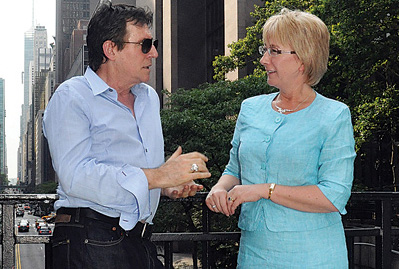 From a slightly different angel, um I mean angle.

It turns out this new role of Mr. Byrne’s has been inspirational to someone you might find surprising: GMJ Associates, which “offers consultancy in corporate social responsibility (CSR) to companies based in Ireland.” Um, we could use a group like this in the US!

Gráinne Madden, the company’s founder, blogs about Gabriel as a role model for CSR programs:

“Why do I think this works so well? He’s clearly passionate about the capacity of the project to help Ireland and feels it is something he can do for Ireland, giving back to the country of his birth. We’d all like to feel passion about the volunteering we do and in fact it’s probably a necessity in order to drag us through the obstacles and the days when it’s not going so well. He feels a connection with the audience for this project as an Irishman who has spent much of his life away from Ireland. There is a good fit with his brand image – a serious actor, interested in literature, theatre and the arts. He’s recognised as an Irish actor but one who’s gone international, just as this project wants to. Utilising his brand image brings attention to the project and his core skills of acting and communication can also be used to good effect in promoting this.”

And, just in case you have developed the mistaken impression that ministers and business people are the only folks out there being inspired by Mr. Byrne, here is this:

Most celebrity stylists are rarely impressed by the stars they work for. But this week one one confessed to being bowled by the charm of Irish actor Gabriel Byrne. Grooming expert Dylan Bradshaw told the press he was called in to look after Byrne’s locks ahead of his photoshoot for the upcoming charity book by fashion photographer Barry McCall.

Read the rest of his very nice comments and be patient. Barry McCall’s book and In Treatment, Season 3 are both scheduled to knock us out in October, 2010!