Of Gravitas and Glaciers–Smilla’s Sense of Snow

There are two things you need to know about the film Smilla’s Sense of Snow.

First, there is a lot of snow. A great deal of snow. Snow on the ground. In the air. Everywhere. And there is ice. And cold water. And icebergs. And even full-blown, life-sized glaciers. If the weather is warm where you are at the moment, it will FEEL much, much colder once the opening scene rolls by, so grab a blanket and some hot chocolate.

Secondly, it is based on Peter Hoeg’s much-admired book of the same name and there was simply no way, it turns out, to translate that highly detailed and strenuously philosophical work to the screen. But everyone tried anyway. And so we have this lovely, intricate, tonally haphazard, messily plotted, gorgeously photographed, and scrumptiously acted film, for which we thank all involved. Even if it is a bit of a failed effort, there is so much to appreciate and adore in this movie that forgiveness is easy.

About Gabriel Byrne’s role as the Mechanic, the mysterious neighbor who becomes Smilla’s knight errant in detection, Ann Biderman, the screenwriter, explains:

I was concerned that the poetic autism he had in the book, evidenced by his dyslexia and stuttering, would not come across on film, and then came to realize that although he had no great verbal acuity, a kind of dignity and gravitas would see him through.

She is correct. The gravitas that Gabriel Byrne captures for the enigmatic role of the Mechanic gently radiates through each scene. We do not trust the Mechanic much. Nor does Smilla. We do listen to him, though, with his solemn voice and his habit of beginning each sentence, as though he must have a touchstone, with the word “Smilla…” And, slowly, like Smilla, we allow him to guide us as the mystery deepens. But his motives are cloudy and his manner too mild. What is he up to? Without knowing why, we recognize him as the calm center within the increasingly peripatetic story and the balance to Smilla’s emotional and troubled journey. And, perhaps without wanting to, like Smilla, we find we have fallen in love with him. 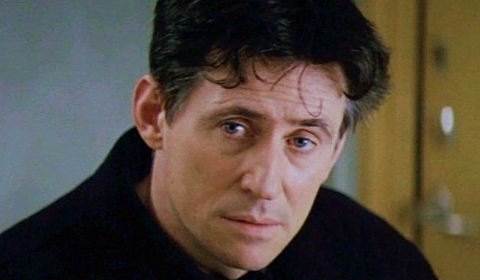 Roger Ebert is fascinated by this, too. He sees the story going haywire and the characters disappearing into the banalities of the action and he wishes the plot could just go away:

In a better world with more curiosity, we could have had this movie without any of the Greenland scenes. It could have been about Smilla and her neighbors. In our world movies need a plot, I guess, and so this one has one. Ignore it. It’s irrelevant to the movie’s power.

And he is correct, too.

The Smilla Mega Movie Page provides evidence of the Mechanic’s power with an array of videos, including the trailer and fan vids, dialogue and quotes from the film, promotional images, an interview, reviews, additional resources, a drink recipe (a good alternative to that hot chocolate!), posters, and a stunning set of screencaps.

Many thanks to Daniela, Aragarna, Stephanie, and CorFidele for their assistance in creating this tribute to Smilla’s neighbor, friend, lover, and savior, the Mechanic.