“The real miracle is that anyone believes anything.”–Father Andrew Kiernan in Stigmata

Doves. Candles. Shattering glass. Flowers. Dripping water. The hyper-realistic sound of metal breaking through flesh to hit wood. And blood. Pooling around gashes, sliding down cheeks, flying through the  air in violent droplets, floating on bathwater before finally sinking below the surface to turn everything dark red. Blood from wounds made by an unknown weapon.

Startling imagery such as this and a poundingly rhythmic and musically anarchic score make the film Stigmata difficult and frightening to watch at times, but it is no horror film.  It is, instead, an intense and  artistically satisfying mystery. The characters–Frankie, the young Everywoman besieged by a religious experience she cannot understand, and the dark-haired priest sent to debunk her–try to cope with the shocking and incomprehensible events that surround them. As they struggle, they latch onto our sympathies. We think: “These strange days could happen to anyone.”

Father Andrew Kiernan is the kind of priest a good atheist can relate to: a scientist by training, a compassionate and spiritual man by nature, and a very handsome guy, by the look on Frankie’s face. Gabriel captures the dual nature of the priest, showing us his drive for empirical proof one minute, his desire for human warmth and understanding the next. He is very strong, this priest–he never shows fear, he never wavers from his goal, and he does not let the phenomenon swirling all around him shake him from his search  for the truth. Gabriel shows us his other side, too: the crinkly smile and the shining eyes of a man who can laugh at himself and the human predicament. The priest begins the film and he ends it, almost on the same note, in the act of discovery, searching for meaning, for understanding, for the truth. It’s a wonderful role for someone raised as a good Catholic boy in Ireland, someone who knows what being a priest actually means. 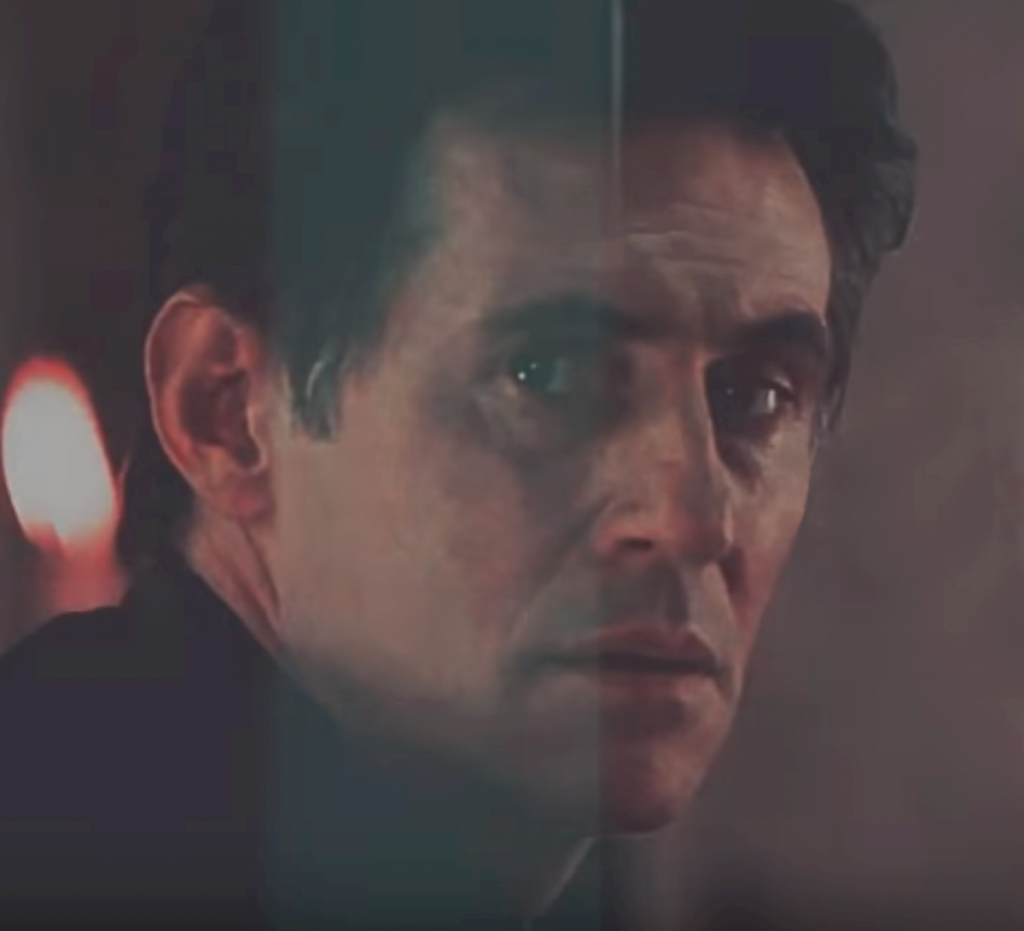 One feels a frisson, though, watching Stigmata now. Revelations that Gabriel has made about his experiences at seminary, his abuse at the hands of the Christian brothers, color the film, not completely, but with a tinge of regret, a sadness that Father Andrew would understand. Seeing him in his priestly garb, celebrating communion, is a little unsettling. The conversation with Frankie– “I’ve exchanged one set of complications for another” –highlights the line drawn between priest and man; a line, noted by Gabriel in interviews, fabricated by the Church, not God. A line that is unnatural.

So, that frisson is there because we know these things now, but it is also there in the  script. The writers built in the attraction between these two characters. They wanted them, and their worlds, to collide. They wanted them to save one another. Perhaps this is what brought Gabriel to the role. We should not be so cynical as to think the possibility of overthrowing the Roman Catholic Church, implied in the film’s storyline,  interested him…

The reviews of this film almost never do it justice. Reviewers want to argue theology and scripture and Vatican policy and they tear into the film’s aesthetic sensibility with a vengeance. They even diss the actors! But Stigmata has its fans, and rightly so. You will find evidence of fan regard for this film in the Stigmata Mega Movie Page, where there are several creative and accomplished videos and one video review inspired by the film. And, as always, the requisite screencaps, reviews by film critics, quotes, blog postings, the script, behind-the-scenes features, and tons of links are available as well. Not to mention the Byrne-ing hot pictures of Father Andrew Kiernan. Oh, my.

To quote a blog posting about the film that sadly no longer exists: “Basically, if you have read this far, it’s clear that I love this movie too much. The end.” heart