The Irish in Hollywood–on TV3!

Update: Although the documentary itself seems to be unavailable for purchase, the book upon which it is based, Emeralds in Tinseltown: The Irish in Hollywood, can be purchased at Amazon.

The Holidays are here! And our first present has arrived.

This Saturday, Christmas Day, at 10:00pm, TV3 in Ireland will telecast The Irish in Hollywood, a new documentary.

The Irish in Hollywood summons up a cavalcade of legendary Irish stars, directors, producers, designers, writers, entrepreneurs, villains and beloved heroes who strode through a century of Hollywood history. This special TV3 documentary will tell for the first time the story of the Irish immigrants who were monumental figures in Hollywood from the earliest days. The stories of this rich cast of Irish Hollywood legends, including interviews from Pierce Brosnan, Gabriel Byrne, Anjelica Huston, Brendan Gleeson and Saoirse Ronan, charts a journey through the history of Hollywood from its genesis as the movie capital of the world in the early 1900s. Pivotal Hollywood milestones will unfold as the back-stories of these legendary Irish artists who were pioneers, founders and the creators of the town and the industry they call….The Movies!

An article in The Irish Television and Film Network tells us a bit more about Gabriel Byrne’s involvement:

Paul  [film-maker Paul Howard] was very much struck by the depth of knowledge many of his interviewees had as to the Irish heritage in Hollywood. One, in particular, surprised the filmmaker immensely: ” One of the things about Gabriel – and it was one of the most amazing interviews that I have ever done – was that we sat down to interview him about his life and career in Hollywood, but he went way beyond that,” he tells us. ” Gabriel was very knowledgeable – knowledgeable to such a degree that he could form very credible opinions on our topics.”

If we can manage a way to watch it, I am sure we all will be sipping our hot toddies around the TV, warming ourselves to the history of the Irish on the big screen in America. And it will be more interesting than another round of It’s a Wonderful Life, if you ask me! 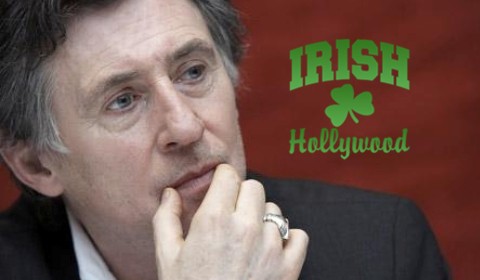