LostLily, our roving New York correspondent, has filed this report about the showing of Gabriel Byrne: Stories From Home at the Craic Festival:

So, he wasn’t at the screening. Terence Mulligan, who organizes Craic Fest, welcomed everyone, thanked the sponsors and then said, “Unfortunately, Gabriel Byrne couldn’t be here tonight.” But I truly enjoyed seeing the film. Gabriel is a great storyteller, and I never get tired of listening to him. The theater was very small and probably only had about 50-70 people in it. I think access to the after party was limited to movie ticket holders, so it was about the same number of people there. It felt a bit empty. They had a VIP section on the balcony, but opened it up to everyone pretty much right away — because there were no VIPs. So my friends and I sat in the VIP section, drank some free Jameson and free beer and appreciated the irony of celebrating a movie that talks about alcoholism and depression by getting drunk on free booze. Oh, well… it’s St. Patrick’s Day week after all.

Well, we hope he can be on hand for the showing in Boston in a couple of weeks. Still, sounds like fun, being a VIP in the absence of VIPs!

This Spring is full of activities!

One more time, with feeling! The 12th Annual Craic Festival runs March 11-13, with a showing of Gabriel Byrne: Stories From Home scheduled for Friday, March 12, at 7pm at the Tribeca Cinemas in New York City. The after party features a special guest DJ and open bar. Oh, and Gabriel Byrne will be attending. So, head over to the newly spiffed up festival website , check out all the features, and get your tickets.

The Irish Arts Center Spirit of Ireland Gala, held on October 2, 2009 was noted briefly in an earlier Byrneholics posting. There were, unhappily, never any photos available from the event. Until now! Thanks to Lara, that intrepid detective, we are proud to offer you these candid shots from the Gala. Enjoy! 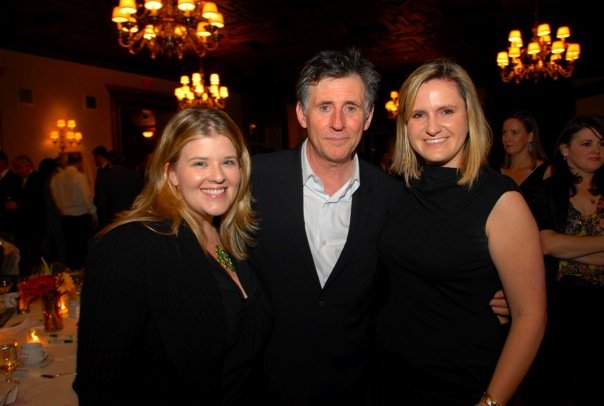 Horses: The Story of Equus: the IMAX DVD of this film, originally released in 2002 and narrated by Gabriel Byrne, will be available on June 8, according to the Warner Bros. online store. 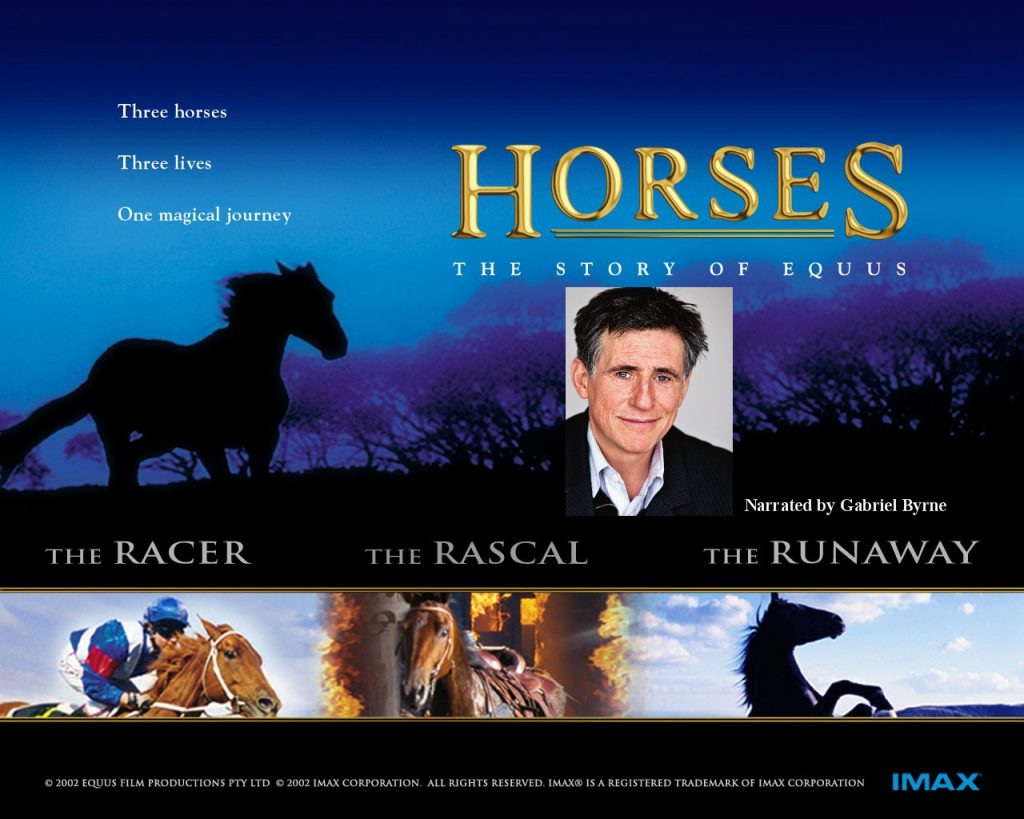 The official website for the film is no longer available, as of January 2018. It provided background information, the trailer, behind-the-scenes stuff, and some lovely wallpapers.

Here is a bit of the soundtrack by Australian composer Roger Mason, who says:

“Horses: The Story of Equus is a romantic and energetic film which elevates the spirit…I combined traditional Celtic music with the might of a seventy-piece orchestra to capture this feeling…”

The DVD is available for purchase at Amazon.

HORSES: THE STORY OF EQUUS is the story of three horses who were all born on the same night but their lives take very different paths. One becomes a racehorse and her story takes us into that extraordinary world, where the ancestry of every horse can be traced back to 1791 and where their overwhelming instinct to run is highly valued. The second is trained as an equestrian horse, an eventer. But this horse is a unique individual, stubborn and temperamental. After a spectacular failure in competition, he is trained again, this time as a stunt horse in the movies and it’s in that world that his capacity for learning and his individual nature triumph. The third horse goes on a completely different journey. He escapes from people and joins the feral herds in the wild. Out there, undisturbed by human contact, the horses revert to natural, herd behavior and this horse becomes our conduit into understanding what horses may have been like before we domesticated them.

Posting by Alison Nastasi on March 8, 2010 [This article is no longer available on the Internet]

Gabriel Byrne is one of our most talented performers. Yes, he’s appeared in some clunker films over the years (just like everyone else in Hollywood), but choosing his best role was easier than I imagined. People can (and will) make the case for films like The Usual Suspects and I can definitely see where the logic in that choice is. However, for me, it’s all about Miller’s Crossing. Byrne’s portrayal of a “prickly pear” of a man caught in the middle of a gang war embodies everything I love about the actor’s work in general: the smoldering intensity, the subtle nuances of his body language, his gift for making the most mundane dialogue sound cooler thanks to his accent and his ability to make even a deeply flawed character someone the audience can relate to. The role of Tom Reagan may not be a particularly daring choice for Byrne’s best role, but great work is great work and deserves to be celebrated. 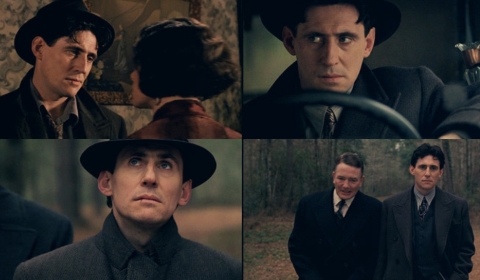 Thanks to Bowie28 for this lovely collage

Of course, I agree with her! Miller’s Crossing is one of my favorite films and Gabriel Byrne’s performance is entrancing, as Alison notes. David Thomson did say that Gabriel’s Tom Reagan was one of the greatest performances in American film, the whole melancholy act, and he is right about that.

Fast forward fifteen years, though, and you will see a performance that does not rely on the somewhat abbreviated palette of a younger actor, but rather the fully developed, powerful, and wide-ranging artistry of a man in full command of his craft, in a wonderful film that could not stand on its own without him, Richard E. Grant’s Wah-Wah. This, I would argue, is his best role in film (so far) and I’ll have more to say about it soon.