The Cultural Ambassador for Ireland has been popping up in all sorts of interesting places in the past few weeks, both in the US and in Dublin. Galas and fundraisers are part and parcel of his life now and actually always have been. These recent appearances are just like the movies: All Music! All Dancing! All Archeology! Well, pretty exciting, anyway. And, as you know, in the midst of this storm of activity, he celebrated a milestone birthday on May 12. Read on.

We forget that this was one of the areas of study Mr. Byrne focused on during his undergraduate years. Armed with this (perhaps somewhat rusty) knowledge, he attended the second annual Ancient Gala on Wednesday, April 28, at Guastavinos in New York City, hosted by the Boston-based Archaeological Institute of America. AIA Executive Director Teresa Keller welcomed Jordan royalty and honorary chairs HRH Princess Dana Firas and HRH Prince Zeid Al-Hussein, authors Raymond Khoury and Julie Powell, and our favorite cultural ambassador. The theme was Peru and, judging from the pictures, it was indeed an exotic evening, including a Peruvian Feast. Enjoy the pics below, especially noting the beautiful, if somewhat precarious, flowers. 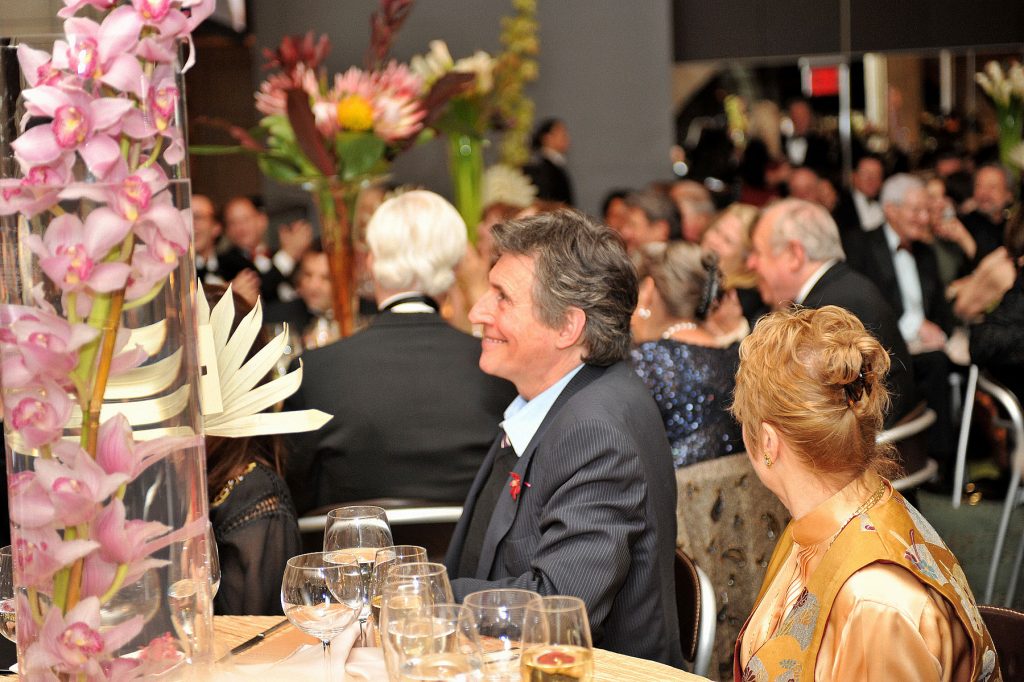 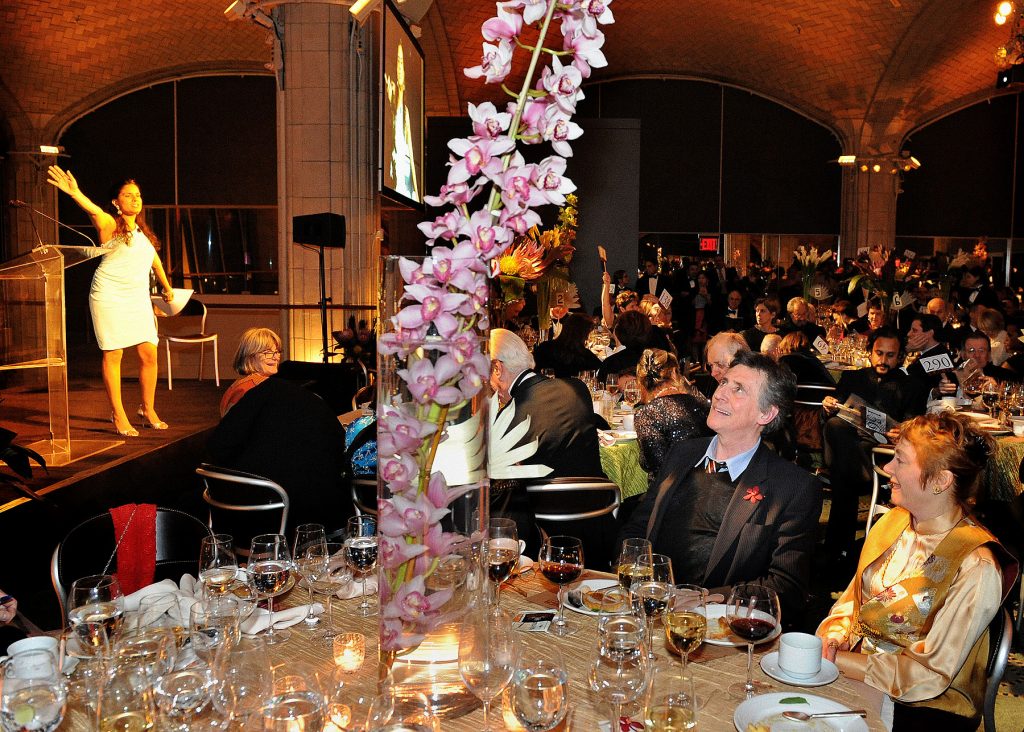 Is it leaning? I think it’s leaning…

An elegant setting for an ancient evening 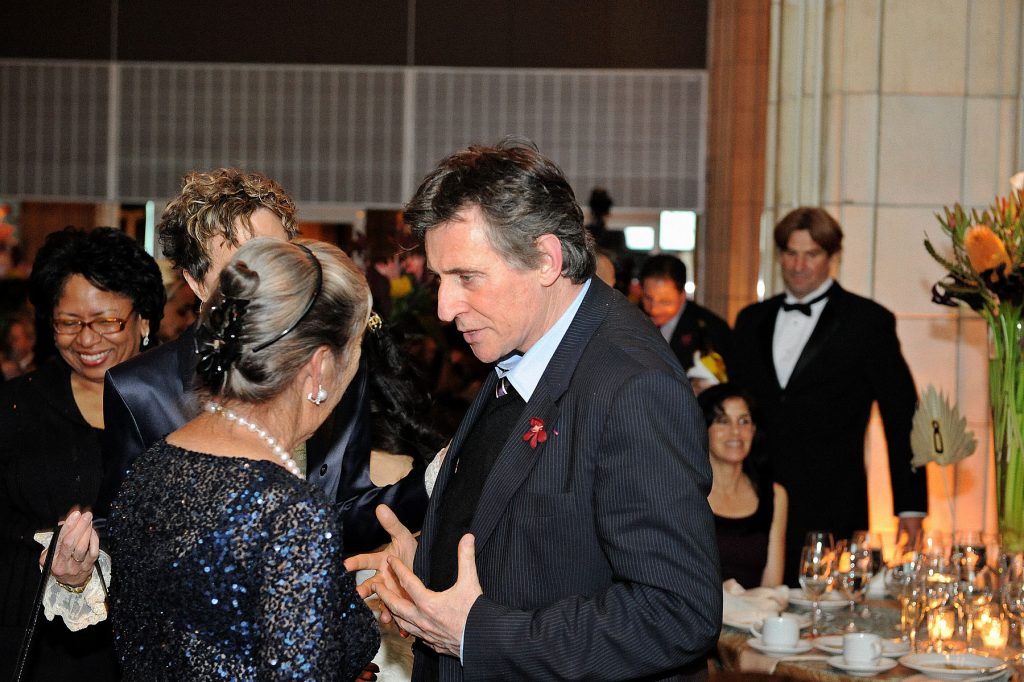 Peru is fascinating. I did not realize a Peruvian Feast involved chicken!
And speaking of Egypt, did you know the Irish originated there? No? Well…

Gabriel’s love of music (we know he plays the accordion, and not badly) must have made the American Ireland Fund New York Gala a real treat. Bono was the honoree and and he spoke at length about the importance of music education and Ireland’s pressing need to support it. Another musical great, President Bill Clinton, also waxed rhapsodic (in his case, the saxophone was key) and the Mayor of New York seemed musically inclined as well.

U2’s Bono joined President Clinton, Mayor Bloomberg and 1,300 members of the Irish-American business, political and arts communities at the American Ireland Fund 35th Anniversary New York Gala at the Lincoln Center Thursday [May 6, 2010] to raise $3 million for Irish and Irish-American projects. Despite the economic downturn on both sides of the Atlantic, this year’s special anniversary gala – one of the largest annual events of its kind among the global Irish Diaspora – surpassed The American Ireland Fund’s target of $2.5 million.

Bono’s speech was very funny, from all accounts, and he is obviously committed to increasing support for music education in Ireland, the focus of his comments. 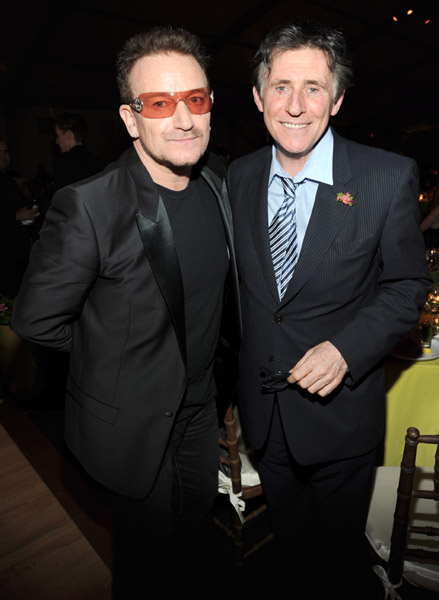 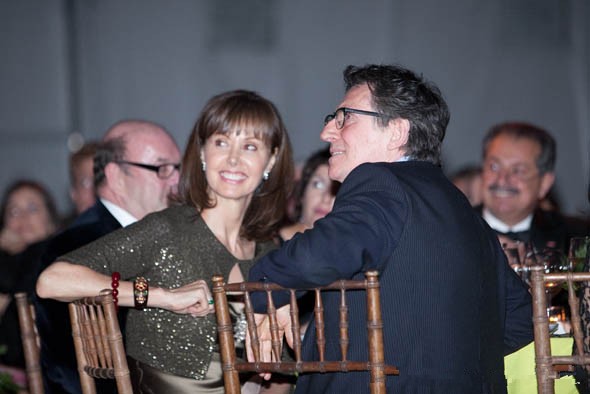 This might be the part in Bono’s speech in which he imitates Einstein. Not kidding! 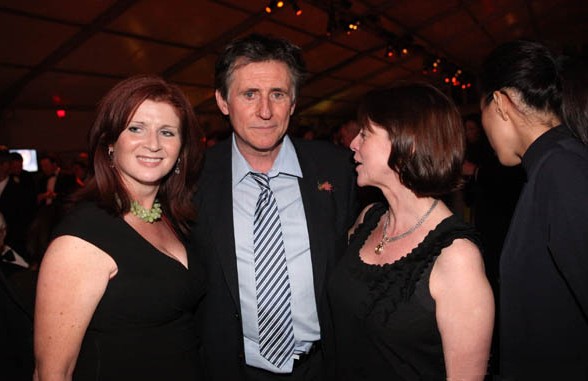 What’s the little red flower all about, Mr. Byrne? 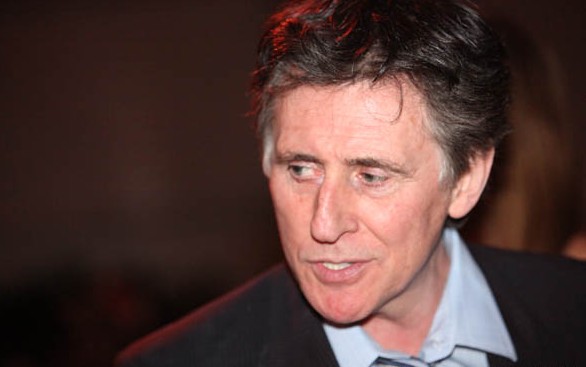 The (So-So) Dancer Spends the Day in Dublin

Mr. Byrne attended the world premiere of the dance Day, performed by Jean Butler (of Riverdance) at the Dublin Dance Festival on Wednesday, May 19.

Dublin Dance Festival and the Abbey Theatre are delighted to co-present Jean Butler in an engaging new work by Tere O’Connor. Jean asked Tere to create this solo for her, one which departs from her long history and training in Irish Dance. Entitled DAY, the piece explores the ways we come to know a person beyond the narrative of his/her life. It questions how much we can really know someone and if our projections constitute our knowing more than the actual truth.

Sounds a tad intellectual for a dance, but just the thing for Mr. Byrne.

A trifle tired in these very tiny pics, perhaps,
but we chalk it up to a very busy schedule with a hint of jet lag.

The Harbinger of Summer?

This just in: Spring had definitely sprung in most of the USA, and summer in a few parts, attributable to some degree, we like to think, to Mr. Byrne (check out his effect on all those flowers at the AIA gala!) and now Byrneholics in Europe report that there was a noticeable increase in the temp there once Gabriel made it to Ireland. He seems to have brought summer with him! 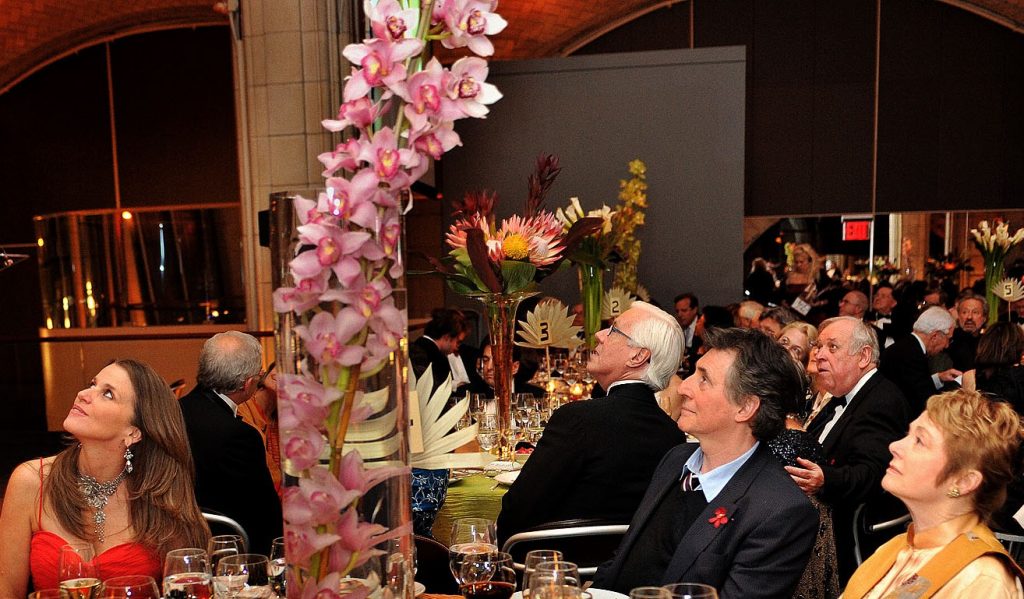 A Dublin bad boy proves his essential goodness under the worst possible circumstances in Perrier’s Bounty, a splendidly plotted if thematically unsurprising comedy. The pleasure comes not from fresh insights, but from a droll script and expertly timed performances. (from a review of the film at NPR)

The Reaper never appears, though he offers salty musings from the beyond in the voice of Gabriel Byrne.

Read the NPR review for more info on this intriguing film.

We love salty musings from Gabriel Byrne, of course, even if we cannot see him musing on the screen. The film is making its way through the festival circuit now.

From the folks who brought you Played, here is a crime thriller involving a heist that should happen clean and fast but, guess what? It doesn’t.

The best laid plans of slugs and thugs can go dead wrong, and they do in this brutal heist movie. Four career criminals decide to knock off a boutique hotel at exactly 2:22 a.m. on New Year’s Eve. They figure everyone will be drunk or out of it. They figure right, but that’s the crazy factor that explodes on them in this neo “Dog Day Afternoon.”

Check out the rest of the review at The Hollywood Reporter. Gabriel plays Detective Swain in an uncredited appearance. After showing at several festivals, including Cannes 2009 and Toronto 2008, the film will soon be released on both Blu-ray & DVD, with a US release date of August 31 of this year. 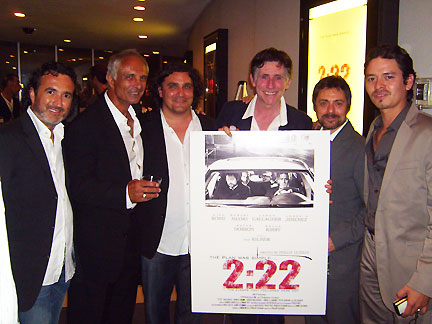 Last, but certainly not least, word on the street is season 3 of In Treatment goes into production in New York City in June. 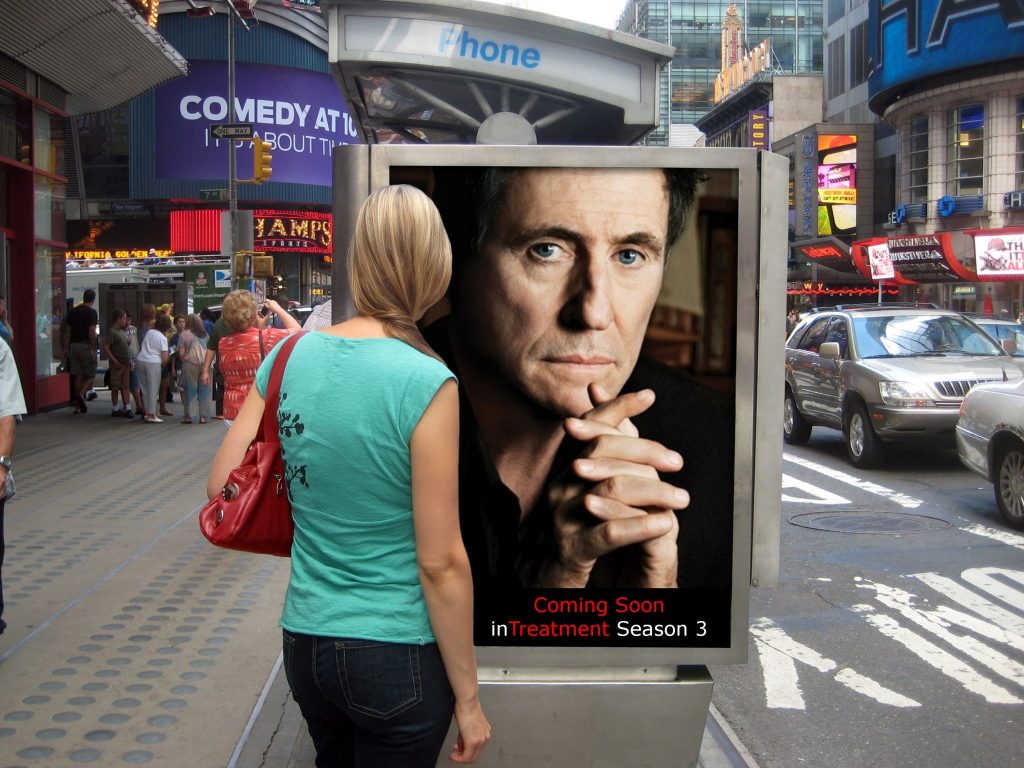 We next expect to see the Cultural Ambassador for Ireland at the Picture House in Pelham, New York on June 12, celebrating the 20th anniversary of one of his best films, Miller’s Crossing (see previous Byrneholics reporting on this). In the meantime, we hope Mr. Byrne is holed up somewhere nice, running lines with his new co-stars and preparing for his third turn as Dr. Paul Weston, although it is just as likely that we shall see him out and about carrying the flag for the Irish arts!

Thanks to Byrneholics everywhere for sharing news and pictures of our peripatetic Irishman.