[Under the menu heading “Gabriel” at the top of this page is the subheading “Cultural Ambassador.” Click it and the list of postings about his work as Cultural Ambassador for Ireland will pop up. Then you will see just how darned busy he has been!]

Yes, apparently it is true. Gabriel Byrne, the first Cultural Ambassador for Ireland, is stepping down. Two years into his three-year appointment and he is saying “Enough!” I do not blame him one bit. I suspect he has purchased stock in multiple airline companies because the man defies the laws of physics on a regular basis, appearing in at least two places at the same time at least once a week…or so it seems. It can’t be easy.

The story broke in The Irish Times with a rather personal-interest-story kind of headline:

‘I did this work for free because I believe in it’

GABRIEL BYRNE lives in New York but keeps abreast of Irish news. Reading the paper’s front page last week, he was shocked at a report that former archbishop of Dublin John Charles McQuaid was the subject of two child sex abuse complaints, although perhaps not surprised. 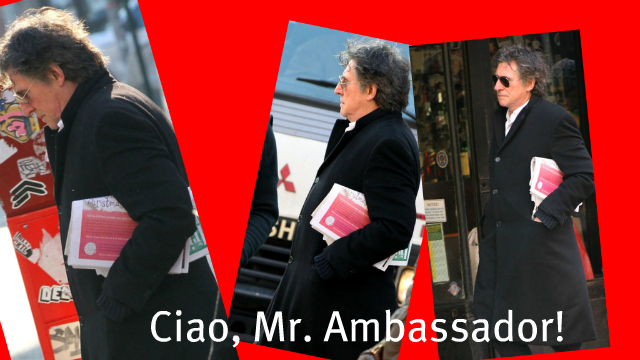 The ambassador in SoHo

“If a criminal is in charge of the Catholic Church, what hope was there for the rest of it?” Byrne asks. “It’s an endless story.”

The moral quandaries in the relationships between church and State, institution and individual, lie at the heart of James X , a play that opened on Friday in the Culture Project theatre in Bleecker Street.

Written and performed by Byrne’s long-time friend Gerard Mannix Flynn, it is a semi-autobiographical account of Flynn’s experiences of physical and sexual abuse during periods of incarceration in church-run institutions. It is co-produced by Liam Neeson and marks Byrne’s debut as a director in theatre.

One of the most important achievements of Mr. Byrne’s ambassadorship has been his ability to expand our perceptions of Irish art–literature, theatre, film–and to include the politically controversial with the traditionally comfortable. So, he curates a film festival that explodes the myth of Ireland given to us by John Ford in The Quiet Man one minute and makes his stage directorial debut with a play that offers the truth about child abuse in his home country the next.

…For Byrne James X is an important addition to the repertoire of Irish drama being performed in the US. Byrne wants the play to correct stereotypes that may exist in the minds of American viewers about Ireland and to complicate their understanding of Irish identity.“The story of Mannix is really the alternative narrative,” he explains. “It’s not The Quiet Man , it’s not Riverdance , it’s not U2.”

The final events for Imagine Ireland cover the waterfront from Beckett to Enda Walsh to Mannix Flynn, with performances by Flynn, Cillian Murphy, and John Hurt. Reviews for all three plays have been largely favorable, with Cillian Murphy getting raves for his portrayal in Misterman. What an array of stories and performances to close out this year of Irish arts in America. And James X in New York City really does make the year go out with a bang. A big, eye-opening, truth-shouting bang.

As the cultural ambassador for Ireland in the US since early 2010, Byrne has played a central role in Imagine Ireland, a year of Irish arts in America sponsored by Culture Ireland. He has organised several events that explore the national identity, including a retrospective of Irish film at New York’s Museum of Modern Art and a series of documentaries about Ireland at the prestigious Lincoln Center.

The Irish government invested €4 million in Imagine Ireland, but his voluntary position cost about $4,000 (about €3,000), which he says just covered his expenses. As he puts it: “The fact that I’m kind of well-known opened doors.” He says he’s assessing his role, originally due to last for three years, because of the pressure of balancing the work with his career. “I will probably be resigning this year because I just don’t have the time between my career and that.”

So his role is going to come to an end this Christmas? “Yes, this will be the end product. I wanted to go out with a statement that was personal to me about the Ireland of the last 50-60 years. That’s really what attracted me to this play as well I think. it’s a profound piece of theatre.”

It has been a lot of fun (and also some hard work) to report on the Ambassador’s doings over this past 2 years. I’ve pored over more Global Irish Economic Forum PDFs, looked up more Gaelic words (“taoiseach,” anyone?), and posted more event pictures to the Gallery than I ever thought possible. Every time I was ready to embark on another Mega Movie Page (why is there no page up for End of Days, you ask?), Mr. Byrne would show up at some new event that he had forgotten to tell me about (Just kidding. We are not in touch. Seriously.) and I had to drop everything to cover it. Or try to! So, imagine how he must feel. It is so rewarding, though, to watch him operate at this totally different level–he is artist/academic/provocateur/politician as Cultural Ambassador and it is quite difficult to think of another person who could wear that many hats happily. 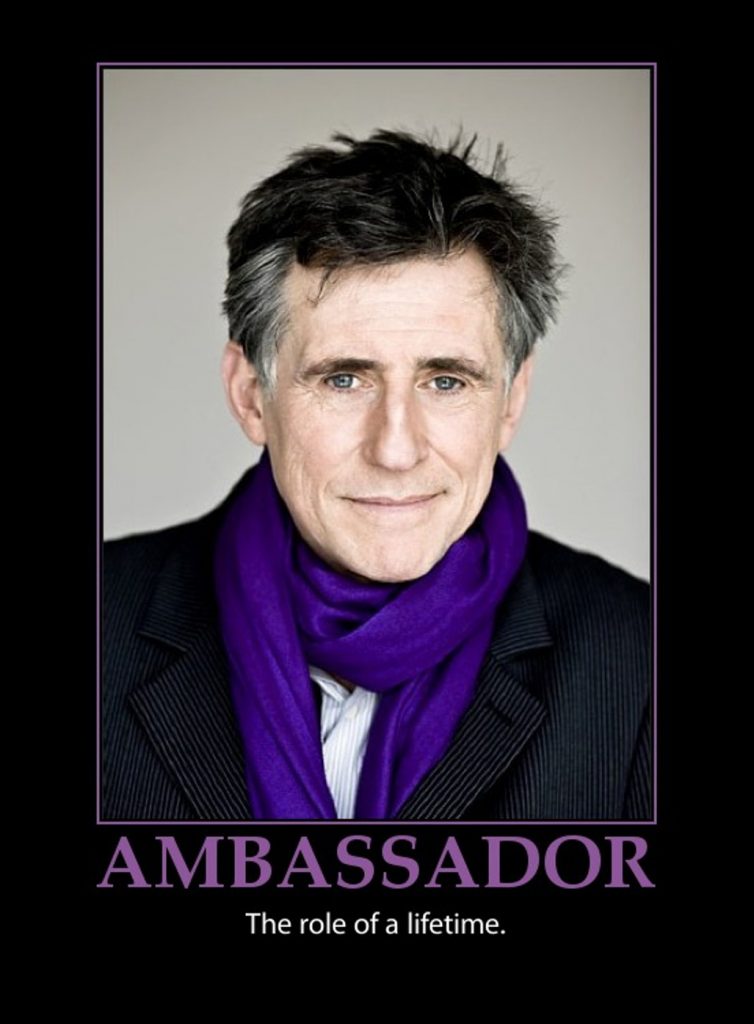 The Minister for Arts, Jimmy Deenihan, describes Byrne as making “an outstanding contribution to the country” in his role. “His inspirational leadership of Imagine Ireland is helping to restore Ireland’s reputation at a critical time, breaking new ground for the next generation of Irish artists and helping them to find new audiences for their work in the US. Gabriel is a passionate advocate for the arts and for Ireland, and he brings enormous energy, vision and charisma to the role of Cultural Ambassador. The doors he has helped to open for Ireland and Irish artists in America this year offer huge opportunities for the years to come.”

James X is the last theatrical production in the programme, and Byrne wanted to go out strongly – to offer “an alternative voice to reach a contemporary American audience”.

It is great to see the Ambassador receive the recognition he deserves for all that he is done over the last two years. While the work might have been fun, it was also time-consuming and detailed and seemed to require a great deal of hands-on attention and what is usually called “smiling and nodding.” And did I say time-consuming? The Minister notes that Mr. Byrne “brings enormous energy, vision and charisma to the role.” Yes! But I am glad to see him bring his “energy, vision, and charisma” back to the big screen, personally. Perhaps directing James X is the perfect segue back to life as an actor.

Flynn and Byrne became friends in the 1970s when they worked together at the Project Arts Centre in Dublin, along with Liam Neeson and Jim Sheridan, who attended the opening night performance. Flynn describes this production as “a reunion of a number of people”. Of Byrne he says: “Gabriel directed the piece very sensibly and very well. He’s a person I would trust…”

For Byrne this is a testament to the universal relevance of James X , which shows that people will do almost anything to protect an institution to which they are loyal. The issues the play brings up are intended to evoke deeper questions of public acquiescence to authority, especially in religion, politics and the economy. Byrne draws a distinction between inertia and apathy, but describes the Irish relationship to authority as “weird”.

And it is interesting to note that the role of Cultural Ambassador might afford one a bit of power to say “Hey! You know what? I think we should do James X in New York. It think it is time. What a way to close out this….” “Now, Gabriel,” someone would respond, and the Ambassador could just say “Jaysus! We’re doin’ it!” He is going to miss that.

Words like “revolution,” “crisis” and “transformation” pepper Byrne’s conversation about politics. He complains about capitalism’s tendency to enrich the wealthy and penalise the poor, and praises the pro-activeness of Occupy Wall Street. “That reaction has grown out of anger and it’s grown out of injustice and it will not go away despite the police and the tear gas and the arrests,” he says. “I think that there’s hope in the Occupy Wall Street movement – that’s where I see hope.”

This is Gabriel Byrne. Not Ambassador Byrne or Actor Byrne or Director Byrne. He will be saying this stuff until no one wants to interview him anymore–many, many years from now.

“I can’t honestly say to somebody who’s on the dole that the arts are terribly important, because it’s not an argument that will stand up to somebody who has to put food on the table. On the other hand I do believe, as this play testifies, that there is an answer in art. It lifts major issues out of the present day and puts them in the realm of interactive experience with an audience, and audiences are changed as a result.”

It is interesting that two artists who have had similar experiences can feel differently about their art or even the artistic process itself. I think Mannix Flynn believes art is helpful, but it does not heal the wounds that one might have suffered, either physically or psychologically. Gabriel Byrne, on the other hand, often says that art heals. One of the useful by-products of this year of Irish arts in America has been the almost constant dialogue occurring around these important issues: what is the role of art in today’s society? What is the meaning of our artistic expression? Where does the audience fit in to our notions of theatre and stage? Can there be positive relationships between the artistic and business communities? How do we continue what we have begun?

To Byrne, the emotions in plays such as Seán O’Casey’s Juno and the Paycock are the same as those that simmer today – anger about poverty, class and the disparity between rich and poor. Then there’s the matter of sex.

“The people who started the real investigation into Ireland and its true identity were people like John McGahern who wrote The Dark and The Barracks , and Edna O’Brien,” he says. “These were people who lifted up the rock and showed that there were maggots underneath, and it wasn’t the world of The Quiet Man any longer.” 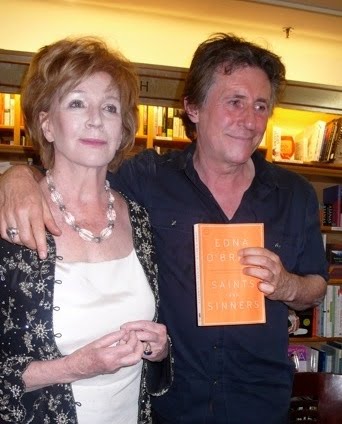 I remember the reading he did with Edna O’Brien last summer. How wonderful to see him acknowledge a fellow artist so warmly: “I read your work to find myself.” We can hope that he will continue to immerse himself in activities like these, where he can share with peers and share with us, though not as Cultural Ambassador, but as Citizen-Artist Byrne.

At a party following Friday’s opening night of James X , at the B Bar around the corner from the theatre, Byrne circulated amongst guests and made introductions, playing the diplomatic role. “I essentially did this work for free,” he says of his role as cultural ambassador, “because I believe in it.”

And I essentially kept up with you, Ambassador Byrne, while you were doing this work, because I believe in you. It has been a privilege and an honor to report on your inspiring journey. And now I’ll keep track of you while you go make a movie, ok!? 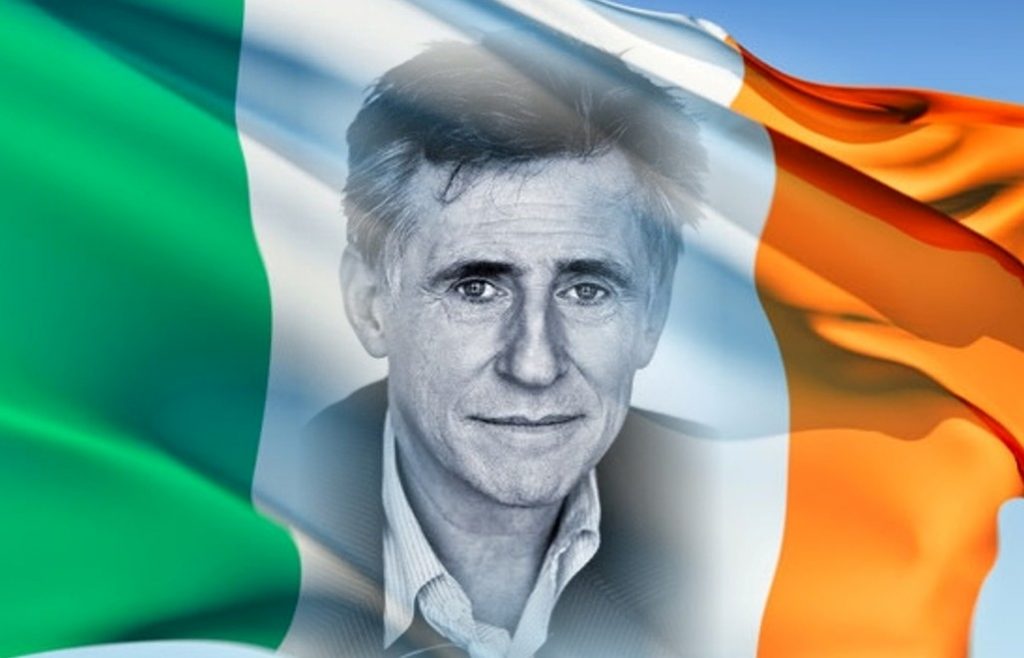