Updated: the unofficial transcript from the unofficial video of Mr. Byrne’s speech is now at the end of this posting. Some audio is missing,  but what’s here is pretty inspiring, so enjoy!

The official launch of the year-long initiative, Imagine Ireland, occurred on January 7 at Lincoln Center in New York City. Gabriel Byrne, Cultural Ambassador for Ireland, spoke and inspired everyone to think about all of the arts, including those from Ireland, of course, in a new and enthusiastic way. Below you will find links to articles about the event in the Irish and US press, pictures from the event, the unofficial video from the event (which has some sound tracking problems, so be warned!), and (soon) a transcript of Gabriel’s speech.

To get things started, though, I thought a reminder of what this is all about would be appropriate, so here is the official website and Gabriel’s welcome at the website. 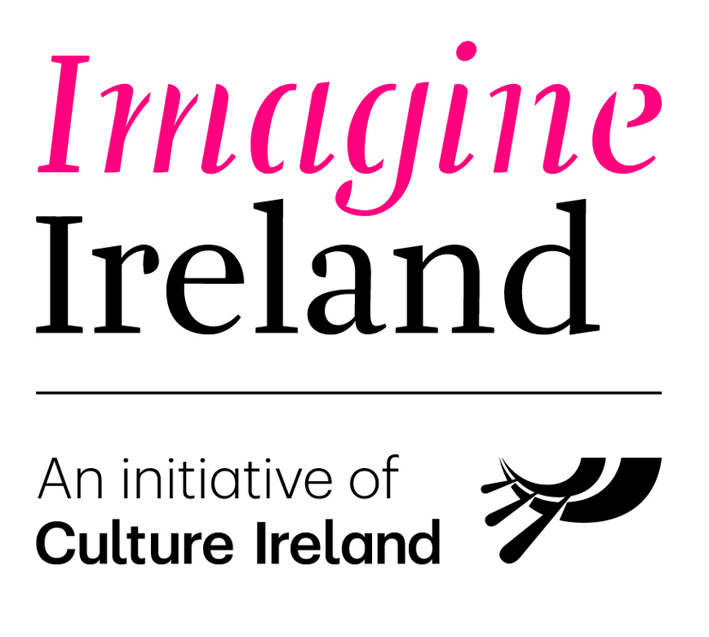 From the About page [the official website no longer exists]:

A celebration of imagination

This programme of events is a celebration of the Irish imagination. But it’s a challenge too. Imagine Ireland. Imagine.

The Irish have answered that challenge in many different ways, imagining in stone, in words, in music, on film and on the stage. In the process they have enriched the world around us – our art, our writing and music, our theatre and our film.

The creative Irish mind has always found some of its richest inspiration in America – think today of the music of U2 or the writing of Colum McCann. Think too of the plays of Eugene O’Neill and the films of John Ford, whose film “The Quiet Man” is one of the most memorable and influential responses by an Irish American to the challenge to “imagine Ireland”.

John Lennon, the grandson of Irish emigrants to Liverpool, reminded us how the imagination can interpret and reshape the world around us. That audacity is common to many of Ireland’s finest artists. William Butler Yeats founded the Abbey Theatre with the aim of re-imagining Ireland for the twentieth century. James Joyce’s objective in his writing was nothing less than to “forge in the smithy of my soul the uncreated conscience of my race”.

That work has been picked up by each succeeding generation and it continues today. This programme is an opportunity to encounter some of that creative daring.

So take up the challenge. Imagine Ireland for yourself. 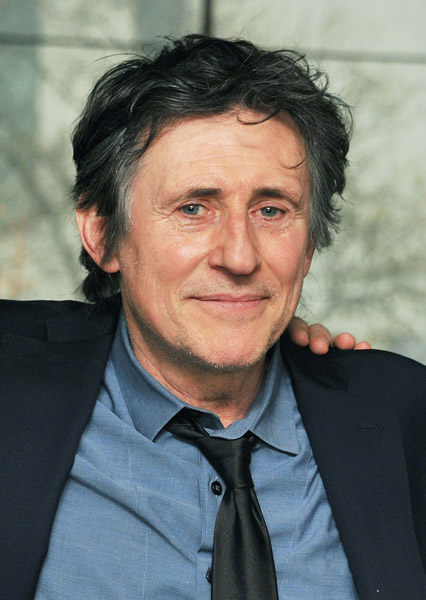 Images from the Event 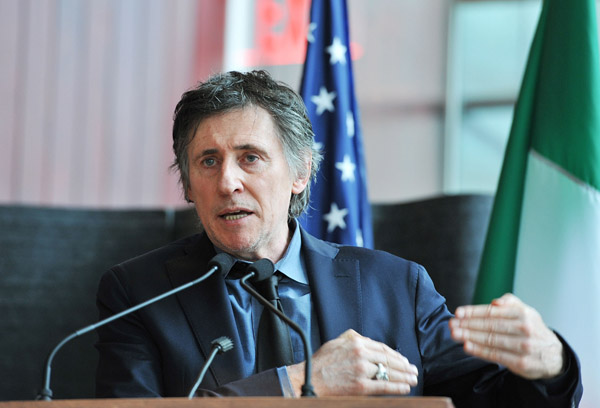 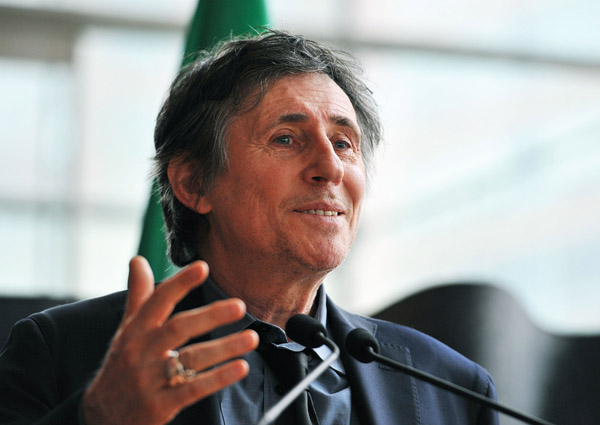 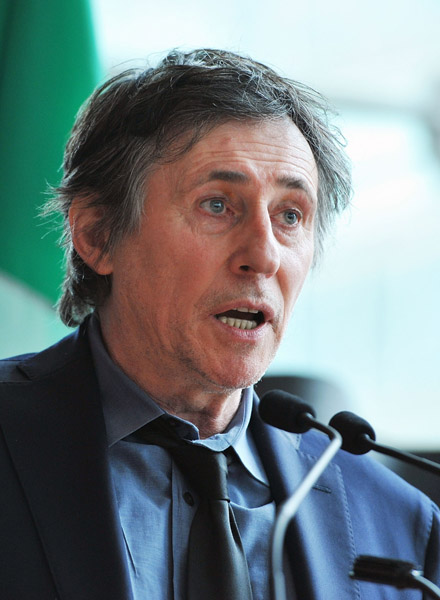 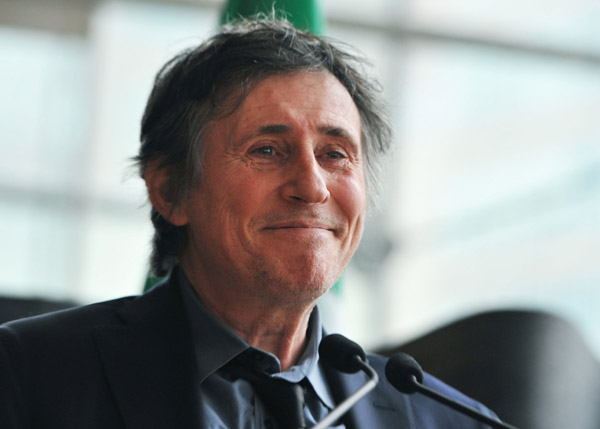 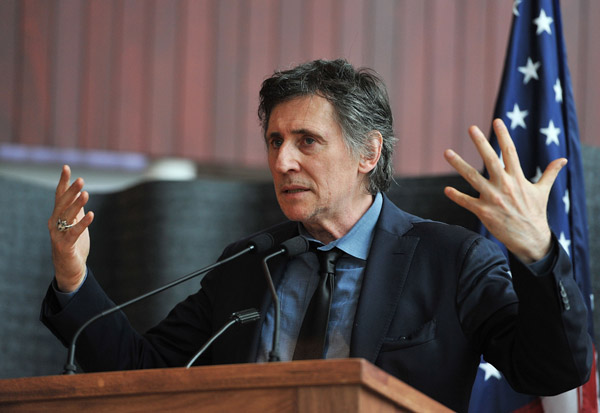 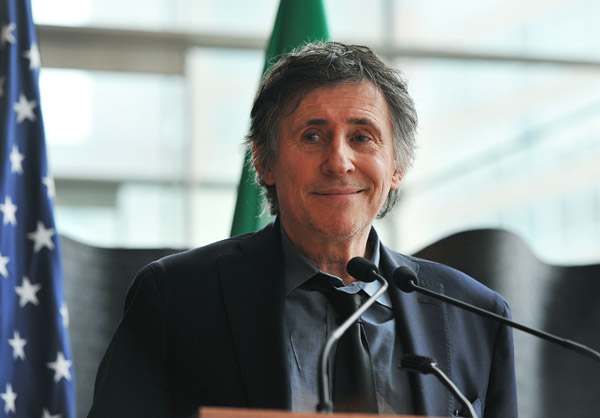 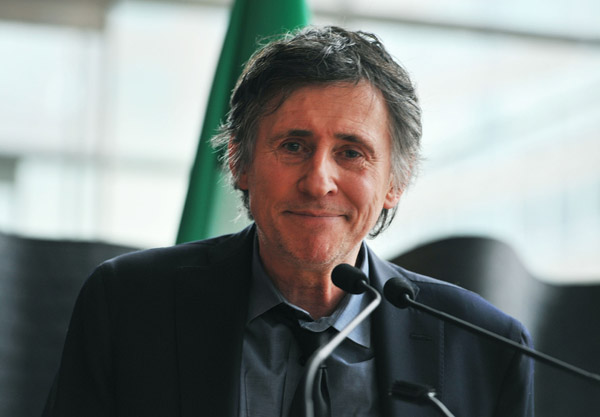 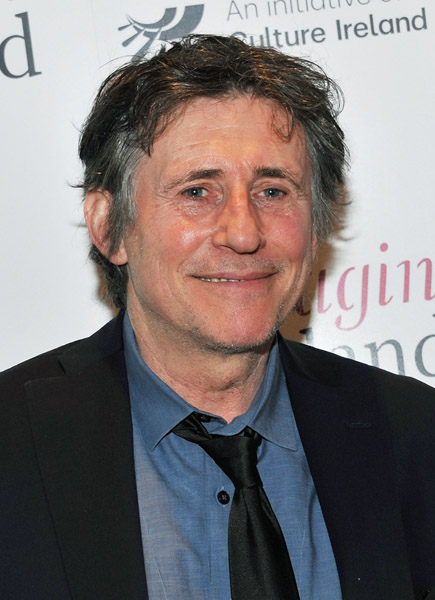 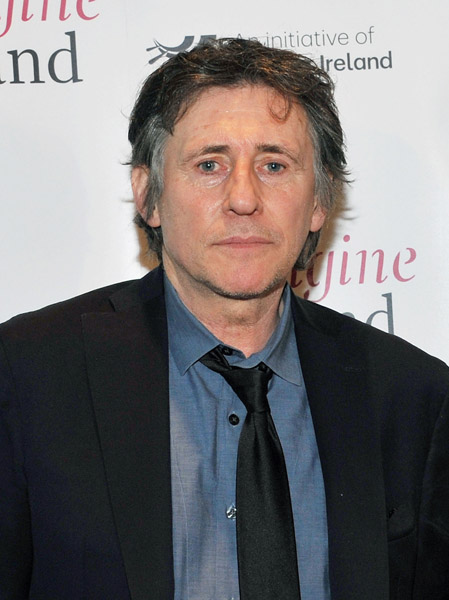 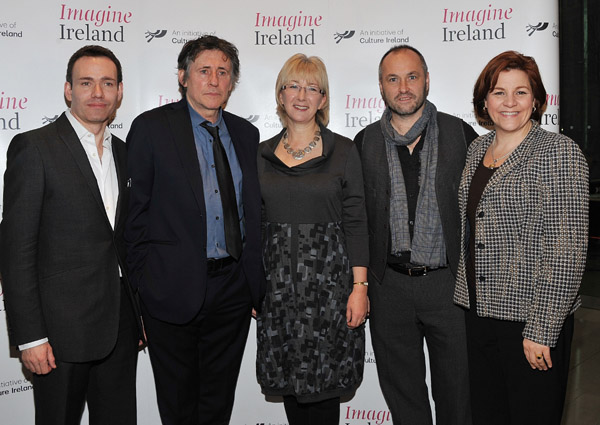 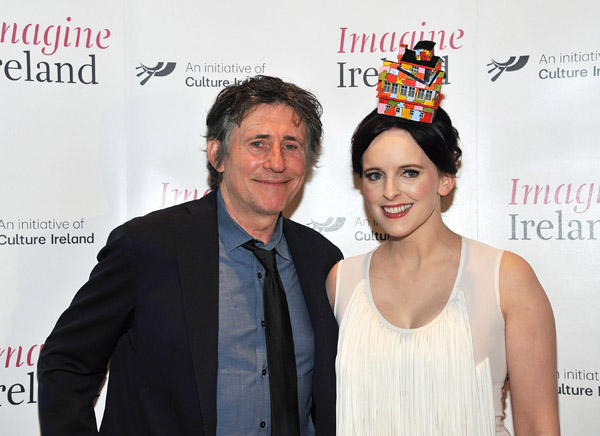 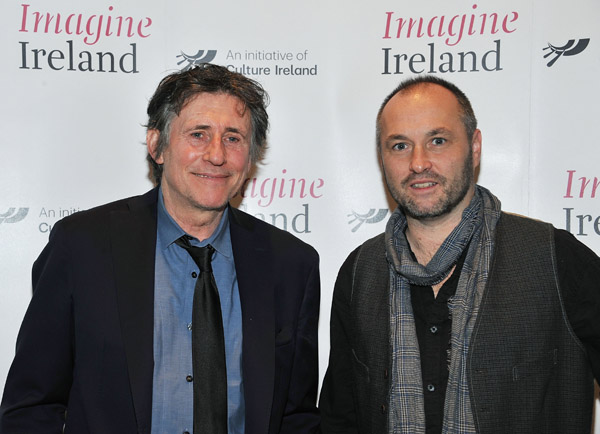 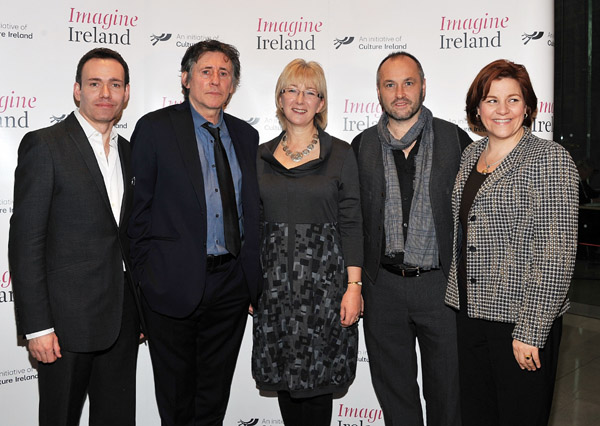 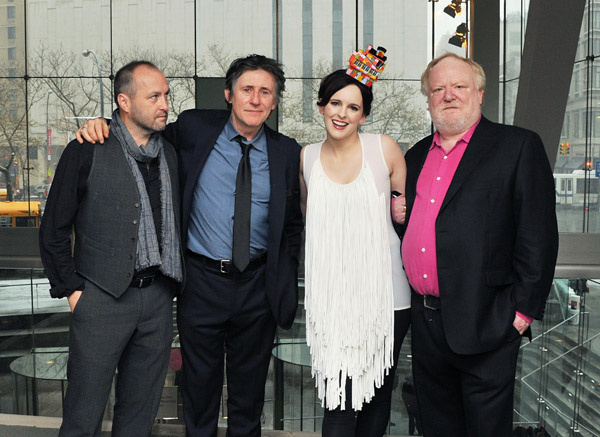 Colum McCann, Gabriel Byrne, Julie Feeney, and someone I do not know. Sorry!

The Irish Examiner: Byrne launches largest-ever scheme of Irish arts events across the US

About Mayo/Local News from the West of Ireland: Irish artists showcase best of Irish arts in New York [This article is no longer available on the Internet]

Irish Times.com: Ambitious display of creative talent asks US audiences to imagine a better Ireland [this article is now behind a paywall]:

Mr Downes said Imagine Ireland “reflects the arc of Irish culture through time, but it is also a highly contemporary exploration of that”.

Over the next 12 months, Mr Downes hopes Imagine Ireland will “preserve this extraordinarily deep circle of influence and identity, and tell the next chapter of that story”.

Politics and religion betrayed Irish optimism about the future, Byrne said. “But there is an optimism about art that is really powerful. When Yeats founded the Abbey Theatre, he saw it as much as a political movement . . . Art is in the end the most powerful agent for change.”

There was something “oddly patriotic” about his friend Byrne’s extraordinary efforts to promote Irish culture, McCann said. He credited Mr Downes with the idea of putting what were “scatter-shot efforts” by himself and Byrne “under one umbrella”.

Irish Central: Gabriel Byrne says Irish have a ‘right to feel betrayed’…Actor speaks out about recession, role art must play

US and Other Press

Transcript of the Launch Event

A very special tribute to our cultural ambassador, Gabriel Byrne. Gabriel has given of his time, of his energy, of his commitment. More particularly, he’s created a vision, his thoughtfulness, and his belief in Irish culture and in the Irish people. And he is the one who is spear-heading this throughout the United States and I want to pay a very, very special tribute and thanks to Gabriel Byrne for taking on this role and for doing it so beautifully and so wonderfully on behalf of the people of Ireland. So to Gabriel, thank you, we really appreciate what you’re doing for Ireland.

Thank you so much. Thank you to the Minister for her words, and Eugene and Christine.

It’s very, very exciting to be here this morning and to see the work of the last two to three years becoming real. Imagine Ireland began as an act of imagination and its reference point for me was John Lennon’s anthem to action, “Imagine,” in the belief that, if you imagine something, you’re a great deal of the way towards achieving it.

In Ireland, around the world, we’re justly famous for our tradition. We’ve had a tradition stretching back, pre-Christian, an incredibly sophisticated Druidic society which we don’t know that much about, but from the incorporation of Christianity to the incorporation of other outside influences–the Danish, the Norman, the monumental re-imagining of a language that gave rise to the Anglo-Irish tradition of Yeats, Joyce, Wilde, O’Casey, Shaw, Beckett–a constantly evolving culture. A culture that doesn’t evolve, dies.

We have a capacity to incorporate and to find an authentic voice within ourselves, even in our moments of greatest despair, an inner voice, a spiritual voice in a world that’s maybe been disillusioned or been betrayed by politics or religion. Optimism and hope is provided by the artists, who look back to that past that we’ve inherited that we can draw upon. But our ambition as artists is to find our new authentic voices and this is the generation that’s doing it.

On the one hand, you’ve got The Abbey, who connect Ibsen with our national theatre. Joyce was hugely influenced by Ibsen. “John Gabriel Borkmann,” for example, is a play that may have seemed unfashionable five, ten years ago. Its themes could not be more relevant today. To put Ibsen and The Abbey Theatre together, and to put it on in New York City makes a huge statement.

Every artist has the power to transform reality. That is the reality of politics, the reality of religion, the social reality. In fact, that’s the job of the artist–is to be anarchic, is to question everything and out of that questioning to redefine a new reality and to a great extent the traditional modes of expression. We are now in the age of Twitter, YouTube, Facebook, and this will change the way we make art, which is in the public domain, and make it as available as possible, to as wide an audience as possible. How could we do that?

And I thought if we could put those guys on YouTube maybe it will bring a newer audience to the story that we already know. It didn’t cost a lot of money to be honest, but what it did require was imagination. The vision to see the future incorporates the notion of technology. Because what you’re going to see now is the emergence of the arts from Ireland is the rise of a hybrid culture–rap influencing poetry, the visual arts influencing theatre, the cross-over of various forms of expression. You can now go out in a village in Ireland with an Icamera and make your own story.

…and then there was Beckett, Joyce, and O’Casey, and then there was U2, and it kinda stops there. And there was a couple of films made, but that’s not true. Ireland has consistently and uniquely been making art and this platform that we have devised here with this program is a platform for those artists to connect with the rest of the world. Because what great Irish artists do, like any great artist, is they speak from the personal to the universal. And finding our unique voice now, especially in these difficult times, artists can lead the way. In fact, they are leading the way.

Go to that website because all of the information is there. If you have access to that thing–what’s it called?–anything that gets the message out, send it to your friends, word of mouth, Twitter, you know what I mean, Facebook, all that stuff. That’s the way we’re going forward.

WALKING WITH GHOSTS COMES TO BROADWAY IN OCTOBER! Click to get tickets!