Gabriel Byrne at the Movies

Gabriel Byrne has five, yes, five films in the pipeline at this time:

And now for tidbits about each and every one of them!

News on the I, Anna front is scarce. What we know for certain is that the film, which co-stars Charlotte Rampling, is in post-production and has a reported release date  in Europe of November, 2012.

However, Ms. Rampling has a film out now: a documentary about her life entitled Charlotte Rampling: The Look. The film played at DOC NYC, New York’s Documentary Festival on November 3 and here are some pictures of Ms. Rampling with our usual suspect: 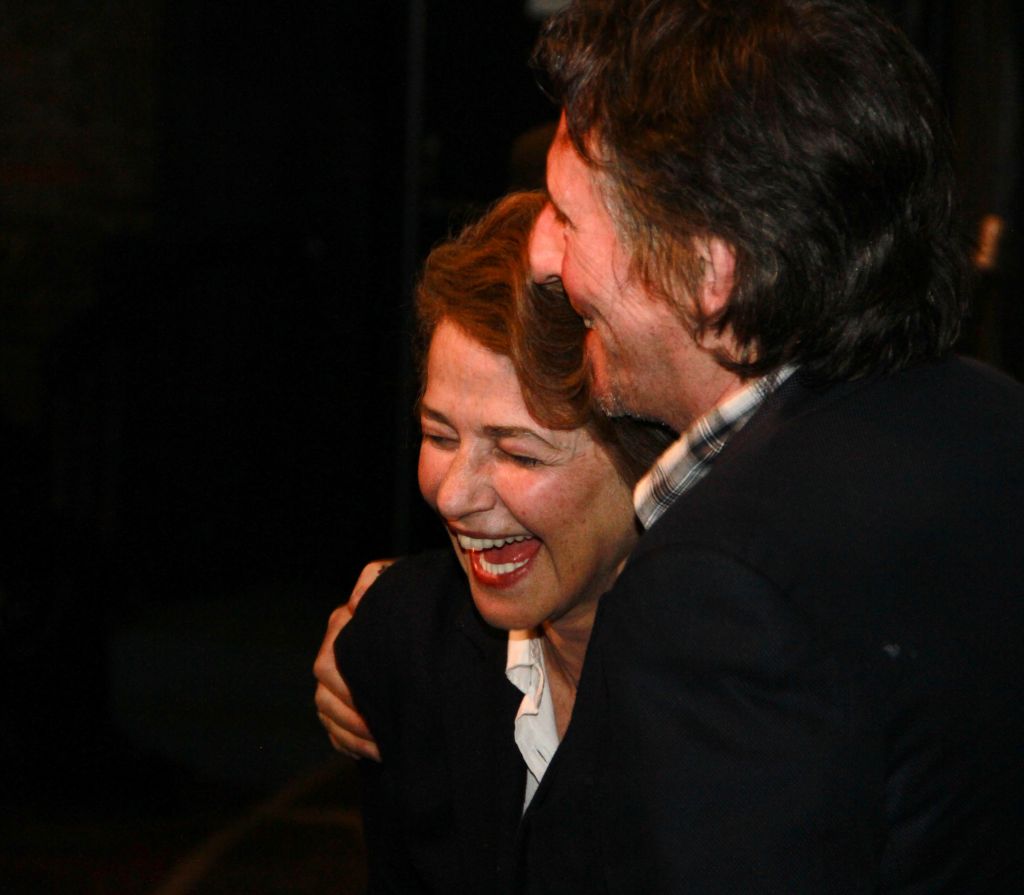 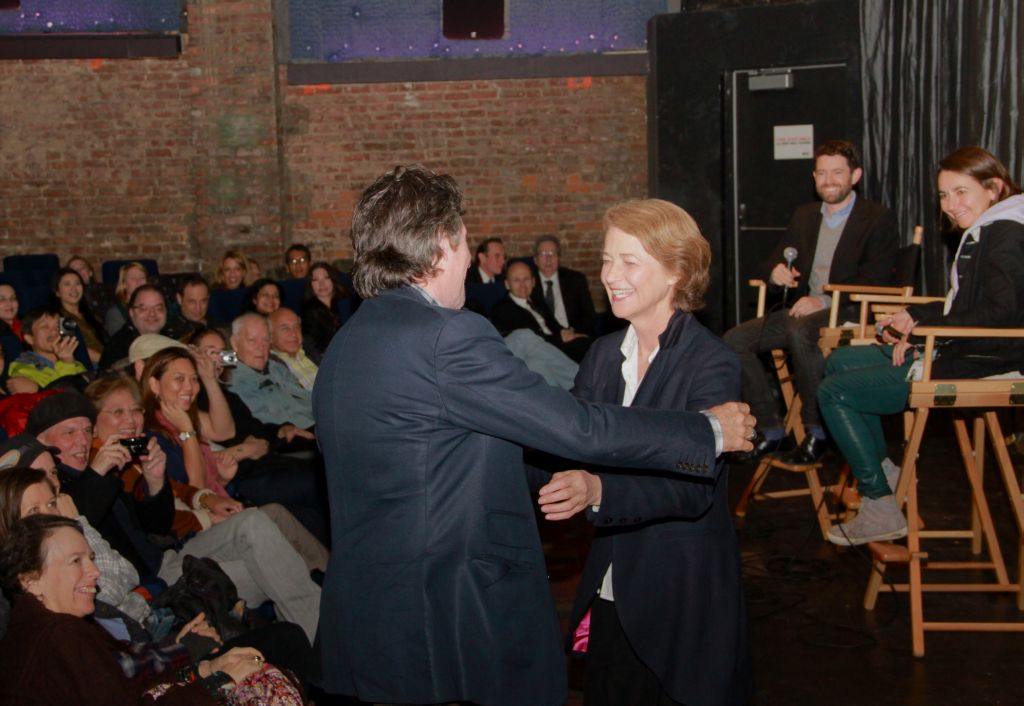 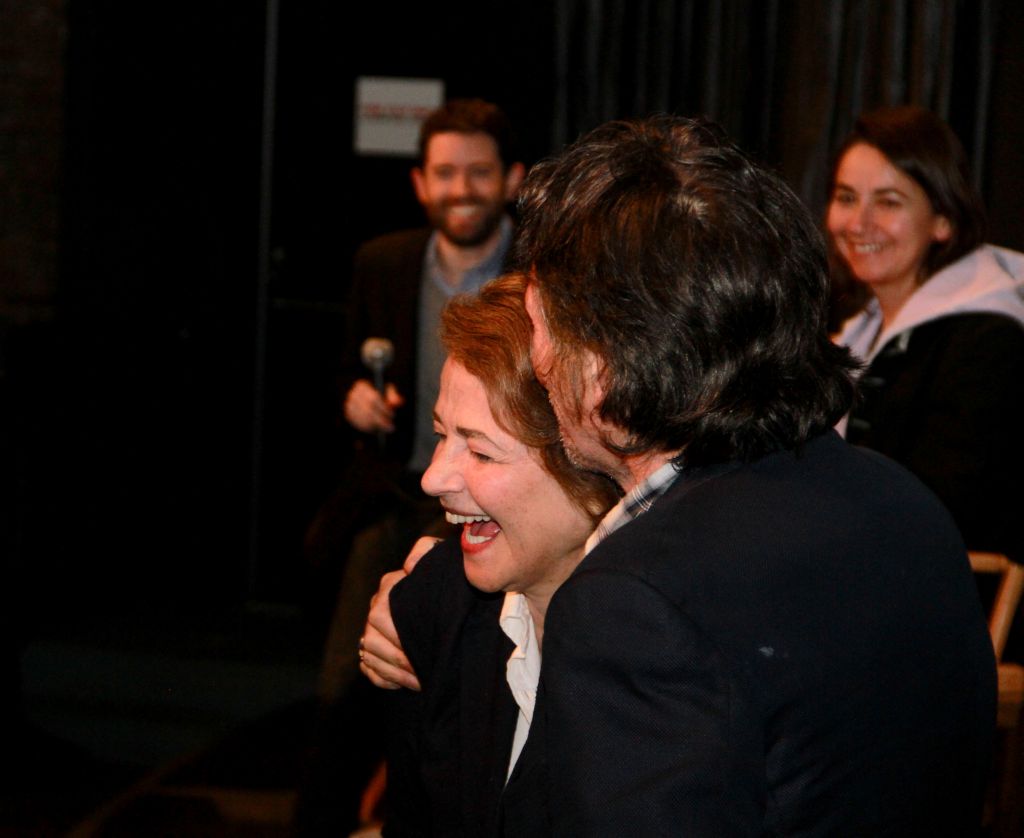 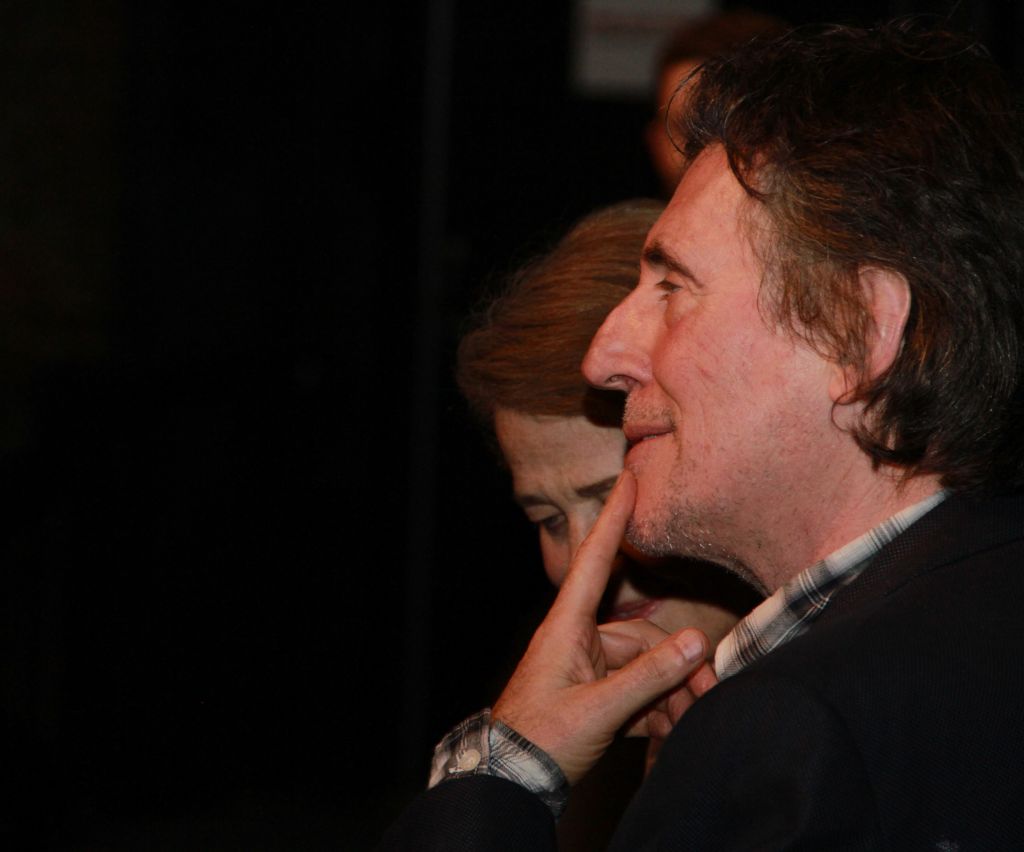 Our thanks to DOC NYC for posting these pics in Flickr and to Det. Logan for finding them for us!

The trailer for Charlotte Rampling: The Look

Perhaps Mr. Byrne and Ms. Rampling would consider a double feature sometime: her film The Look and his film Stories From Home? Then they could sit on stage and handle the torrent of questions that would come their way! Ok. Perhaps not… 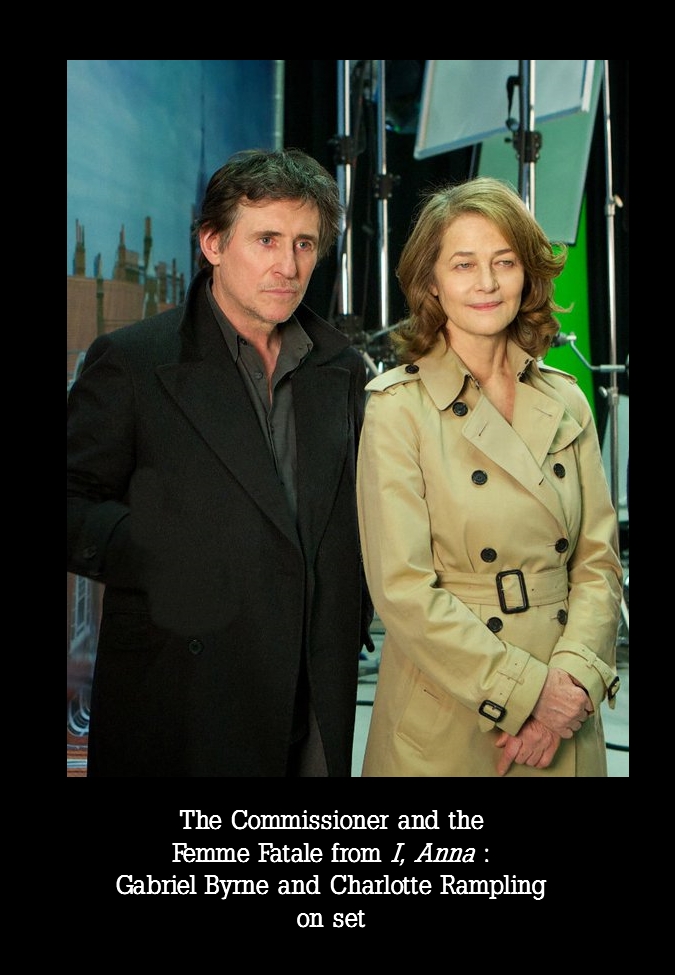 We do look forward to seeing them together in I, Anna!

BritFlicks has some news [This article is no longer available on the Internet, but it seems I grabbed the entire thing anyway, so we are lucky!]:

Principal photography is underway on location in London on “All Things To All Men” the exciting directorial debut of BAFTA-nominee George Isaac, who swaps his usual producing role (Kidulthood, Adulthood) to helm this crime thriller starring Golden Globe award-winner Gabriel Byrne (In Treatment, The Usual Suspects), Rufus Sewell (The Tourist, A Knight’s Tale, Zen) and Toby Stephens (Die Another Day, Jane Eyre). From an original screenplay by Isaac, “All Things To All Men” is being produced by actor Pierre Mascolo and George Isaac through Cipher Films, the production/finance venture they formed in 2003 to finance and produce the award-winning and commercially successful Kidulthood/Adulthood.

Set in contemporary London, “All Things To All Men” is the tale of Riley (Toby Stephens) a high line professional heistmeister hired to pull off the ultimate sting. Caught between Parker (Rufus Sewell) head of a maverick police unit and Joseph Corso (Gabriel Byrne) a renowned and feared crime lord, Riley is unwittingly drawn into a deadly game of cat-and-mouse. 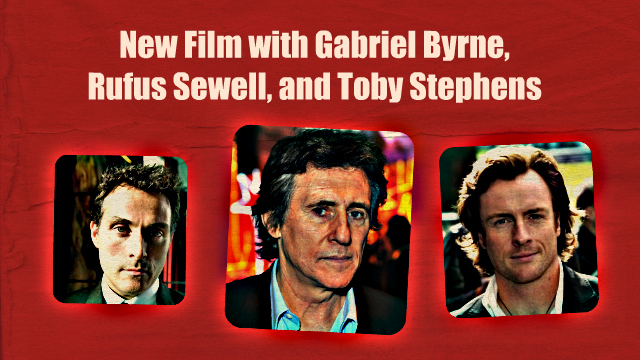 All Things to All Men

Most of the news that is out there for this film is in, you guessed it, French. So, here is something in English from BleedingCool.com (be sure to watch the “Villains Laughing Maniacally” video while you are there!):

Some French people made a French film and some French guy is going to be in it. Whatever. –Hannah

Brendon’s note: What Hannah meant to say was that Gad Elmaleh is going to be in Costa-Gavras’ film Le Capital, a financial thriller based upon the book by Stephan Osmont. Natacha Regnier and Gabriel Byrne will also have roles. It starts shooting in January [Note from Stella: that is not far away, folks!]. And she also meant to show excitement for a new Costa-Gavras film, then praise the French for their all-round solid levels of cine-literacy…

Intrepid translator Ara tells us that Vincent Cassell (Black Swan, Eastern Promises, A Dangerous Method) and Mathieu Kassovitz (Munich, Birthday Girl, Amelie) are no longer attached to this film (if indeed they ever were, officially-speaking) and Gad Elmaleh (he can be seen in The Adventures of Tintin next month) has joined the cast now. 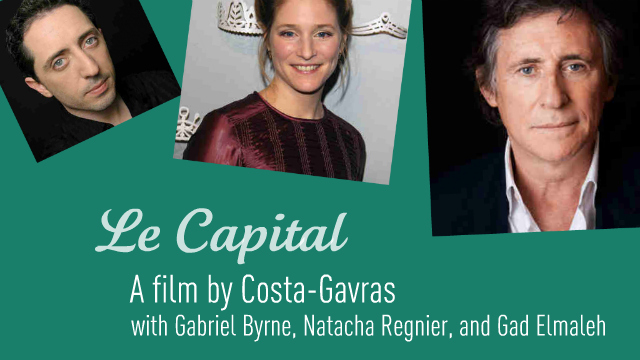 The AV Club interviewed Costa-Gavras in 2009 [This interview is no longer available at the AV Club website].

At the very end, he is asked about the future:

Do you recall that Gabriel Byrne made another film with Costa-Gavras? How cool that they are working together again!

Shooting will start January 9, 2012 in Paris and London.

This film was finally made and then released in 2017 with a different director and a very different (but cool!) cast.

No news here. Interesting to note that Christie always acknowledged this novel as one of her favorites. If you want to learn more about her, you can start at the Agatha Christie official website.

And there is this tidbit from Word & Film that makes me believe this film will be good [this article is no longer available on the Internet]:

Crooked House‘s narrative unfolds around the murder of a powerful Greek patriarch, who is poisoned by his eye medication. When his bereaved daughter refuses to marry her fiance until the murder is solved, her intended, the novel’s protagonist and first-person narrator, takes it upon himself to crack the case. The ensuing whodunit casts suspicion on various family members, each of whom stands to gain, financially or otherwise, from the paterfamilias’ death. However, in typical Christie fashion, the perpetrator is far from the top of the list of suspects, and is motivated by much more mundane and casually cruel motives. In other words, it’s a nihilistic amorality tale that seems tailor made for LaBute’s dark-hearted sensibility. Lately he’s been slumming in the genre trenches, churning out programmatic crime flicks like the hate-crime thriller “Lakeview Terrace,” and last year’s literally titled “Death at a Funeral.” So Crooked House could be a return to the promise he showed early on with his adaptation of A.S. Byatt’s mystery-romance, Possession.

I loved Possession. The only LaBute film I have ever really cared about. I’ve seen it multiple times and it always stands up. His other films? Not so much. So if Crooked House and Possession are similar, we are in luck!!!

A great overview of the book can be found in Salon’s article from 2008:  Why Flann O’Brien Is So Funny, by Nathaniel Rich.

O’Brien’s lack of readership is particularly surprising since of the holy Irish trinity [Note from Stella: Joyce and Beckett being the other two], he is by far the funniest. His masterpiece, At Swim-Two-Birds (1939), has the singular distinction of being consistently laugh-out-loud funny, even on a second or third read, even 70 years after its publication. Many readers today regard Ulysses or the Molloy trilogy in a daze of stultification or with mild terror at the novels’ calculated efforts to frustrate narrative convention. Yet it would take a reader of calcified heart to read O’Brien’s best work without laughing his face off.

It’s not a throwaway line—the notion of coherence speaks to one of the crucial qualities of O’Brien’s work. Where Joyce’s late narratives fracture and any semblance of plot dissolves in Beckett, O’Brien is the drunk at the end of the bar with a long tale for every comer. His juxtapositions and digressions are not capricious. Instead they create a sense of rooted familiarity, a whimsical landscape in which the most absurd things happen—but always, it seems, for a reason.

From an August interview in The Playlist, director and writer Brendan Gleeson notes that Michael Fassbender has been added to the cast (including Gabriel Byrne, Colin Farrell, Cillian Murphy and Gleeson himself) and hopes filming will begin in April, 2012:

“That happened about a year ago really,” he said of Fassbender’s addition to the cast. “People never picked up on it, maybe because Michael wasn’t really quite the massive name he is now. But we were trying to tell people for ages, ‘By the way, listen: we have the coolest thing on two feet coming in.’ I haven’t asked any [actor] who said they wouldn’t do it. At this point I’ve been fretting about it to the extent that I don’t fret it anymore, I don’t sweat it at all anymore. I know that I’ll know what to do once we get out there. And it looks like next spring is going to be when it’s going to happen.”

One assumes that means financing is in place and the film will be ready to roll come April of 2012, but Gleeson is not counting his chickens before they hatch, understanding full well the mercurial nature of film budgets and financiers. “It’s looking good, but I don’t believe anything now, anything ever,” he said. “I can tell you as long as the day is long, ‘Oh definitely, it’s going to happen,’ and all that, but until I’m actually there, I don’t believe it. But at the moment it’s happening, I can feel it. It’s all looking good.” 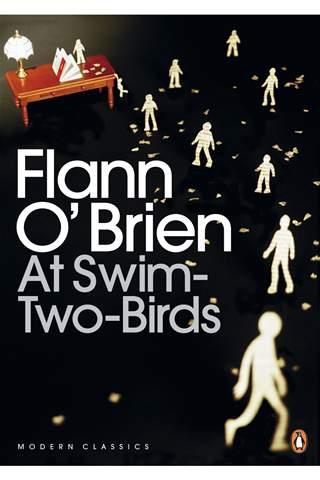 So, that is all the movie news for now. Which film are you most eager to see?