Gabriel gets mentioned a great deal these days in the formal press, in blogs, on Twitter (lots about him on Twitter). Here are two examples, one from an old friend and one from an Irish friend:

Sarah Treem Gets the Ojai Treatment

In this interview, Ms. Treem, well-known to us for her stellar work on all three seasons of the show, notes that In Treatment may be coming back for a fourth season. Woo hoo!

At present, she is working on another series, House of Cards, with Kevin Spacey and Robin Wright, and director David Fincher. Does anyone remember the original on British TV, with Ian Richardson? It was amazing stuff.

Here is what she has to say about therapists and about Gabriel Byrne:

She was, she says, a happy kid, never growing up with anxiety or depression, but as an adult she began having panic attacks.  A firm believer in the mind-body connection, she began to see a therapist.  “As an artist, you need to tap into your anxieties—the things that haunt you—and then dramatize them,” she says.

“The problem with therapy for me was that I was working on In Treatment at the time, and I kept rewriting my therapist’s comments in my head and being annoyed that she was deflating all the tension out of the scene.”

As an aside, she notes that Gabriel Byrne, who starred as the therapist in the series, is “a genius.  An incredibly well-read man and a once-in-a-generation actor,” she says.  “He portrays a man who listens.  But in the midst of a speech he would suddenly break into a quotation from Kierkegaard and I would have to say, ‘Gabe, you just can’t alienate the viewers by breaking into a quote from Kierkegaard.’”

Treem went on to win a WGA Award for In Treatment, a nomination for a Humanitas Award, and a new gig as a writer/producer for the Mark Wahlberg/Stephen Levinson HBO series How to Make It In America.

The rest of the interview is sadly no longer available on the Internet.

We give thanks to Kris (USA) for the heads up on this! 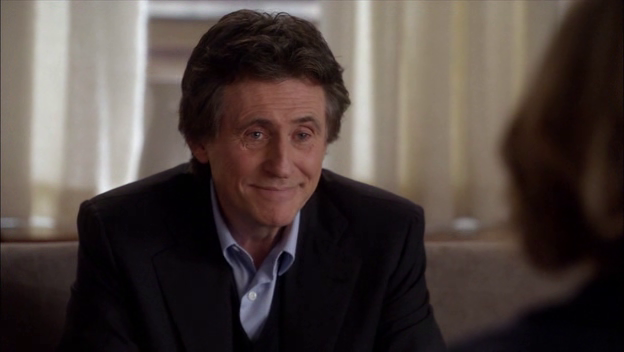 Colm has a blog called Colm O’Regan. This makes sense, actually, because he is an Irish stand-up comedian and writer and name recognition is a big deal in the arts. So, he tweeted today that he had published a posting about Gabriel Byrne and Rihanna and that certainly captured MY attention. The upshot? Apparently stars rolling into small towns to film either movies or music videos can cause quite a stir!

Here is part of the relevant section involving Mr. Byrne:

In 1982, Gabriel Byrne came to town. At that stage, Byrne was chewing up the scenery as he brooded his way around ‘Bracken’; the forerunner to Glenroe and an altogether more serious affair. The entire sum of the Miley-Fidelma or Dick-Terry fumblings could not match the latent sexual tension in Gabriel Byrne’s eyebrows. And one summer, he brought those eyebrows to Dripsey to make a filum.

He played the role of William Master in a movie called ‘Reflections’. It’s plot is described rather unpromisingly in Wikipedia as: “A writer working on a biography of Isaac Newton goes to stay with a declining aristocratic family and becomes entangled with them.”

If you’re aristocratic, you’ll be wanting some sort of castle. Built by Cormac Laidir McCarthy in the 15th century, Dripsey Castle fitted the bill perfectly and a production crew was on site for a number of weeks. Locals turned out to watch the stars in action. There are grainy photos of my mother standing next to Gabriel. She’s wearing a pair of plaid flares and looks girlish. None of her sons are there to spoil the moment. As I look at it I imagine a slight glint in her eyes. Do I see a hint of a flirtation with Ireland’s cultural ambassador? Whatever it was, it was fleeting. One day, the crew packed up and left; and life returned to normal. 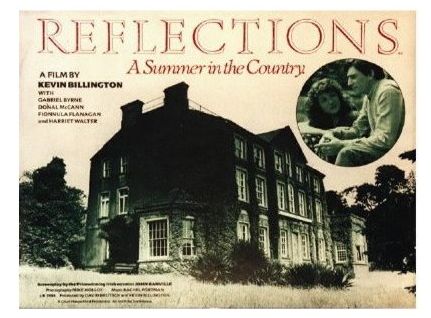 The film actually has a stellar cast, including Harriet Walter and Donal McCann. And we would all love to see that grainy photo of Mr. O’Regan’s mother with Gabriel, yes? Thanks for posting, Colm!