Tent City, USA is available for streaming at Amazon! 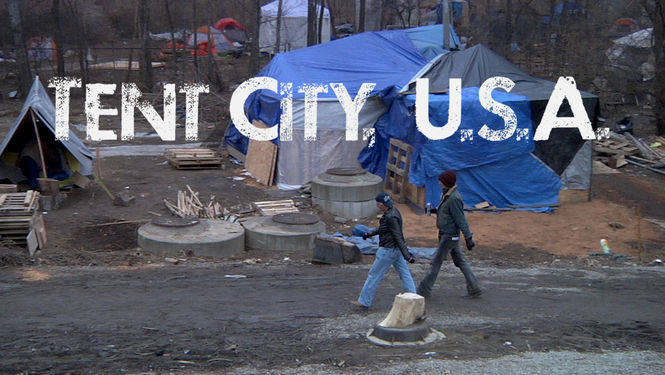 The film’s director, Steven Cantor, was interviewed at IndieWire back in 2012 when the documentary premiered on Oprah Winfrey’s OWN network.

Steven Cantor: Gabriel Byrne and [executive producer] Leora Rosenberg first pitched me the idea of a film on homelessness. Leora is involved with a New York based homeless facility called The Doe Fund and thought there might be a story there. And Gabriel is one of those genuinely sympathetic souls who felt the homeless experience must be unbearable and sought a way to capture the essence of that. Our producing partner, Margaret McCombs and I honed the idea in on Nashville’s tent city. We were drawn by the notion of a group of people who have lost every semblance of community in their lives, only to band together to create a new community.

I was particularly struck by how being homeless amplifies everything in life. For example, when the river flooded in Nashville, it was hard on the whole city and made national headlines. But what did not get attention was that the tent city homeless population lost EVERYTHING they had. It was not much to begin with, but whatever it was was gone and they had to start from scratch.

Thanks to Floor for the heads up on this interview  [no longer available online] with Gabriel Byrne at Stick Figure Productions, the producers of the film. Here is an excerpt:

Sounds like a tough sell. How did you get it off the ground?

It’s funny, we initially pitched the concept to Steven and he was only moderately receptive. I recall vividly our early meetings where I would rant on with my Irish enthusiasm about how poetic the film could be and how important it was to tell the story of homelessness. I was prepared to go out myself and do some “man-in-the-street” interviews in New York to get things started on what I thought would be a topical film. But Steven kept hammering us on finding the specifics and the individuals whose stories we would tell. He was like a stone wall – I don’t think it’s possible to convince that man on an issue for a documentary. But once we zeroed in on the few people in Nashville, it crystallized for him and for all of us and from there the film was born.

To what extent were you involved in the production?

I was most active in the whole development process. Once we brought Steven and his producer, Margaret McCombs, on board to make the film, there was a lengthy process to figure out the specifics of the story we wanted to tell. Homelessness is such a vital, visceral experience for one to go through, so we had numerous possibilities. I had never been involved in developing a documentary to that extent, so it was a good learning experience for me as well.

I also watched the footage and rough cuts and gave some feedback which I like to think was helpful.

And I contributed a riveting opening voice-over! (laughs)

From Oprah Winfrey’s network, OWN:

“Due primarily to the economic recession, a growing number of people are finding themselves in a position they never imagined: homeless. Tent City U.S.A. explores a community in Nashville, Tennessee of nearly 100 homeless people who live under a downtown bridge. They work to stay together after a devastating flood destroys their land and forces them to evacuate.”

Tent City U.S.A. premieres Thursday, April 5th at 9/8c only on OWN.

The New York Times has a review and here is an excerpt:

Part of OWN’s slate of original documentaries backed by famous Hollywood names, “Tent City U.S.A.” (Gabriel Byrne is an executive producer) examines an encampment of homeless people in Nashville, a city, we’re told, where the rate of homelessness is well above the national average. A few months into filming, something happened that was a disaster for the camp’s residents and a macabre stroke of luck for the documentary’s director, Steven Cantor (“Devil’s Playground”): the record-breaking Tennessee floods of 2010 put Tent City under 10 feet of water, uprooting the film’s subjects and sending them down different paths, variously hopeful, heroic, troubling and bleak.

And in a Phoenix Movie Examiner interview with the director, Steven Cantor, that is unfortunately no longer available on the Internet, we learn something about Gabriel Byrne that we actually already knew:

In “Tent City, U.S.A.,” which will air 9 p.m. Thursday, April 5 on OWN: The Oprah Winfrey Network, Cantor takes a look at homelessness in Nashville, Tenn. The project was first pitched to him by executive producers Leora Rosenberg and Gabriel Byrne. Cantor explained that Rosenburg is involved with a New York-based homeless facility while Byrne is a genuinely sympathetic soul.

If you have the opportunity to watch this, please leave a comment and tell us what you think!