Today is special. Below you will find Joe Leydon’s wonderful review of “Le Capital” from Variety.

He puts the film in context (both in terms of past Costa-Gavras films and the current American political scene), shares some great observations, and accuses Gabriel Byrne of scenery-chewing (in a good way!). This is the most thorough and appreciative review of this film so far, for which we thank Mr. Leydon, a critic I’ve appreciated for a long time.

A cracking good melodrama set in a contemporary world of high finance and low cunning, Costa-Gavras’ “Capital” nimbly plays on our worst memories of the 2008 economic meltdown with a persuasively detailed tale of boardroom politics, international banking, remorseless backstabbing and billion-dollar wheeling-and-dealing. Glossy pic should click with the same sophisticated ticketbuyers, downstreamers and vid renters fascinated by “Arbitrage” and “Margin Call.” In key arthouse markets with an older-skewing clientele, it also could trade on the cachet of being the latest effort from the director of “Z” and “Missing.”

Although it indisputably ranks a few rungs lower than the latter two titles on Costa-Gavras’ greatest-hits list, “Capital” finds the acclaimed auteur pretty close to the top of his game.

Indeed, although the narrative consists largely of impeccably dressed business types doing nothing more (or less) dramatic than talking to each other in well-appointed offices, Costa-Gavras develops such a propulsively suspenseful pace — with no small assist from Armand Amar’s mood-enhancing Euro-tech score — that his drama comes across as the cinematic equivalent of an engrossing page-turner you might purchase off the rack at an airport newsstand.

Board members figure the appointment is just a temporary measure, and indicate as much when they initially make a salary offer that Tourneuil takes as a condescending insult. But the new CEO has every intention of holding on to his job permanently, despite the ambivalence of his wife (Natacha Regnier), the child of an old-money family. “For you,” he tells her, not altogether lovingly, “wealth was long ago. For me, it’s the future.”

Tourneuil’s most helpful ally in his bid to maintain his position turns out to be Dittmar Rigule (Gabriel Byrne), the gladhanding but hot-tempered head of a U.S. hedge fund with a large stake in Phenix. Rigule views Tourneuil as a useful pawn in his long-range plan to take complete control of the venerable French bank. Tourneuil, of course, has a much different role in mind for himself.

Working from a cleverly twisty script he co-wrote with Jean-Claude Grumberg and Karim Bouckercha, Costa-Gavras refuses to make things easy for the viewer, avoiding the cliche of a flawed protagonist in search of redemption. Instead, he obviously intends us to see Tourneuil as a thoroughgoing SOB whose one saving grace is his unapologetic self-awareness.

The helmer occasionally allows Elmaleh to break the fourth wall and directly address the audience, inviting one to share Tourneuil’s contempt for board members and other co-conspirators who support his reverse-Robin-Hood game plan. (He literally promises to rob the poor to fatten the rich, and is greeted with cheers.) At other points, the actor provides the point of view in fakeout scenes that pay off like the “Gotcha!” fantasies common in pics by another notable French auteur, Claude Lelouch.

Here and elsewhere, Elmaleh impresses with the utter fearlessness of his tightly coiled performance. Some may feel a bit sorry for Tourneuil as he is manipulated by a beautiful model (Lida Kebede) who teases him, and even borrows money from him, without ever making good on her seductive promise. But this subplot leads to a truly unsettling scene in which Elmaleh demonstrates just how tough the CEO can be when he’s crossed.

Incidentally, it will be interesting to see how many U.S. critics comment on Elmaleh’s physical resemblance to Rick Santorum, and how many will insist the pic echoes sentiments expressed in Mitt Romney’s notorious “47%” comments.

Thanks to Moondreamer for finding these! 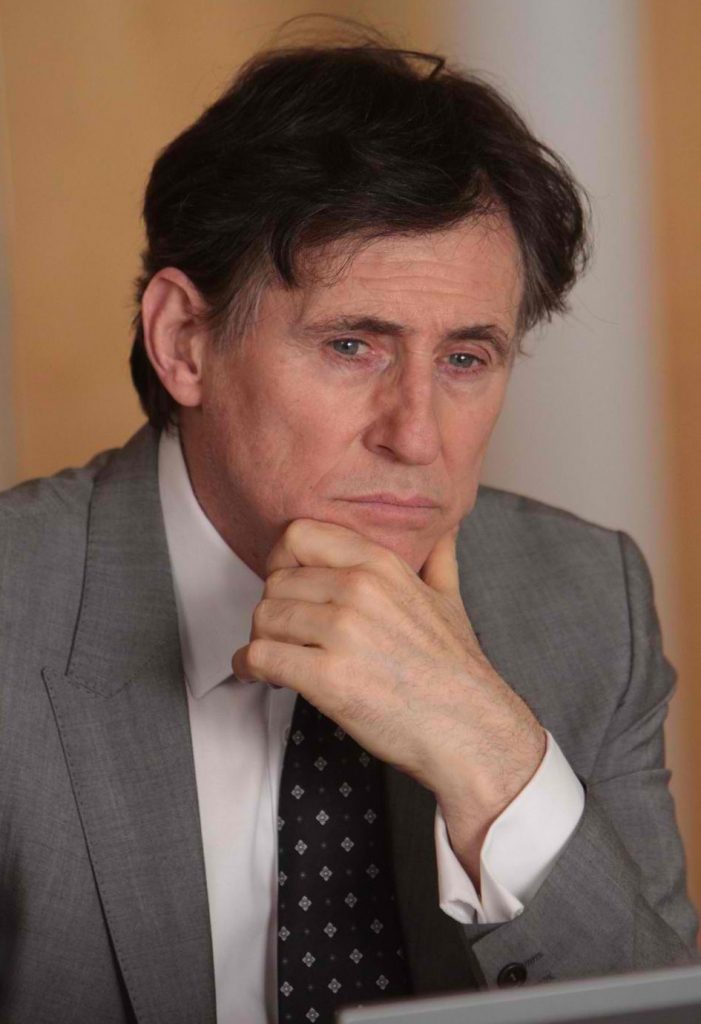 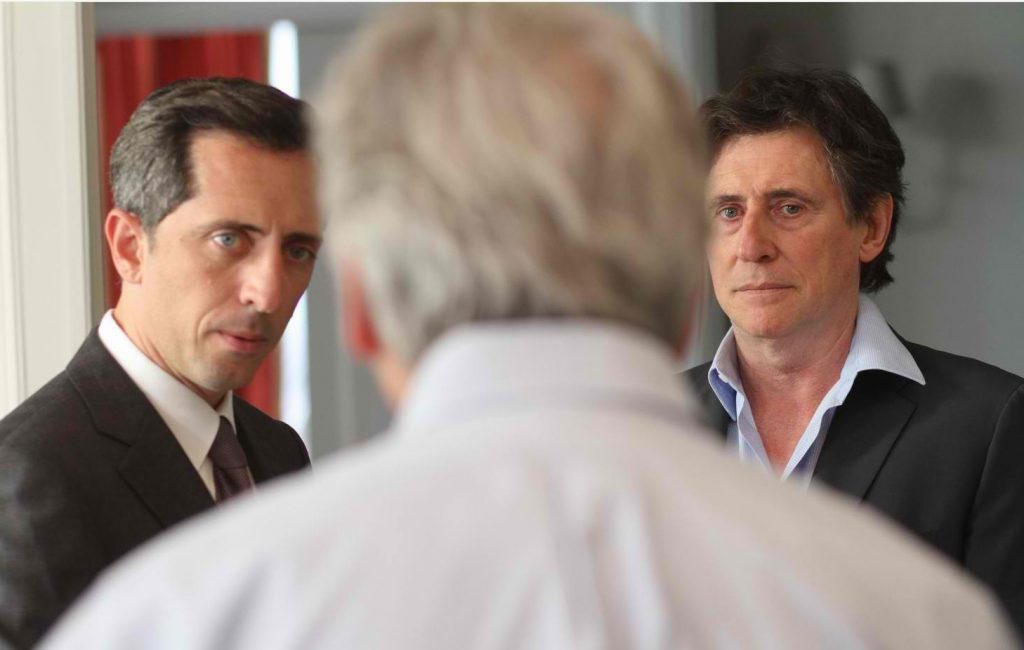 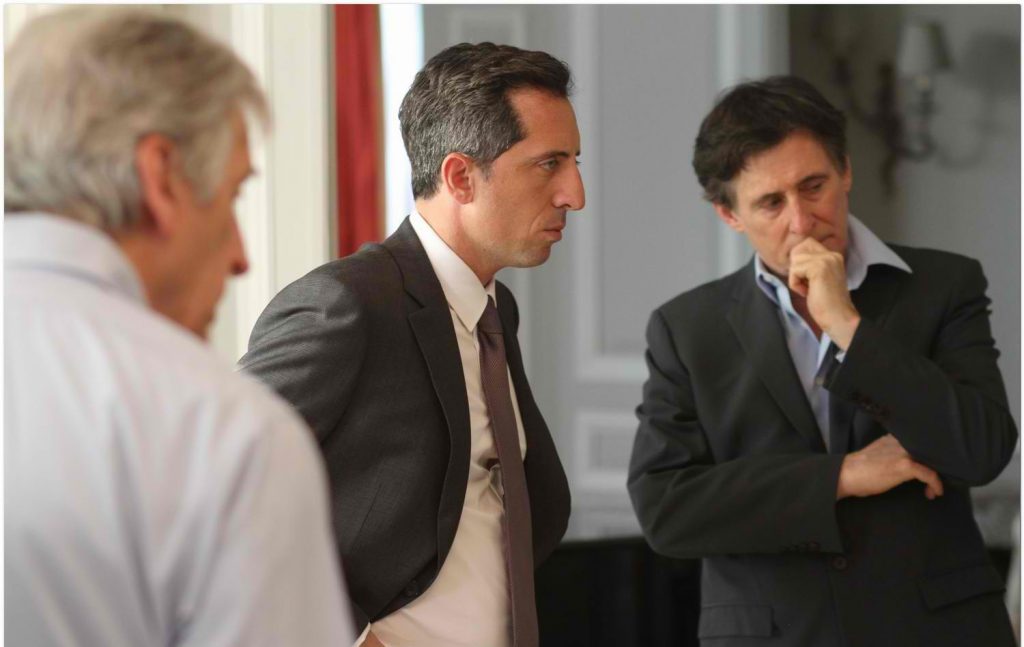 Several reviews are in (see excerpts below) and we are waiting for more, including one promised by critic Joe Leydon at Variety. Although Gabriel Byrne did not attend the festival (as far as we know!), director Costa-Gavras and star Gad Elmaleh were on hand to discuss the film and walk the red carpet. 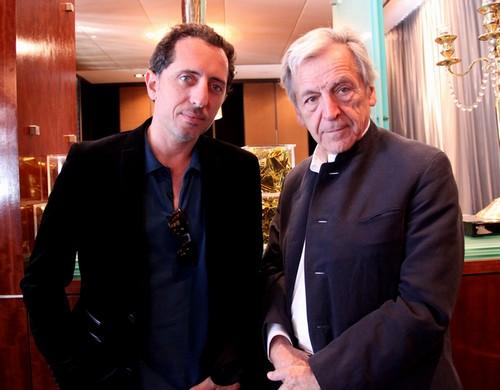 Gad Elmaleh and Costa-Gavras at TIFF

The Bottom Line: Costa-Gavras is back with a fast-paced, cold-blooded financial thriller that should appeal to Euro audiences.

Managing billions at the speed of light as he globe-trots in corporate jets, Elmaleh’s suave, smart and humorless CEO is alternately admirable and detestable, but never easy to identify with. Viewers will have their own cut-off points, but his arrogant attitude towards women would make even the writers of French perfume ads wince…

Capital is never predictable. Gavras lays out the world Marc inhabits and details the character’s brilliant machinations. Unlike the Stone pictures, we never have to feel bad about enjoying the excess. At the same time, though, said excess is so overpowering that we’re pretty much allowed as an audience to make up our own minds about the moral implications of Marc’s actions. The picture also allows us to experience the reality of how so few control so many and that we’re all pawns in the take-no-prisoners world of finance.

We also get the pleasure of delicious villainy. Marc may be up to all manner of nasty stuff, but early on in the film, one of his chief antagonists is a dark New World Order-styled banker-as-shark. Dittmar Rigule (a zealously slimy Gabriel Byrne), rears his ugly head as a huge threat to Marc, but also to the free world as we know it. Watching Elmaleh and Byrne go head-to-head is fraught with danger, suspense and the pleasure of seeing a game player as committed as Marc facing even higher stakes and hurdles for him to challenge.

On a strictly personal front, Capital infused me with the same spark of excitement I had as a kid during the 60s and 70s – watching great pictures by Costa-Gavras and so many other tremendous filmmakers. The privilege of being able to experience – at very tender and impressionable ages – movies that not only entertained, but were, ultimately always ABOUT something is never lost on me and is happily reinforced when I see a contemporary picture like Capital.

The Flickering Myth and IndieWire also have reviews (they are less enthusiastic, however) and here is an interview about Le Capital with director Costa-Gavras from The Seventh Art:

According to Variety, Le Capital has been picked up by Cohen Media for distribution in the USA! And Deadline.com provides the best report on this great news:

Ms. Fontan Tessaur adds, “I am exceedingly pleased for Elle Driver to partner with CMG on an important film like CAPITAL. Having the opportunity to work with CMG in presenting Academy Award winning director, Costa Gravas’ latest film to the public is especially gratifying.”

Costa-Gavras has created films that offer insightful, politically-charged, and incisive portraits of power and corruption. He has also worked with Gabriel Byrne in the past (Hanna K).  And now he brings his own special brand of film-making–and Gabriel Byrne–to his latest project, which premieres as a Special Presentation at this year’s Toronto International Film Festival. In addition to Mr. Byrne, the film stars Gad Elmaleh and Natacha Regnier. It is based on the book by Stéphane Osmont. 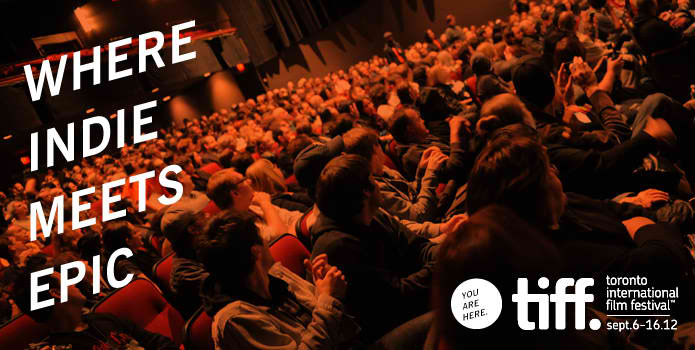 Banks and the dizzy world of high finance turn the wheels of Capital, Costa-Gavras’ topical dissection of the capitalist system. The celebrated filmmaker has never been one to shy away from controversy, nor issues of the moment. He made his reputation with a series of compelling films about contemporary political and military dictatorships (Z, State of Siege, The Confession, Missing), and in his new film he tackles an issue that has been at the forefront of media attention since the economic meltdown of 2008. Four years after the bailouts, bank scandals continue to dominate the headlines, and Gavras has leapt into the fray with this scathing drama.

Capital plunges us into the inner workings of the fictional Phenix Bank, one of France’s biggest financial institutions, where the brass are forced to look for a new CEO after the incumbent suffers a sudden heart attack. They eventually alight upon young up-and-comer Marc Tourneuil (Gad Elmaleh), a surprise candidate, but one regarded as easily controlled: the Board of Directors view him as a useful stop-gap, while as far as the recuperating ex-CEO is concerned, Marc is simply keeping the seat warm until he can return to his rightful place. But it is the wily, scheming Dittmar Rigule (Gabriel Byrne), a sweet-talking but ruthless Irish investor, who realizes that if he plays his cards right he can have the new CEO in his power. Marc, on the other hand, has no intention of acting as anyone’s patsy: thrown into a snakepit of plots and counterplots, he is determined to outlast them all — and become his own man…

“…Wily, scheming Dittmar Rigule (Gabriel Byrne), a sweet-talking but ruthless Irish investor…” Oh, my. We like the sound of that.

Thanks to Aragarna for the poster! 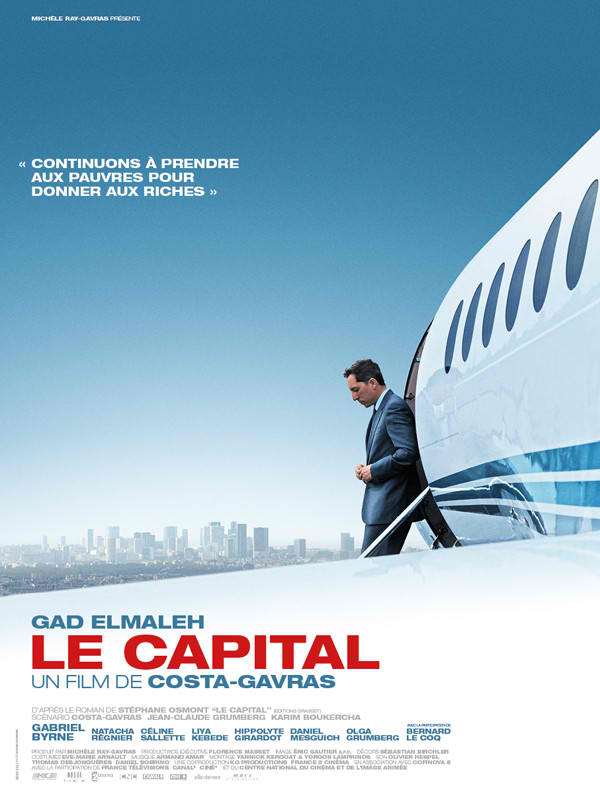 Let’s continue to take from the poor and give to the rich. 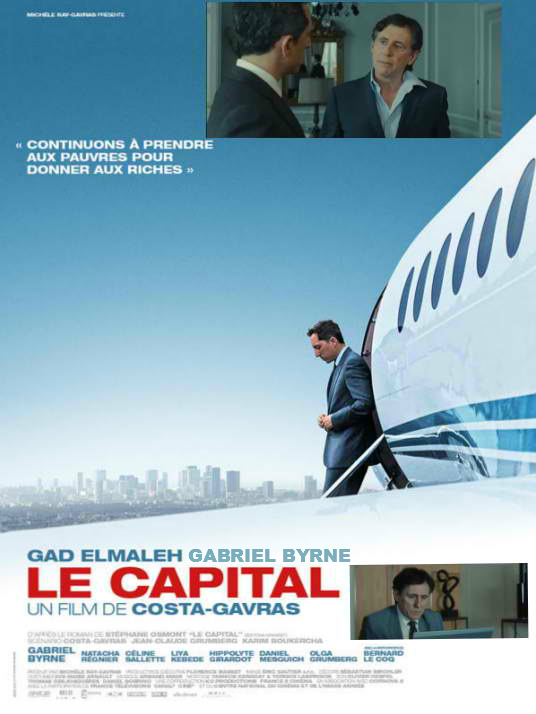 We like this poster better. wink
Thanks to Ramona for the artwork!

Leave a Reply to elcon56 Cancel