I was unable to listen to Dr. Cherie Ann Turpin’s podcast on August 15 (selling my house and moving across the state took a big chunk out of my life that day!), but now that I have listened to it and absorbed it a bit, here are some thoughts:

Dr. Turpin and Adrian Ayers, her research assistant, both seem to be coming to this Gabriel Byrne Book Project with a keen interest in the ideas of  cultural and racial difference and cultural exclusion, in addition to the primary focus of cultural hybridity. I was not thinking about these issues so much, but now that they have put them into some context, I find them relevant in this discussion.

The description of Gabriel Byrne as “alleged Cultural Ambassador” needs some explaining, I am afraid, but I did understand the idea of actors and other artists serving as “de facto cultural ambassadors,” whether they wanted to take on those roles or not. Of course, in the case of Mr. Byrne, this was a formal role he accepted with apparent relish and he achieved a great deal during his stint as Cultural Ambassador for Ireland. You can read all of the blog postings here at the Byrneholics website for evidence of his accomplishments in this unique role.

The notion of “commodity” in the arts is an intriguing one and something that Mr. Byrne obviously understands. He has been talking about the link between business and the arts for a long time. However, I am not certain I have ever considered him or his work as “commodities,” but that probably points more to my possible over-romanticizing the nature of the artist and his creative process than anything else.

The idea of the “artist as émigré” has an almost mystical power and conjures up everyone from Aristotle to T. S. Eliot. How individuals integrate their origins with where they end up in the world is part of what “cultural hybridity” is about and this aspect of the discussion regarding Gabriel Byrne will be intriguing, of course.

Dr. Turpin did a great job of explaining aspects of the research process and what a critical role cultural identity can play in this process. She also noted that it was important to begin looking at an artist’s work–books, films, official roles–in terms of its structure. How did the process develop? The “how” is the important place to start, not the political messages that might be derived. And it is important not to get caught up in one’s own politics when engaged in research like this. Not an easy achievement, surely, but required when looking at issues of subversion, intentional cultural coding, and other aspects of an artist’s creative output.

Apparently Dr. Turpin is also interested in a project on Edna O’Brien. How cool is that!?

Adrian Ayers noted that Gabriel Byrne is an example of cultural hybridity–he is a hybrid of Irishness and American-ness. This kind of hybrid is not always obvious at first. And often, when we think of cultural hybridity, we think of mixed race. Ayers noted (and I am paraphrasing here): “I can’t change my color, but he can change his accent.” So what are the assumptions we have about identity? If you can change your accent, can you change your identity? This is not an option for people of color, obviously. And yet Adrian Ayers noted that he has changed aspects of his identity over the  years (from colored to black to multi-cultural; from funk to R&B to a mix; etc.).

Cultural identity plus multi-nationality: Gabriel Byrne sees identity as a process–flexible, fluid, interchangeable. And in terms of hybridity, language is a marker. He speaks and has taught Gaelic. Dr. Turpin notes that mastery of another language makes one suspect in the United States.

And then the discussion moved in a direction new to me: the equating of Black and Irish. A book was mentioned: “White Britain/Black Ireland.” Black and Irish intermarriage was noted. At some point, the Irish became “white.” This is all new territory for my understanding of Irish culture and history, but the ongoing legacy of discrimination against Irish and Black people is not new at all. The equating of them socially and racially by dominant white culture is something Mr. Byrne mentioned in his radio interview with Leonard Lopate as he talked about the MOMA Film Festival. So it is time to hit the history books, folks, and see what this is all about.

Finally, the influence of the Catholic Church as an important issue for Mr. Byrne was touched on. Dr. Turpin noted that one of the last projects Gabriel supported as Cultural Ambassador for the Imagine Ireland program was his direction of Mannix Flynn’s play James X and she surmises that he pissed some people off by doing this. I’ve thought that as well. But I’m glad he did it (the play, not the pissing off. Well, maybe both!).

So, that’s a bit about the blogcast. I do wish some of you had called in a question. I am sorry I was unable to participate myself.

As Dr. Turpin noted, she plans to interview some of us “Gabriel Byrne Fans” for a roundtable in September, so you can stay tuned for that and be thinking about questions you would like to ask during that blogcast.

And I thank her for her shout-out at the end of the interview. I think this book is going to be enlightening and intriguing. She and Adrian Ayers are at the beginning of their research process. They have a lot to learn about Gabriel Byrne and I’m thinking they will have a lot to teach us about him when they are done! 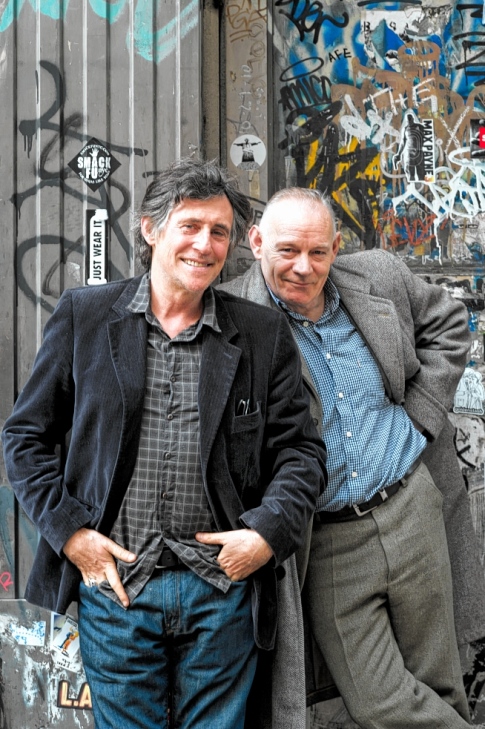 You are invited to a radio interview on Wednesday, August 15, 7:00 pm (Eastern time USA) at BlogTalkRadio!

Cultural Hybridity, Race, Gender: Research on Gabriel Byrne by At the Edge An Afrofuturist Salon

This interview is hosted by Dr. Cherie Ann Turpin, who is working on a book about Gabriel Byrne.

Taking a brief break from Afrofuturism, this episode features an informal discussion between me and my research assistant and former student Adrian Ayers regarding ongoing research for one of my book projects, ”Black Irish,” cultural hybridity, and the cinematic body: a study on Gabriel Byrne. Just how did I, as an African American woman whose research and publications has tended to center on gender studies, literary criticism, post-colonialism, and the African Diaspora, end up doing both a book on Afrofuturism and a book on Gabriel Byrne, a White male actor from Ireland? It’s not as far-fetched and unlikely as one might assume when it comes to understanding the politics of cultural production, icon-making, gender, and race. Tune in and call in with your questions.

You may recall Gabriel Byrne, during one of his presentations as Cultural Ambassador for Ireland, talking about the meaning of “diaspora”: the scattering of seeds. And you know he has been thinking about this concept, as well as ideas of identity and cultural displacement and methods to help artists connect with their audiences in creative and productive ways. So indeed! Dr. Turpin’s project is not far-fetched at all.

This should be an enlightening and intriguing conversation. Think about questions you might like to ask and call them in.

And stay tuned for more from Dr. Turpin about this creative project and the always amazing Gabriel Byrne! 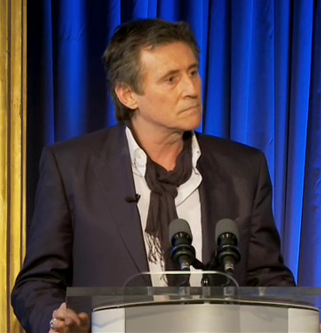