In this case, we must “Remember, Remember, the Seventh of November” and be sure to watch (if you are one of the lucky inhabitants of the UK that gets to see this show!) the first episode of Secret State. 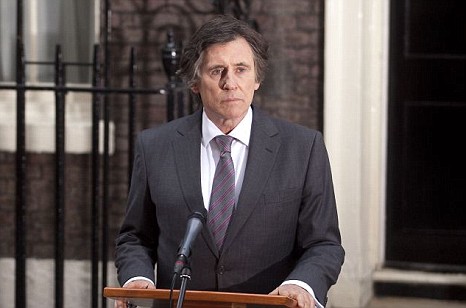 Gabriel Byrne laughs darkly when asked if he based his latest character, deputy prime minister Tom Dawkins, on any contemporary politicians. ‘There wouldn’t have been anything to go on – they’re all so furiously acting being themselves,’ he says. ‘Dawkins is a throwback to the time when it wasn’t all just image and spin.’

Dawkins is also a man of principle, a quality Byrne believes is in short supply. In Secret State, a four-part political thriller that marks his belated starring debut on British TV, he creates a solid man of integrity, not destined for the spotlight, who finds his hat unexpectedly thrown into the ring when a  national crisis strikes.

‘That’s his battle,’ says Byrne. ‘He represents the dichotomy between who we are and what we’d like to be. He may not see himself as a leader but he has to make a stand.’ Or as one party grandee, played by Charles Dance, tells him: ‘You give off stability, Tom – and people are craving that.’ 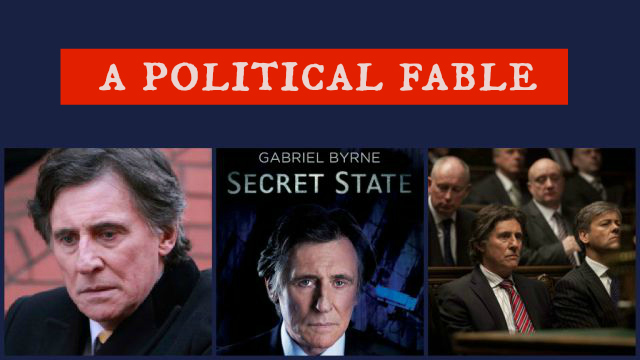 At BBC Radio 4: Front Row, listen to award-winning political commentator Andrew Rawnsley discuss the first episode of Secret State (this link takes you to the 6-minute audio clip at the BBC Radio 4 website). Mr. Rawnsley is a big fan of the original dramatized version of A Very British Coup (1988), but he acknowledges that times have changed and the issues facing government are very different 25 years later.

The Gravesdiggers-Rupert Graves Fans-Tumblr site is a good place to visit so you can see whatever they, the lucky ones in the UK, have to say about the show! 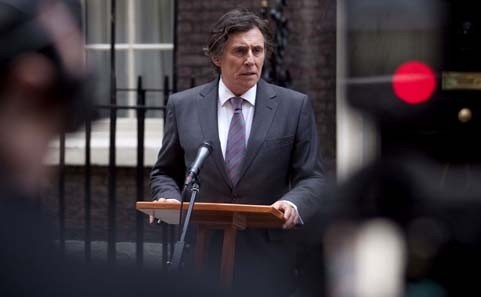 From Time Out London and no longer available on the web:

Is Byrne a morally courageous person?

He sits for a long time, stroking his chin. ‘That’s a very hard question for most people to answer. I think we’re all brave in different ways. I know I’ve been tested in certain ways…’ He looks thoughtful, before shifting in his chair and shrewdly moving the conversation back to politics. ‘I see a Shakespearean character in Blair – he has a major soliloquy going on in his head. How do you live with a decision like the one he made [over Iraq]? It fascinates me that he suddenly converted to Catholicism, where all sins are forgiven and salvation is guaranteed.’

From Time Out London and no longer available on the web:

From “The ten best TV shows of the week”

Gabriel Byrne is superb as shambling, reluctantly idealistic Deputy PM Tom Dawkins, forced to step in when his boss’s plane goes down. He faces a looming general election, mutinous colleagues and the fallout of an industrial explosion at an American-owned chemical factory in north-east England. A top-notch TV cast (Gina McKee, Charles Dance, Stephen Dillane) work with Byrne to carve out the characters in a relentlessly plot-driven piece, chockful of exposition and sometimes too pacy for its own good. But it’s undeniably gripping.

Well, actually the new series starts on Channel 4 UK on Wednesday, November 7. We here in the United States feel it started a few months ago, however. We are up to our eyebrows and earholes in the political campaign season, but the end is nigh. Ironic that this intensely political drama will begin the day after we have decided who we want to lead us for the next four years! I voted early, of course, so I am ready, willing, and able to focus on this new show from the other side of the pond. Interesting how difficult presenting information about this series has become–the pay-walls at various websites mean UK viewers know more about Secret State than the rest of the global community and the “geo-blocking” policies of the channel making the series available mean that I cannot provide behind-the-scenes videos that UK citizens can view to their heart’s desire. Worse yet, some information is still only available in print. And one of these articles apparently mentioned Byrneholics. Wah! The “secret state” certainly exists when it comes to the reviews and interviews published in the UK about this drama. I hope that this “political fable” called Secret State touches on concepts of open and free communication, which is what the “global community”  is supposedly all about. I would recommend that everyone read Lawrence Lessig’s classic book “Free Culture” (this link takes you to a free PDF of his book):

OK. Enough ranting. Below you will find the cool stuff I was able to get my hands on. I thank these media outlets for making their information available to the world. Except for The Guardian–but more about that later.

Star of the Week: Gabriel Byrne

From “Bracken” to “The Usual Suspects” to “In Treatment,” almost everything Gabriel Byrne’s put his hands to as an actor has been a joy to watch. The Dubliner’s latest is “Secret State,” a new four-part drama for Channel 4. 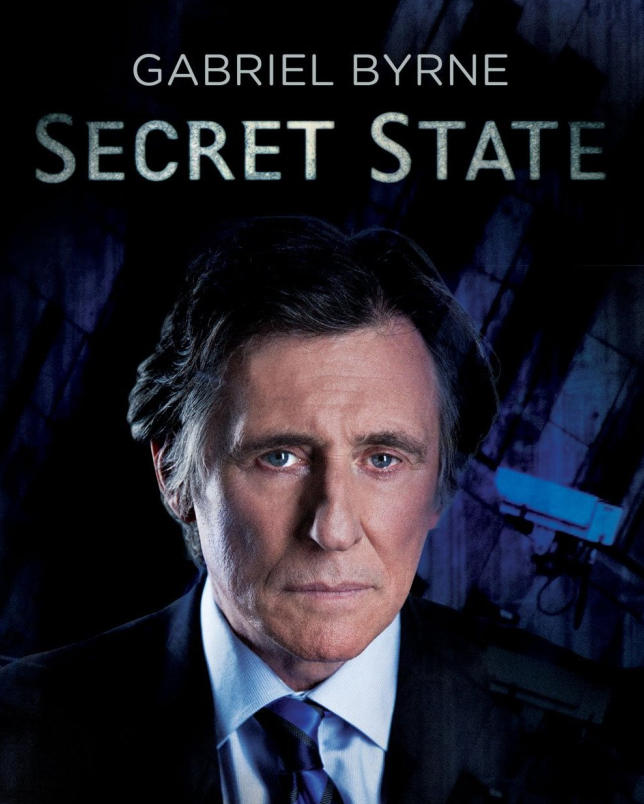 Gabriel Byrne tells Chris Harvey how brushes with Reagan and Thatcher helped him in his first starring role on British television, in Channel 4’s Secret State.

“[Secret State] is not in any way a remake,” he is anxious to point out, “it is a re-imagining of the elements of the basic story but it deals very much with a contemporary Britain, particularly the relationship between government and very big business.”

We are talking in April, with evidence still being heard by the Leveson Inquiry. He weighs his words carefully, barely touching his strong black coffee. The blue eyes that have made him a somewhat unlikely sex symbol flash irregularly with charm, but otherwise maintain a steady intensity. There is a stillness to him, a quiet, evenness of tone that, in the hush of the room, suggests a natural storyteller, a man used to being listened to.

“When you set out a story like this, the language of a thriller dictates that you want to know what happens next. But at the end of the story, what one hopes for is that people begin to question the world around them.”

“This is essentially a fable about an honest man who assumes the highest political office and very quickly comes up against all the powers who are determined to curtail his ambition. He’s a populist and probably an idealist and I think that one of the things that comes out of the story is that in the world of cold, hard economics, politics and business there’s not really that much room for the idealist.”

The drama develops its deepening web of interconnections convincingly from the start. And Byrne plays the lead with subtle conviction, giving off a vulnerability and warmth that pulls the viewer towards his side.

And don’t forget this article also from the Telegraph UK:

Gabriel Byrne: you can’t get behind the masks of Cameron or Clegg

Gabriel Byrne has said it would be impossible to play David Cameron or Nick Clegg as they seemed “meaningless” and were nothing but “interchangeable figure sticks”. 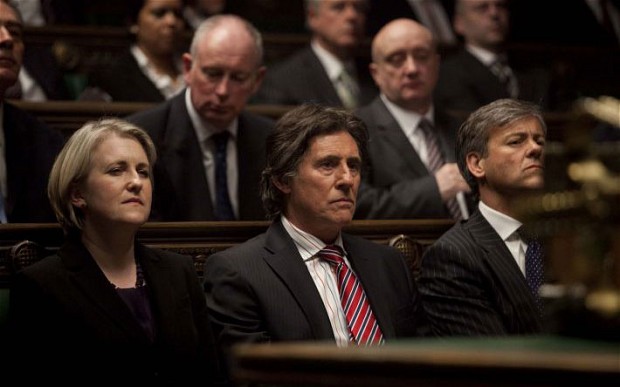 [This review is no longer available at Radio Times UK]

From the apocalyptic opening scene, this political thriller – very loosely based on Chris Mullin’s novel (and then Bafta-winning drama) A Very British Coup – grabs you by the throat and doesn’t release you from its grip for a second. Think State of Play or Edge of Darkness.

Gabriel Byrne plays Deputy Prime Minister Tom Dawkins, who’s been left with a right mess to clear up after an explosion in an American-owned petrochemical factory in Teesside, which has killed several people and devastated the local community.

Journalist Ellis Kane (Gina McKee) smells a conspiracy, but although Dawkins is prepared to listen to her, his colleagues in the corridors of power are more interested in a looming general election. Adding to his problems, MI5 spooks are listening in to and watching his every move, determined to derail any investigations. 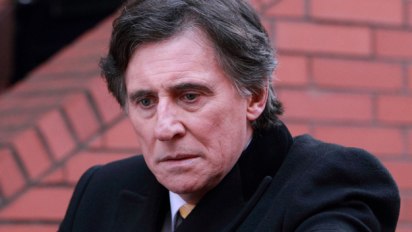 Ludicris? Is he in this series too? That is so cool. wink

‘You could reverse an oil tanker into the gulf between what “Secret State” thinks it is (important, good) and what it actually is (cobblers with exploding CGI bells on)’

…Meanwhile, in the middle of the woe, there is Gabriel Byrne, peering perpetually into the middle distance with the pained absentmindedness of a man with an undiagnosed urinary tract infection.

Oh my. Someone had a big glass of vitriol at lunch. So ironic that this very negative review is freely available to everyone who might be even remotely interested in watching this new series. While a harsh and excoriating review might be acceptable for any artwork, it seems inappropriate to publish such a review before the artwork has even been seen by the viewing community. Does The Guardian have a beef with Channel 4? Is Sarah Dempster a Gabriel Byrne hater? Why does she refer to it as “Gabriel Byrne’s Secret State?” He did not write or direct it. Ah, she has read some of the interviews that I have not–the interviews in which he discusses the focus of the drama and comments on UK politics and politicians. The light is dawning. I, unlike Ms. Dempster, will wait until I and the rest of the viewing community have had an opportunity to see this show before pontificating on its merits. Mr. Byrne has noted that he sees Secret State as a political fable. I know the difference between reality and fables. I also know that we need fables to help us understand reality. Witness the US election process! I hope those who have read her review will withhold their judgment until they have enjoyed the series in its entirety. Then we can talk more.

PS. What is a cobbler?

The DVD will be available on December 7, 2012 according to AmazonUK. 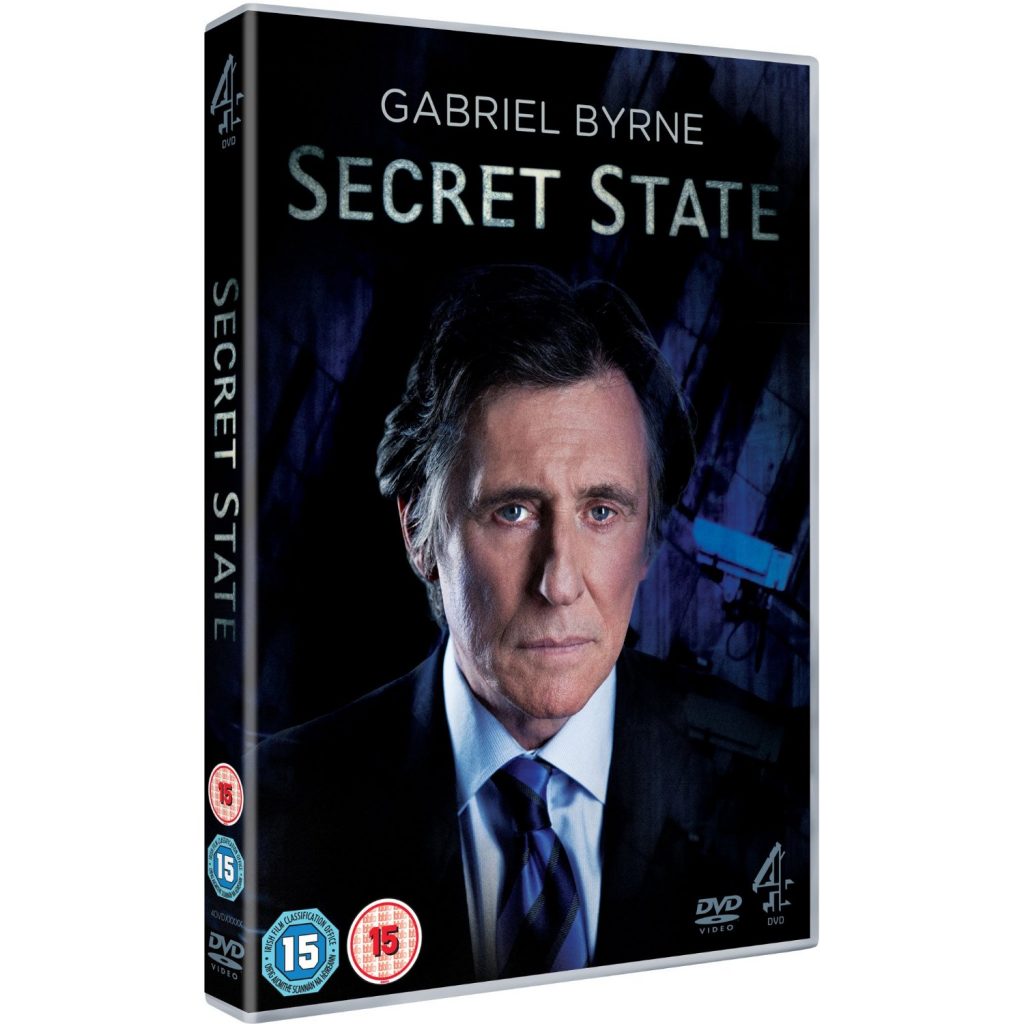