Quoting entire articles is not the usual practice here, but I cannot resist giving you the good news about this series courtesy of Antoinette Kelly at Irish Central, who informs us that filming for the series begins in July in Ireland!

Gabriel Byrne has always made surprising acting choices and his latest role maintains that tradition.

The Irish Film and Television Network reports that Byrne will star in the upcoming new Irish mini-series ‘Vikings,’ a co-production with the History Channel which will begin shooting in County Wicklow this summer.

Byrne has been cast as Earl Haraldson, an experienced political leader who finds his position threatened by a young descendant of the gods named Ragnor Lothbrok, who is attempting to become Kings of the Vikings.

The series reproduce the reign of terror Norsemen who raided their way through Europe unleashed in medieval times.

Writer Michael Hirst (whose credits include Elizabeth and The Tudors) created the Vikings series, and it will be aired on the History Channel as the first ever scripted series undertaken by the network. The ten-part series will begin production in July.

Byrne, who was born and riased in Dublin, has most recently appeared as Dr. Paul Weston in the HBO drama In Treatment, which played for three successful seasons and won the Irish actor a Golden Globe for Best Lead Actor in a Drama Series.

Vikings is set to air on the History Channel in 2013. 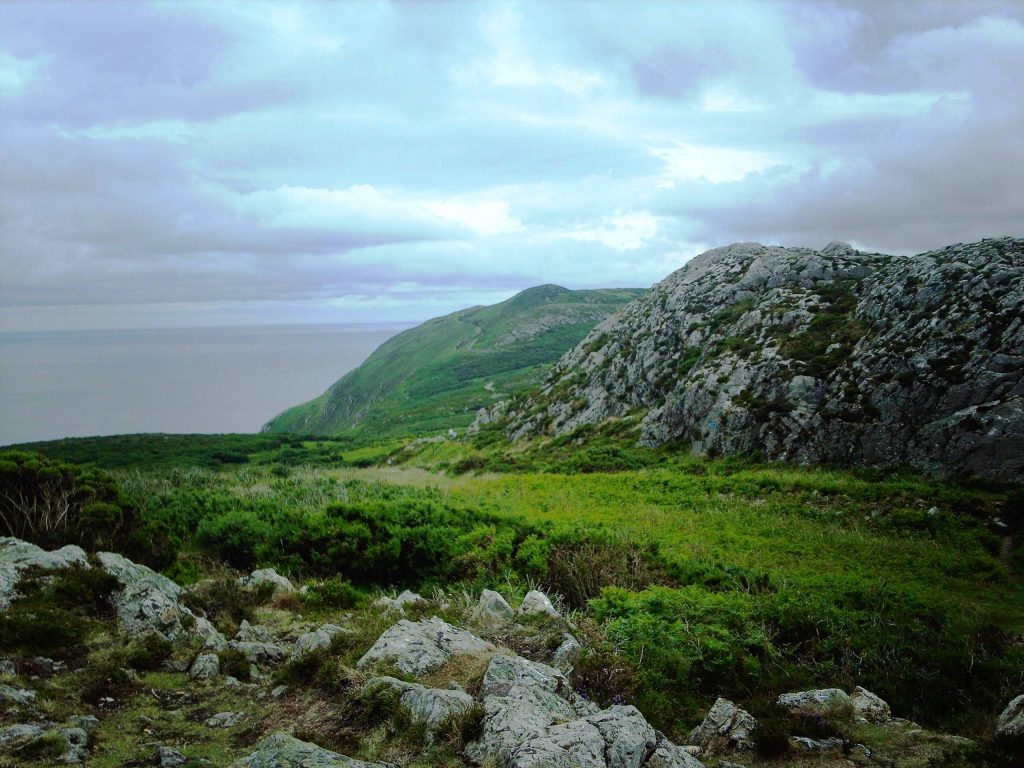 Thanks to Scarlett for the heads up on this latest news!

Gabriel Byrne is the busiest man on the planet. He has, at last count, one completed film this year plus at least six more projects in the pipeline in various stages of pre-and-post production, including television series and multiple films. He should share the details of his secret energy drink with everyone!

And now he is going back in time to bring the mysterious Vikings to life for us. This project must tickle his historian’s heart! He and The History Channel are heading into new waters. In its first scripted series, the channel has chosen the Vikings as their mythic inspiration. And they have chosen Gabriel Byrne to play one of their chief Vikings.

VIKINGS will chronicle the extraordinary and ferocious world of the mighty Norsemen who raided, traded and explored during medieval times. It follows the adventures of Ragnar Lothbrok, an historical figure, and the greatest hero of his age – and the gripping sagas of Ragnar’s band of Viking brothers and his family – as he rises to become King of the Viking tribes.

Earl Haraldson was the most important ruler in Ragnar’s district. A man of limited vision, he suspects Ragnar’s ambitions and goes head to head with him in a struggle for power and glory.  Once a mighty warrior, the Earl, a mighty political leader in his own right, will take on Ragnar, his opposite in every way: a lowly farmer; a young man thirsting for knowledge, and a descendant of the gods.

It appears that the role of Ragnar has not yet been cast.

Mr. Byrne’s participation is likely to be connected to his long-standing support for Irish film. The series is an Irish/Canadian co-production:

The series will be filmed at Ashford Studios, a newly built studio facility in Ireland. Ireland has been home not only to such acclaimed recent TV dramas as The Tudors and Camelot, but also to treasured feature films such as Braveheart, My Left Foot, Excalibur, Barry Lyndon and The Spy Who Came in From the Cold.   All post production, visual effects, sound design and music composition will take place in Canada.

Every film and television outlet on the web is covering this news with anticipation, as are we (although our anticipation seems to fall more into the “stubbly and wearing animal skins” category):

Gabriel Byrne is about to make history.

Vulture.com [This article is usually not available on the web, so the URL has been unlinked. The entire article is below]:

In completely dazzling news tonight, Gabriel Byrne has been cast as one of the stars in the History Channel’s upcoming Viking drama Viking, the network announced. Byrne, making quite the leap from In Treatment, will play Earl Haraldson, the primary foe of the still-uncast king of the Vikings, Ragnar Lothbrok. It’s like we’re making it up from our dream journals! Except it’s real!

Usual Suspects actor Gabriel Byrne is steering this ship into uncharted territory for the cable network. He’ll play Earl Haraldson, a ruler in Lothbrok’s territory who wants to take the new leader on politically. Let the clash of the Vikings opponents begin.

Gabriel Byrne is in a plundering mood.

Running through Phoenix Park the other day I stumbled across a huge film crew shooting something smack bang in the middle of the park. It’s when you see a good sized production filming first hand that you realise just how many jobs it creates. Good news then that Gabriel Byrne is headlining a series called Vikings that will film right here in Ireland.According to The Hollywood Reporter, the series which will broadcast on The History Channel in the US, will centre on “Norsemen who raided, traded and explored during medieval times and follows the adventures of Ragnar Lothbrok as he rises to become king of the Viking tribes.” Bryne will play a character called Earl Haraldson, a “former warrior and the most important ruler in Ragnar’s district who clashes with the king.” Tudors writer Michael Hirst has penned the script, and he will produce the show alongside Morgan O’Sullivan– who worked on the same show. Byrne did superb work in the HBO serial In Treatment, and deservedly picked up an Emmy nomination for his trouble. No other casting has been announced as of yet.

Gabriel Byrne has been cast as Earl Haraldson in History channel’s first scripted series, Vikings, which premieres in 2013. Byrne will play a powerful figure in the historical telling of the Norsemen who raided and explored during Medieval times. He goes against the story’s protagonist, Ragnar Lothrok. Vikings is a 10-episode drama from MGM TV and The Tudors and Camelot masterminds Michael Hirst and Morgan O’Sullivan.

Since last week was so jam packed with upfronts announcing every new and returning show, unending trailers and press releases, this week has seen a bit of movement on the other networks gaining traction with their own original programming.  We’d heard a bit about The History Channel’s upcoming ‘Vikings‘ epic before, but now the network gives us ‘Treatment’ to their first major casting! The History Channel has announced its first major recruit for their upcoming original drama series ‘Vikings,’ that of Golden Globe winner Gabriel Byrne!  According to the report, the former ‘In Treatment’ star will play the role of Earl Haraldson. 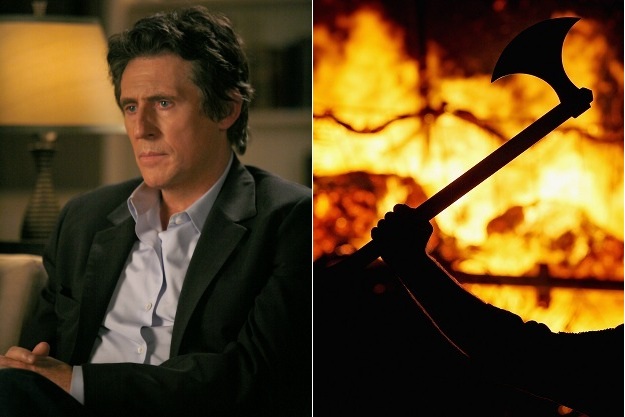 Screen Crush gets an “A” for the image they included in their article!

Gabriel Byrne is set to lend his award-winning credibility to History Channel’s new drama “Vikings.” The first scripted series in History’s history, “Vikings” was created and written by Michael Hirst (“The Tudors”) and will premiere in 2013. “Vikings” focuses on Ragnar Lothbrok, a lowly farmer who becomes the greatest hero of his age. Byrne will play Earl Haraldson, a ruler in Ragnar’s district who is concerned about the young upstart’s ambitions. Byrne joins the previously cast George Blagden in the drama, which will film at a newly constructed studio facility in Ireland before going to Canada for post-production. In his three seasons starring on HBO’s “In Treatment,” Byrne earned a pair of Emmy nominations and won a Golden Globe in 2009. His feature credits include “Miller’s Crossing,” “The Usual Suspects” and “Little Women.”

And while there is an intriguing entry for Ragnar Lodbrok in Wikipedia, there is no mention of Earl Haraldson, so it is possible that the latter is a fictional character, while the former certainly exists in the Nordic sagas. More  research is required!