When you really want to understand something, go to the original source.

Depending on the source, Gabriel Byrne was doing SOMETHING about end-of-life care in Ireland. To find out what that something actually was, I turned to the original source: The Irish Hospice Foundation, where all of my questions were answered, of course. Plus they provided a very nice picture from the actual event at which he was slamming, seeking, pleading, and helping…or, as the official announcement notes, making an impassioned case!

About the book mentioned in the press release below:

The Gathering: Reflections on Ireland is available at the Irish Hospice Foundation shop. You can choose “shipping within Ireland” or “shipping outside Ireland.” All proceeds will go to the IHF’s Design & Dignity project. Perfect for the holidays, yes? 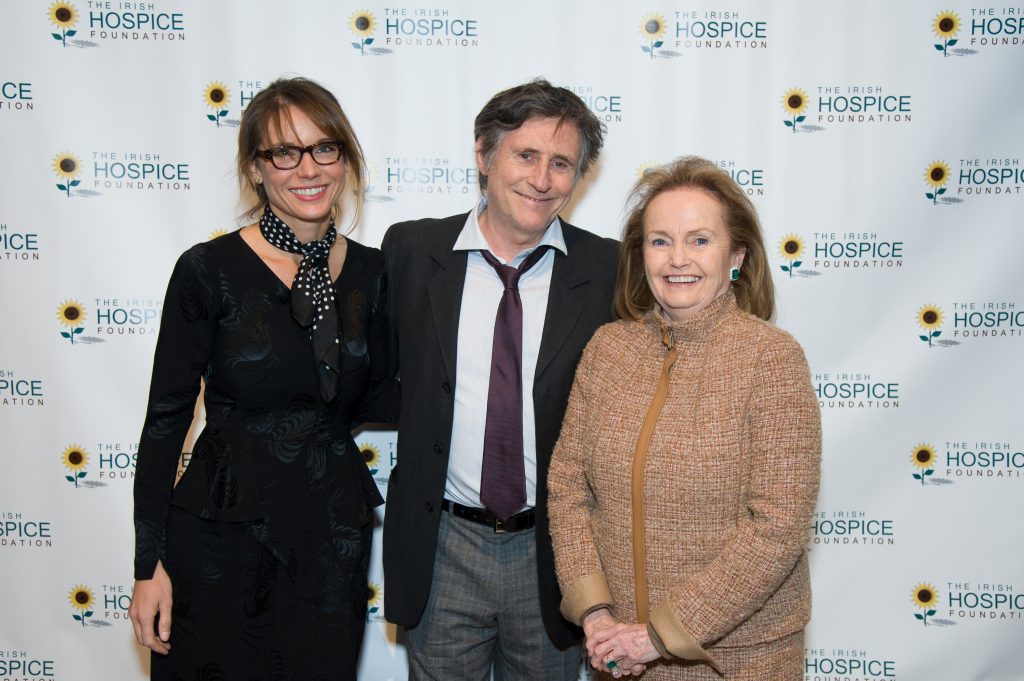 New York-based Gabriel Byrne has appealed for support for “the simple and transformational changes” taking place in Irish hospitals aimed at making death more bearable for those at end of life and for family and friends left behind. The work is being spearheaded by the Irish Hospice Foundation (IHF), the national charity which is dedicated to all matters related to dying, death and bereavement in Ireland.

The award-winning actor, who is also a Patron of the IHF, was launching the charity’s Design and Dignity Fund in the United States at an event in New York  (Tuesday 12 November 2013). The Fund is being used to redesign rooms in Irish hospitals to make them more sympathetic to the needs of people who are dying. The launch  was attended by other high-profile New York-based Irish supporters of the charity, including top-selling author Colum McCann.

The event in the 320 Park venue was hosted by prominent Irish Americans, Loretta Brennan Glucksman and Tom Moran, President and CEO of Mutual of America.

Gabriel Byrne said that the IHF had recognised that while nearly half of Irish people die in acute hospitals, the clinical culture and physical surroundings often add to the trauma for those at end of life and for their loved ones.  He was speaking from personal experience. “I attended the bedside of a friend who was dying in a Dublin hospital. She lived her last hours in a public ward with a television blaring out a football match, all but drowning our final conversation”, he said.

“I looked around this depressing place, with the cheap curtain separating her from other patients, walls painted nondescriptly institutional, the awful food, the ubiquitous smell of disinfectant mixed with human odour, and I began to think about the physical environment in which we might spend our final hours, that space which – as the late Seamus Heaney said – is “emptied” and “pure change” happens.

I have since come to believe that in hospital aesthetics are as important as function, that both are in fact closely linked. And that an aesthetic environment automatically leads to good practice and better care”, added Byrne. The actor confirmed that the IHF’s Design and Dignity project was already changing things for the better.

“In cooperation with hospital staff they are providing design expertise to create spaces where bad news can be broken, where those who have got the dreaded call to fly home to be with a loved one near death can have the space and the privacy for final words and where families can be with someone who has just passed away, in dignified and respectful surroundings.”

Writer Colum McCann spoke of the ‘rawness’ of the journey that so many emigres have to make back to Ireland to say goodbye to someone close.  “When you lose a loved one and when you know that person is being looked after well, it’s so much easier to return”, he said. “It is also much easier to come back to your other life”.

The Chairman of the Design and Dignity project, Michael O’Reilly, told the event that when people are beyond cure it becomes ‘a sacred obligation’ to attend to death with care and dignity.

“This is something we know, instinctively, we should do but somehow we forget – or we become distracted by the technology of ‘cure’,” he said.  “We know too that a committed focus on dying with dignity becomes self-sustaining once the principles are embedded and the right environment created.”

“That’s what we’re about – showing how it can best be done – one room at a time.  We have completed pilot projects in eleven Irish hospitals. Our dream is  to reach hospitals in every county in Ireland. As a charity, we need financial support to see the work through,” he added.

Proceeds of new book to go to Design and Dignity project

The new book from the Irish Hospice Foundation, ‘The Gathering – Reflections on Ireland’, was also launched at the event with all proceeds destined for the IHF’s Design & Dignity project.  The 256 page, hard back book, is edited by journalist Miriam Donohoe and designed by Steve Averill, widely acclaimed for his work with U2. It is full of striking images and compelling stories from The Gathering 2013 –  the  year in which the diaspora have been returning  in great numbers to cities, towns and villages in Ireland. The book also features inspiring reflections on Irish identity from some of the Ireland’s best writers and influential Irish American leaders. Bono and Colum McCann are contributors to the book as are Moya Doherty, Brian O’Driscoll, Loretta Brennan Glucksman and Niall O’Dowd. The late Seamus Heaney also donated a personal reflection just before his death.  His widow Marie Heaney and daughter, Catherine Ann attended the launch.

The IHF is the national charity which is dedicated to all matters related to dying, death and bereavement in Ireland. To find out more about the work of Irish Hospice Foundation and how you can help, please contact: Grace  O’Sullivan grace.osullivan@hospicefoundation.ie Tel: +11 353 167 30068 (office direct dial from USA) +11 353 857408098 (cell)

“The Gathering – Reflections on Ireland” is retailing at $30 and is available to order on the IHF website. All the contributors, the editor and the production team worked pro bono.  The book was sponsored by CIE tours, Glen Dimplex, Investec, Irish Ferries, KPMG and Powers Irish Whiskey.

Gabriel Byrne’s article, Design project grants dignity and grace to end-of-life care, provides useful background on this project that is so personally important to him. Be sure to check it out! 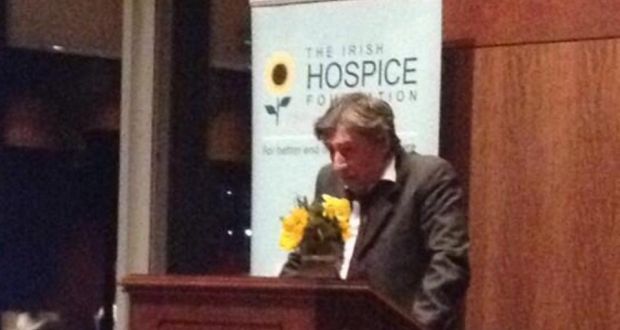 Mr. Byrne: making an impassioned case for death with dignity
at the Irish Hospice Foundation event in NYC

Here are links to the reports in the Irish media about this event:

The Journal.ie: Byrne: Help people in Irish hospitals die with dignity; The Hollywood star was speaking at the launch of the Irish Hospice Foundation’s Design and Dignity Fund in the USA.

I know Mr. Byrne is speaking from his heart when he supports improved end-of-life care in his home country. But I wonder if he realizes how much his support for this cause–and his words–touch his fans and those who care about both him and this cause. Many of us have faced the deaths of loved ones, in hospital or at home, and we know what he is talking about. Kudos to him (which he does not need or want, but which we give to him anyway) for speaking out, enlightening us, gathering support, and making real in-roads to improve this situation!