ALL THINGS TO ALL MEN : UK Premiere and More!

Today is the big day! 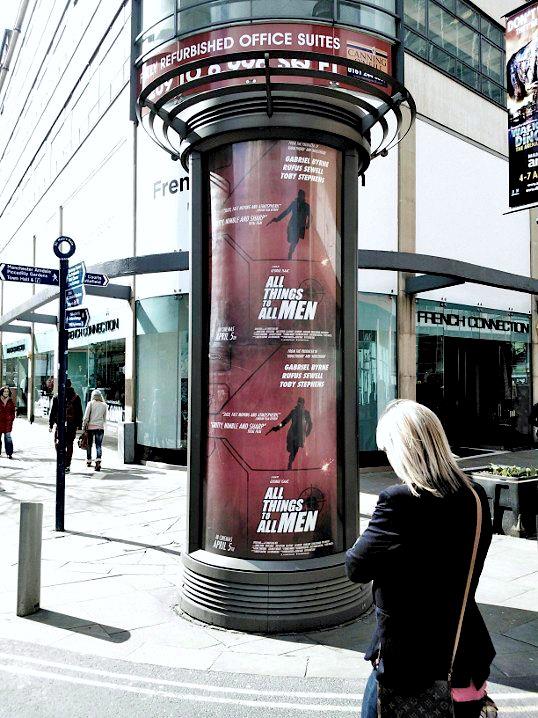 (George) Isaac wrote and directed the film and Byrne was wowed by his enthusiasm for the project.

“He was absolutely passionate about it, and I always respond to passion.”

“When somebody really believes in something it makes me want to go on the journey with that person,” says Byrne.

“It was wonderful to experience such an unbridled enthusiasm.”

The Dubliner was thrilled to get to work with Julian Sands, who he had worked with on Ken Russell’s film Gothic back in 1986, and also the film Siesta with Jodie Foster the following year.

“A lot of my scenes with Julian in this film are the two of us driving around London in a Rolls Royce,” he says.

“Julian was driving, I was sitting in the back and we drove through the traffic in London in this huge Rolls Royce with people shouting ‘F**k you!’

“So Julian and I were trying to justify that we were only in a movie and we’re really not the kind of people who normally drive around in a Roller.

“At one stage we drove around the block and I said ‘Julian keep going, let’s just go on the motorway and keep going to Brighton. What can they do?’

“It was very tempting to just put the boot down and keep going.”

How can they talk about Siesta without mentioning Ellen Barkin? Anyway, I loved the “Roller” part and the entire interview is great, so give it a read!

George Isaac is the producer of the commercially triumphant British films Kidulthood and Adulthood, and makes his debut as a writer-director of this London crime thriller. Perhaps against the odds, it’s a smart, engaging film, hitting a confident stride right away, and coolly proprietorial in its attitude to London, taking on the big, iconic locations without looking touristy… By nicking a medium-level villain Mark Corso (Pierre Mascolo) on charges that he can withdraw later if he wishes, Parker has a leverage on his father, crime lord Joseph, played with menace and gravitas by Gabriel Byrne.

Admittedly it’s not perfect, but All Things to All Men is still a pretty slick, fast-moving and atmospheric crime thriller, lensed quite stylishly and very effectively on some of the capital’s more interesting non-tourist spots to suggest the way of life here in 2013. The eye-catching photography by Howard Atherton really captures the flavour of living, and working, and indeed enjoying the crime business from both sides in our mean streets. This gives the film texture and makes London one of the bright stars of the movie…

Sewell, Stephens and Byrne slip comfortably in their characters like they’re putting on sleek old leather gloves. They have nicely written roles and actors as seasoned as these don’t mess this up. And there’s good work all round from Terence Maynard as another rogue cop, James Frain as the Attorney General, David Schofield as the Police Commissioner and Julian Sands as Byrne’s henchman. I said it’s strongly cast and the actors here are much better used than the Welcome to the Punch lot.

There are several more that have just popped up today, but they are from small outlets and the reviews themselves are very short–and primarily negative.

So, we all need to see the film for ourselves and discover just how WE feel about it.

One more picture to whet your appetite: 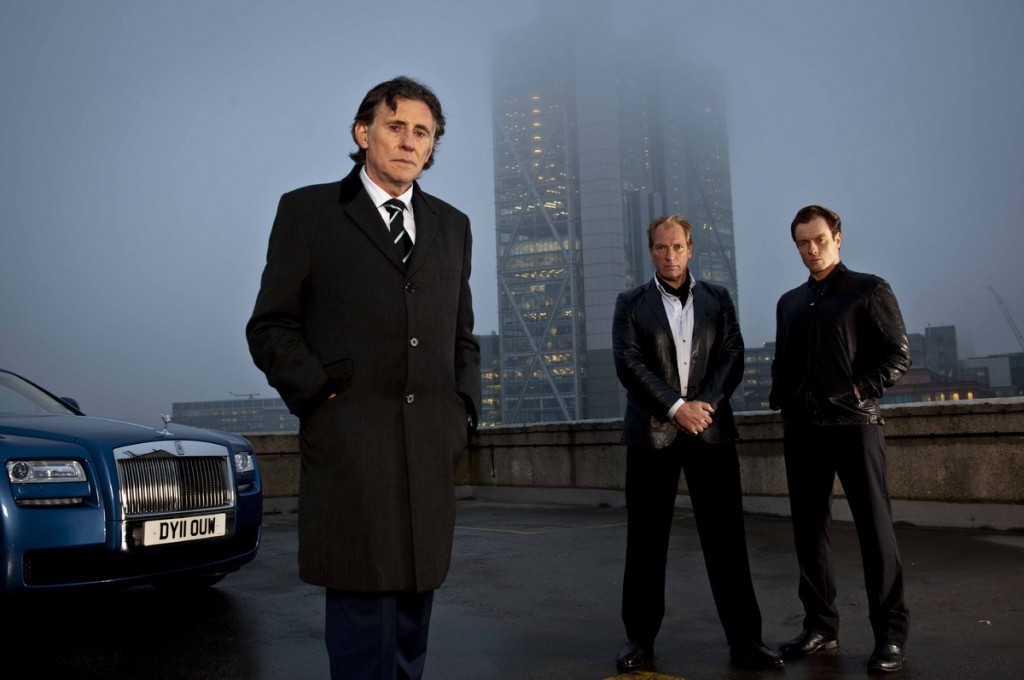 Men in Black: Gabriel Byrne, Julian Sands, and Toby Stephens. Thanks to Moondreamer for this picture!

Here is more artwork from the amazing Paul Shipper and a Tweet that will leave you laughing! The reviews for the film that have been published so far are, shall we say, “lame,” so I am waiting for more mainstream reviews before bludgeoning you over the head with any of them.

In addition, Mr. Byrne has been heating up the news with a couple of interviews, one in the Sunday Times UK entitled What I’ve Learnt (which, in the US, would be “What I Have Learned”…) and another in the Irish Times which has been picked up by every Irish outlet known to the Irish: Byrne describes the Catholic Church as a “force for evil”. Amazingly, this was published on Easter Sunday. At any rate, now everyone knows his latest film is out on April 5!

If you are on a bus in the UK, you might see this! Artwork by Paul Shipper 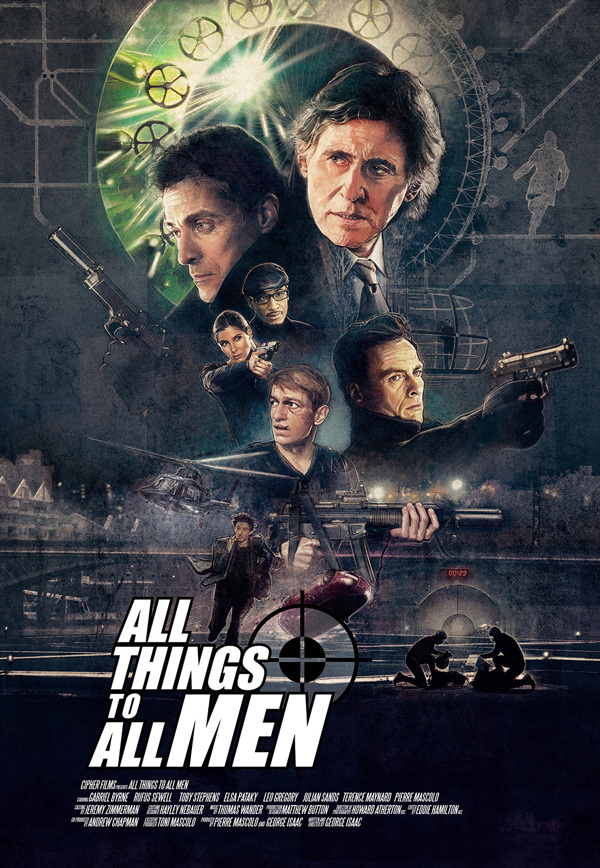 We obviously love the variant poster because of this: 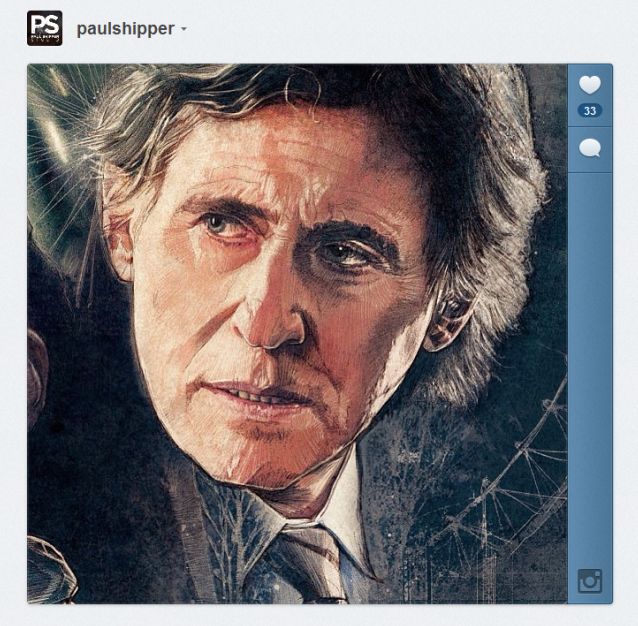 Gabriel Byrne in All Things To All Men, by Paul Shipper

One last Paul Shipper related-item: the main poster he has  made for the film is popping up all over the UK. Here is another example: 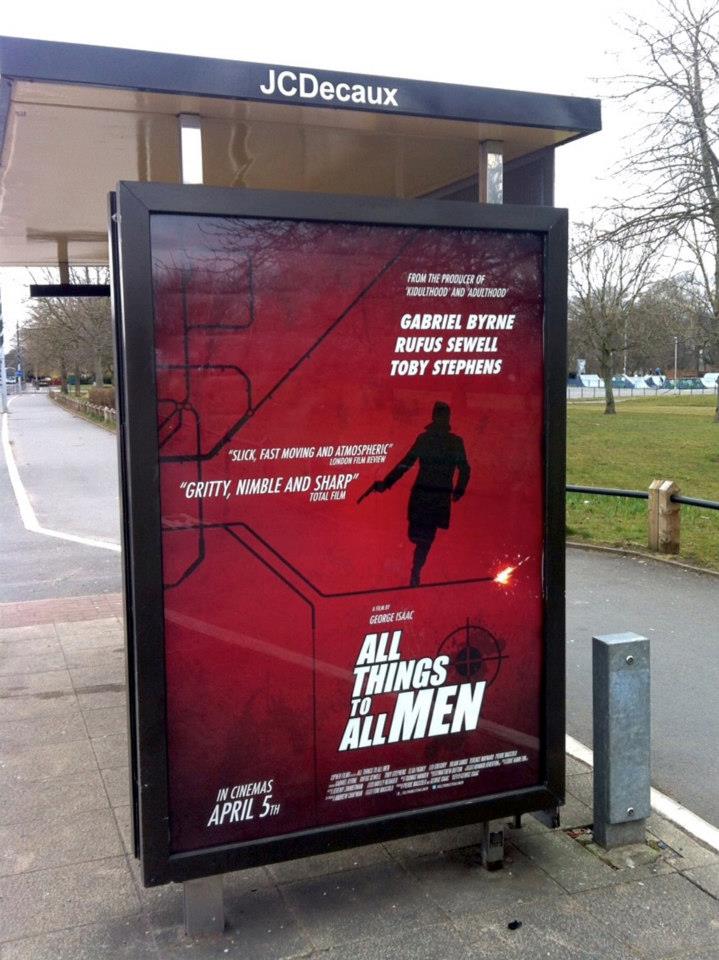 Shirley Hepworth had me laughing out loud with this today:

All Things To All Women Indeed! I don’t know if this is going to be a great film or not, but it will certainly be watchable! I have a feeling I will have to wait for the DVD to enjoy all of these guys on the screen, but then again, a glass of wine in the comfort of my own home while enjoying All Things To All “Women” sounds like a great night to me…

All Things To All Men will be premiering in London on April 5. We have been waiting for this film for a long time and now it is here. What a cast! I am not sure if this will be a guy’s action-packed weekend flick or a “chick” flick for women of all ages who find the lead trio, plus more gorgeous men, oops, I mean accomplished actors, too tempting to turn down. Of course, with George Isaac at the helm as both director and writer, this could be a slick drama with lots of unexpected twists and turns. Perhaps it will be all three!

Here is the most recent trailer which offers more clues to the plot. And Gabriel Byrne in that cashmere coat… 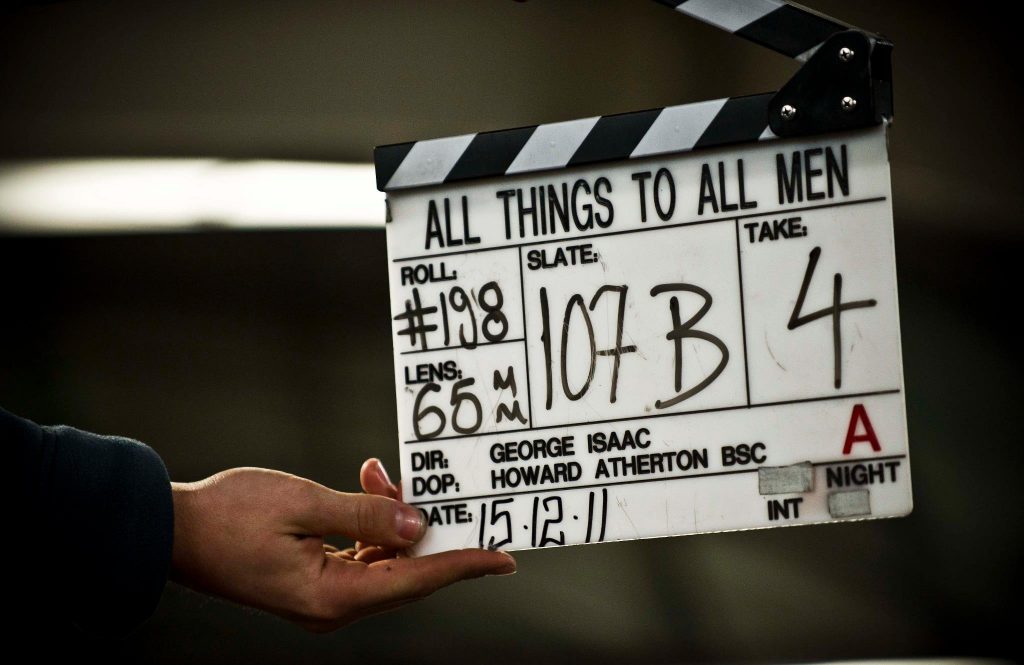 And here is the new official poster! 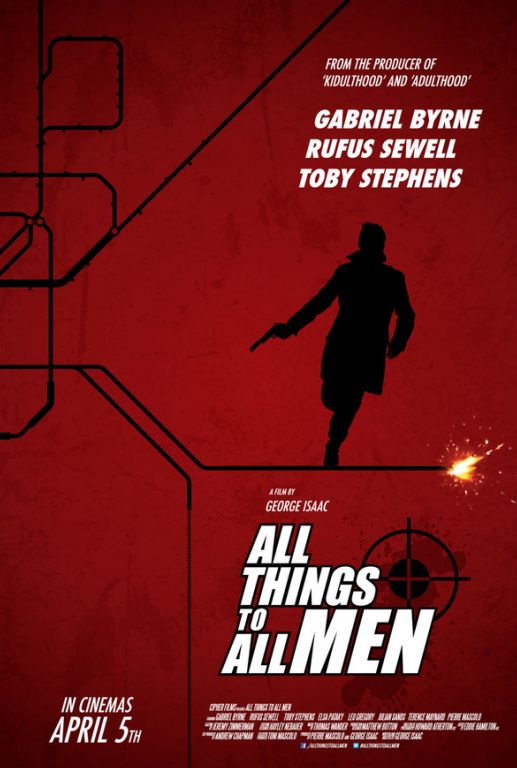 I discovered this via Twitter. The poster was created by Paul Shipper (Twitter: @paulshipper) and he shared it with me. You can visit Paul’s website at Paul Shipper Studio and see all of the amazing film posters and film art he has done over the years. I immediately fell in love with several of his works!

Paul’s uncle took this picture of the poster in the London Underground: 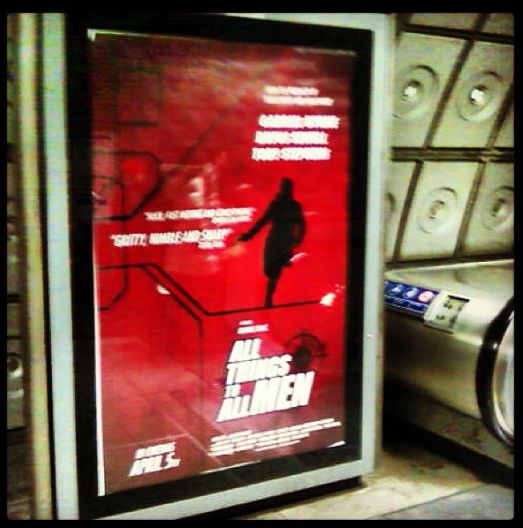 And finally, here is one of the first reviews I have seen so far and it is terrible! Not the film (well, the reviewer thinks the film is terrible, true), but the review itself. Film criticism is really on the down slope these days! Sigh.

More information about this film is available at IMDB.

And here is a triptych of Mr. Byrne in character to whet your appetite!