“I went and found you. It is very different.”

Is it Spring in Paris? It should be, although I think I heard the sound of thunder in the distance. No. That was the un vrai coup de foudre, the true thunderbolt of Gabriel Byrne and the opening of Le Temps de L’Aventure on Wednesday.

Emmanuelle Devos, his partner in this romantic story and an actor I have admired for a long time, has been representing the film, its director Jérôme Bonnell, and Mr. Byrne beautifully in the press, in radio interviews, and in online articles, and the reviews are beginning to pop up like spring flowers all over the place. Ok. I’m mixing metaphors and traipsing off on tangents here, but I am sure you will forgive me. Hearing what Ms. Devos has to say about Mr. Byrne will do this to a Byrneholic.

These reviews and interviews are all from the French press and are being shared in translation with us by fans, often without links. So I am providing some quotes here in the spirit of sharing the Spring Fever. I would not do this ordinarily, but since I do not speak French, I am dependent on those who do, particularly Angelle and Moondreamer, and I thank them! 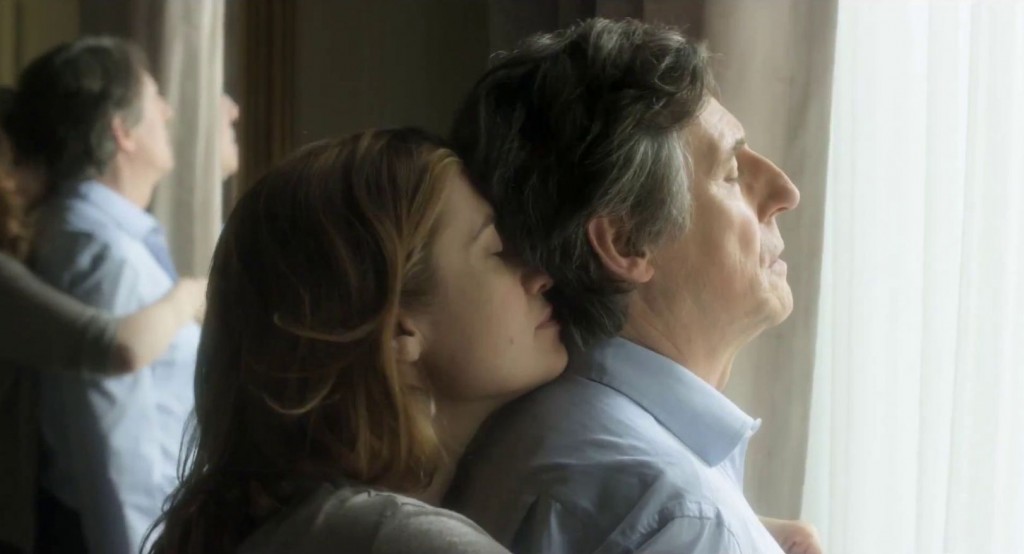 In one interview, Emmanuelle Devos said this about Gabriel Byrne:

“All those scenes with GB , my heart was beating, beating, just like in those moments when one is falling in love.” (…) The interviewer asks : Is that the GB effect? ” Gabriel, he is handsome, he is handsome ” (yes she said it twice) “its unbelievable. He has an incredible presence. He has a romantic, mysterious nature. Like out of an Emily Bronte novel. He is shy and reserved, and I think that he was very scared of the love scenes. He did relax afterwards.” – April 10, Paris Normandie.fr (from a comment by Angelle at the Byrneholics website)

“Opposite Emmanuelle Devos, Gabriel Byrne is simply perfect, all restraint, elegance, grace.”  (from a comment by Angelle at the Byrneholics website)

And in another review:

“Gabriel Byrne pierces our hearts with his silent emotions, a furtive glance (you just have to see how the palette of feelings creeps across his face like a shadow at the start ! ) (…) We are moved by every breath they take.” (from a comment by Angelle at the Byrneholics website)

From the interview/review at Evene.fr Cinema noted below (citation and Google translation provided by Moondreamer in the Forum):

Interviewer: And to play in English, did it frighten you?

Ms. Devos: I have always had a lock with English. But I worked with a great coach, the one who takes care of Jean Dujardin. She is responsible for the two most dramatic cases of French cinema. And she has done wonders … Finally, I had fun playing in English, which is still the language of cinema. Some phrases in [the film], I think I would not have been able to pronounce them in French.

Ms. Devos: “I will have to go” sounds still much better and more romantic than “You really want me to go” … Our imagination is so built: in English, we immediately took to Scarlett O ‘ Hara (laughs). Still, I had the chips. In addition, my voice tends to rise in the treble when I speak English. So, Gabriel Byrne called me “My Little Mouse.”

Here is a video clip from the film (a brief snippet shot in the theater–many thanks to Marisa for finding this!):

Le Temps de l’Aventure from Anatomy of Movies on Vimeo

Here is my favorite Google Translation of a review for this film (from Le Parisien, see above–and I apologize to them, but this is priceless and wonderful–even in fractured English!):

What is it about your room? “Sacha Guitry once asked his young visitor. “This is a man who meets a woman,” replied the latter. Guitry then exclaims, “I know enough! “Bonnell Prize winner Jean Vigo in 2005 for” Clear eyes, “do not know maybe this anecdote, but it sticks perfectly to his fifth film,” Time for adventure, “which speaks fairness, decency and concern for what is beyond us.

While modesty Alix is an actress. It runs between Calais and Paris where she plays where she lives. Doug is English. It is because in France for burial. Train, and both eyes are found in the balance throughout their lives. Compass Alix panics. Doug that resists a bit before losing the north. Nothing is explained, much less explained in this film while modesty, self-seeking incandescent involved who loses wins with destiny.

In 2007, Bonnell had worked with the bomb sensual what Emmanuelle Devos, outsized actress Nathalie Baye, who shares the privilege of representing the charm of the French woman. Amusing detail, the film is called “I’m expecting someone.” This time, in this story that takes place over one day, nobody waits for nobody and that’s what is exciting. If “adventure time” is the romantic movie par excellence, it is because he transgresses this last poem Antoine Pol “the Passantes”, sung by Georges Brassens. And it touches more than just, not without humor, the beauty of a love story, a thunderbolt dangerously dreamed.

And now you know the origin of the title of this posting! 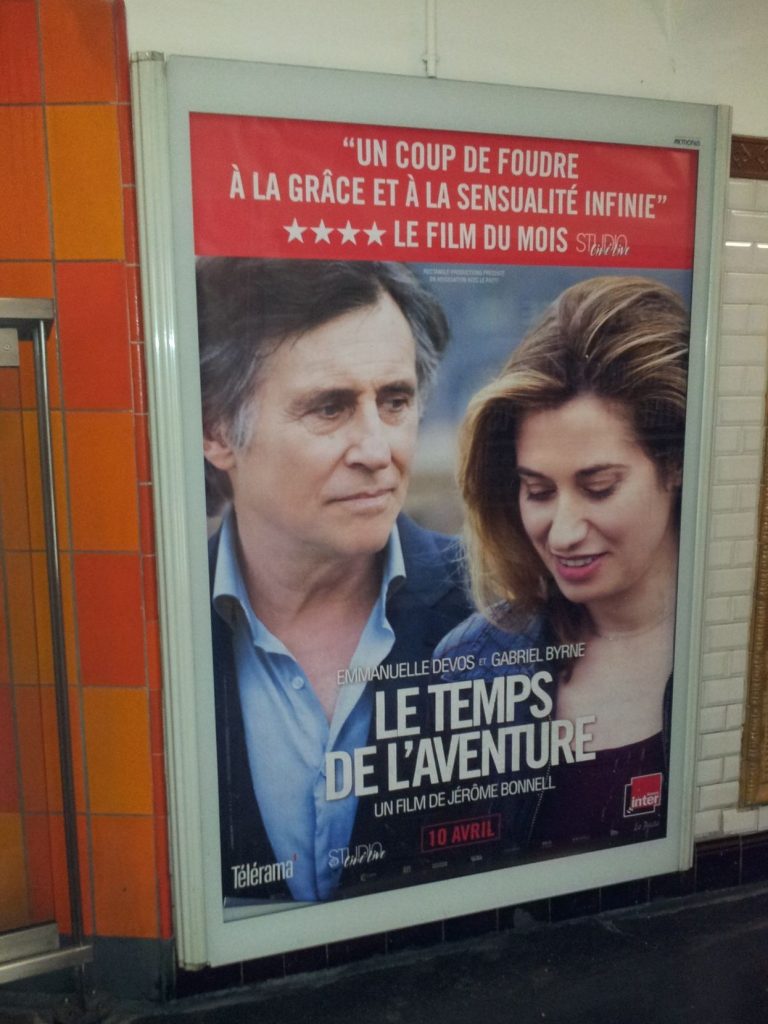 And finally, here is  a more complete excerpt from the Paris Normandie.fr interview with Emmanuelle Devos (Warning: Google translation) [This article is no longer available on the Internet]:

Ms. Devos: “It is a cliché. Actors lie, it was Diderot put it in people’s heads. Absolutely not. Players, when they play, are closer to the truth. That the character of the situation … If it is not, it is a disaster. Of course, this is not our life, our history. It is still our words, our feelings. To tell you, when I was shooting this film, I thought the end of each decision: “I will die …” Because it put me in a state … I feared a heart attack. All the scenes with Gabriel Byrne, my heart beating, beating, as effectively when you fall in love with butterflies in the stomach. The feeling of love, something bigger than me grabbed me completely. ”

Interviewer: And the Gabriel Byrne Effect?

Ms. Devos: “Gabriel, he is beautiful, he is beautiful … it is unbelievable. He has an incredible presence. There’s something romantic, mysterious … He is from a novel by Emily Bronte. He is very shy, reserved, and I think he was very scared of kissing scenes. He relaxed after. ‘

Interviewer: It’s hard to come back to reality?

Ms. Devos: “Obviously, my mind was the difference. You do not become crazy to believe that this is our life. All actors have a double brain. There are those who let themselves go, going fully into the situation, and those that maintain control. Because when you cry, you’re overwhelmed with emotions, but there is still a camera that shoots you, a text to say, marks to follow … and it should still be super true. It’s a job.” 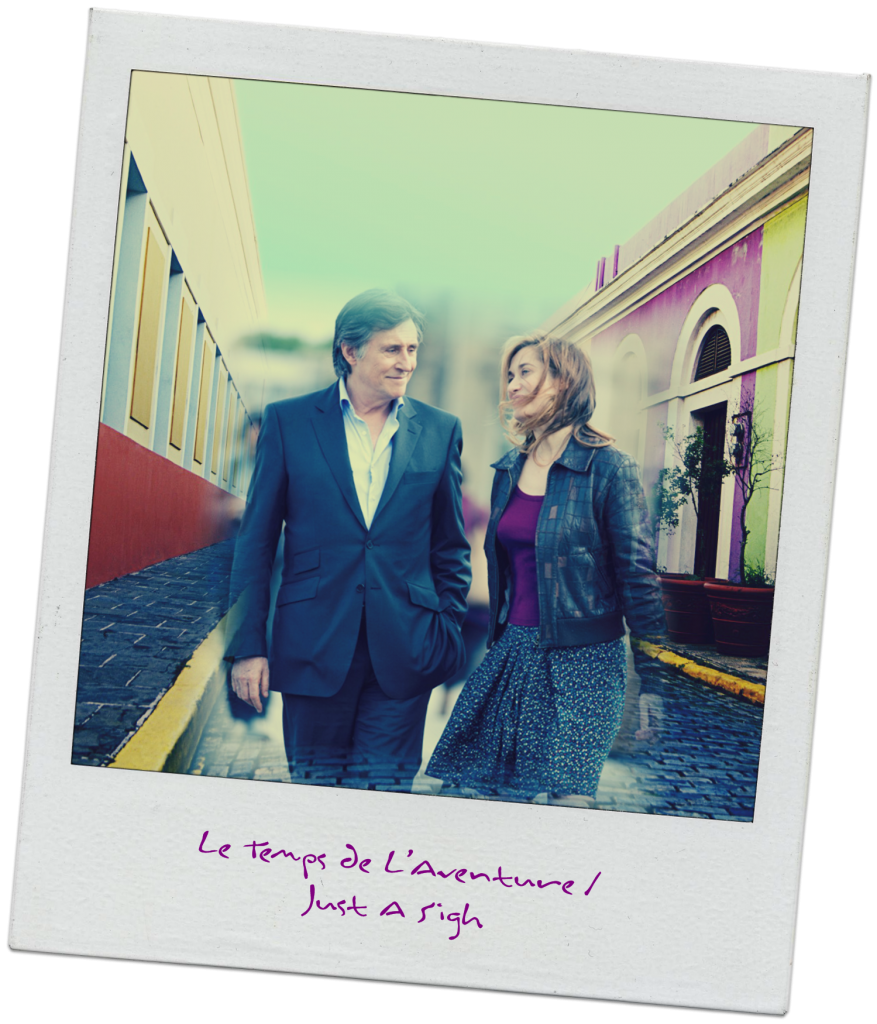