August 29: Screen Daily reports that the project has been “postponed indefinitely.”

A month before principal photography was due in the US and Germany for Norwegian director Joachim Trier’s $6.6m (NOK 52m) Louder Than Bombs, Norwegian production outfit Motlys has postponed the project indefinitely, having failed to provide the full financing for the Norwegian-Danish-French-US co-production.

“Unfortunately we could not make it in time, and have accordingly decided to end the ongoing preparations in New York – we are sorry we came to this conclusion so close to the start, and would like to apologise to the director, actors and everyone else involved,” said a statement from Norwegian producer Sigve Endrésen’s company.

“However, we are confident that the project will be realised in the near future”.

Mr. Byrne has projects in the pipeline that we do not know about yet, so stay tuned to see what happens next! And if he chooses to take some time away from acting, then perhaps he will work on Book 2, which would be a wonderful thing…

The filming of Louder Than Bombs has been postponed due to financial problems. As reported in the Norwegian publication Dagbladet and paraphrased in translation by our Byrneholics Norway Correspondent, Nora:

We did not succeed in finding enough money in time to make the movie. So the work in New York on this movie is stopped. But the production company hopes that the movie will be made later.

Director Joachim Trier says in an earlier press release: “Louder Than Bombs is a character driven movie so I am very excited about having so many incredible actors with me on this. Isabelle (Huppert), Jesse (Eisenberg) and Gabriel (Byrne) are all actors that I have wanted to work with for a long time. That they shall act together as a family feels fantastic.”

The film should have started filming September 25 and was scheduled to premiere in 2014. 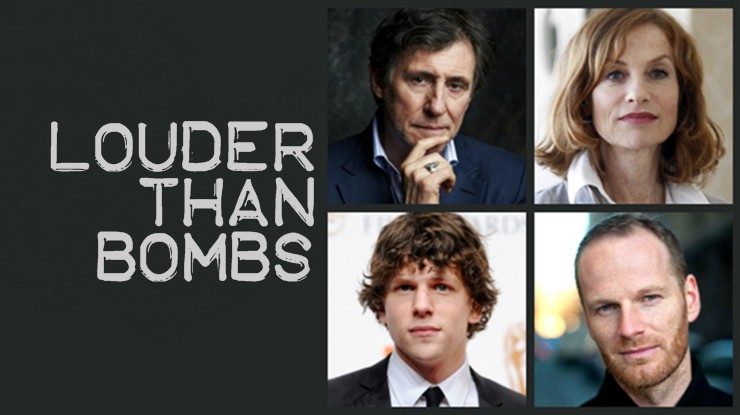 Here is the Google-translated text of the original article provided by Moondreamer in the Forum. I have not altered it because it is just too hard to try to change this into vernacular English, so you are warned:

Trier’s big film exposed
– We could unfortunately not in time to fully finance the film.

In the summer it was announced that Joachim Trier’s large American family drama has a total budget of 52 million , and the Norwegian Film Institute gave NOK 13.3 million in subsidies to Fill ‘new feature film “Louder Than Bombs”.

Now it is clear that the film is postponed due to lack of funds. It writes Lens in a press release, that film journal Rushprint reflects on his website .

We could unfortunately not in time to fully finance the film as we had thought, and therefore choose to end the ongoing preparatory work in New York. We are sorry that we came to this conclusion as close to the start and apologize to the director, actors and everyone else involved, writes Lens press release according Rushprint.

At the same time points out the production company a great interest in the film, and that they strongly believe that the project will be realized.

There is a number of famous actors Trier has been joined in making it. Through Screen Daily was in May announced that it is Isabelle Huppert, Gabriel Byrne and Jesse Eisenberg to play in Trier’s English-language debut ‘Louder Than Bombs’, which Memento films, which will produce family drama, confirmed in a statement.

“Louder Than Bombs” is a character-driven film, so I’m very excited to have such amazing actors in this. Isabelle, Jesse and Gabriel are all actors I wanted to work with for a long time. That they will play together as a family feels great, Trier said in the press release then.

Huppert is known from the French-language film “Amour”, which makes “Kon-Tiki” at this year’s Oscars.

Byrne has tied another won the Golden Globe for his performance in “In Treatment”, while Jesse Eisenberg became world famous when he played Facebook founder Mark Zuckerberg in the movie “Social Network” from 2010.

The recording was originally commence on 25 September , and the plan was that the film would be premiered in 2014.

“Louder Than Bombs” is a major project aimed at the international market. It is a family drama about secrets and Gene keeps life going along with his son Conrad after his wife Laura died in a car accident three years earlier.

A planned exhibition of photographs Laura makes eldest son Jonah feel obliged to return to his childhood home for the first time in a long time, and that’s when an uncomfortable truth that far too long have been kept from forcing their way into the light.

And from Anonymous, a dear friend in the business, there is this extra insight about the situation:

I just called a former colleague of mine, who works for the German production company that is involved in the Louder than Bombs project and it is indeed true. This project has been postponed due to budget conflicts.

There are five different countries involved and that means five different styles of funding as well, which makes it very difficult sometimes to cope. Now they’re running a little short on money. Meanwhile helmer Joachim Trier is writing another film, which is much smaller and therefore easier to handle. He has done this before, when his earlier pet project was postponed. Then he made  Oslo.31st August. He’s a little disappointed now but still optimistic about Louder Than Bombs.

But the good news is: It’s not cancelled, just postponed. They received a great deal of attention at this year’s film market from foreign buyers. Considering the promising feedback they got, this film WILL BE MADE, but not this fall. And – of course – the bigger concern is now about the cast. Since Eisenberg, Huppert and Byrne are all A-listers, it was a great effort to get them all together for this shooting in September/October and it will be much more difficult to match their calendars at a later time. So it could be that there are some changes in the cast, which includes Gabriel as well, but I guess he and Huppert are both very fond of this movie (though hey don’t have many scenes together). But Gabriel might be the father of different sons, perhaps not Jesse Eisenberg in the role, but Logan Lerman, for instance, might play this part. Who knows? Let’s just hope for the best.

So, I will leave you on this hopeful note! Delayed. Postponed. Not Cancelled.

Cross your fingers for this film NOW. If I knew where to send money, I would provide the address, believe me! This has the potential to be a great film and the idea of Gabriel Byrne and Joachim Trier working together is just so tantalizing and exciting. So, we will hope and think positive thoughts.

Many thanks to Nora, Moondreamer, and Anonymous for sharing with us! It is important not to “kill the messenger” when disturbing news hits the fan. Well, I’m so upset I’m mixing my metaphors, so thanks to you all and let’s hope the next news is good news!