Please note: There are revelations about Episode 6 of Vikings in this posting, so BEWARE! The episode has aired in the USA and most viewers know what transpired, but if you have not seen it, you can always read this later.

Episode 6 of Vikings held many surprises. One was the brief but memorable appearance of a slave girl belonging to Earl Haraldson (Gabriel Byrne). I had been anticipating this episode for several reasons, including the portrayal of this slave girl by Roanna Cochrane, a young British actress whom I found on Twitter, tweeting about Vikings and how happy she was to be a part of the series. She never once let on that her role in the series was so short–and I thank her for that! She made a very strong impression in her scenes and I am sure people will remember her. It was a sympathetic and dramatic performance and she carried it off brilliantly.

I was truly touched by Ms. Cochrane’s wonderfully believable portrayal of the slave girl. Of course, I was already crying because the Earl was gone, but she made it even more poignant! Thank you, Ms. Cochrane, for answering these questions and we all look forward to seeing you “survive” your next role!

And many thanks to Det. Logan for these great screencaps from the episode, which are downloadable!

Ms. Cochrane responded to these questions via email.

Byrneholics: Did you always want to be an actor?

Roanna Cochrane: I saw a home video of myself aged 7, the other day, and I said, “When I grow up, I want to be a jockey…or an actress.” Well, let’s just say I wasn’t a great jockey!

BH: You attended the Central School of Speech and Drama in London. What was your experience?

RC: When you are thrown together with 25 talented young people, you really up your game. It’s also a safe place to make mistakes before you’re out in the real world and I truly believe that you have to be open to failure in order to improve. Nothing can really prepare you for the industry until you’re out there. We’re always learning on each new job we do and I hope that never stops. 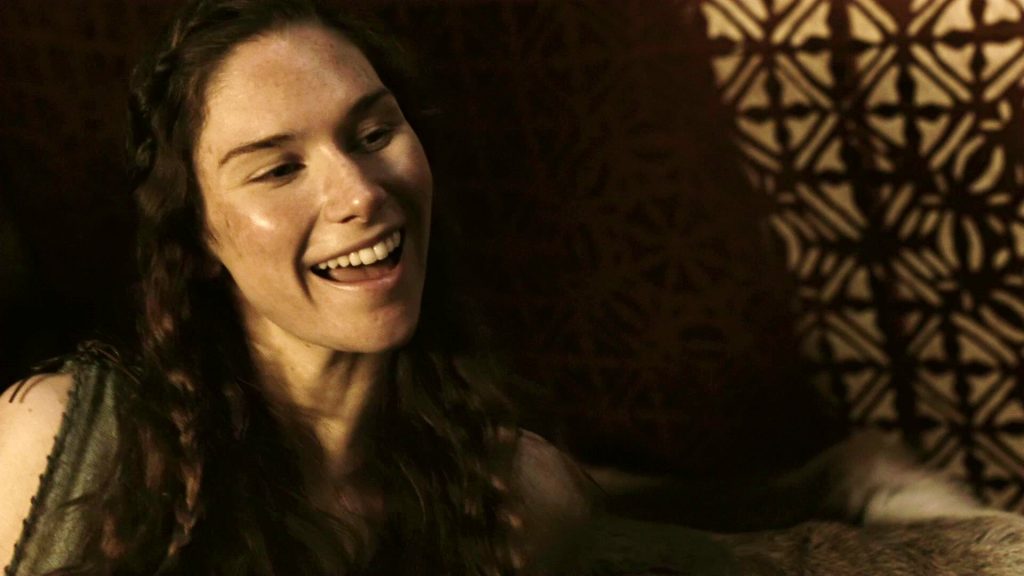 BH: Have you always lived in London? Is it fun living there or is it hard?

RC: I love London. I’m a city girl at heart. I grew up in Surrey, so near enough to commute into London and my Mum would take me to see West End theatre regularly. I’ll never forget seeing “Romeo and Juliet” for the first time when I was 9 years old and not knowing the ending!

BH: You had a part in “Mr. Selfridge.” Can you tell us about it? [Note: “Mr. Selfridge” is a mini-series currently showing on PBS in the USA]

RC: I only spent a few days filming on “Mr. Selfridge,” but I did get to work with Jeremy Piven who was lovely. But “Mr. Selfridge” couldn’t be more different to “Vikings.” The set of “Mr. Selfridge” was just beautiful, and those costumes – wow! The glamour of them was so different to the raw fabrics used in “Vikings.” Joan Bergin, “Vikings” costume designer, used a lot of fur, weaving, leathers etc, the Vikings’ clothing was about durability, warmth, strength.

BH: Are there any other roles you have particularly enjoyed?

RC: Helena in “A Midsummer Night’s Dream” comes to mind. I have been killed in the last 6 movies I have shot and it seems I can play a good victim. I have been murdered, buried alive, killed by a ninja, stabbed, choked on my tongue, been bitten by a snake and now, in “Vikings,” I have been sacrificed. At least Helena lives and gets the guy in the end. 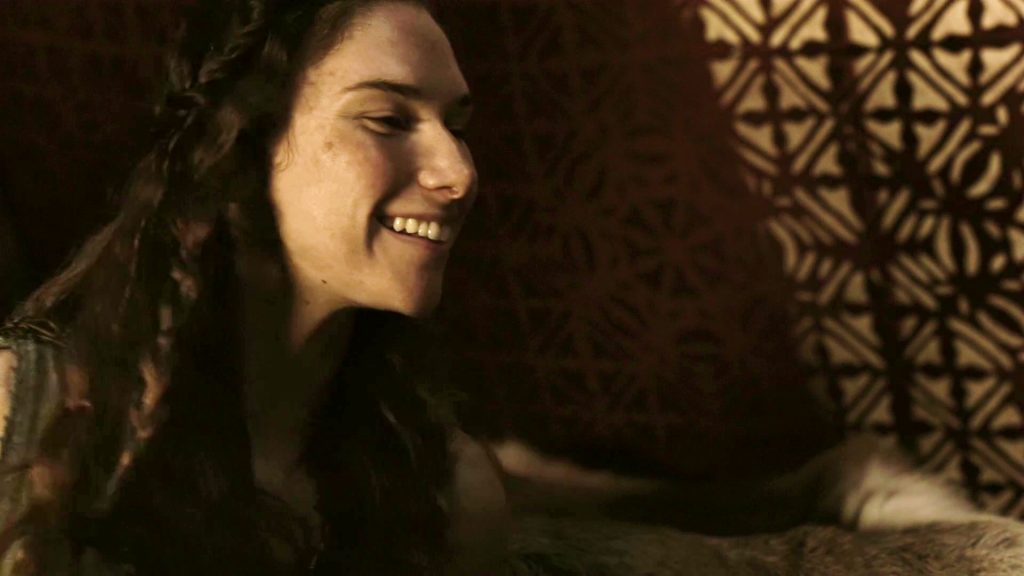 BH: What genres do you enjoy working on?

RC: I seem to have fallen into the period drama and mythical category with “Vikings,” “Mr. Selfridge” and “The Heart of Dicken Partridge,” an independent short I shot alongside Viking actor Clive Standen. But the goofy comedian in me loves a good rom-com.

BH:  In “Vikings,” you play a slave girl who decides to die along with her master. What was filming your episode like?

RC: Being on the set of “Vikings” was something else! There was a real energy; everyone was so focused and you could tell it meant a lot to everyone. And all the cast and crew were always in a good mood despite the torrential rain. My first day on set the rain was bucketing down and all the extras had to dance and splash in puddles; they were soaked but they were always smiling.

My character only appears in one episode, and as a supporting actor, you have to be sensitive to the style and the atmosphere of the piece. You need to fit into the world – keep in mind this is a very testosterone-heavy world – and I suppose the important thing is to have respect for the work that has already been created. You need to be willing to adapt what you have prepared as it’s all subject to change once you arrive on set.

BH: Did you have fun or was it hard work or both?

RC: Oh it was great fun. The dynamic in the actors’ green room was fantastic! Games of ‘Viking Scrabble’ and ‘Truth and Lies’ were going around as we were all huddled around the heaters. And Guinness definitely tastes better in Ireland. Hmm…I guess I haven’t mentioned any hard work there… 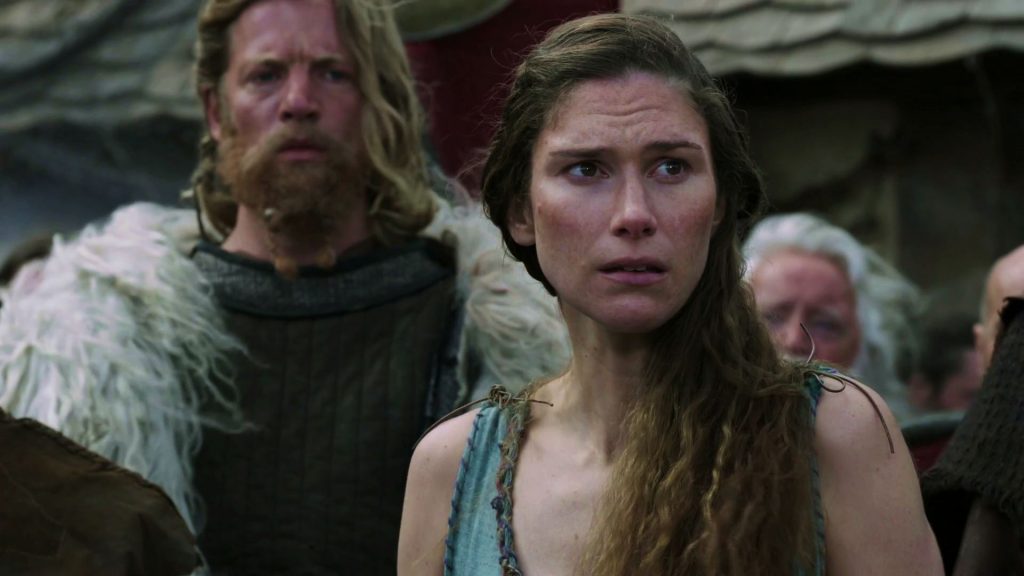 BH: Did you learn anything new?

RC: I found out a week before filming that the producers wanted my character to be Slovakian. So I got the chance to dive into a new accent and explore her culture: where she came from and what it would have meant to be captured by the Vikings and adopt their religion and culture. Michael Hirst’s attention to historical detail is impeccable in this series. I wanted to live up to this and immerse myself in the lifestyle, traditions, religion and culture of the Vikings.

RC: We shared a couple of hours in the torrential rain, shivering on our deathbeds! Actually Gabriel had the better deal, dressed in animal furs and leathers; I was in a sleeveless dress (albeit with four hot water bottles hidden underneath). Everyone on set spoke very highly of Gabriel and the women all thought he was utterly charming! What more could you ask of an Irishman? I hope to get the chance to work with him again, but then our characters are both dead. Perhaps we can stage the next series of “Vikings” in Valhalla? 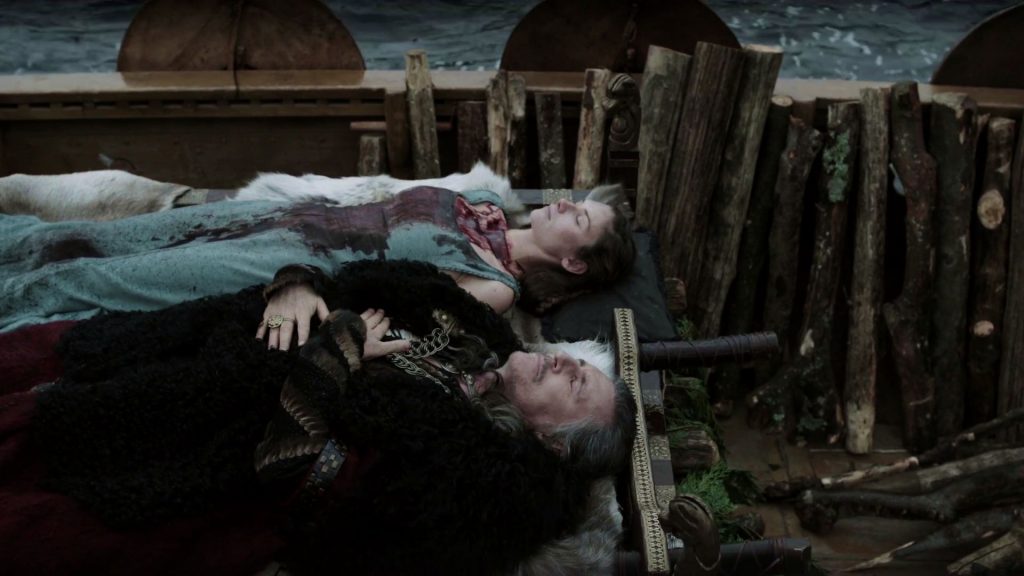 BH: What is next on the horizon for you?

RC: I just finished shooting a film called “Not Very Nice People” by Vermillion Films, which is basically a dark comedy with a masochistic twist. Not quite rom-com, but getting closer. And this time, I live!

Be sure to follow Roanna Cochrane on Twitter @RoannaCochrane so you can keep up with her schedule and activities!