VIKINGS : “Burial of the Dead”

And there is a recap of Episode 6 at the bottom of the page now. sad

Here is the new Inside Look for Episode 6–WITH SPOILERS!–provided by the History Channel. Creator Michael Hirst puts everything in perspective for us. Be sure to hit the Full Screen button!

And here is an interview from The TV Time Machine with writer/producer Michael Hirst, in which he discusses the genesis of the series Vikings, the casting of Ragnar, the history of the real Ragnar, and the remarkable Gabriel Byrne. This is an audio interview, so turn up your speakers!

Finally, two teaser pics provided by Take 5 Productions, the Canadian co-producers of Vikings, whom we thank: 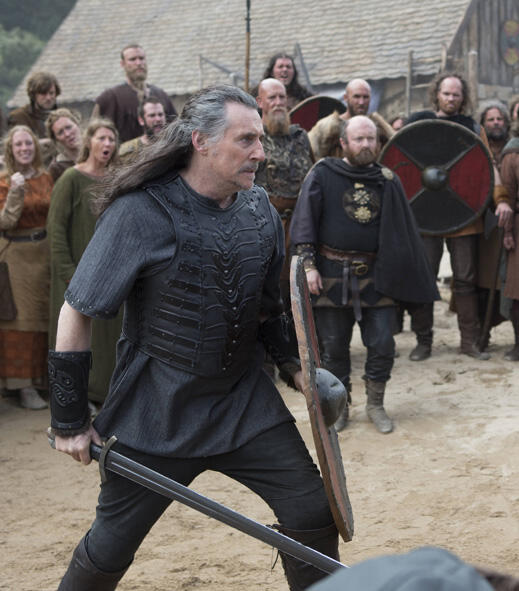 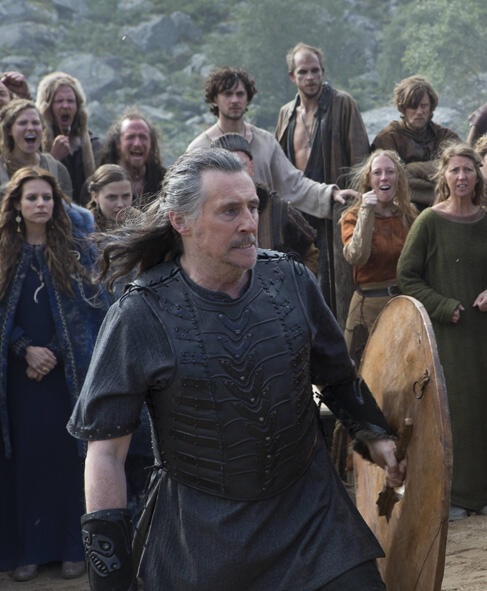 Mr. Byrne has obviously been paying attention in his sword and shield lessons! Looks like he will acquit himself well in what is being touted as the “Battle of the Vikings.” May the best man win.

Oh, this does not sound good.

A bit about Episode 5:

Since you ask, yes, I did live-tweet Episode 5. I can’t tell you how hard it is to do this: tweet while watching the action and the drama as it is unfolding. However, I must say this activity does force one to pay incredibly close attention and type one’s thoughts at the same time–rather like taking notes in a great class! As you will see, Episode 5 sounded like a chess match:

Stella Kuru @Byrneholics
The Earl makes the next move and it is unequivocal. #Vikings @HistoryVikings #GabrielByrne

Stella Kuru @Byrneholics
Ragnar cannot match the Earl’s harsh move, but he tries hard, like the hero he is. #Vikings @HistoryVikings #GabrielByrne @Team_Travis

Stella Kuru @Byrneholics
Ragnar is cunning and resourceful. The Earl has a real problem on his hands now! @HistoryVikings #GabrielByrne #Vikings @Team_Travis

Stella Kuru @Byrneholics
The tension keeps building! Where will it end? Episode 6 will tell us, it seems. #Vikings #GabrielByrne @HistoryVikings @Team_Travis

Oddly, I attract new followers with these tweets. I hope they will not disappointed when they discover what I am really tweeting about–not Vikings, but Gabriel Byrne…

In Episode 5, we learned some things about the Earl we did not know. We also see him at his Machiavellian best–if guise and ruses do not work, he does not hesitate to use the last resort of those in power: violence. And, of course, all this bad-assery leads viewers to tweet things like: “I can’t wait for the Earl to die!” “Off with his head!” “Kill Him Now!”

Fortunately, I can’t read all those tweets while I am tweeting, so I just keep tweeting for #TeamEarl.

I fear I will not be tweeting much longer, though. 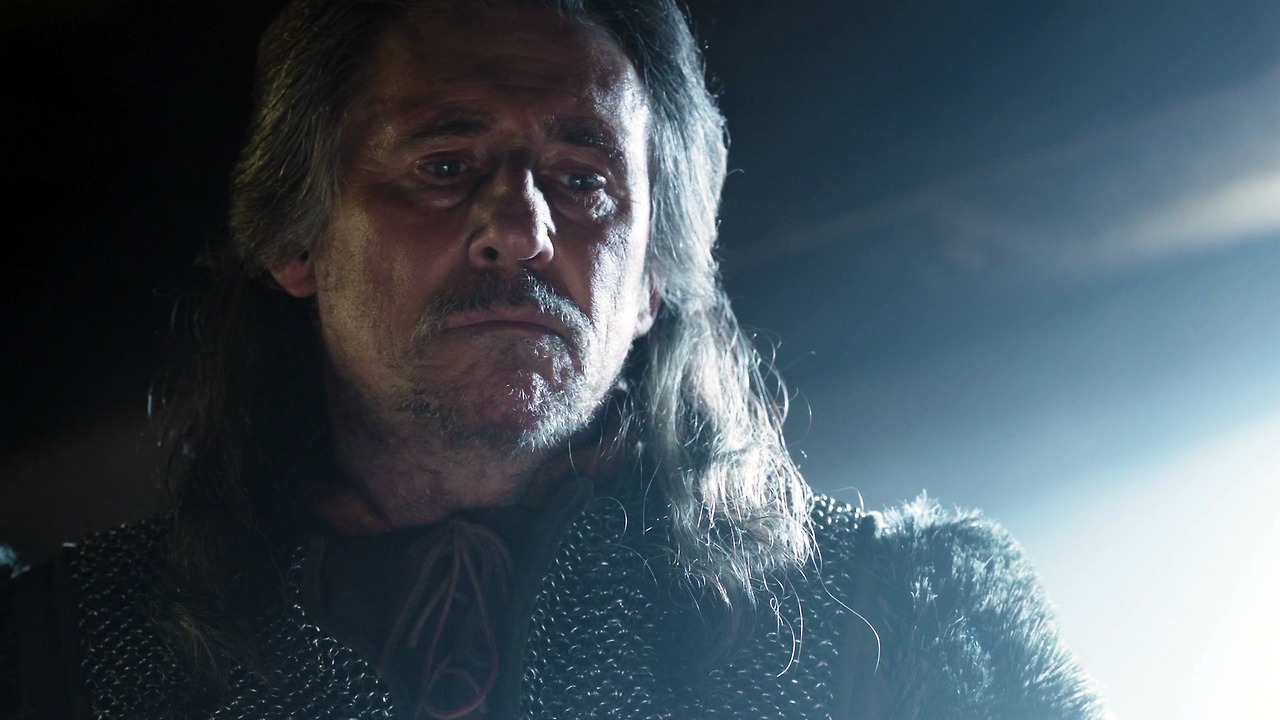 Screencap from Episode 5. Downloadable! Thanks to Det. Logan for this beauty.

Here is an interview with Jessalyn Gilsig, who plays Siggy, the Earl’s wife, from PressPassLA [WARNING: Some spoilers ahead, so be careful]. Ms. Gilsig hones in on the personal aspects of the Earl and his wife and how their shared history defines them and their actions–very different from playing chess!

PPLA: What was it like to work so closely with Gabriel Byrne for five full months?

JG: It was phenomenal. What a wonderful opportunity it was for me. When you see the show you see that a lot of the time I’m really just sitting beside him in scenes, and since those scenes would take all day to shoot that meant that I got to sit beside Gabriel all day which was a pretty good gig. From day one it was great. He let me know that he wanted this marriage to be real. He wanted it to be textured and he wanted it to have all the complexity of a 30-year marriage, since I figure we probably got married when Siggy was thirteen. We wanted it to reflect all of that. So as a result we spoke a lot about our characters and what had happened just before we entered a scene and what was gonna happen once we exited. He made it very clear to me that he was really open to the idea that even though he would be the mouthpiece when we were in the Great Hall, when we were out of the Great Hall we were absolute collaborators on our position in the community. In their relationship a lot of what I’m doing is silent and it’s a huge credit to him that we’re able to have those exchanges that are nonverbal yet so there and important.

PPLA: Did you draw inspiration from anything specific in depicting their complex marriage?

JG: We talked a lot about Macbeth and the Ceausescu and Marcos families – dictatorships that had these horrendous track records but who felt completely justified and almost as if their lives were sacrificed to lead their people. We also talked about our characters’ vulnerabilities and the idea that he would be impotent and I would be frustrated, so there was a human component as well as a larger than life caricature and that they were also just people who had wants and needs and wishes and hopes like everyone else. As an actor, that’s how you hope to go into every role and in this case I was just so grateful for that because they’re both complicated roles and we wanted to do them justice.

PPLA: Do you have any favorite moments or scenes related to Siggy from Vikings’ first nine episodes?

JG: One scene in particular that comes to mind is when Gabriel and I are alone in our bedchamber and we get into an argument. What I liked so much about it was that the themes of the argument are so large. We’re talking about war, marriage, vulnerability of the state and at the same time what’s driving the argument is this feeling we both have that we’re not connected anymore and a marriage that once had so much love and hope is now just flooded with pain.

PPLA: That argument is in tonight’s episode, titled “Raid.” In that scene Earl Haraldson tells Siggy how he found their sons buried, correct?

JG: Yes, and the fact that we had lost our sons was not only a strategic loss but was the greatest pain a parent could ever endure and one we would never recover from. It defines us as a couple. I think that is what’s so special about the writing and [series creator] Michael Hirst’s approach to the project. He didn’t want to romanticize who the Vikings might’ve been but rather humanize them by really exploring their actions as people, as opposed to as a concept. A big driving force for me was when Michael said, “If there’s one constant that transcends history and transcends culture, it’s that we all love our children.”

Burial of the Dead

Ragnar, weak and still hurt, must meet the Earl head-on after it comes to light that Rollo has been tortured on Haraldson’s orders. The two men will come together face to face with a single outcome possible: Only one man will leave this fight alive.