The premiere of Vikings was an exciting, fast-paced, and information-filled introduction to the world of Ragnar and Earl Haraldson. All of the major characters made their first appearances and we experienced life in the Viking settlement, with its lively population and intriguing traditions. Ragnar’s dreams for the future were quickly and deftly explained and his thirst for exploration was right there on his face.

The politically-charged encounters between Ragnar and the Earl paved the way for future confrontations. Earl Haraldson is the perfect counterpoint to Ragnar’s youth and brash new ideas. In the “dining scene,” some might be reminded of Denethor in The Lord of the Rings: The Return of the King. In this case, the Earl partaking of his dinner before a hungry Ragnar was not an exhibition of psychological pathology–it was a demonstration of political power. The Earl is quite comfortable in his powerful seat and sure that he can handle Ragnar. But we see the side of him that is not so comfortable, too, when he dreams of the deaths of his sons. A complex character is unfolding before us.

Ragnar’s brother Rollo is also more complicated than he might seem. And the Viking women–Lagertha and Siggy–hold their own quite well, thank you. The Irish scenery is stunningly beautiful and Floki is stunningly odd–in a good way! The ship he is building is lovely to look at and dangerous to sail. We are set for the next chapter.

Episode Two:  Wrath of the Northmen

The stage is set for the first journey west by Ragnar Lothbrok as he gathers a crew willing to risk their lives to travel into the unknown. Earl Haraldson’s paranoia reaches new heights as it becomes apparent that trust is hard to come by in this dark era.

You can watch the first two episodes–“Rites of Passage” and “The Wrath of the Northmen”–at the Vikings website. 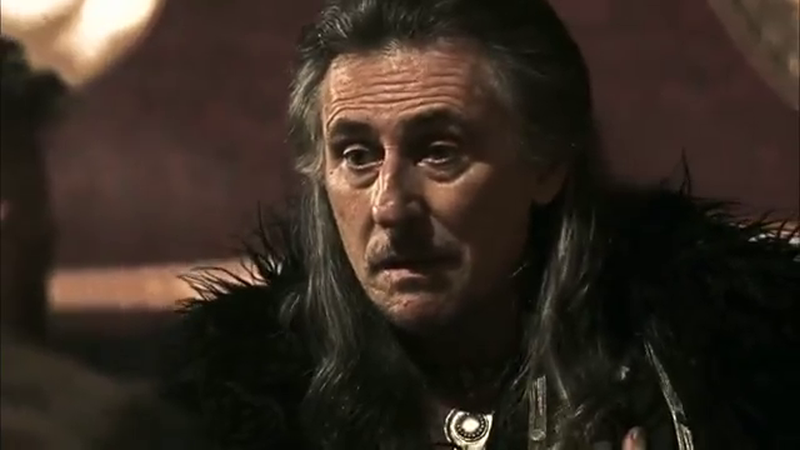 Gabriel Byrne as Earl Haraldson in “Vikings”: corrupted by power, haunted by memories

This press release tells the numbers story for Vikings. What a great story it is, too! So nice to see Mr. Byrne helming a ratings winner here in the United States. Go VIKINGS!

I am sure the press release originated at The History Channel, but I found it at TV By The Numbers:

HISTORY’S SCRIPTED SERIES VIKINGS PREMIERE: OVER 18 MILLION TUNED IN TO ALL OR PART OF THE VIKINGS ON SUNDAY NIGHT!*

#1 CABLE SERIES DEBUT OF THE YEAR

HISTORY #1 NETWORK IN ALL OF TELEVISION FOR THE NIGHT

The combination of THE BIBLE and VIKINGS propelled HISTORY to the #1 network in all of television for the night among total viewers.

*To clarify an earlier version of the release, the 18M number was meant in terms of total cumulative viewing regarding an audience that sampled at least a part of the program. Source: Nielsen Live+SD Reach, 3/3/12, 1 min qual. All telecasts.

“VIKINGS is an incredible win for HISTORY – our first scripted series. We began this journey over six years ago, when we set sail to broaden the genre of HISTORY and now we are the only cable network to have achieved this amazing level of success in both nonfiction and scripted genres,” said Nancy Dubuc, President, Entertainment and Media, A+E Networks. “People think they know the Vikings – but the reality is more complex. We knew our audience had an appetite for this unexpected storytelling and it was a big bet that paid off.”

HISTORY’s nine-part scripted series VIKINGS, airs Sundays at 10PM ET and tells the extraordinary tales of the lives and epic adventures of these warriors. The drama portrays the world of these Dark Age raiders, traders, explorers – not from an outsider’s view, but, through the eyes of Viking society.

While VIKINGS is filled with conflict, warfare and bloodshed – for these were extreme times – it is a family saga at heart. It follows the adventures of Ragnar Lothbrok (Travis Fimmel, The Beast, Baytown Outlaws), a curious, compelling  man who is always looking to break through barriers and discover new worlds to conquer. Ragnar is deeply frustrated by the unadventurous policies of his local chieftain, Earl Haraldson (Gabriel Byrne, In Treatment, Usual Suspects, Millers Crossing), who continues to send his Vikings raiders east every summer, to the Baltic states and Russia, whose populations are as materially poor as themselves.

VIKINGS is an international Irish/Canadian co-production being co-produced by World 2000 and Take 5 Productions. HISTORY will broadcast domestically in the U.S.  MGM Television will bring VIKINGS to the global audience, serving as the international distributor outside of Ireland, Canada and the U.S. VIKINGS is produced in association with Shaw Media, and the series will air on HISTORY in Canada.