Louder Than Bombs added new cast members and began primary filming in New York City September 4, with a completion scheduled for the end of October.

Deadline.com broke the news about the start date and the new cast:

Matt Singer, over at The Dissolve, tells us all about it [This article is no longer available on the Internet]:

…Trier, who also previously directed the superb drama Reprise, is making his English-language debut with a movie that kicked off production today in New York City. Titled Louder Than Bombs, the film has a great cast, too: Gabriel Byrne, Jesse Eisenberg, Isabelle Huppert, Amy Ryan, David Strathairn, and Devin McKenzie…

…it’s great to see Trier making some headway in the industry and getting an opportunity to work with some big-name talent (and possibly use some songs by The Smiths on the soundtrack). It seems safe to assume Louder Than Bombs will likely debut in the next year or two at one major film festival or another (Oslo, August 31st premièred at Cannes). And now you may return to your lives and whatever else you were doing earlier.

Read his entire posting–he is very funny and  obviously excited about this new film from director/writer Joachim Trier and screenwriter Eskil Vogt–as are we! 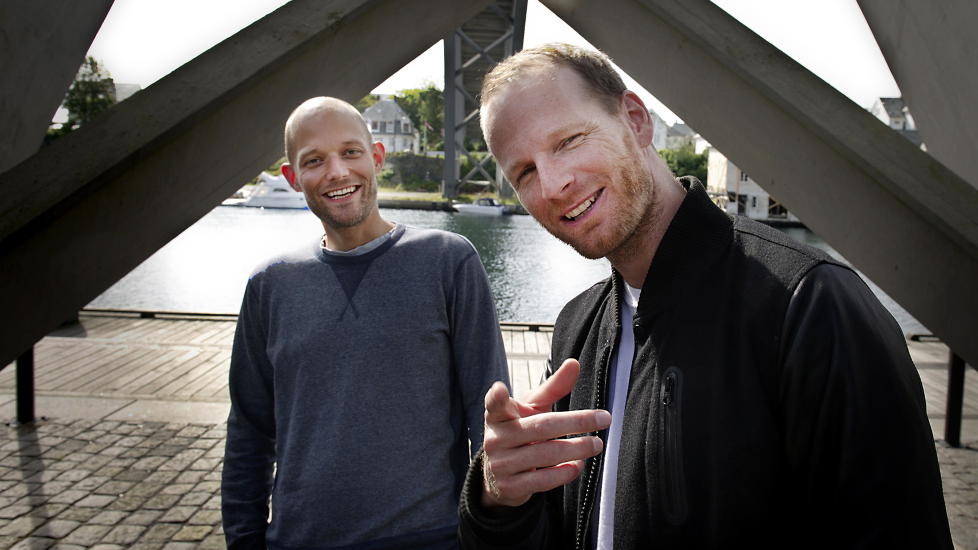 But not everyone is happy about the film shooting in their neighborhood, it seems. Not in Nyack, New York anyway:

In addition to the permit fees paid to the villages and the money earned by homeowners and merchants, local catering, trucking and staging businesses can benefit by helping film crews on location. But some residents and businesspeople say that the cultural cachet and glitz of star sightings come at a price — hordes of technicians, noisy film trucks and klieg lights.

“Some people may love the fact they can see Nyack in some films or series on TV or in the theaters,” Cris Spezial, the owner of Nyack Gourmet, wrote in an email. “But this is my home and the place I run my business.” He added: “The film crews come and go, but we have to live here all year long.”

Tension between residents and production crews is nothing new.

Obviously not that many Gabriel Byrne fans live in Nyack. wink 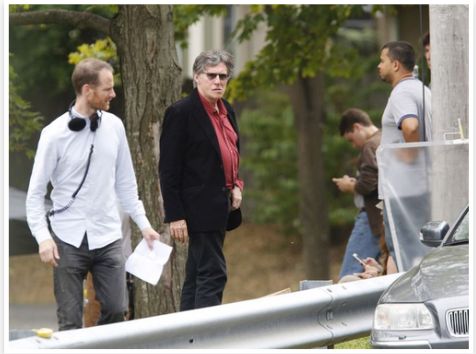 Cineuropa: Louder than Bombs takes off for the second time

MundoDVD: Louder Than Bombs (Joachim Trier, 2015), in Spanish, with pictures from the set (mostly Isabelle Huppert and Jesse Eisenberg)

Mr. Vogt is on a roll! As co-writer of the screenplay for the current film Louder Than Bombs, he has worked with Joachim Trier on their previous projects, Reprise and Oslo, August 31st. Now he has directed his first film, Blind, and already won two prestigious awards for it: the screenwriting award at the 2014 Sundance Film Festival and the Best European Film honor awarded by the European Cinemas Network at the Berlin International Film Festival.

Cineuropa: Why did it take you so long?
Eskil Vogt: It might look as if script-writing has taken up most of my time – in fact, I have also worked on my own projects to direct, but until Blind, financing had never fallen into place. While studying literature and history of ideas, I wrote numerous shorts and directed some as well; I went to film school as a director, and since then I have continued to combine the two.

When did you decide to become a filmmaker?
First and foremost I am a film lover. In junior high, it was dawning on me that you could also make films, but I was totally outside the industry, so it took me some time to find a way in.

How did you start working with Trier, and what makes you a good team?
We have known each other since we were 19 and met as camera assistants on a quiz show for Norwegian television, and we made our first short in 1995. I don’t really know why our collaboration works so well, except we have now done it for years. I write the scenes, I am closer to the words, but rather than complement each other I think we are both good at doing a lot of the same things, which saves us a lot of disagreements. 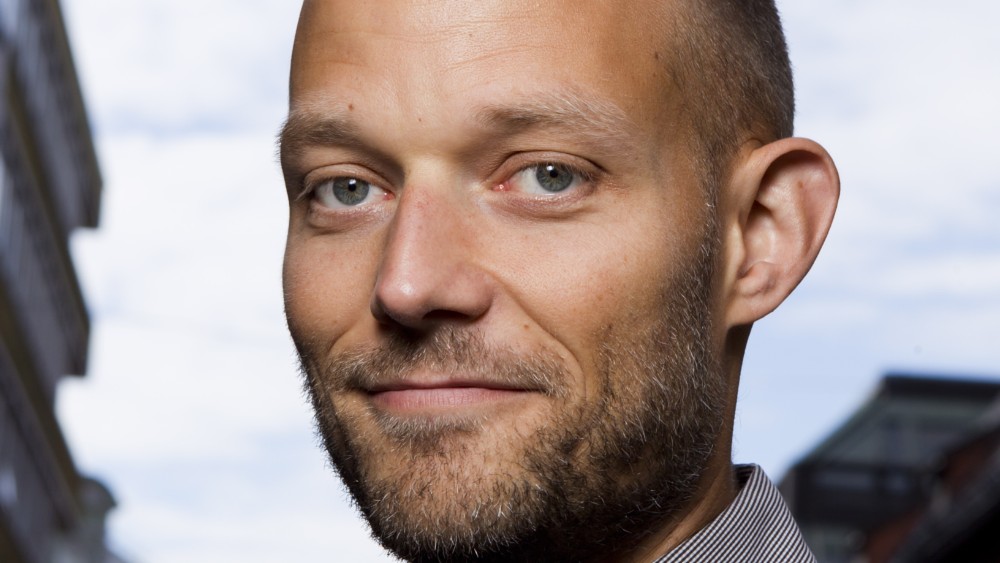 He is one of my very favorite actors. My first memory of Mr. Strathairn is from 1988. He was mesmerizing as the ex-hitman Borchek in The Equalizer episode Sea of Fire and he endearingly stumbled and bumbled his way along as a shy suitor in The Days and Nights of Molly Dodd. Then came Passion Fish, A Dangerous Woman (he played bad guy Getso, remember, and Gabriel played Mackey), and later Good Night and Good Luck, in which he absolutely nailed his character, Edward R. Murrow. Recently, he’s appeared in everything from Lincoln to Godzilla, with a stint on TV in Alphas.

And now, he will have a role in Louder Than Bombs, but we do not know anything about his character yet.

Interview at PopMatters, 2011 [This interview is no longer available at the PopMatters website]

“I’m always learning about the world I’m in and also the community of artists that are drawn to telling stories. It’s a very special community because of the kind of trust you have to have when you enter a room with strangers that you have to tell a story. And (you) put your hearts and minds together and commit to try to do the best you can. It’s inherently a collaborative effort. It’s also a lot of fun.”

Strathairn has been having fun since he began in 1979 working with independent filmmaker John Sayles, with whom he was to collaborate often.

Shifting between theater, film and later, television, he’s costarred such productions as “The Bourne Ultimatum,” “L.A. Confidential” and “Temple Grandin.” And while Strathairn has reached the status of a major “go-to” guy in Hollywood, it hasn’t been a smooth ride.

“Often I wonder, why am I still doing this?,” he shrugs. “Why don’t I just go back to my garden and chickens and dogs and family and just hunker down? But there are a lot of questions I haven’t answered, and being involved in this discipline keeps me answering them.” 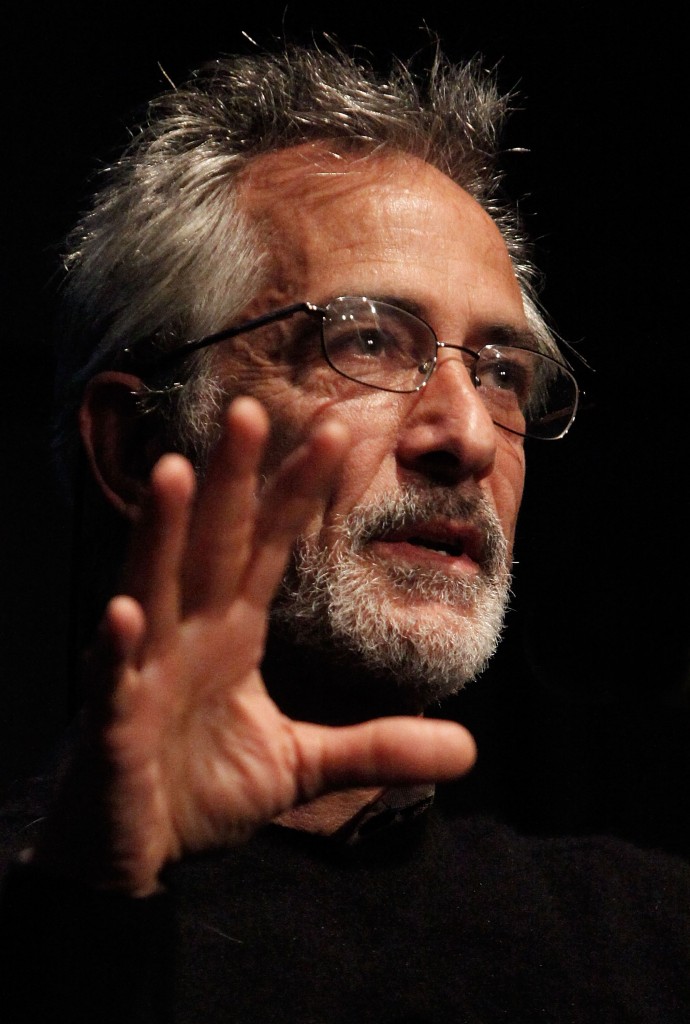 After a strong career in small film roles and television series, Ms. Ryan’s break-out film part was in the thriller Gone Baby Gone. She participated in three films with the late Philip Seymour Hoffman: Capote, Before the Devil Knows Your Dead, and Jack Goes Boating (his directorial debut). Her work in Win Win garnered her new acclaim and the film grabbed a 94% score at Rotten Tomatoes. She surprised people by appearing in the television comedy The Office. She famously stunned In Treatment fans with her portrayal of Adele, the analyst who called Paul out, returning his volleys, shot for shot.

And now she will be working with Gabriel again, in Louder Than Bombs.

No character name or information about her role is available, so we will wait patiently for more news. 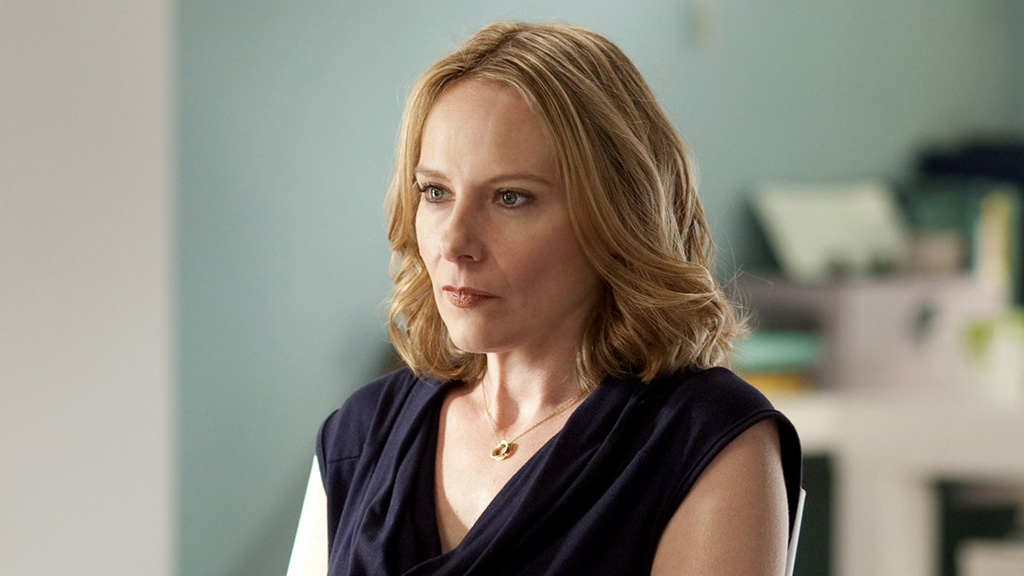 Mr. Druid (I know, I am so formal, but he should get used to being called Mr. because I think he has quite a career ahead of him!) is a new face to me. He has appeared in television series, most notably Louie, created by and starring Louis C. K., and the upcoming HBO mini-series Olive Kitteridge, which features Frances McDormand, Richard Jenkins, and Bill Murray. So he is getting some very good experience and learning all about his craft.

And now he will be appearing in Louder Than Bombs, as Conrad, the youngest son of Gene, Gabriel Byrne’s character.

Devin is active in social media: Facebook and Twitter. Here are my favorite Devin/Louder Than Bombs tweets:

Hanging out with 9 year old me on set of #LouderThanBombs ! pic.twitter.com/u9LH9Z9eF0

Congrats to the LOUDER THAN BOMBS crew who celebrated shooting their 100th 35mm roll last week in NYC. pic.twitter.com/RUEZBJQRLq 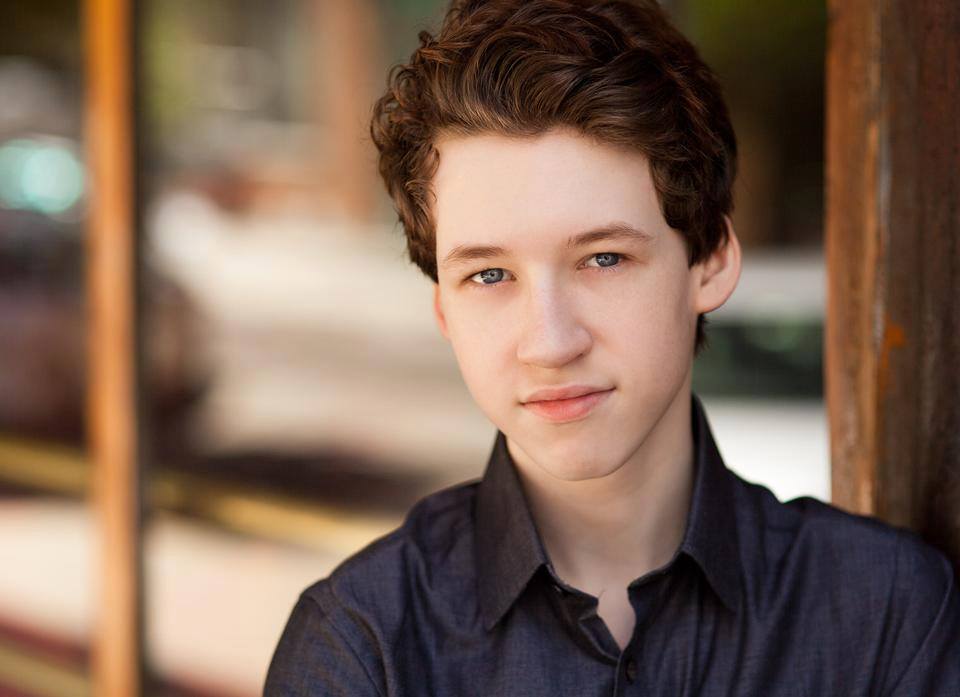 In addition to these three cast members, Deadline.com announced two more in September.

Ruby Jerins has landed a role in Louder Than Bombs for Norwegian filmmaker Joaquim Trier. It follows Gene (Gabriel Byrne) and his two sons (Jesse Eisenberg and Devin Makenzie Druid) three years after the death of their wife and mother. Jerins will play Melanie, a popular high school girl coveted by Druid’s character. She co-stars on Showtime’s Nurse Jackie, which just began production on its seventh and final season, and has appeared on Law & Order: SVU and As The World Turns and features Shutter Island and Remember Me. She is repped by ICM Partners, Jordan, Gill & Dornbaum Talent Agency, Principal LA and Bloom Hergott. 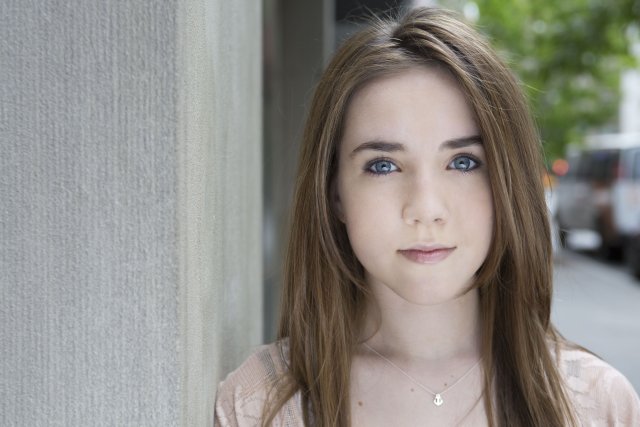 Rachel Brosnahan has been cast in family drama Louder Than Bombs, director Joachim Trier’s English-language debut. It follows Gene (Gabriel Byrne) and his two sons (Jesse Eisenberg and Devin Makenzie Druid) three years after the death of their wife and mother. Brosnahan plays an ex-girlfriend of Eisenberg’s character. She stars on WGN America’s Manhattan, and her TV credits also include House Of Cards, The Blacklist and Black Box. She next stars in the feature I’m Obsessed With You (But You’ve Got To Leave Me Alone). Brosnahan is repped by Innovative, Carole Dibo Talent Management and Schreck Rose. 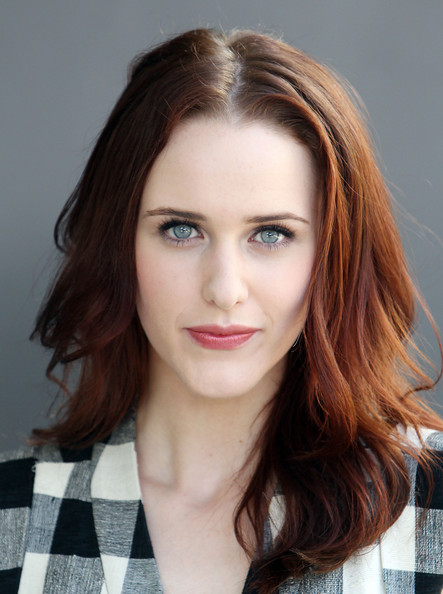 Finally, here is the latest synopsis for the film:

“Louder Than Bombs” centers around Gene (Byrne) and his two sons (Eisenberg and Druid), three years after the death of Gene’s wife (Huppert), an internationally celebrated photographer. As they return to the house all four lived in during the boys’ formative years, the three grapple with remarkably contrasting memories of this woman who influenced their lives so profoundly. In doing so, they must begin to negotiate how best to live together, and uncover the mystery that informed her life.

I made it to Ireland (England and Scotland, too!), in case you were wondering. And Ireland says hello: 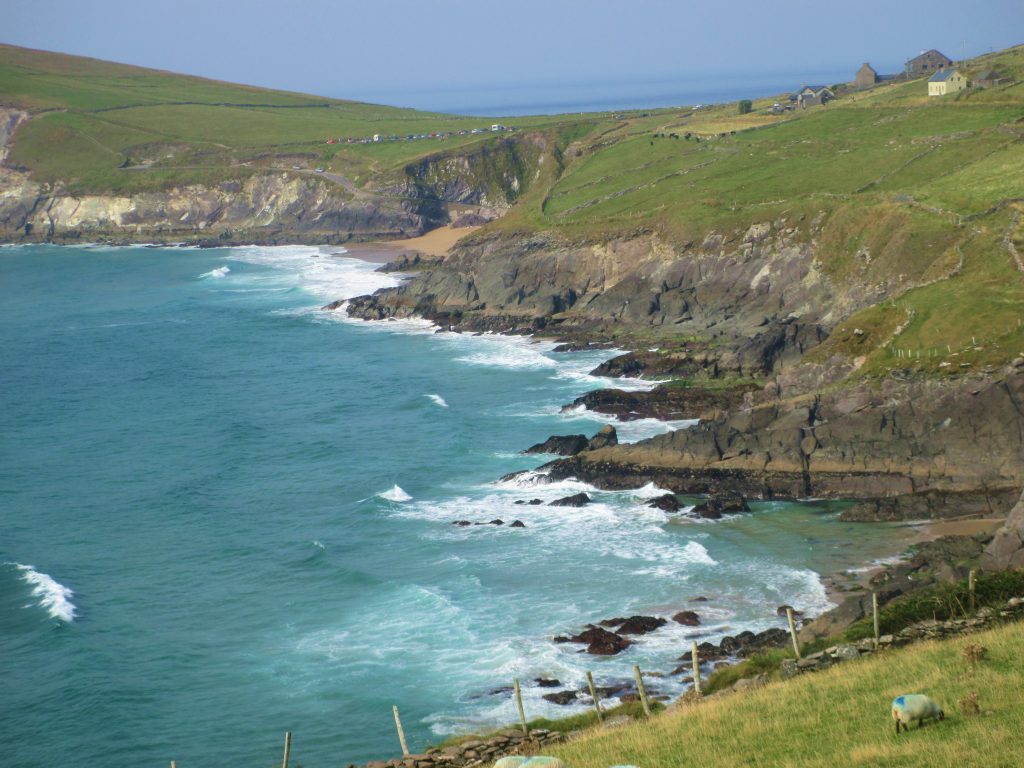