Christmas Eve brought a special present from Devin Druid, the young actor who plays Gabriel Byrne’s son in the new film Louder Than Bombs. A tweet with a single link. Uh oh, I thought. I imagine Devin’s Twitter account has been spammed and I will not click on this link. But something about the link beckoned me, so I took the risk and clicked!

Devin (@DevinDruid on Twitter) had very kindly sent me a link to an in-depth article about the making of Joachim Trier’s debut English feature, Louder Than Bombs. An exciting, engaging article, too, with pictures of the director and his cast and lots of intriguing text.

All in Norwegian! And now the article is behind a pay wall!

Wah! I was heart-broken. Then it was time to put out cookies for Santa Claus, so I allowed the evening’s activities to distract me from my disappointment. Later that night, I had a brilliant thought: ask Nora, my Byrneholic friend who lives in Norway, to translate the article–or just the parts related to Gabriel Byrne, because this is a long, very in-depth article and a complete translation would take days and days…

Below is Nora’s translation of the Gabriel bits. Many thanks to Nora for her wonderful help and to Devin for sharing the original link!

Headline in the Norwegian paper Dagens Næringsliv: America at my feet, with text by Nils Anker

It started with bathing boys in Bygdøy. Now the director Joachim Trier will make a debut with some of Hollywood’s big stars…

It is like a little invasion. This part of Manhattan is full of traffic and noise but this street is quiet. It is full of huge parked American cars. Making movies is a part of daily life in New York…Director Joachim Trier is now making his American debut…

A modest art gallery is the starting position of it all. Inside, the stoic Gabriel Byrne is sitting. The Irish character actor has been a part of Hollywood for almost 30 years, seen last in the highly prized series In Treatment. He is reading this weeks New York Magazine, and sometimes he is talking in a lively way with Isabelle Huppert…

Near the gallery in New York it is in the middle of the day. The sun is shining on the Hudson River. In a small office, Joachim Trier is filming dialogue between Gabriel Byrne and David Strathairn. The mood looks as shining as the sun outside…

Gabriel Byrne’s girlfriend is sitting in a big director’s chair . They live close by in Nolita . . .

The director had problems with the making of a scene.

I wanted Gabriel Byrne to act the scene in a light, almost humoristic, way but he brought in a lot of feelings and became melancholy and vulnerable. Take after take. It was something personal there, something private, a personal experience. I found it difficult. When the person that is responsible for cutting the film saw it, the reaction was very different. He said “That scene has become so much more touching.” We created something better than planned. The actor got space.

The evening is completed with a hug. In the gallery building, Gabriel Byrne is walking and waiting. He has had a very long day. Suit jacket, wine red shirt; a refined character, but mild and smiling.

Joachim sees everything. At the same time, he lets the actors be free. He is brilliant on the set, absolutely ruthless, but not offensive.

The two met in Dublin.

It is a deceptive story. It is an exceptional narrative with very complex characters. I never had any doubts that I wanted to be in this.

I hope that the actors have noticed that I am very connected to this story. Two things are important to me with movies: The possibility to be specific. This is huge. The other thing is beauty in pictures. Wind blowing through trees, faces, landscapes. I love that, I want that….. the mixture of beauty and expression.

Louder than Bombs is expected to have its premiere in September 2015. 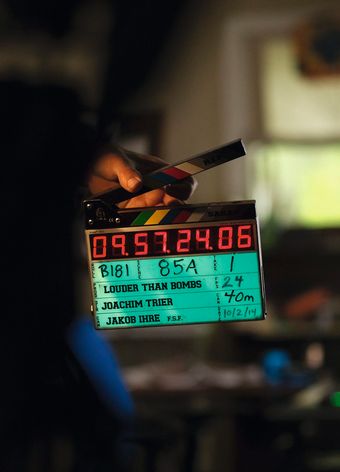