New Film: Louder Than Bombs – “One of the most anticipated art-house films of 2015”

It has taken time for this project to get off the ground, but now it is about to fly!

As previously reported here at Byrneholics and other sites, including Dark Horizons, director Joachim Trier’s English-language film debut was originally scheduled for last year. Funding issues (yes, art is about money, too…) caused a delay. But the greenlight has been lit now!

The Norwegian Film Institute has confirmed its €1.6 million (NOK 13.3 million) support of the project, and after French-German TV-network Arte’s cinema division joined as co-producer in February, the €7.5 million (NOK 62 million) is now secure.

The film is currently in development and production is scheduled to begin in New York City in September. So: no production stills, no poster, no interviews about the film yet. But there IS some excited buzz in the press and plenty of background here to get you prepared for what, I am sure, will be a remarkable movie. 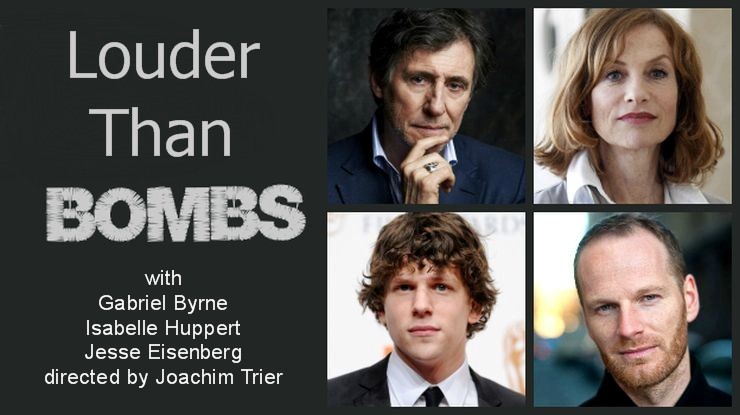 The cast will remain the same for the Trier and Eskil Vogt-scripted drama that will revolve around a late war photographer played by Huppert, whose husband and two sons discover a secret about her past as a retrospective of her work is being put together. Interestingly, the film has been described as having a “Rashomon”-style plot conceit. We’re big fans of Trier and can’t wait to see how it all comes together. “Louder Than Bombs” is set to shoot this fall.

The director of two widely celebrated, excellent films (Reprise and Oslo, August 31), Trier’s exciting cast, headlined by none other than the glorious Huppert (who may finally be in an English language role worthy of her talents) also stars the formidable Gabriel Byrne and Jesse Eisenberg, and is bound to be one of the most anticipated art house films of 2015.

Although a wealth of young talent has emerged in the past half-decade, there are few filmmakers whose work has moved me as strongly as that of Norwegian director Joachim Trier. His two films Reprise and Oslo, August 31st are not only two of my favorite films of their respective years, but two of my most beloved films ever. Trier’s work is poetic and haunting, visceral and honest, telling stories of friendship, illness, love, ambition, foolishness, and intellect that are both playful in style and striking in frankness. His films are melancholic and at times deeply saddening, yet always with a tinge of hope that penetrates through…

Starring Isabelle Huppert, Gabriel Byrne, and Jesse Eisenberg, Louder Than Bombs revolves around a famous, late war photographer (played by Huppert). The film will center around, “the eve of a retrospective of her work, some three years after her untimely death, [when] her husband and two sons discover an unsettling secret from her past” with Eisenberg  taking on the role of the son with Byrne as the father. Co-written with his long-time collaborator Eskil Vogt, the film will take place in Germany and the US. And speaking about Louder Than Bombs, Trier has said that it is, “a character-driven piece so I am obviously thrilled to have such incredible actors working with me on this…Isabelle, Jesse, and Gabriel are all actors I have wanted to work with for a long time, so having them play together as one family feels remarkable.”

The Film Stage (February 5, 2014): Joachim Trier Will Shoot ‘Louder Than Bombs’ With Jesse Eisenberg This Fall

With his newly-minted status as the next Lex Luthor, those fearing that Jesse Eisenberg will ditch his affection for independent features in favor of mainstream tentpoles can rest easy. While we imagine much of his year will be taken up by shooting Batman vs. Superman, we can add another film to his slate, one that’s actually highly-anticipated around these parts.

After financing fell apart late last summer, things are back on for the English-language debut from Joachim Trier, the Norwegian director behind the stellar Reprise and Oslo, August 31st. CineEuropa reports that a sincere thanks goes to Arte France Cinéma, who have come aboard to help finance Louder Than Bombs, which is co-scripted by Eskil Vogt (Blind, and frequent Trier collaborator), with a shoot expected to kick off this fall.

From the Ioncinema article:

Gist: The film kicks off with the preparations for an exhibition celebrating the amazing work of a famous war photographer, three years after her untimely death. Her husband and her two sons are reunited for the first time in years. A family secret then resurfaces, plunging their seemingly calm lives into chaos.
Release Date: Cannes, baby, all the way (well, we hope).

Are you working on a new film?

Yeah! I’ve finished a new script, it’s called Louder Than Bombs, and we’re hoping to shoot it this fall. It’s a U.S. project so if things work out as we’re hoping, we’ll be shooting somewhere north of New York, upstate or something, this fall. It’s a family drama and we’re trying to do something funny and as always a bit melancholic, bittersweet, dealing with the very subjective perception we all have of the same events in a family, as siblings and as parents. You know, how incredibly different we remember things. It’s telling the story of a family that’s going through a tough time, but it’s also a journey of how they learn to connect with each other.

Is Anders (star of his two previous films) going to be in it?

Anders is not going to be in it because he’s a doctor now, you know. He’s doing his internship and so he’s removing appendixes as we speak. 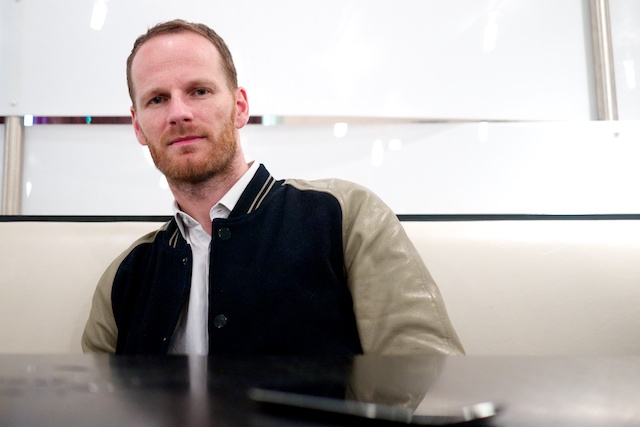 Festival de Cannes May 24, 2014 Interview – Joachim Trier: “I yearn to find something very personal and uniquely cinematic” [This article is no longer available at the Cannes website]

You’ve been to Cannes before, and talked with directors participating in the Short Films competition. This year, you’re a member of the Cinéfondation and Short Films Jury. What advice would you give a director who is starting out?

Sustain your curiosity and love for cinema and make sure you sleep when you shoot. For me, filmmaking started in the cinema seat, loving the big screen and loving movies. I think it’s a bad habit if you make movies but you stop watching them. It’s important to stay in touch with the language.

If films reflect their auteurs, do you yourself have fears about your creative work?

All the time. I fear repetition, being lost, not finding anything special to say… But it’s part of the process every time. The art is in the craft as well. It’s being there, with the actors, when you use the camera… Yet, hopefully, it transcends this too and becomes something emotional.

Joachim Trier at IMDB Note: there is no listing yet for Louder Than Bombs in his filmography; all information about this film is only available at IMDBPro and IMDBPro tells us the film is in development. wink 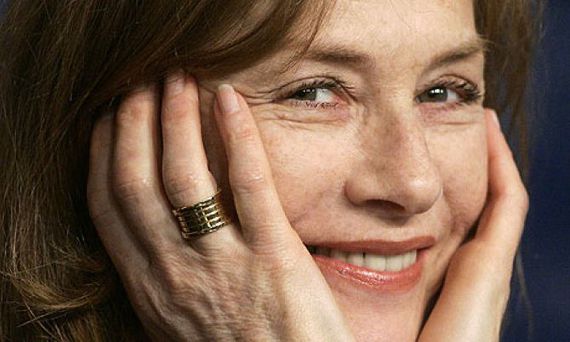 The Wall Street Journal Scene Asia (April 3, 2014): Isabelle Huppert: Living in the Present [This article is no longer available on the Internet]

Isabelle Huppert is one of the most prolific and versatile actresses in France, with more than 100 credits accrued in a career stretching 40-plus years. And yet, the 61-year-old star—whose portfolio spans from French art-house films to American television’s “Law & Order: Special Victims Unit”—refuses to look at her career in the rearview mirror.

Ms. Huppert was in Hong Kong last week—her first visit to the city since 1980—as a guest of honor at a dinner held by the Hong Kong International Film Festival, as well as to promote her latest film, “Abus de faiblesse” (“Abuse of Weakness”), in which she plays the lead role in an autobiographical story by French director-writer Catherine Breillat, who was manipulated by a con man after she suffered a stroke.

This summer, Ms. Huppert will appear in a stage production of “The Maids” at New York’s Lincoln Center, playing alongside Cate Blanchett. She will also shoot a new film, “Louder Than Bombs,” from Norwegian director Joachim Trier, in which she will star opposite Gabriel Byrne. 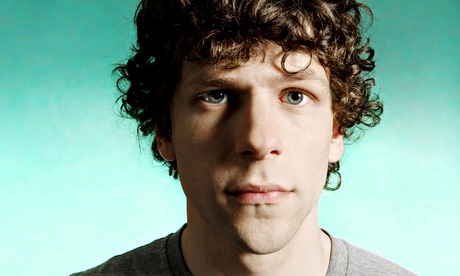 Although Ms. Huppert and Mr. Byrne are definitely still committed to their original roles in this new film, Mr. Eisenberg’s status is a bit unclear at this time. Casting calls that went out in July of this year headlined his name, however, so we remain hopeful that he will still participate.

There is an illuminating recent (March 2014) interview with him about his film The Double, at The Guardian:

The duality explored in The Double is surely meaty fodder for actors, who spend their working lives inhabiting other people, and who choose to present particular versions of themselves when they’re on the promo circuit. Having a public profile, says Eisenberg, is “similar to this movie, in the sense that any time you’re discussed without your consent or involvement it’s uncomfortable. And in this movie Simon has a physical manifestation that looks and dresses like him, and it’s mortifying because it makes him feel alienated from himself. That’s a similar experience to being in the public eye and having people perceive you in a way that you didn’t intend, or discuss you in a way that’s not in accordance with how you think about yourself.”

Eisenberg was subject to such scrutiny last year after after those Now You See Me interviews, although he says he doesn’t read his press: “There’s no good that can come out of it. The really nice things feel like lies and the really bad things feel like truths. Everybody, I think, feels that way.”

Does the curiosity to discover what the public are saying about you dissipate with time? “No, no, it doesn’t go away. It’s an odd experience; you want to be a fly on the wall after you leave a room, and if you’re doing something that’s public you have total access to that experience. The first movie I was in, I was 19 years old. When it came out and I Googled myself, or Alta Vista-ed myself, and someone said the meanest thing I’d ever heard anyone say about another human being. Just from the trailer of the movie. Which was a small arthousey movie, it was not even a kind of thing that would create a big response that would warrant a mean comment. But after that I never searched for myself again. Because people can be cruel. My dad teaches sociology, so he talks about group behaviour and groupthink and the way people coalesce around certain thought patterns. It makes sense that people would write mean things. That’s more understandable than gathering together to say nice things about other people.”

This new film is shaping up to be something very special indeed! Stay tuned for more details as they become available!