Now that the people have responded to Quirke via Twitter, it is time for the critics to have their say!

Read to the end for more on the sound issues plaguing the BBC, the Quirke title sequence, and future live-tweeting. Coverage of Quirke here at Byrneholics will continue as the next two episodes air, including an essay in the works by me. I cannot resist writing about this series and its themes, the author, and the star and supporting players. wink

reviews of Episode One: Christine Falls

From each smoke- stained saloon wall to the city’s dimly- lit, dark- grey cobblestones, 1950’s Dublin is evoked in a way that is compelling, aesthetically precise and true to Banville’s depiction of the city as in his Benjamin Black novels.

Playing a lead role that he was born to play, Byrne is at his smoldering, Bogart- best as Quirke, a pathologist whose half- brother, Malachy (Nick Dunning), a doctor in Dublin, he suspects of tampering with the death certificate of Christine Falls, which claims that she died of pulmonary embolism…

In fact, what makes Quirke chilling is how faithful the language and the era are portrayed: every long, black coat, every rimmed hat a nod to the era that it portrays.

Quirke doesn’t show its hand immediately, though, and impatient viewers may get restless in what is a multi- dimensional, slow- burning thriller.

That the central focus of Quirke is as much on characterization as it is on plot may frustrate viewers who demand that a plot be even and progressive, though viewers will be rewarded with what are top- notch performances from Gabriel Byrne, Nick Dunning and Michael Gambon in a thriller that is as much about the end of an era in Dublin life- the 60’s is only over the hill, after all- as it is a whodunit.

What sets Quirke apart is the way it slowly builds a collection of characters, taking care to develop its protagonist and the main players before bringing them inexorably together to reveal how the crime occurred. You could argue in numerous examples from Marlowe to Morse that the details of the scenario are incidental and that it’s the personality involved that brings you back page after page or week after week. Quirke goes one better by providing you with a set up where you think you know the answers before losing you in the flawed hero’s backstory and then hitting you with the resolution garnished with a bitter twist…

Some commentators regard Gabriel Byrne as a bit past it for the role, possibly as his young niece has a crush on him, but this is an unfair assessment. He’s supposed to be her uncle after all and perhaps we’re overaccustomed to seeing leading men under forty. The action shifts between Dublin and Boston USA, territory Byrne knows well from MILLER’S CROSSING (though he was on the flipside of the moral compass there) and he could do this sort of thing in his sleep. Understated but with the air of a man who’s seen his fair share of demons, he is perfect casting.

Quirke, BBC One: Dublin goes noir as Benjamin Black’s novels come to the screen, by Andy Plaice, The ArtsDesk, (May 25, 2014)

They’re calling it Dublin noir and, on first showing, there’s something very stylish about the BBC’s new three-part drama starring Gabriel Byrne. Pubs and cigarette smoke and long, smouldering looks help the cause. There’s plenty of rain too, and a lot of grey and blue in John Alexander’s film, broken up by flashes of colour and arresting, unusual camera angles.

Based on the books by John Banville (writing as Benjamin Black), Quirke boasts an impressive cast including Michael Gambon and Geraldine Somerville, with screenwriting duties shared by Andrew Davies, who penned this episode, and Conor McPherson. First outings need to hook us with a storyline but also make us want to spend time with the characters, and with Byrne in the title role there’s more than enough to hold our interest. His Quirke, a 1950s Irish pathologist, is a masterclass in less-is-more…

In seeking answers, Quirke not only wants justice for Christine but rattles an already complicated framework of relationships within his own family. The scenes with Gambon and Somerville – both outstanding – are pure gold.

But was it good television? Well, the story was based on Christine Falls, the first Black book, and one I enjoyed reading. I’m not sure how easy it would have been to follow for anyone who hadn’t read the book. The pace seemed rather uneven, with quite a lot of action near the end, when the scene shifted from Ireland to Boston in the US, after some rather sluggish and borderline dull periods. The quality of those involved in producing this show guaranteed that I paid attention, but I think I’ll reserve judgment on its success for another week.

Quirke, episode one, BBC One, review: ‘too long’: Gabriel Byrne’s performance in Quirke transfixes the attention, but it wasn’t enough to make up for the drama’s flaws, by Chris Harvey, The Telegraph (May 25, 2014)

Ten minutes into the first episode of Quirke (BBC One), the new pathologist detective drama adapted by Andrew Davies from John Banville’s novels under the pen name of Benjamin Black, I thought I was in some sozzled dream of Dublin in the Fifties. It was permanently dark, or raining, people were always drunk, or drinking, and I kept hearing people say the words of the episode’s title – “Christine Falls” – without any real sense of who or what they referred to.

Gabriel Byrne was on screen though, being Gabriel Byrne, being Quirke. Byrne’s presence almost guarantees Banville’s pathologist a quiet intensity and an air of life lived and love lost. Christine Falls, I gradually came to realise, was a pregnant woman, who had died and found her way onto Quirke’s post-mortem table. It had happened before the drama began. Quirke didn’t agree with the cause of death given, and he particularly didn’t like the fact that it had been given by his adoptive brother Malachy (Nick Dunning), who appeared to hate him. He wanted to know what had happened to the baby…

No review from The Times because it is behind a pay wall. sad

The BBC is “looking into” complaints about problems with the sound on its new crime drama Quirke – just weeks after hundreds of people complained about being unable to hear dialogue in Jamaica Inn.

A corporation spokesman said it had “received complaints from some viewers unhappy with the sound quality during Quirke”.

He said: “We appreciate that some viewers experienced problems with the sound when watching Quirke.

“A wide range of factors can influence audibility and we are looking into why this should be and whether there are any steps we can take to improve the experience for the audience for episode two.

“We will continue to work with others in the television industry on this important subject.”

Our title sequence concepts for BBC’s Quirke, by Richard Morrison with the Morrison Studio (April 25, 2013)

Yes, that date is correct. Just over a year ago, Mr. Morrison blogged about the work he and his colleagues were doing on the title visuals for Quirke. I grabbed the images and posted them, as I usually do, and then received word from him that the information was not actually ready for public consumption yet, so I removed them.

NOW they are available, so be sure to check out his posting to see how these striking images that lead us into the world of Quirke were developed. Brilliant work! 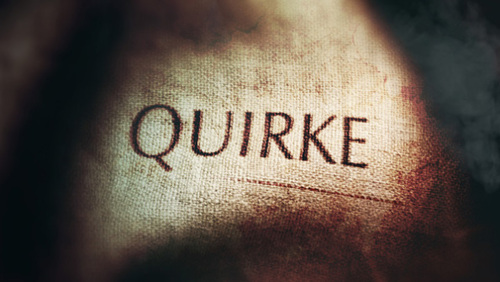 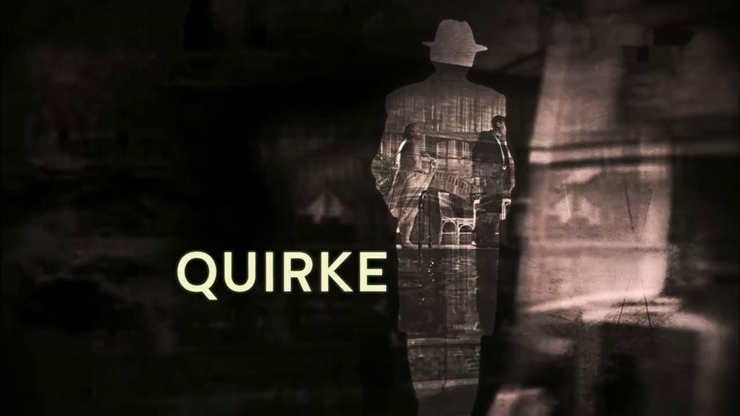 Karen, AKA @ByrneingCutie, will be tweeting her reactions to Episode Two: The Silver Swan, but not on Sunday when it airs. Please stay tuned for her “semi-live” tweet session as soon as she has a chance to watch it!