QUIRKE Premieres in the UK–Finally!

The videos and clips included in this BBC One website for Quirke will not work for you if you are not in the UK, but the text articles are, of course, available. Here’s a bit about Quirke himself:

Quirke is a loner and he’s often to be found propping up the bar in McGonagle’s, brooding over a solitary drink.

Quirke grew up in the harsh environment of Carricklea Industrial School for orphaned boys. He was rescued by Garret Griffin, a rising star in Dublin’s legal profession, who took Quirke in and raised him as his own son. Garret and his wife had another son, Malachy, but Garret’s favourite was always Quirke. Garrett lavished attention on Quirke as Quirke was growing up – attention that he did not give to Mal. As a result, Quirke’s relationship with his adoptive brother has always been difficult…

This is a great resource BBC One has created. I just wish we could all enjoy it…

Lots of coverage for Quirke in advance of its debut on BBC One in the UK Sunday (tomorrow!) night.

Gabriel Byrne, John Banville (AKA Benjamin Black), and Andrew Davies all have something to say about the troubled Irish pathologist who is “more at home among the dead than with the living.”

“Because of his work as a pathologist, I always feel Quirke is much more at home among the dead than with the living,” Gabriel says. “In a strange way, the dead are still living creatures and he’s the last person to take care of them, so that space where he works is very sacred to him. Quirke is an enigma and that is fascinating because it forces the audience to ask questions about the character. I like the idea of hiding in plain sight and allowing the audience to play that game with you.”

“When he started to write in his nom de plume Benjamin Black I was very curious to see how he would approach the detective genre,” says Byrne. “And of course being Banville, he does have the mystery there for sure, but what makes the books and the programme interesting is that it’s as much a study of character…”

Byrne and Banville first met in 1984 when the actor starred in a Channel 4 film, Reflections, based on the author’s novel The Newton Letter. And yet Byrne had practical reservations about playing Banville’s creation. “I joke with John about this, but Quirke was originally six-feet -four, had the feet of a dancer and blond hair,” says Byrne. “And John said, ‘It’s a curious thing… since you started to do this, I’ve started to darken Quirke’s hair and make him a little smaller.'” Banville himself adds: “Quirke started being enormously tall and blond and handsome and irresistible as a joke on myself because he’s the exact opposite physically from me. Gabriel’s a great catch for the role… I think he carries a sort of unshiftable melancholy.”

To research his character, Byrne shadowed some real Dublin pathologists. “We talked about the soul, and how you differentiate between the brain and the soul,” he says. “And I asked one guy ‘are all dead bodies the same?’ And he said, ‘No, they’re not… sometimes you’ll get a person in who had been unexpectedly killed or murdered or died in a car crash – and the energy is trapped in their body, and it takes a while for that energy to leave.’ So I said, ‘What do think about that?’ And he said, ‘On a practical note, never ever leave anybody angry… anger gets trapped in the body.”

Note from Stella: I believe the article title is referring to the fact that Quirke has already shown in Ireland, so this is it’s second showing. There is no word that a “second series” is being planned at this time.

RTÉ.TEN: Gabriel Byrne prefers anonymity [This article is no longer available at the RTÉ website]

“When I was doing In Treatment, it became a nightmare – much more than it had been before that.

“You have to be very careful with television. I love working but I don’t want that kind of attention again.”

The 64-year-old actor added that his new BBC One drama Quirke could be a one-off series.

The three-part serial is based on John Banville’s books, but Byrne revealed that he may not return for future adaptations.

He explained: “I don’t want to turn into one of those ‘detective guys’, you know. [A long run] would kill me altogether.”

“As a child Dublin seemed like a magical world. Even still, the smell of diesel fumes still brings me back there. But looking back I realise what a narrow world it was, how poverty-stricken it was. It was a beautiful city, dingy and ramshackle with a melancholy beauty – most of which is gone now.”

The hard-drinking, intolerant yet highly instinctive Quirke is a character Banville said had come from the “damaged recesses of my Irish soul. I sympathise with Quirke; he is a very damaged person, as many Irish people are from their upbringing.”

“I wish he had more of a sense of humour, but it’s quite hard to be humorous in crime fiction, I’m not sure why. My Spanish publisher said to me, I’m so in love with Quirke but couldn’t you lighten him up just a little bit. And Gabriel [Byrne] brings a lot of darkness to the character.”

Byrne explains of his alter ego: “I think most people can relate to a wounded past.

“Some people are more adept at dealing with it, and some people are much more delicate and sensitive and I think Quirke is one of those people who hides his vulnerability and his pain underneath an exterior of detachment.”

The series airs its first episode, Christine Falls, tomorrow (Sunday) night at 9:00 pm on BBC One.

And here is a treat for you: our own Karen, who is @ByrneingCutie on Twitter, will be live-tweeting this first episode! You can follow along with her on Twitter (hashtag #Quirke of course) and I will capture her tweet stream and publish it here as soon as I can get it all organized. Thanks to Karen for sharing her thoughts, observations, and reactions to the show with us!

Stay tuned for more reviews and information as the series progresses. Quirke is finally in the UK. Yay! 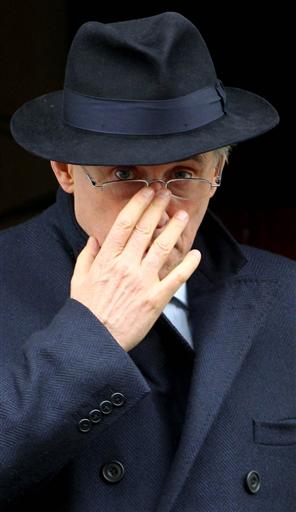 Quirke, the television series based on the books by Benjamin Black (nom de plume for literary legend John Banville), is at last appearing on screens in the UK, starting with the first episode, Christine Falls, on Sunday, May 25. Ireland got Quirke first, when the series was presented back in February on RTÉ. Now that the BBC is airing it, we can hope for an appearance on BBC America at some point in the near future!

And fear not, Game of Thrones fans! There is no GOT episode that night, so you can change gears and get involved in mystery and intrigue of an entirely different order.

Christine Falls, the first of the six Quirke books, lays the groundwork for the series by introducing us to Dr. Quirke, Dublin in the 1950’s, the people who inhabit Quirke’s world, and their secrets. This television episode sets up the remaining two episodes very well and prepares us for the progression to The Silver Swan and the grand finale, Elegy for April. With its emphasis on characters and settings (a dark and smoky Dublin), the Quirke series is not your ordinary whodunnit. Benjamin Black is interested in plot, but he is more interested in the world in which these characters are living and how it has touched, harmed, and in some cases, destroyed them.

Gabriel Byrne captures the character of Quirke perfectly. If you believe the press, then you can see why…but I think a good part is a good part. And Quirke is a GREAT role for any actor. 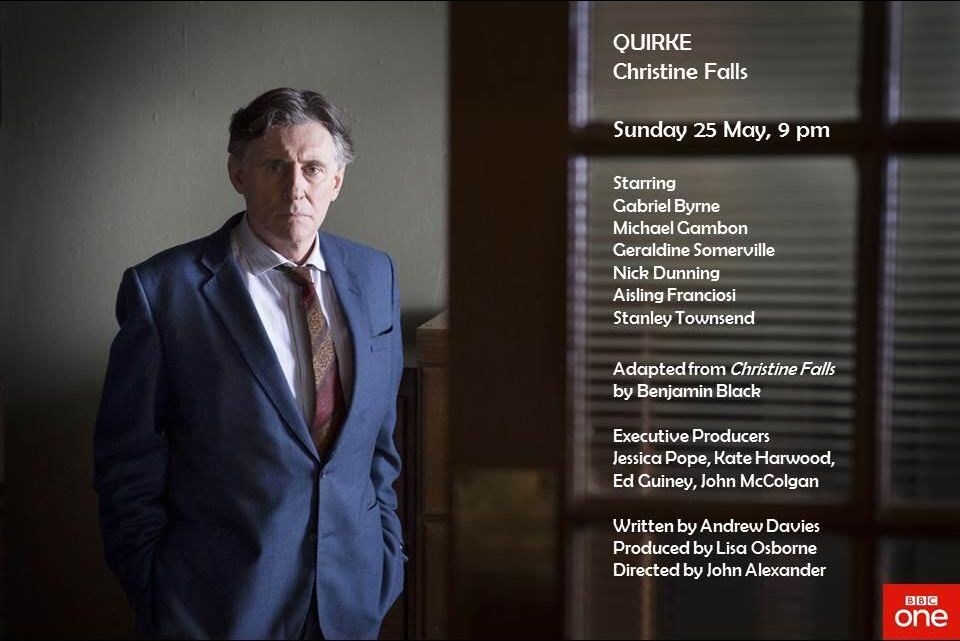 Gabriel Byrne interview at The Independent: “It was almost a Taliban-esque society’: Gabriel Byrne goes crashing into the past in ‘Quirke'”

The Quirke DVD is available for pre-order at Amazon.uk and will be released on July 30, 2014. 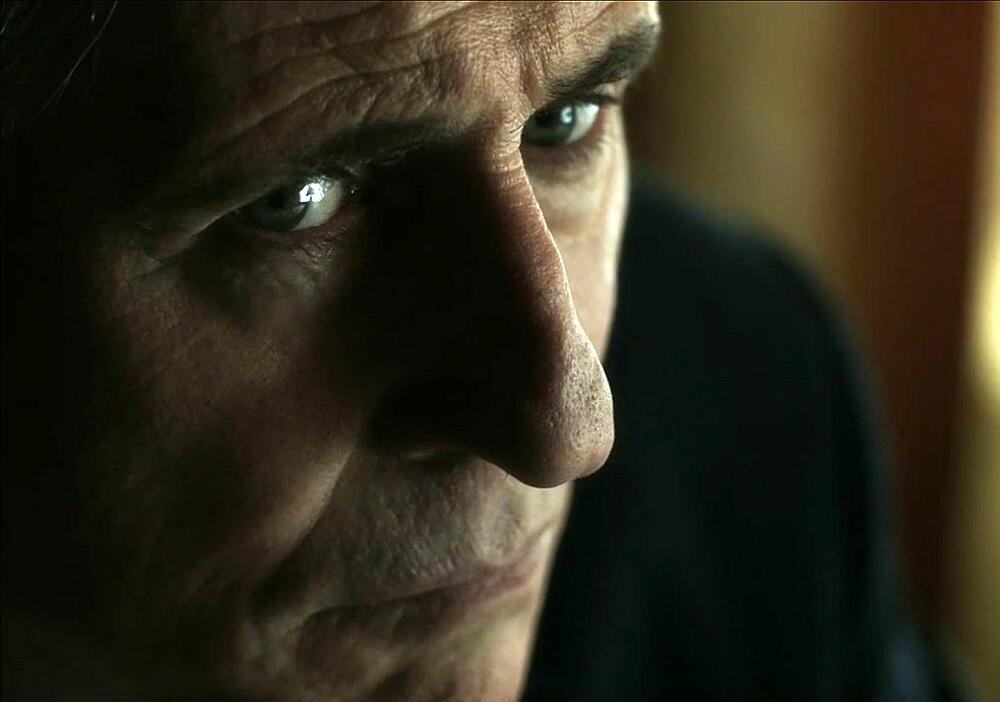