Take a bite out of the Vampire Academy Mega Movie Page immediately or enjoy the little prologue below before your feast!

Every now and then, Gabriel Byrne likes to surprise us. And he did just that when he took on the role of Victor Dashkov in Vampire Academy, based on the popular young-adult book series by Richelle Mead.

To be honest, I never expected to see Mr. Byrne play a vampire of any kind. Oh, he has done his share of genre films, to be sure, and some of them are our favorite films. But a vampire? Not really. He toyed with the idea as Lord Byron in Gothic, of course, but a fully-fledged, toothy, blood-sucking creature of the night? No.

So, all you Byrneholics out there who have yearned for a Count Gabriel? Here he is! smile

Vampire Academy did not receive very good reviews. In fact, the film received some of the lowest scores of Mr. Byrne’s long career at both Rotten Tomatoes and Metacritic. These were the professional critics’ scores, however. Those folks trashed the film with all the wit and venom they usually save for over-weaning directors and very tired film sequels. If you take a peek at the User Reviews, though, you will see a different story. Some fans of the book series were more than ecstatic about the film, while others thought it was fun and entertaining, even if it did not really live up to their expectations.

I read the first book. I saw the film. I enjoyed both, remembering that they are aimed at a young adult audience and also admitting that I relished both as a “guilty pleasure.” Based on the book, I thought Gabriel Byrne would be perfect as Victor Dashkov: a Prince who has fallen to the dreaded Sandovski’s Syndrome, made old and weak before his time, and forced to eye the Throne from a depressing distance; a sympathetic character who also carries ulterior motives in his pockets and a spry step despite his ailment; the Moroi King Wannabe who just cannot be as sweet and avuncular as he wants us to believe.

And you know what? I was right! Mr. Byrne, despite the critical thumping he took for playing Victor, is the perfect Victor! 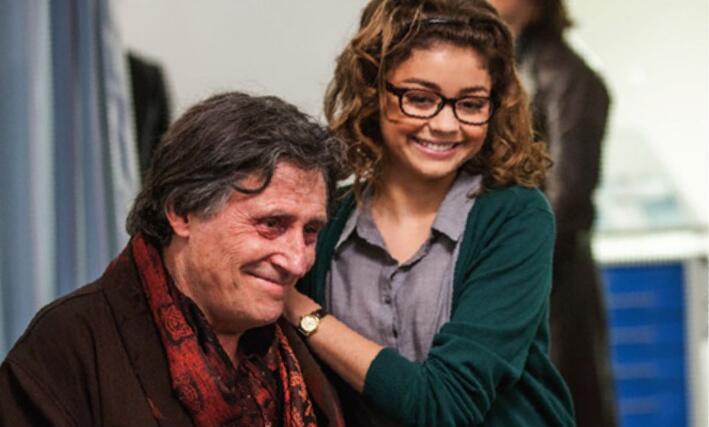 Behind the scenes with Sarah Hyland, who plays his daughter Natalie in the film

There is lots of humor in Richelle Mead’s writing and there was abundant humor in the film. Mr. Byrne has some very funny and, pardon the pun, biting lines, and he also has an opportunity to play two roles he has never really essayed before: the kindly old uncle and the James Bond Villain, complete with bodyguards and attack dogs. I can see why he chose to make the film (above and beyond the theorizing that his paycheck will pay for a posh getaway on the Riviera). It was a nice challenge. He played the good guy AND the bad guy, all in one film.

But in addition to this little bonus, Mr. Byrne must have astutely observed that the entire story of Vampire Academy (the first book and the film) hinges on his character’s actions and motivations. Without Victor, there is no plot. Oh, there are plot-like elements swirling around, but nothing substantive. Without Victor, the story cannot move forward and reveal to us what is really going on. So, yes. Victor is the key element in the story and one of the few adults in the story. Victor makes his nefarious way through the hyperactive teenage craziness that is a high school for vampires, eventually finding out what he wants to know. He even manages to wrap his hands around it.

For a time, anyway. wink

So, my advice to you, fellow Byrneholic, is to give this film a try. Think of it as Gabriel Byrne’s romp on the dark side–he seems to have a lot of fun with it and so will you!

Or, if you’d rather skip the film, the Vampire Academy Mega Movie Page chases down tons of promotional images, screencaps, and videos, some really rotten reviews, soundtrack and DVD details, and other yummy information for your delight and serves them up to you without a whimper.

Come visit the dark side. We have Gabriel Byrne.