Louder Than Bombs made some noise at the 2015 Toronto International Film Festival. No, not the big bang kind of noise of some of the “hotter” films like The Martian. Noise more like the steady humming sound of people talking excitedly and enthusiastically with friends about a great film they have just seen, a film that touched them deeply, an experience that they need to share. You know that feeling, yes? Louder Than Bombs creates that feeling–more at Toronto than Cannes, apparently!

Below you will find “The Toronto Reaction”: reviews, an interview, some new promotional materials, and a boatload of Tweets about the film. But first up: a mini-trailer

There were, of course, lots of reviews coming out of Toronto during this year’s festival. Louder Than Bombs received some negative reviews (one of the most nonsensical being an over-heated analysis that begins: “If there has been a single trend in all of the films I’ve seen so far at TIFF it is that of the one focusing on depressed white people…”), but most on-the-spot reports and official reviews praised the film. A sampling:

Wired: 6 Movies from the Toronto Film Fest that’ll be a big deal

Like Sorrentino, Norwegian auteur Joachim Trier made his English-speaking debut at TIFF with his latest film, Louder than Bombs. Thankfully, the heart and intellect of Trier remains intact in the transition. The power of his work (see: Oslo, August 31st and Reprise) isn’t lost in translation. Propelled by the death of wife and mother Isabelle Reed (Isabelle Huppert), every sequence in the film is a reaction to this loss in the family. Lyrical and hypnotic, Trier allows his movie to unfurl like a fractured memory, toggling back and forth from the past to the present. It’s an intensely personal piece of cinema—one that brims with nuance, originality, and feeling. Without being mired in undeserved sentimentality, Louder than Bombs captures the irreconcilable sadness of losing someone you love.

Writer and filmmaker Chandler Levack’s festival diary is fun to read! Here is her entry about Louder Than Bombs:

Friday, 8 PM to 10 PM: Louder Than Bombs is a super subtle, beautifully realized drama about a family ripped apart by their mother’s death. It’s a funny, raw and honest English-language debut by an acclaimed Norwegian director. And it’s about the secret inner world everyone wrestles with, the pains of individuality and how families can hurt and help each other feel less alone. Gabriel Byrne plays a dad; with Jesse Eisenberg and newcomer Devin Druid (great name) as his two sons who are all coping with the sudden death of their famous war photographer mother, played by the great French actress Isabelle Huppert. Her need to work was an act of abandonment and all three characters retreat into their own secret worlds to cope with their loss. Trier makes an interesting choice to blur the line between the past and present, as memories and present day drama begin to collide. Trier really understands human behaviour and there are countless stunning scenes and character revelations and shots to commend this film on. (While it was playing, I kept thinking, there are easily a dozen spectacular short films in this one film alone, such as the scene where Byrne’s character stalks his son or the incredible opening sequence featuring Jesse Eisenberg at the hospital talking to his ex-girlfriend with his daughter just born.) The performances are true and the pains are acute. This is drama that is honestly concerned with people and loves its characters. You should see this film. 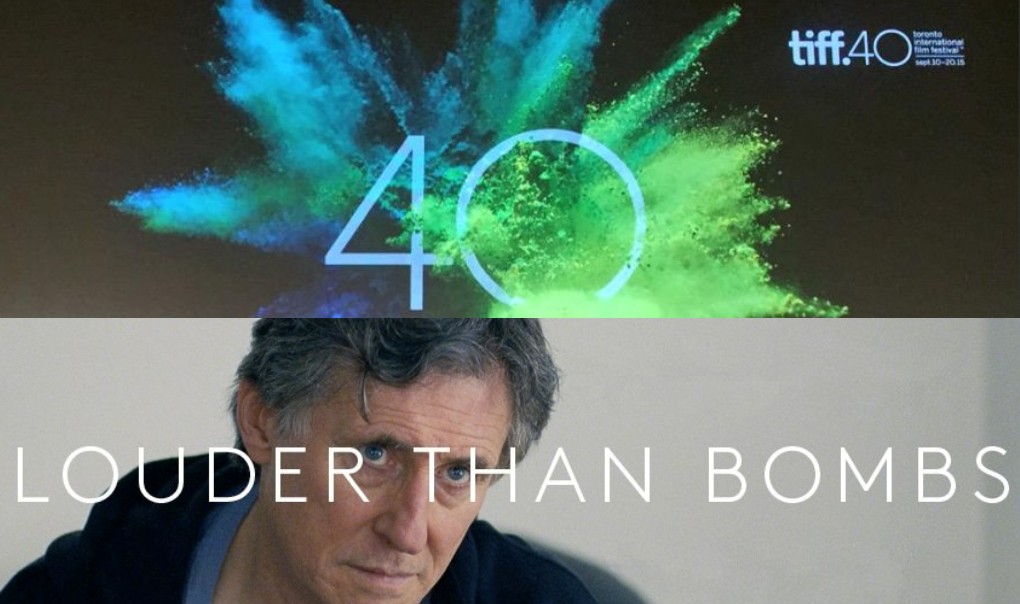 Shifting away from conventionality, “Louder than Bombs” serves as the narrative antithesis of “Stonewall.” Where Emmerich’s bloated mess has an episodic structure, Joachim Trier’s latest film is strung together by a singular consciousness—a mind rapidly spinning with ideas.

Everything that unfurls in “Louder than Bombs” is triggered by the death of photojournalist Isabelle Reed (Isabelle Huppert), mother to Jonah (Jesse Eisenberg) and Conrad (Devin Druid), and wife to Gene (Gabriel Byrne). The movie finds each character uniquely reconciling with this devastating loss: Jonah has married a woman he isn’t in love with. Conrad is trying to find romance in a high school classmate of his, but can’t do much more than immerse himself in PC gaming. Even Gene, when not spying on Conrad, is looking for intimacy again. He finds it in Conrad’s teacher, played by Amy Ryan. Naturally, this clandestine affair doesn’t stay hidden forever, which only widens the emotional gap between Conrad and his father.

Interspersed with vignettes, Trier’s English-speaking follow-up to “Oslo, August 31” oscillates back and forth from coherency to incoherence. And yet even the elements that stray away from the movie’s A-B structure don’t feel like unnecessary detours; they’re thoughtful tangents. At the film’s apex it plays like a filmed version of Isabelle’s memoir, as constructed by the disjointed memories of the people who loved her most.

The Toronto International Film Festival, which concludes Sunday, sets the stage for the fall movie and awards season. We asked our three reporters who covered the festival for their three take-aways from the influential event.

Mark Olsen: A Second Look. The festival in Toronto allows a look ahead to movies coming out in the months ahead but is also a chance to catch up with movies from earlier in the year. Yorgos Lanthimos’ romantic allegory, “The Lobster,” and Joachim Trier’s drama of family and grief, “Louder Than Bombs,” both English-language debuts from acclaimed international filmmakers, received decidedly mixed responses out of Cannes. I found both films quite emotional and moving, and easily among the best things I saw at TIFF. It was a healthy reminder that reactions out of film festivals are often unreliable and far from definitive. (And I am well aware of the irony there.)

Only director Joachim Trier made it to the North American premiere of his film (I think Jesse Eisenberg attended the festival but he seemed to be elsewhere). Trier did a stand-up Q&A for a packed theater afterwards and later a nice interview for IndieWire. 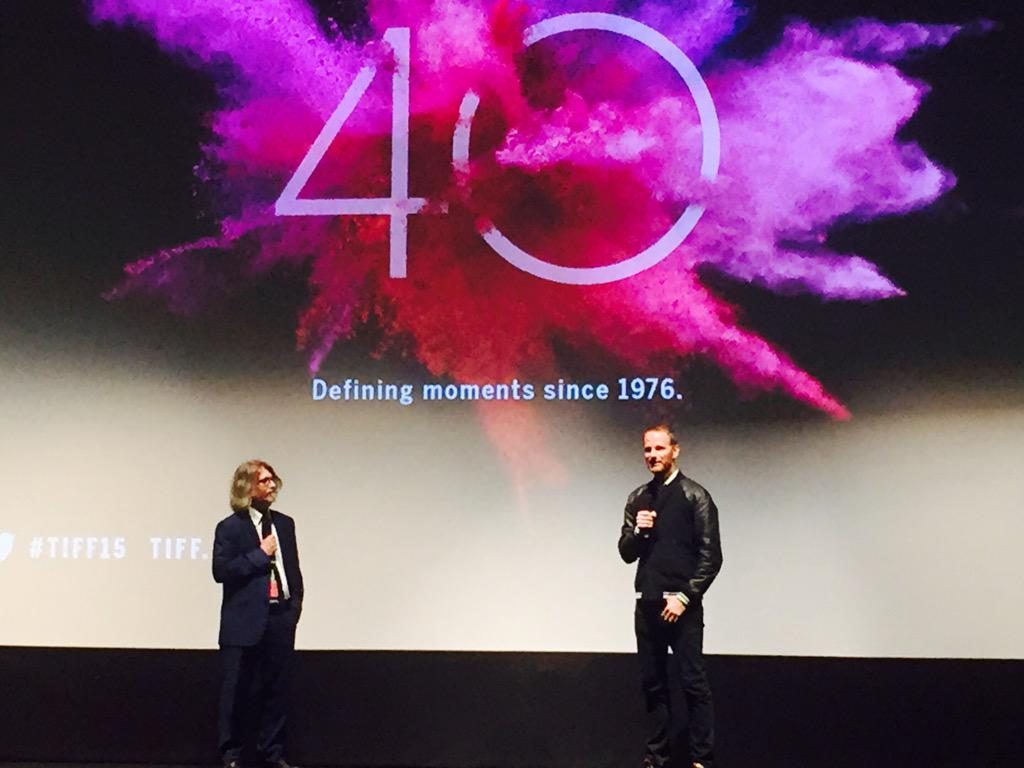 Indiewire at Toronto: Why Louder Than Bombs Filmmaker Joachim Trier Hates Labeling His Work and You Should, Too

There’s a lot of that sort of thing in film, shifting perceptions that really open it up, especially when it comes to Conrad and his father. Is that something that was in the script very early on?

It was, that exact thing, kind of starting a diversion, opening it up to different versions as you understand more of what each character has experienced. That was part of the premise for this one. Conrad says at some point during that sequence — which is almost like a diary, a manifesto that his brother reads — he says that his mother taught him how, if you change the framing of an image, you change the whole meaning. And I guess that’s a metaphor for the whole film, how the film opens up more and more.

A new “critical acclaim” poster popped up, courtesy of Louder Than Bombs on Facebook: 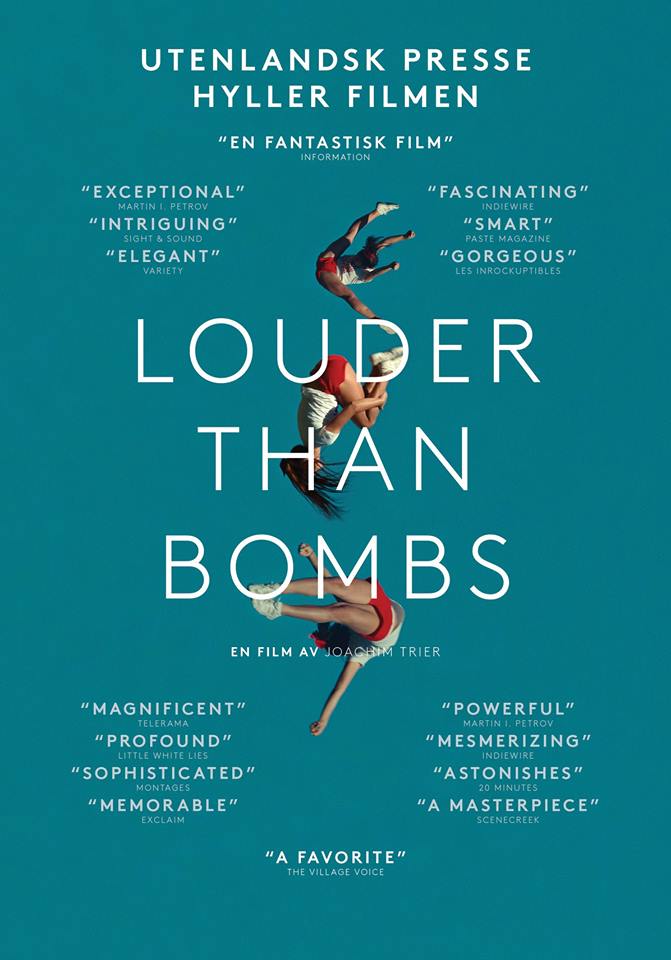 Every day during the festival, people were tweeting their reactions to Louder Than Bombs. By the end, most people were simply noting that the film made their Top 5 or Top 10 List.

There were lots of tweets. Here are some of my favorites:

Louder Than Bombs: outstanding. Masterfully constructed, stunning story about parenthood and loss. My favourite screenplay of #TIFF15 so far

Louder than bombs was a beautiful, delicate, complicated portrayal of a modern family dealing with loss and I absolutely adored it. #TIFF15 — Rob Bril (@rbril) September 16, 2015

LOUDER THAN BOMBS devastated me. This is how you do a multi-perspective family drama. Sprawling epic. More later. #TIFF15 — Bram B (@ReelBramz) September 19, 2015

LOUDER THAN BOMBS:Well-acted, ambitious, visual flourishes 👌 but limp, without a pulse. Spreads itself thin – a crammed mini-series. #TIFF15

LOUDER THAN BOMBS: Simply too many perspectives. But bless Trier for assembling the Huppert/Byrne/Ryan trifecta. A casting miracle. #TIFF15 — Marko Orlic (@marko_orlic) September 19, 2015

Louder Than Bombs has its premiere in Norway on October 2. It is screening at festivals in Helsinki and Vancouver currently. As soon as a US release date is announced, you will see it here!