So who IS Keyser Söze? We think we know now. But it does not matter. We still watch The Usual Suspects, even when it shows up at 3:00 am on some strange cable channel, don’t we? And why? Because we cannot believe we did not see that ending coming from a mile away. But we did not. Well, perhaps you did. But I sure didn’t!

It is August 2015 and The Usual Suspects is twenty years old. A cult classic, a geeky delight, a nerd’s battlefield for contentious argument–this film has stood the test of time, the intense dissection by film fans and script-writing hopefuls, and the endless spoiling of its plot on Twitter. Somehow, it remains as fresh and perversely twisted as it did on its opening day. 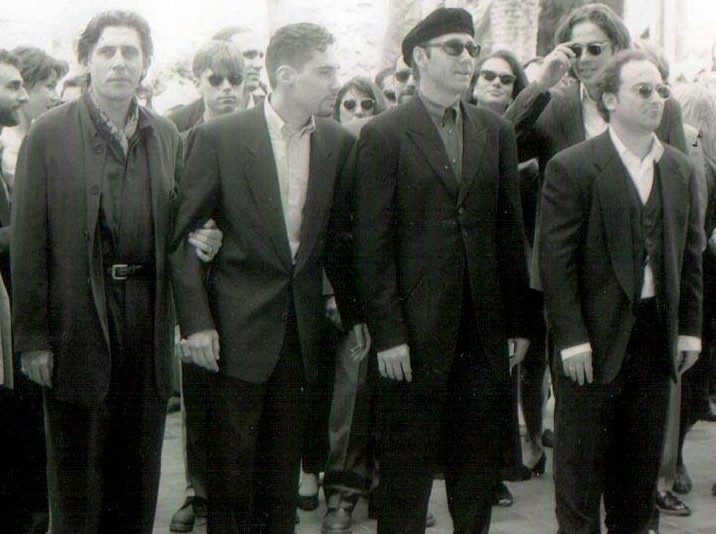 The Usual Suspects at Cannes in 1995

Here, in articles offering homage to writer Christopher McQuarrie, director Bryan Singer, and the cast of the most famous line-up in film history, are some reasons why: 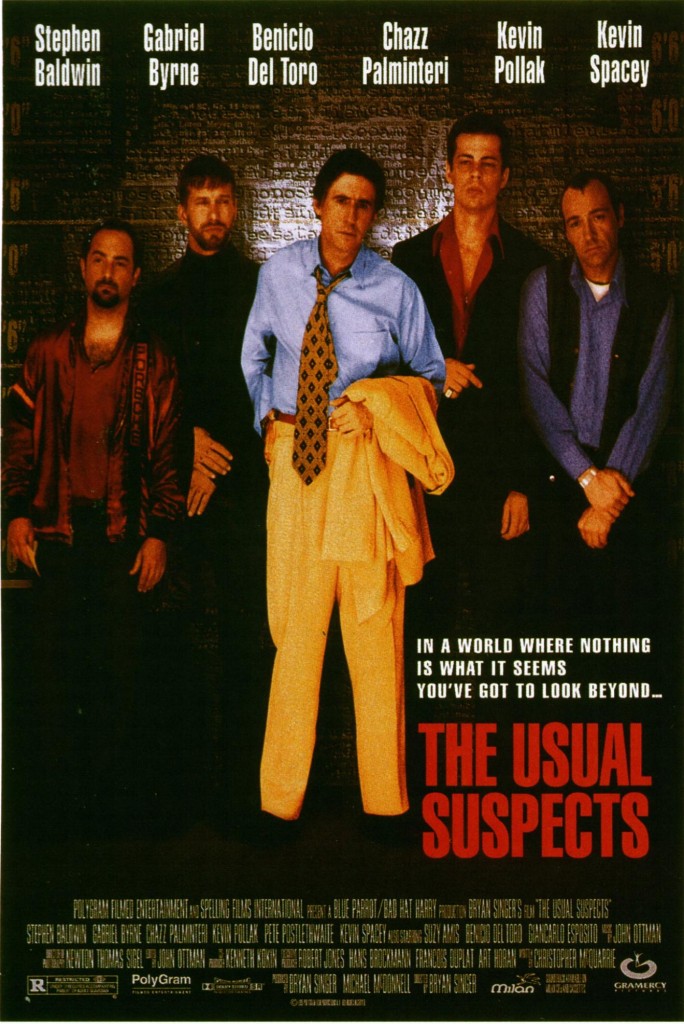 The Usual Suspects: A modern masterpiece that flips you for real

The premise is beautifully simple: Five notorious felons meet in a police line-up and plan a heist. It goes fatally wrong and the cops manage to reprimand the weakest of the group to question him about what went down. Upon that skeleton plot is piled layers of intrigue, deceit, menace and subterfuge to create a neo-noir classic. The Usual Suspects came out twenty years ago this week, yet it continues to hover just below the public consciousness as an achingly cool modern masterpiece.

The Usual Suspects, 20 Years Later: Everything You Never Knew

2. It was a poster before it was a script.

Following the success of 1993’s Public Access, Singer’s previous collaboration with writer Christopher McQuarrie, a reporter asked McQuarrie to describe his next project. McQuarrie’s response: “I guess it’s about a bunch of criminals who meet in a police lineup.” Singer and McQuarrie had agreed on this visual idea early on, and Singer’s question of what would draw these five shady characters together helped McQuarrie flesh out the script that would eventually become The Usual Suspects.

Ah, the 90s. Rollerblades. Bill Clinton. A time when moguls like Harvey Weinstein jetted out to Sundance and handed out fat distribution/production deals to filmmakers who were  barely able to legally buy beer. One of these lucky young tyros was Bryan Singer, whose 1988 short, Lion’s Den, led to a feature that went to Sundance, and that led to The Usual Suspects, which led to everyone losing their mind in 1995. Check out this behind the scenes documentary on that classic crime film, and see how story and filmmaking can trump budget.

This documentary on the film’s production is a great look into how this classic modern Noir came about. Enjoy!

Be sure to read the entire No Film School article for more videos and behind-the-scenes information for The Usual Suspects!

Bryan Singer remembers The Usual Suspects on its 20th anniversary

EW: The whole movie is, essentially, an act of sleight of hand. Was it difficult for you and Spacey to thread that needle and make the twist obvious only in retrospect?

Bryan Singer: I woke up and I had a thought and told John [John Ottman, the films’ editor AND the composer of the score for the film], “We thought we’d finish this cut early but we’re not. We need to go back into the movie and find every scrap of footage, alternate takes, creepy shots, interesting intriguing shots, to convince the audience that Gabriel Byrne is the baddie. Outtakes, bloopers, audio tracks, whatever. And we have to make the audience feel and truly believe that they’re getting a climax with Gabriel Byrne. They can’t just hear it in dialogue, they have to see it narratively.”

I had a premonition this might be necessary on the set so I actually had Gabriel Byrne stand in a trenchcoat with a pistol and fire it down at the very spot in which he was sitting and Gabriel was like “Why are you asking me to do this when it’s not in the script?” I just felt that I’d need it – some image of him as Keyser Söze. But Gabriel’s not a big gun fan and he was like “But Bryan why do we need it?” And finally I was just like “Look Gabriel, I’m a big Miller’s Crossing fan so I just think it’ll be cool!”