They may not have rolled out a red carpet for Gabriel Byrne at the Maine International Film Festival in Waterville, Maine, but they certainly rolled his films!

While visiting July 14 – 15 to receive the festival’s Mid Life Achievement Award, Mr. Byrne was further honored by having four of his films (with four of his iconic performances) screened. Miller’s Crossing, Jindabyne, and Louder Than Bombs all played on the big screen, followed on awards night by The Usual Suspects. It was a Gabriel Byrne mini-festival and he seems to have had a great time talking about his movies, meeting fans, and receiving a unique statuette. Check out the reports below and enjoy the event pictures shared on Twitter and Instagram!

Actor Gabriel Byrne was presented the Mid-Life Achievement Award on Friday night as the final weekend of the 10-day 19th annual Maine International Film Festival in Waterville got underway.

Byrne, 66, whose movie “The Usual Suspects” was shown before the award presentation, received the traditional moose statuette, created by Winslow artist Laurel McLeod. The awards, which McLeod has been making since 2001, are custom-crafted for the winners. Director Robert Benton, who got a Lifetime Achievement Award on Sunday, also received a moose statuette.

The moose’s head is made of papier-mache and the other parts are made of odds and ends.

Film festival program director Ken Eisen said earlier this week that Byrne “makes it seem so effortless, and I think that’s true of a lot of the great actors in history.” 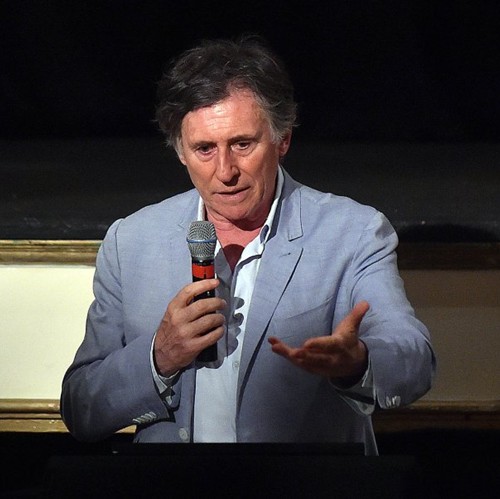 Amy Calder’s lovely interview with Gabriel at Central Maine.com [this interview is behind a paywall now]

Byrne said it is nice to be recognized and acknowledged for his work.

“I never thought I’d end up in America, making films; so for me, it’s a lovely honor to receive,” he said.

Being recognized by MIFF is especially touching for Byrne, who is a champion for independent film. Byrne said it makes him happy, coming to MIFF and helping in some small way to help shine a light on independent film.

“For me, small film festivals and film festivals that have integrity are important because they bring people together and they provoke ideas and they’re struggling, usually,” he said.

[This article has a survey that precedes it and a pesky ad that blocks text on a phone screen, so I am quoting it in its entirety–this is not my usual practice, as you probably know by now. –Stella]

Despite the 80 degree temperature and cloudless sky, nearly 800 filmgoers were at the Waterville Opera House on Friday for a screening of “The Usual Suspects” and the presentation of the Midlife Achievement Award to Gabriel Byrne at the Maine International Film Festival.

It may seem strange to some to spend such a perfect summer day in a darkened theater, but Gabriel Byrne, himself, put it best in an interview before the screening.

“To me, there’s nothing quite like a group of strangers sitting in a dark room together in a public place, watching something that is a communal, emotional experience,” Byrne said. “That’s a different thing than sitting at home and watching it on TV. There’s something about the group consciousness, watching something, that’s irreplaceable.”

In his career, Byrne has taken on roles in an array of genres — all but comedy, in fact — from dirty cops, gangsters and pirates, to priests and even the devil himself. When it comes to selecting projects, Byrne said he’s drawn to themes that fascinate him and hopes to provoke thought among the audience. Those screened at MIFF, “Louder Than Bombs,” “Jindabyne,” “Miller’s Crossing” and “The Usual Suspects,” all enliven viewers in different ways, whether it’s a complex family drama that challenges what it means to be “masculine” in our society or a crime film with a classic twist. 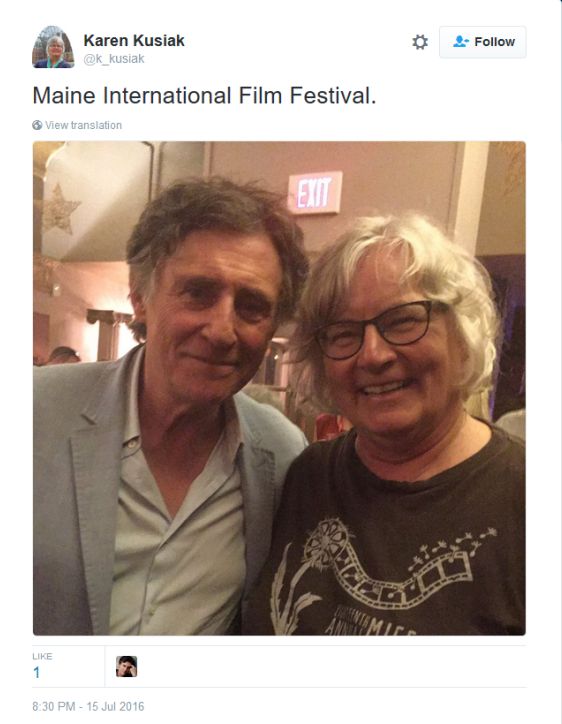 The Irish-born actor, who feels at ease in Maine because of the geographic resemblance to his home, took the opportunity to reinforce the importance of film festivals in small communities, such as Waterville, to thrive and grow.

“[I]t’s not just the work of one person; it has to involve a community,” he said. “And if you look at places where movie festivals have taken off and you study them, what brought people to Telluride, Sundance, Toronto, Edinburgh? What is it there that drew people to those places? … The community has to become involved, and they have to see it as something that generates not just cultural interest, but it generates an awful lot of economic business, too.”

Film festivals also have a way of opening the doors for independent or foreign cinema within the community, and in a world where mainstream cinema is married with commercialism, it’s a breath of fresh air. Byrne is an advocate for critically examining these types of blockbuster movies and even goes so far as to encourage audiences to question the motivations behind the making of them.

“Culture, particularly film and television … people think it’s just a story. It’s just entertainment,” he said. “They don’t have to actually think too much about it … but that’s the danger of it. The danger is you absorb that stuff unconsciously and it becomes a point of view. It becomes the way you see the world.”

For example, Byrne noted that most often all conflict in mainstream cinema is solved through violence. And, just as there’s product placement, there’s also idea placement, and many studio-driven movies become, essentially, propaganda. It’s the reason Byrne believes students should be taught critical thinking from a young age, because it is so crucial later in life to ask the important questions.

“If you have an unthinking people, you have a people who can be controlled,” Byrne said. “It becomes easier to make them fearful, and steer them down the wrong path.” 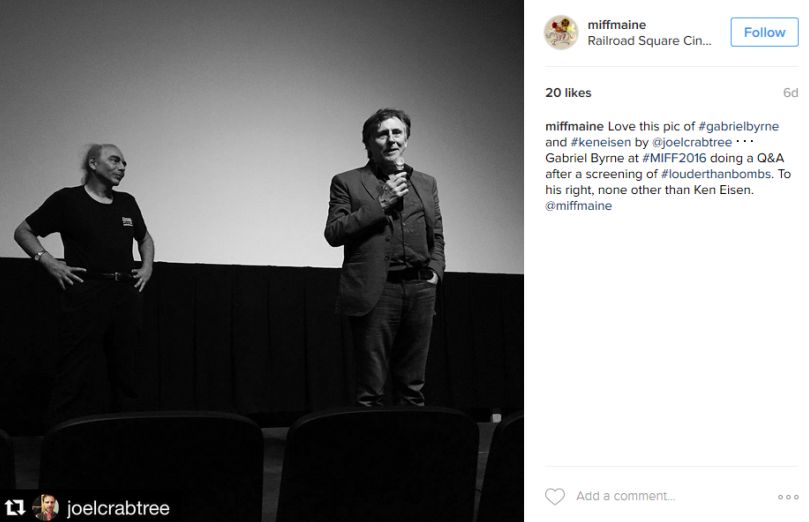 A report on the attendance and response at the festival [this article is behind a paywall as of August 30, 2020]

Attendance, praise for programming strong at this year’s MIFF

About 10,000 people attended the festival, which is put on by the Maine Film Center and included about 100 films, panel discussions with filmmakers, art installations and recognition for special guests Robert Benton and Gabriel Byrne…

The festival also bestowed its Mid-Life Achievement Award on actor Gabriel Byrne, whose films “The Usual Suspects,” “Louder Than Bombs” and “Miller’s Crossing” all were screened during the festival.

This was the first year the festival honored two recipients with awards. “We’ve never done more than one per year, so it was very unique for us in that way,” said the festival’s programming director, Ken Eisen. “We were truly lucky to have them both.”

“It was such a thrill to see Gabriel Byrne,” said Susan Watts, of Waterville, a festival volunteer who said the chance to see three of Byrne’s films was among her favorite parts of the festival.

“I love the chance to see the filmmakers,” she said. “Often times they’re filmmakers that you might not know beforehand, but you get to see their films and talk to them afterwards.” 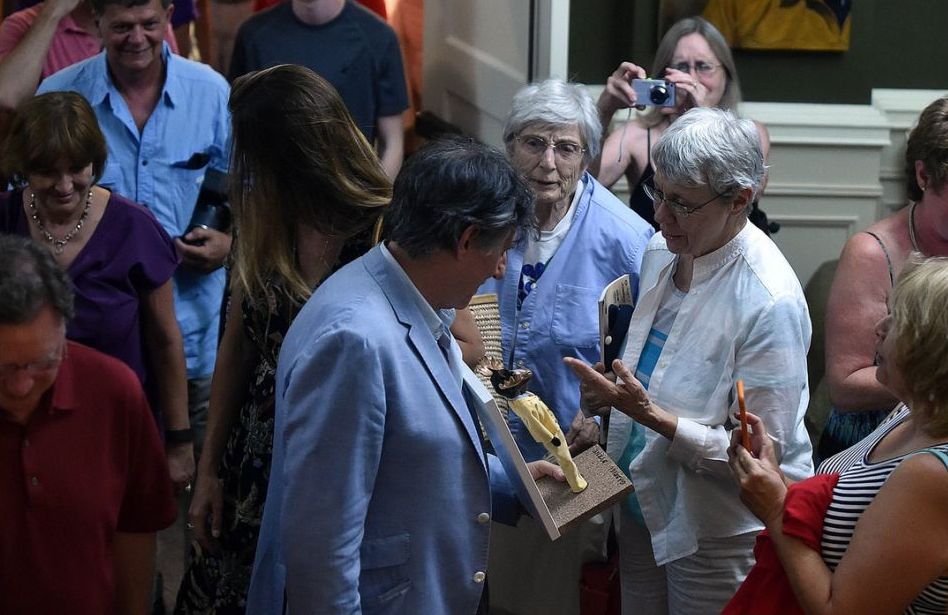 Also from Central Maine.com, a review of The Usual Suspects:

“Usual Suspects” is a game of chess, a masterpiece full of fake clues, twists and turns that flows from light to shadow and back again. “The Usual Suspects,” as most filmmakers know, rests somewhere near the top of the list of the greatest film noir thriller-capers of all time. There are many reasons for this, and they’re all there on the credit crawl at the end.

Then there’s the cast, one of the best. Except for the well-known star, Gabriel Byrne, who plays the crooked ex-cop and financial hustler Dean Keaton, there’s the great mix of then-not-so-well-known professionals: Kevin Pollak, Stephen Baldwin, Kevin Spacey and Benicio del Toro. Hire the best, you get the best movie… 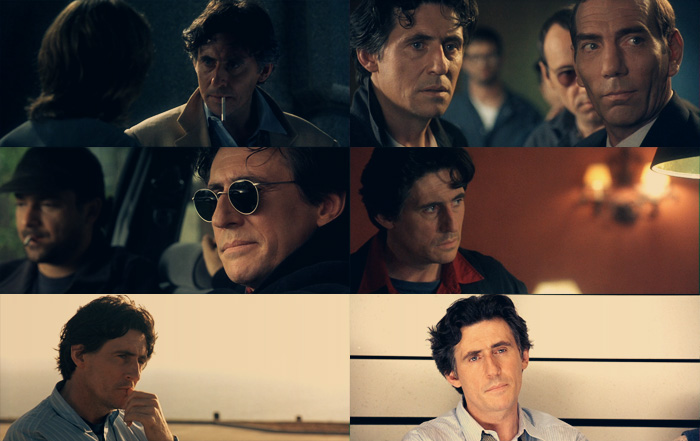 I always think of “crisis” when I see the words “mid life,” so it was a thrill to see Mr. Byrne being acknowledged by the Maine International Film Festival for the work he has accomplished thus far in his career. The message seems to be: Great Work and Keep At It! We agree, do we not!? Congratulations to our favorite Irishman on this lovely recognition.