Our Byrneholic on the Ground at Toronto, writer Kristen Skeet, shares her review of Gabriel Byrne’s latest film. Thank you, Karen, you lucky dog, I mean, you wonderful person! –Stellla heart

I got out of bed at 4:30AM on Saturday morning to make the drive up to Toronto to see the 9AM showing of Carrie Pilby at the Toronto International Film Festival. I am not what you would call a morning person, but I’m so glad I made the trip. I was in the audience for the second-ever public showing of the film, and Carrie Pilby did not disappoint.

I arrived to the Bloor Theatre around 8:30AM and was surprised to find a line from the theatre door wrapped halfway down the block. It was pouring rain, so the line resembled a fleet of umbrellas bobbing in a river. I made my way to the end of the umbrellas, using my sweater as protection from the rain, because I hadn’t bothered to check the weather report. The volunteers were so nice. They kept us updated every few minutes as to when the doors would open, and the doors opened right when they said they would.

Carrie Pilby is a somewhat serious coming of age drama cleverly disguised as a comedy, and it’s based on the novel of the same name by Caren Lissner. Bel Powley as Carrie is a delight. She is a charming actress with impeccable comedic timing. In the hands of another actress, the character of Carrie Pilby could have easily come across as annoying, and, admittedly, there were moments when I wanted to reach up through the screen and put my finger to her lips. “Shhh! Let the cute boys talk!” But, of course, that is all part of Carrie’s charm, and evidence that no matter who you are there are people out there who will love you because of it, not just despite it. When you’re Carrie Pilby those people are Jason Ritter, William Moseley, Nathan Lane and Gabriel Byrne. Not too shabby.

Carrie is a genius. She’s has an IQ of 185 and is already a graduate of Harvard at age nineteen. Because of this, she finds the world to be a vapid, over-sexed place and she wants nothing to do with it. Nathan Lane is Carrie’s psychologist, Dr. Petrov, a friend of her father, Daniel Pilby (Gabriel Byrne), who is desperate to help Carrie step out of her self-imposed solitary confinement and move beyond the death of her mother years before, and what Carrie sees as her London-based father’s abandonment of her.

Or maybe Carrie’s solitary confinement has more to do with her disastrous affair with her skeevy English Lit professor (Colin O’Donough) when she was only sixteen years old. The filmmakers unravel Carrie’s back story brilliantly, giving us just enough information about Carrie’s past to keep us centered in her present, and understand why she is the way she is. Vanessa Bayer and Desmin Borges have small but hilarious turns as Carrie’s oversexed and quirky, respectively, coworkers at her night job proofreading legal documents, a job her father found for her and all but forced her to take.

Gabriel Byrne recently said in an interview that he might enjoy being in a comedy. His movies have been overwhelmingly serious, for the most part, and he’s been labeled as a “brooding” man for much of his career. But what others see as brooding, and perhaps even cranky, is simply a man’s dedication to his craft. From what I’ve seen, Gabriel Byrne is a funny man. I’ve seen him laugh with fans and crack jokes. Have you seen End of Days? He played Satan and he made me giggle. Carrie Pilby is the perfect platform for Gabriel to showcase his comedic chops. He isn’t on screen long but he makes the most of it when he is. His final scene in the film, a quintessentially British confrontation with the aforementioned skeevy professor, had me and the rest of the film-goers in the theatre in stitches.

There isn’t a hint of Gabriel’s native Dublin accent here. His first appearance in the movie is a conversation with Carrie through the telephone. If I hadn’t known that Gabriel played Bel’s father, I wouldn’t have known it was his voice. Bel and Gabriel are quite believable as father and daughter. Bel is someone who can match Gabriel’s intelligence, and they both have those expressive blue eyes.

It should be noted that Carrie Pilby is a film with a female lead (Powley), based on a novel by a female author (Lissner), written by a female screenwriter (Karen Holden), directed (Susan Johnson) and produced (Susan Johnson, Alison Bossert, Susan Kartsonis, Suzanne McNeil) by women. Well done, ladies! 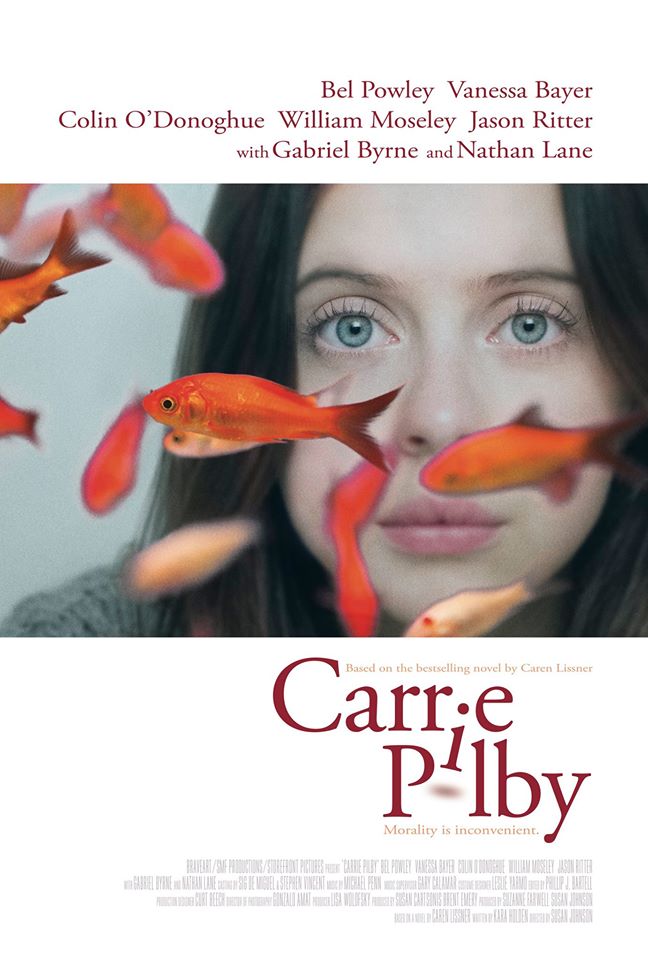 Be sure to check out Kristen’s brand new Blog!