According to Gabriel Byrne, “The past is the past. How many times do you sit around looking at old photographs of yourself? The past is intangible and irretrievable as is the future.”

And oh, how I agree with him, after spending the past two weeks going through boxes and boxes of family photos and clippings! Who are these people? Is that my mother staring back at me, in a candid shot so faded with age I can barely make her out? There’s my younger brother, one minute a tiny boy with a lop-sided smile, the next a strapping rugby player. How can that be the same person? And there I am, at age 4, recovering from a tonsillectomy. Is that really me?

In the interviews gathered here, Mr. Byrne talks about time and what it does to and for us. He also talks about Louder Than Bombs, his latest film. And politics. And life. And The Brady Bunch.

He inspires and enlightens, and occasionally he mystifies us. It is always a good thing, to listen to Gabriel Byrne. 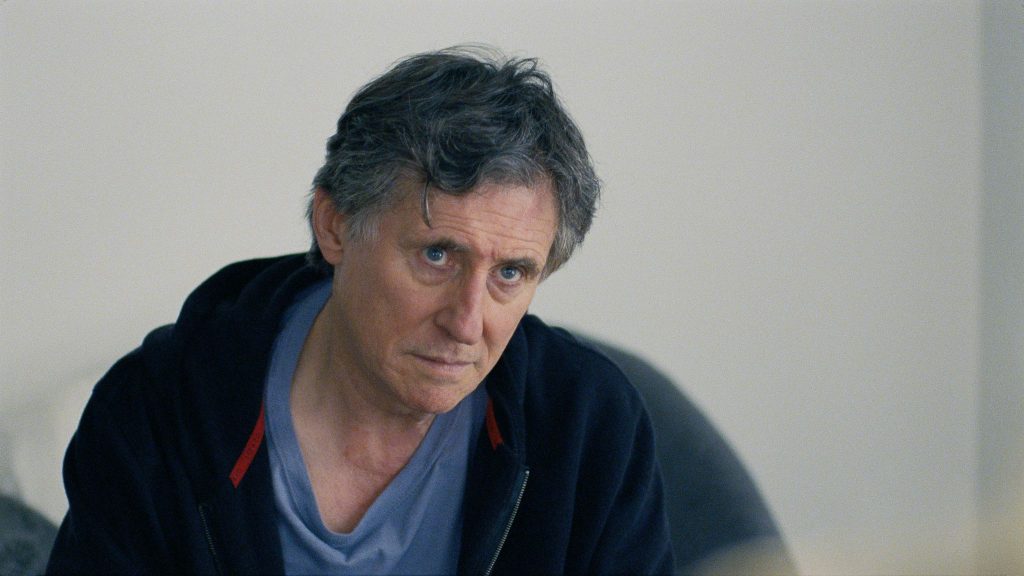 James Mottram/Belfast Telegraph: Gabriel Byrne: Acting is really all about being yourself

These days, he tends to work when he feels the need. His latest film, Louder Than Bombs is by Joachim Trier, the Norwegian director behind Reprise (2006) and Oslo, August 31st (2011).

I had no idea I was going to work with him, but I realised from those films that he was a unique voice. A movie is the product of choices rejected and I understood all the possibilities that he had at his disposal. What he ended up with was a very singular vision.”

Louder Than Bombs, Trier’s first English-language drama, is the tale of a well-meaning father (Byrne) and his fractious relationship with his two sons (Jesse Eisenberg and Devin Druid), who are trying to cope with the loss of their mother (Isabelle Huppert) after a car accident.

It’s a tender, tortured performance from Byrne, who has two children of his own, John ‘Jack’ Daniel and Romy Marion, now both in their mid-twenties, from his marriage to actress Ellen Barkin.

It’s why he loves the way the film [ends].

“It doesn’t end with an orchestra playing and everybody having a big group hug and an easy answer to life’s complexities. Life goes on and there’s no real reward for heroism, and the character I play is a hero because he gives out these little acts of kindness every day. I think being a parent trying to do the right thing is a very courageous journey.” 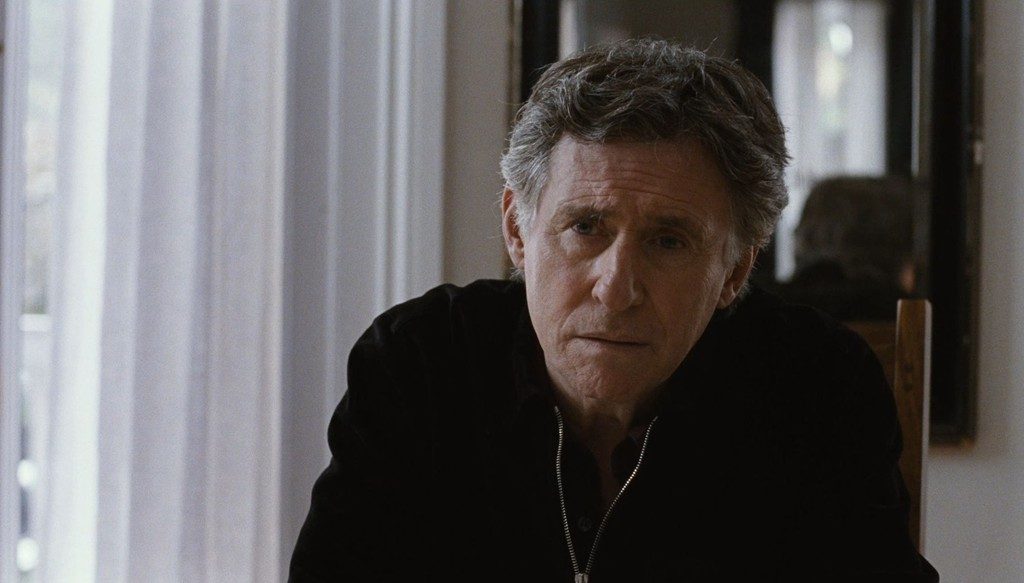 I will continue to add interviews here as they are published!

Gabriel Byrne is discussing the business of being an Irish actor abroad during the 1980s. He’s got plenty to say.

“There was a notion in British casting circles that you had to become a RADA-type actor,” he says. “The era of Albert Finney and Alan Bates had passed. There was nearly an anti-working class thing. There was definitely a prejudice against the Irish actor. If they had a choice to choose an English or an Irish actor they’d choose the English one.”

The phrase “good talker” can mean several things. Sometimes, we are merely suggesting that the subject won’t shut up. Gabriel Byrne, who overcame those early prejudices to become a rare Irish movie star, is something else together. He crafts sentences into disciplined paragraphs that nest within one another to form long elegant arguments. He was a teacher in the 1970s. He would have made a great lecturer…

This week, domestic viewers can see him in Joachim Trier’s fascinating, frustrating Louder than Bombs. Byrne is superb as a widowed father who finds himself separated from his son by the old confusions and by newer obsessions with technology… 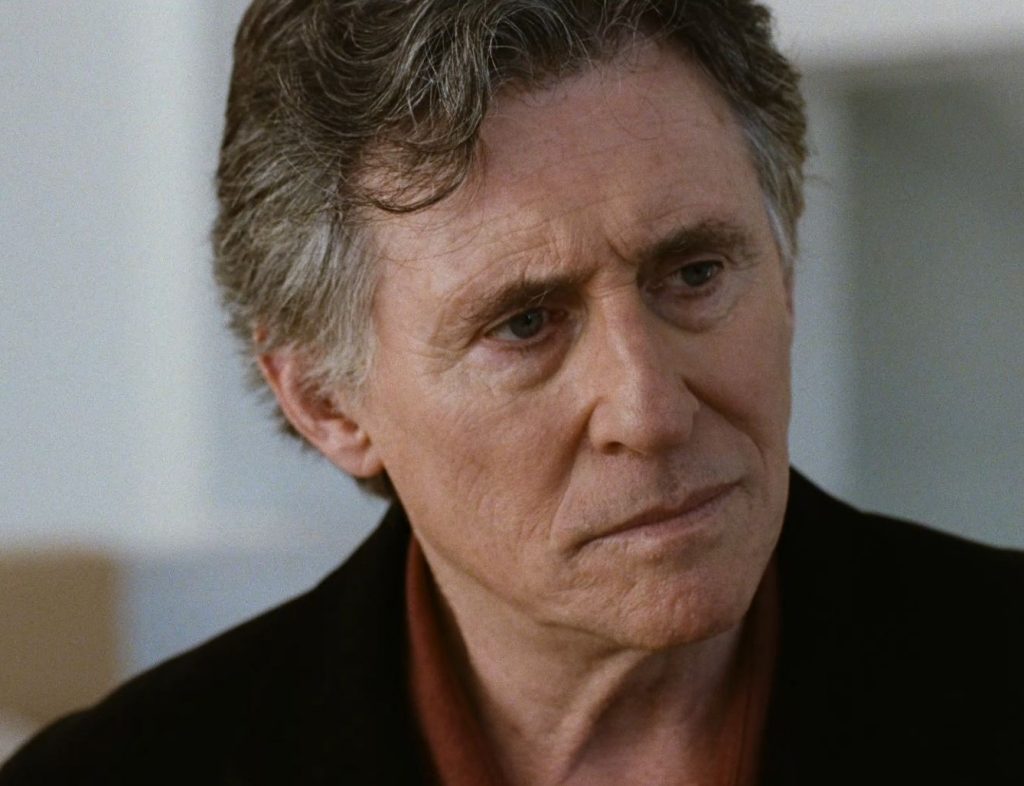 Helen Barlow/Irish Examiner: Gabriel Byrne has every reason to be enjoying life ahead of his new film

Long before he had agreed to star in Louder than Bombs Byrne had been impressed by the films of Joachim Trier (Oslo, 31. August, Reprise), and says the 41 year-old Danish director has a “unique voice and a singular vision”. He recalls responding with a quick, “Okay, fine”, when Trier asked if he could use footage from his 1987 film, Hello Again. But then he watched it.

“I didn’t realise what he was actually saying until I saw the scene,“and I thought my god how often does that happen in a piece of work that you get to see yourself from so long ago and then you get to see yourself now? It was interesting how innocent and young I was and you look back with a kind of hindsight and you say, ‘why was I so afraid, why was I so lacking in self-esteem and where was my confidence? I suppose that’s a product of being young but it’s also a product of culture as well. If I could go back I’d wish I had a sense of how unimportant most things are,” he says.

Byrne never watches his old movies on television not even masterpieces like Miller’s Crossing or The Usual Suspects.

“The past is the past. How many times do you sit around looking at old photographs of yourself? The past is intangible and irretrievable as is the future. I know that certain people have a propensity for nostalgia. It’s a kind of comforting thing. But one day I woke up and I said to myself, ‘I don’t have time any more for nostalgia’.” 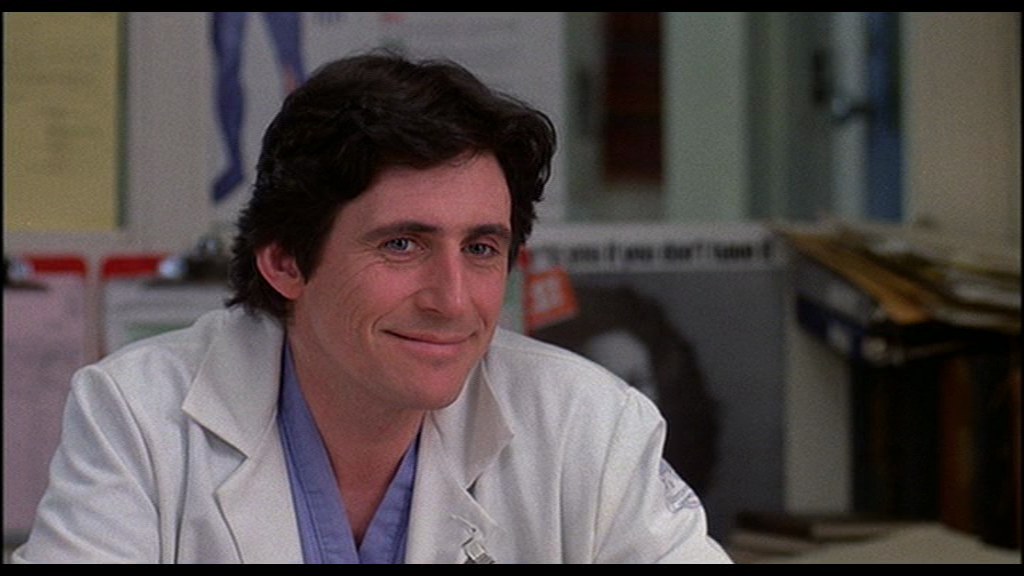 The Film Society of Lincoln Center

The Louder Than Bombs interview begins at 11:40 on the track. 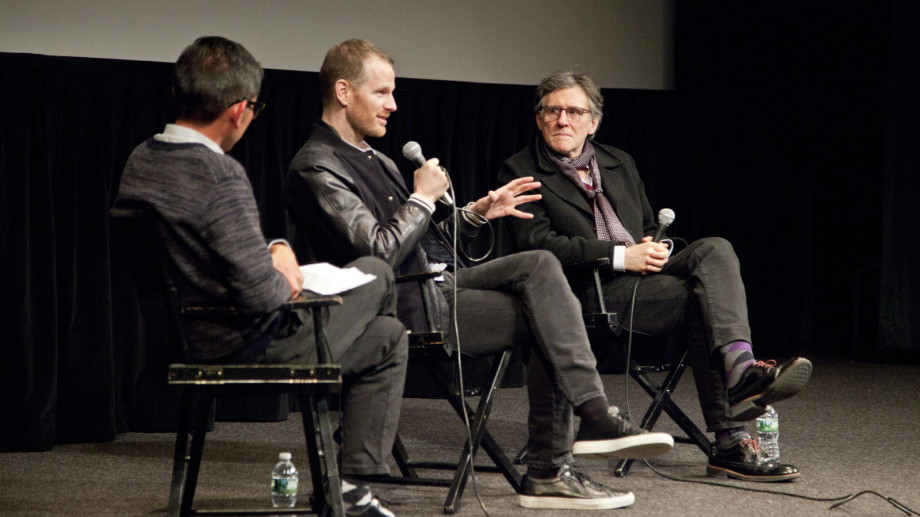 Mr. Trier and Mr. Byrne have a lot of fascinating things to say about their film

There seems to be a lot of dramatic potential in portraying messed up families.
I know this seems like a ludicrous comparison, but one of the shows I used to watch growing up in Ireland was “The Brady Bunch.” It produced a kind of incomprehensible envy in me. Those people had orange juice for breakfast and a father bounding down the stairs to give a kiss to the mother and the kids are all sitting around talking to each other so open and honestly. Then you think of something like “Long Day’s Journey,” which examines the reality of the complexity of family ties and neuroses and resentments and hatred and love. Or “Louder Than Bombs,” which is trying to look at the effect of grief on a family and what does it mean to be a father or a working mother? And how children pull away from their parents to develop their own identities. It’s the opposite of that warm fantasy of a family, that family I wanted to be in. O’Neill’s particular genius was this play, which is intensely autobiographical, is paradoxically universal. People will say, I know that situation. In “Louder Than Bombs,” we all know those moments of adolescence. We know about grief.

What appealed to you about the role in “Louder Than Bombs”?
We’re brought up to believe the heroes in our society are movie stars and basketball players when real heroes are people who go on from day to day. That’s heroism. Here’s a man trying to bring up two kids, both of whom are deceptive in their own way. The drama asks questions about not just grief but about life and death. And when you think about it, there’s only two things that matter. Life and death. 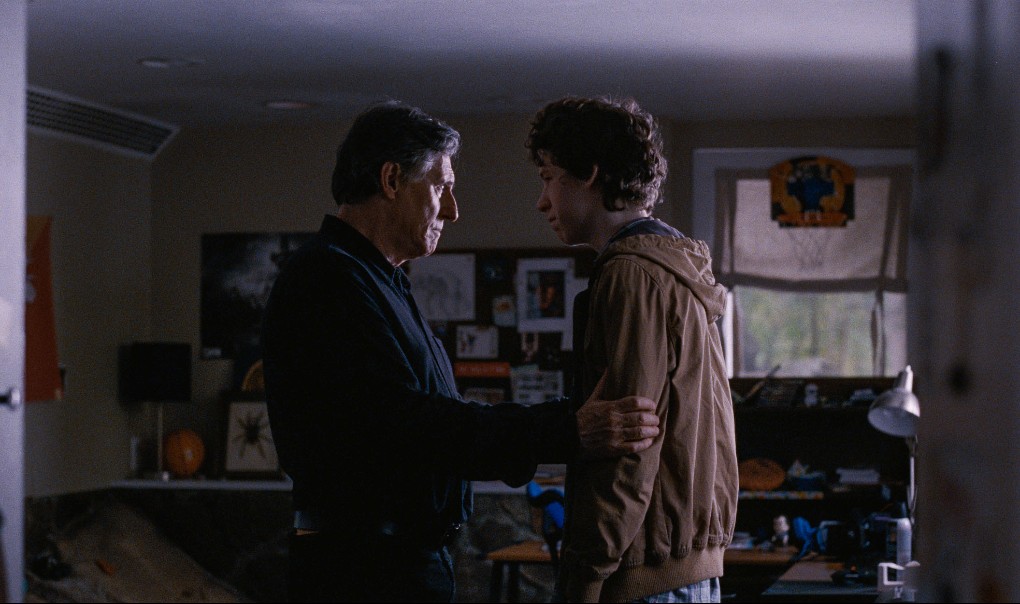 Matt Prigge/Metro.us: Gabriel Byrne on the generation gap, America and ‘The Brady Bunch’
The acclaimed actor lets his mind roam while discussing his new indie drama “Louder Than Bombs.”

On a lighter note: Your character is a former actor, and there’s a scene in the film where your sons, including the older one played by Jesse Eisenberg, look at one of his old clips, and it’s actually a scene from the “Hello Again,” a 1987 Shelley Long vehicle in which you had a key role. How did that get in the film?
[Laughs] I told Joachim, “I don’t know how I feel about that.” But to me it wasn’t about looking at a clip of an old movie I did. There’s a pathos to it. That scene was shot in the first two weeks I’d ever set foot in America. That was my young, naive self sitting across from someone I’d never heard of, who used to be mobbed during lunch hours. I was playing what the studio thought I was best suited for, which was light romantic comedy. I had a horrible experience making the film, to be absolutely honest.

But it made me think that you age in a different way on screen, which is one of the things that’s brilliantly done in “Sunset Blvd.,” which is the most extreme case. Most people don’t have themselves frozen like that in time. Although I’ve physically changed, I’ve also changed psychologically, emotionally and mentally, too. Those insecurities I had are not there so much anymore. Life does that to you. You ask yourself, “Does it matter if I f— up this take? Or does it matter if I just commit to it, do my best and enjoy it as much as I can?” Still, it was slightly unnerving having Jesse say, “I can’t believe you looked like that.” I was caught in a moment of reacting as my character and as myself — Lex Luthor making fun of me.

A bigger question might be: How many from 1987 can match Byrne’s virtually nonstop career?

“Funny you should say that. I suppose the longer you go from day to day, the more you realize your co-workers and friends and so on pass on. The thing I did in Ireland that really brought me into the movie business was John Boorman casting me in (the 1981 King Arthur movie) ‘Excalibur.’”

“It was the first color TV series in Ireland. I played an anti-­establishment protagonist and became very popular. That seems like 10 lifetimes ago. Most of the actors I worked with on that have all died, way too young.

“The ’80s in Ireland was a depressed place for sure, and not a place where movies were made. To have a career in movies was incomprehensible to a young theater actor like me.” 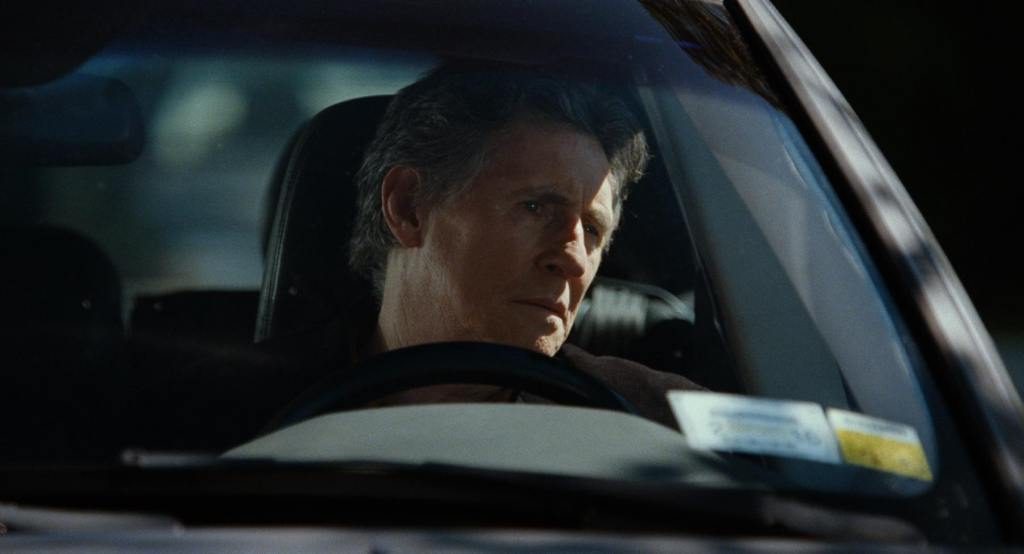 Perhaps as a brief respite from talking about his new film and his new play, Mr. Byrne took the opportunity to share his thoughts on the current political climate in Ireland!

Turning his attention to the centenary celebrations which took place over the Easter weekend, Byrne stated that “leading up to it I found it disconcerting that everyone was fighting to control the narrative for their own narrow end.”

Byrne highlighted that he felt it was a shame that, after the economic collapse of 2008 and the growing dissatisfaction among the people with the system of governance that “an alternative political will failed to coalesce, and that anger and that marginalisation that people have was not harnessed into a concerted positive action. So now, five years later, we have the same Tweedledum and Tweedledee situation where we’re asked to choose between people with different colour ties, essentially”.

Enjoy this clip from Louder Than Bombs, with Gabriel Byrne as Gene and David Strathairn as Richard.