NO PAY, NUDITY: The Reviews!

No Pay, Nudity opened in Los Angeles last night and the reviews are now coming in! The consensus is: Gabriel Byrne Shines!

We have been following the progress of this film for the past two years and it is wonderful to see it finally hit the big screen and receive such a positive response!

Enjoy these review excerpts and remember that No Pay, Nudity will be released on DVD and Blu-ray and will stream at various outlets on December 17, just in time for the holidays!

But it is Byrne’s wholly inhabited, sweetly melancholic turn — he’s Willy Loman with an Equity card — that richly deserves its extended time in the spotlight.

Ultimately resigned to playing the part of the Fool in a Dayton, Ohio, production of “King Lear,” yet still clinging to a shred of dignity, his muted tragicomic performance movingly takes “have more than you show, speak less than you know” to heart.

The screenplay by Ethan Sandler builds toward potential breakthrough moments only to gloss over them, but the performances dig deeper, especially Gabriel Byrne’s turn as Lester Rosenthal, stage name Lawrence Rose. With his doleful gaze and ill-fitting suit, Byrne delivers a portrait of uncertain hopefulness, by unpredictable turns weary, bitter and openhearted…

Byrne’s performance is a masterful symphony of illuminating off-key chords as Lester confronts the painfully late-in-life question of whether acting is his true calling. It’s a fascinating and difficult self-confrontation. If the film proves too ready to resolve that confrontation smilingly, Byrne provides its underground charge with his offhand, off-center poignancy.

The Wrap: ‘No Pay, Nudity’ Review: Gabriel Byrne Shines as a Struggling Actor

In one of the film’s deeply felt moments, Herschel takes Lester aside for a good talking-to. “Stop counting other people’s blessings or you will never find any peace in this God-forsaken world,” he counsels him.

It’s not as if Lester is a bad guy, and Byrne’s performance gives him a full measure of humanity. Amidst the conflicting emotions, his face registers the kindness and compassion that probably had made him a good actor once upon a time. He’s been in a TV soap opera and on Broadway and had some highs, but now is definitely not one of them…

Wilkof does a good job staging a few scenes from “Lear” and manages to conjure up the feeling of the play, working with obviously limited resources, and overall in “No Pay, Nudity,” he creates a world where there are no villains, nor dark secrets to be revealed. These are just decent people, trying to do what they love. 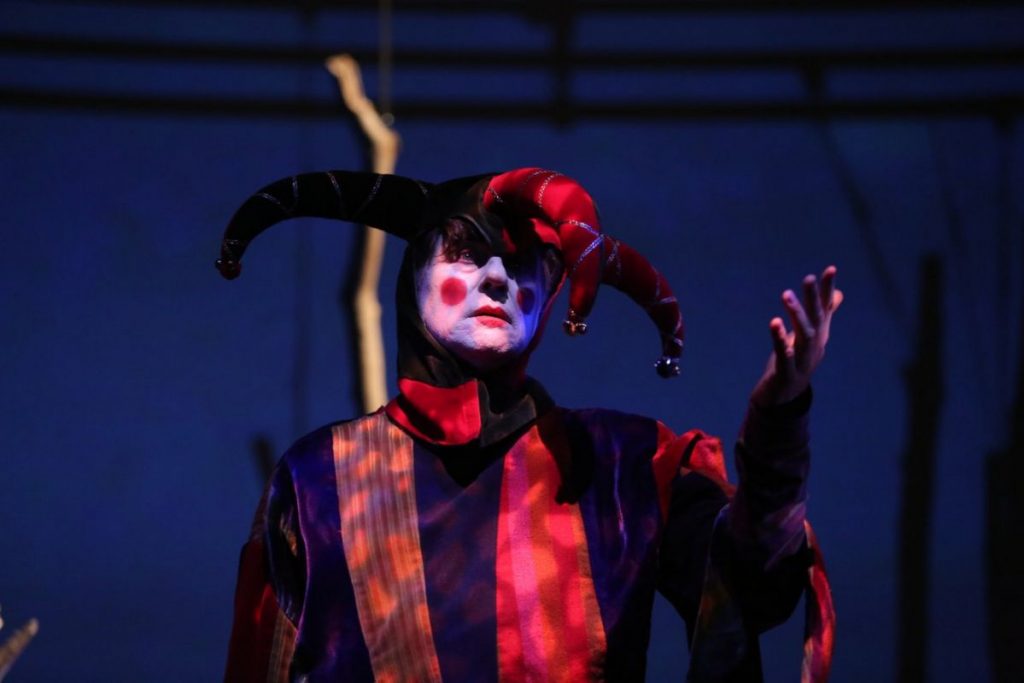 Distributed by Monterrey Media, the film has yet to  book a New York outlet, which seems ridiculous on the face of it. However, it will be available in December on Amazon and iTunes, and Starz has picked it up for the spring. But if New York bookers are reading, check it out. It’s the best Broadway show not on Broadway.

Paste Magazine provided one of the first reviews of the film and it has been mentioned in other postings, but here is my favorite part of the review (again):

Pretty much all “creative” people, get The Talk at some point. From a teacher. A mentor. An older friend. Our parents. All of the above. The Talk is about how, no matter how much you love it, trying to make a living as an actor, a musician—a writer—will devour you like something out of HP Lovecraft and you should run screaming while you still have the ability to run, because your knees will wear out from all the time you spend on them, begging, or—you know. Usually there is a line in there to the effect of “If you can think of one single thing you could be happy doing—one single other thing—for God’s sake do that.”

In No Pay, Nudity, Lester Rosenthal (played superbly by the incomparable Gabriel Byrne) is an actor who was told that, once. He didn’t listen. He joined the tenacious ranks of the asbestos-coated souls who don’t care what it costs them, the people who either have incredibly fracture-proof patellas or we seriously, truly, for reals couldn’t imagine ourselves being happy doing anything else. The epic asshole that is Art in a Capitalist Economy? It not only doesn’t give a shit about your talent. It has no respect for your loyalty or devotion or work ethic, and it lets you have the full blast of its fickleness, cruelty, terrifying financial instability and ego-crushing indifference. Over and over.

If you have been keeping up with the news for this film, the trailer is probably something you have memorized by now. Still, it is such a GOOD trailer, so here it is again!

As new reviews are published, you will find them here, so come back often! heart