Heartfelt congratulations to Gabriel Byrne and his colleagues on the exciting and well-received opening night of Long Day’s Journey Into Night!

The Roundabout Theatre Company production had been in previews for the past three weeks and last night was the official premiere. The stars came out to support the play and the reviews came pouring in!

Photos from the opening night are available at Theatermania (see the celebrities, such as Jessica Chastain, Sarah Paulson, and Nathan Lane, who came out to support the play!) and BroadwayWorld.com/Walter McBride (opening night curtain calls!). I’ve included a sampling  from both websites below.

Now, on to the (glowing) reviews! 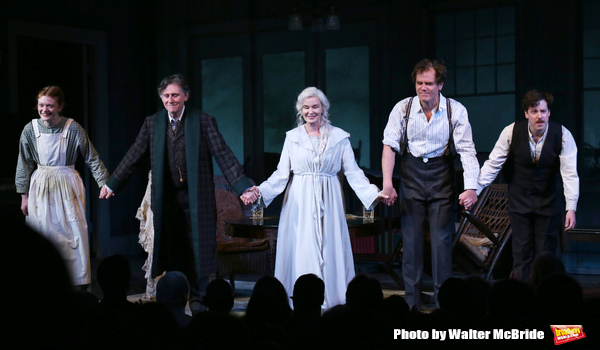 Yet you can’t avoid the feeling that this tempestuous climate is artificially controlled. All of the leading performers in this production are proven powerhouses. They all have at least moments of the probing intensity that they’ve shown in their previous work. And Mr. Byrne serves one of the most subtle, fine-grained slices of theatrical ham on record…

As the selfish, scared Tyrone Sr., Mr. Byrne gives such a beautiful performance — a haunted and haunting incarnation of fraying majesty — that, for once, I found myself waiting eagerly for his character’s windy, self-explanatory monologue in the second half. That’s the one in which he speaks of the road not taken in his acting career, when he chose commercial over artistic success.

“Waste” is a word that he uses ruefully and frequently, as befits a man who lives in irrational fear of the poor house. But there’s not a wasted gesture or inflection in Mr. Byrne’s performance. (Watch, for example, how he hides his wallet when he takes money from it.) His character, an emblem of squandered potential, paradoxically turns out to provide this disjunctive production with its one memorable instance of great potential fulfilled.

The tenderness between Gabriel Byrne, in the towering role of the fading Broadway actor James Tyrone, and Jessica Lange, as his beloved but tormented wife Mary, brings welcome relief from the overall misery of Eugene O’Neill’s semi-autobiographical masterwork, “Long Day’s Journey Into Night.” As staged by British director Jonathan Kent and acted by a cast that also includes Michael Shannon, the Roundabout Theater Company’s outstanding revival has a lighter tone and softer edges that, paradoxically, impart a deeper sorrow onto this classic domestic tragedy…

Byrne’s performance as James Tyrone, Sr., is quietly commanding. As the head of this theatrical household (James, Jr., is an actor and Edmund writes plays), he is grandly magisterial, shouting down charges that he’s a skinflint to his family and a poor-mouthed miser who only opens his wallet to buy property.  But there’s pain in his eyes that darkens with every accusation, including the latest one that he’s sending Edmund to a cheap sanatorium. If this isn’t exactly guilt, call it dawning awareness. And there’s no denying his anguished tenderness toward Mary.

But Byrne is the only male in this theatrical family who sounds like an actor. He may have shrunken in stature over the years to an old ham, but when he slips into a Shakespearean role, he becomes a ham with real stage presence and a gorgeous voice.

Gabriel Byrne (who last played on Broadway in 2005) is Mary’s husband, James, the miserly matinee-idol who claims to have never missed a performance for drunkenness—though he was apparently less diligent about his marital assignations. Mr. Byrne is humanly warm yet inhumanly fierce; he is immensely controlled, damming a reservoir of anger and disappointment that can flood over him suddenly and just as quickly be contained. He also pulls off the difficult task of revealing just how much love and sentiment is mixed in with his fear, fury and self-loathing—though the portrayal could have been broader, in order to encompass the “ham-actor manner” O’Neill mentions..

One of the virtues of this production is that it avoids such cynicism by taking O’Neill’s description seriously; he called it a “play of old sorrow, written in tears and blood” but it was written too “with deep pity and understanding and forgiveness for all the four haunted Tyrones.” That deep pity and understanding is felt by the characters for each other as well (even, occasionally, by James Jr.). They mourn each other’s failings even as they are driven to intoxication by them. 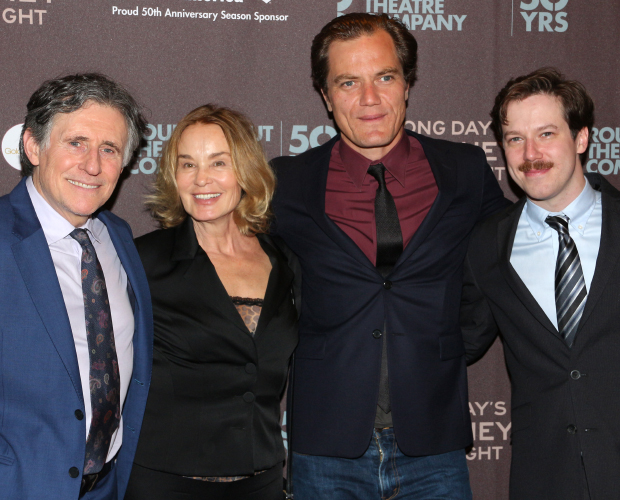 The cast on the red carpet/ Photo by David Gordon

Byrne and Lange capture the way families can be civil one moment and at each other’s throats the next. Theirs is a mesmerizing dance of death.

James Tyrone is as miserly as ever in the Roundabout Theatre Company’s Broadway revival of Eugene O’Neill’s “Long Day’s Journey Into Night,” which opened Wednesday at the American Airlines Theatre. Gabriel Byrne plays Tyrone with reserved, desiccated style. Every prematurely extinguished lightbulb, all those cheap hotel rooms he booked on the road, that quack doctor he ordered for his wife, and now the charity sanitarium where he’ll send his son to die of consumption — it’s all there in the tight, controlled way Byrne talks and moves and even sips his whiskey. James Tyrone has squeezed so much from life that he appears almost mummified in that vest suit he never unbuttons, and could well have been wearing for years, if not decades.

In a Broadway season of big (often too big) performances, Byrne’s portrayal stands out for its understatement, and something else, too. Amid all the stinginess, he brings a palpable love to his relationship with Mary (Jessica Lange), the wife he has single-handedly destroyed.

Gabriel Byrne, no stranger to O’Neill himself — his previous Broadway stints were in revivals of A Moon for the Misbegotten and A Touch of the Poet — presents a James Sr. who has retained the courtly elegance and Irish charm that endeared him to audiences, and to Mary. Byrne conveys his character’s affability, and his love and concern for his wife, so easily and with such tenderness that we are continually unsettled when reminded of his less appealing qualities. The narcissism and miserliness that have undone his career and caused his family such suffering are portrayed in a matter-of-fact way, as is his searing disapproval of elder son Jamie. 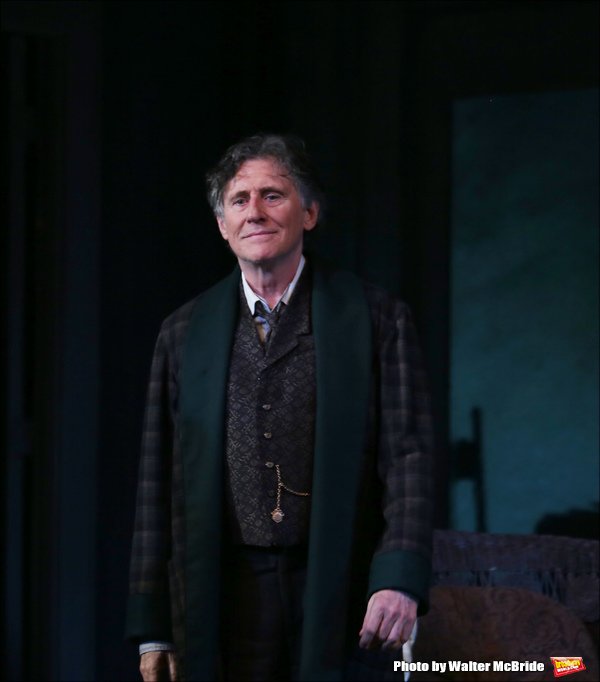 This is it. Eugene O’Neill’s masterwork “Long Day’s Journey into Night” is the pinnacle of mid-20th century American realistic drama — a simple but emotionally epic testament by the father of American playwriting to his Irish-American family and the vices that destroyed them.

The Roundabout Theatre Company is finishing off its season with a strong revival of the four-hour tragedy staged by English director Jonathan Kent and led by a powerful quartet of actors: Jessica Lange, Gabriel Byrne, Michael Shannon and John Gallagher Jr…

As James, Byrne shows vulnerability behind the miserly and defensive exterior. He also can’t help but be the most authentically Irish.

Lange was Olivier Award-nominated for this role 16 years ago on the West End. Byrne was Tony Award-nominated as Jamie Tyrone in 2000’s Broadway “Moon for the Misbegotten.” They know their O’Neill, and are suited to take us on the roller-coaster ride, set across one day that will prove a turning point in the lives of a troubled family…

Leads Lange and Byrne share an effortless chemistry in which they are alternately tolerant of, and vile toward, one another—but always easily relatable. That’s quite an accomplishment when dealing with a piece of literature that drifts further away from naturalism as the the night wears on…

Byrne, as a semi-successful actor taxed by memories of an impoverished childhood, has to come off as a horrible person, willing to sacrifice his family’s health and happiness to save a buck, but also as a man aware that’s his failing. He succeeds, marvelously. 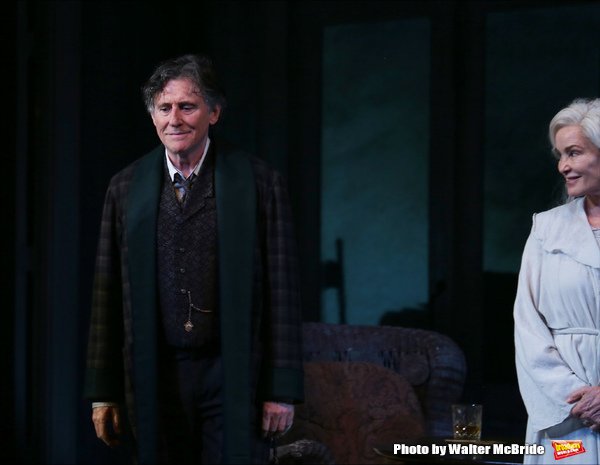 Long Day’s Journey Into Night is now having its fifth Broadway revival in a magnificent production by Roundabout Theatre Company at the American Airlines Theatre. Director Jonathan Kent and an extraordinary cast led by Jessica Lange and Gabriel Byrne have achieved a masterful staging of the undisputed classic.

Director Kent focuses on the play’s preoccupation with old memories by creating a dreamlike atmosphere from the opening scene as a wavelike curtain drifts across the stage and reveals Byrne and Lange together. The pair have a natural, often charming chemistry, poignantly portraying the long-married Tyrones whose real but weather-beaten love has managed to last over the years because of a steady habit of denial and silence…

Byrne also gives a brilliantly nuanced performance as the miserly father and frustrated actor who made a career out of a single role and never realized his potential. With his subdued Irish brogue, Byrne portrays James with a gnarly grace, attacking his sons for their abandonment of the Catholic church (the reason he believes they all suffer now) but later withering under the weight of guilt for caring more about money than his family’s well-being.

More reviews are available in the Review Round-up provided by BroadwayWorld.com, whom we thank! 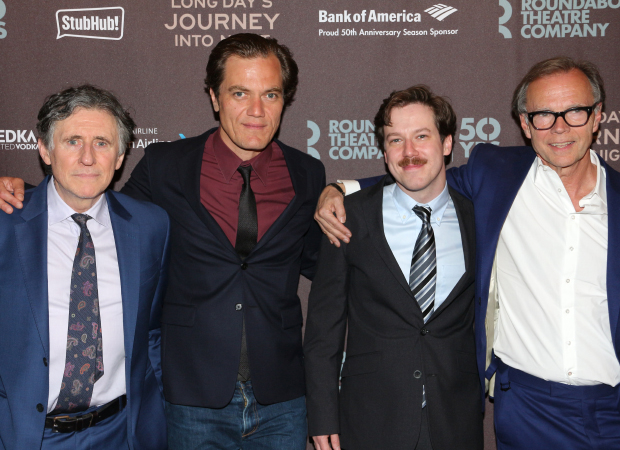 ShowScore aggregates reviews from critics and theater-goers and scores the play’s overall success. So far, Long Day’s Journey Into Night has scored an 83. Check out their website for comments and more info.

And finally, just in case you thought being a Broadway star was easy:

Byrne, appearing in his third Broadway production of a major Eugene O’Neill play, echoed that sentiment. “It requires focus and discipline and stamina and energy,” he said. “You have to really take care of yourself. You have to go to bed early and you have to eat properly. You have to exercise. And weirdly enough,” he added, “you have to keep your head clear of doubt and fear and all the demons that come out of the cupboard and try to diminish you. You have to keep a very clear connection to the play.”

Director Jonathan Kent put it more succinctly. “It’s a fiendishly hard play to do,” he said. 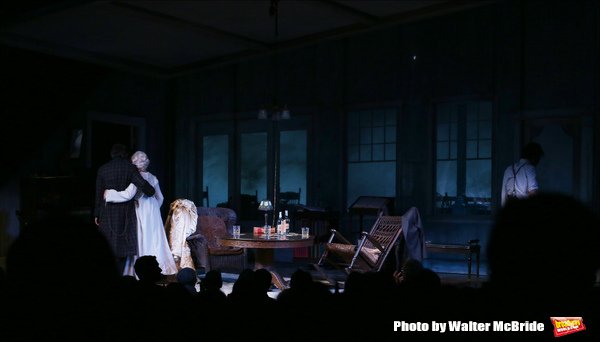 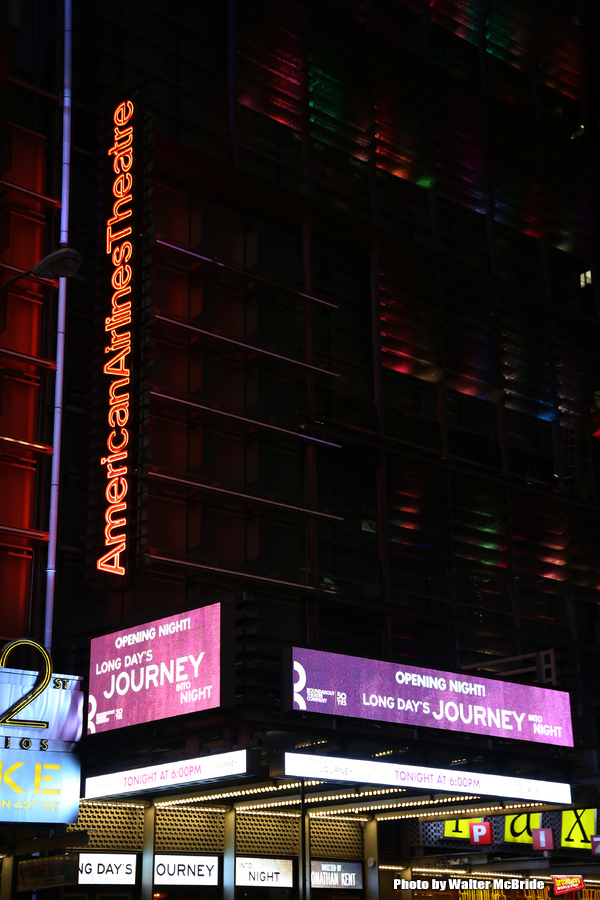 There will be more, of course, so stay tuned! And once again, kudos to the cast and crew of this revival of Eugene O’Neill’s masterpiece! heart