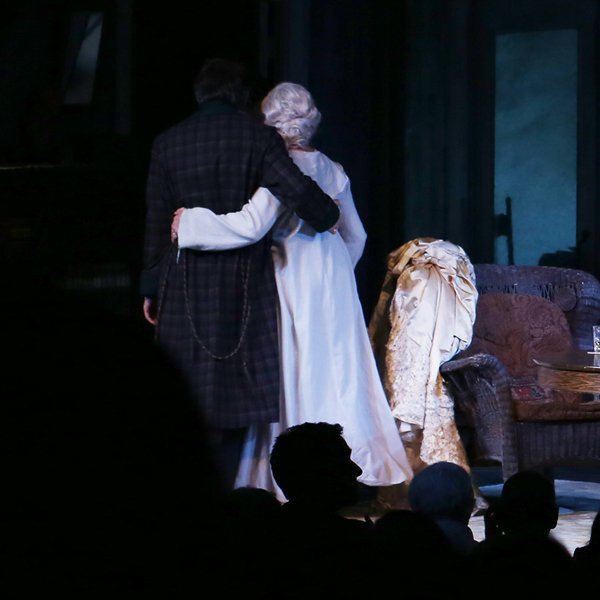 Kristen Skeet has previously shared her experience seeing Long Day’s Journey Into Night, as well as her meeting with Gabriel Byrne during the run of the play in New York City. And we thank her!

Here is her report on the final performance of the play. She captures not only the evolution of the play and the actors from the play’s opening night to its last, but also how we in the audience feel as we watch the brilliance that is occurring on stage. I can say this because I saw it, too, sitting stage right with an unobstructed view of Mr. Byrne’s face, and I believe she is right.

What a lucky fan, to see the play more than once and to meet its star. Thanks for sharing, Kristen!

Let me start by saying the entire cast of Long Day’s Journey Into Night brought their proverbial “A” games Sunday. It was the most powerful production of any play I’ve seen, not just this one. I’m going to focus on Gabriel for this write-up (and a bit on Jessica too) but every moment of this show was stellar, from each and every one of the actors. Kudos to Gabriel, Jessica, Michael, John and Colby.

I saw the play opening day of previews on April 3. As was to be expected so early on in the production, there was a sense to me that this wasn’t quite a family, at least not yet. They were great performances by all, but, for instance, it was hard for me to believe Michael Shannon as Gabriel’s son. I’m not sure if it was the height disparity or the fact that Michael’s voice is so booming—maybe a little of both—but it was hard for me to see them as father and son. I didn’t quite believe John Gallagher Jr. and Michael as brothers either. Gabriel and Jessica were lovely together as husband and wife, and the chemistry was there, but it was nothing compared to the dynamic between them on Sunday. The same could be said of the entire cast.

Sunday, this was not four actors acting as a family. This was the Tyrone family, and we in the audience were just sullied voyeurs, crouched outside the window of their home, peeking inside, greedily witnessing the supremely intimate unraveling of this beautiful and damaged family.

My seat was in the right side orchestra box, which was close but had a partially-obstructed view of the back right side of the stage. I chose the seat so I could have a clear look at Gabriel’s face when he sat in James Tyrone’s chair. I’d only sat on the left side of the theatre before, so I felt maybe I’d missed some of his expressions while he was in that chair, or only caught them in profile. I’m so glad I chose the box seat. We all know how powerful Gabriel’s gaze is. With an unobstructed view of his face, being able to see his eyes, it felt like a completely different play. 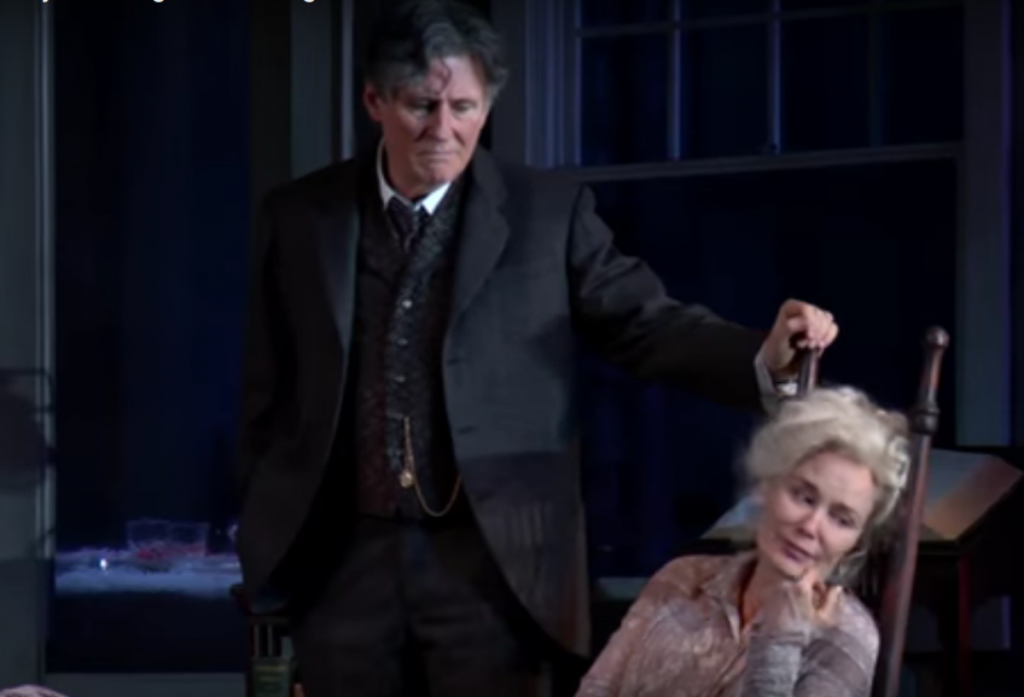 Gabriel and Jessica had an almost violent passion between them in the angry, bitter moments between James and Mary. They were brutal and cutting and unrelenting—eyes on fire and wet with tears. Grabbing at and yanking on each other; pounding the table top ferociously; thrusting a finger of accusation in the other’s face while snarling yet another accusation. Then, in the very next moment sometimes, the anger dissipated and the love returned, real love, and that love was as equally passionate as the anger, only tender and sweet and forgiving. They flirted and coddled and kissed one another like newlyweds. The energy these two powerhouses gave to each other was palpable. It resounded from them so strongly it reached me in my seat. I could see it happening in his eyes: when Jessica blasted him, his eyes grew fierce and he exploded back at her, and vice versa. I’m so grateful to have witnessed it.

Gabriel was sobbing in Act IV, as an increasingly intoxicated and vulnerable James tells an equally drunken Edmund the story about James’s dear mother, who’d been abandoned by his father, left penniless and alone in America, with four young children to feed, clothe and shelter. James explains how he was forced to quit school at ten years of age (a mocking indictment thrown at him earlier by morphine-addled Mary) to work in a factory all day, every day and night, for fifty cents of pay per week, to help support his family, now that he was the new man of the house. He tells of one Christmas Eve, when his mother received an extra dollar from one of her employers, and spent it all on food for her children, and how happy his mother was that night because, for once, her children had food enough to eat. These were gut-wrenching sobs. They left Gabriel unable to speak at times, his face pressed into a kerchief. Tears poured from his eyes. This wasn’t just acting. Gabriel went somewhere very painful for that scene and it broke my heart. I cried with him. I wanted to hug him and James and tell them both everything would be okay. It chokes me up still, thinking about it again. 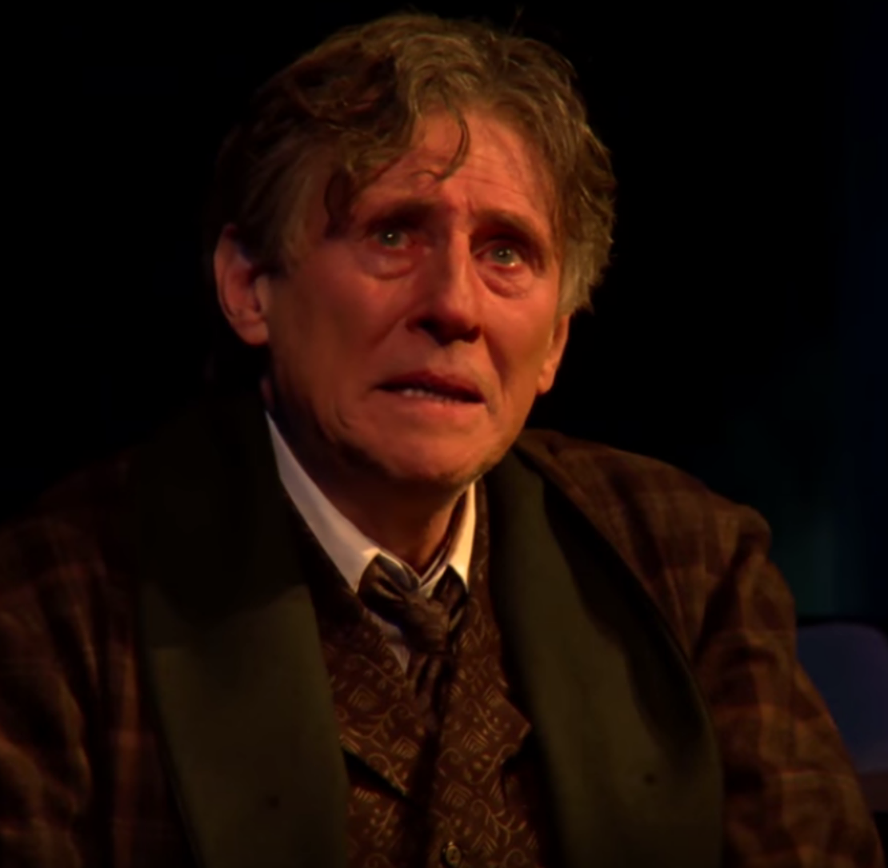 The applause at the end was thunderous, and it was the first time Gabriel had really smiled during curtain call, of the shows I’ve seen. He’d appeared understandably drained at previous shows, offering a small smile when he bowed as if that was all he had left. Sunday, he had a genuine GB smile on his face. The rest of the cast bowed together on his cue. Gabriel and Jessica walked away together, arms round one another. He pulled her close, and they kind of shook each other, like excited children who’d just been released to recess, as they disappeared backstage. I walked out onto 43rd Street and wondered how on Earth I could possibly just carry on with my life after that.

I got to The Sheen Center an hour later for the Frank McCourt tribute, still devastated for the Tyrone family, puffy-eyed from crying, and my mind was still reeling. I was haggard from all but running to catch the subway to make it to the tribute on time. And out walks Gabriel onto the stage, looking completely refreshed and calm, to give a soft-spoken and compelling, off-the-cuff speech about Frank that lasted more than nine minutes, as if he hadn’t just suffered through severe, emotional trauma less than two hours before. How does he do that? 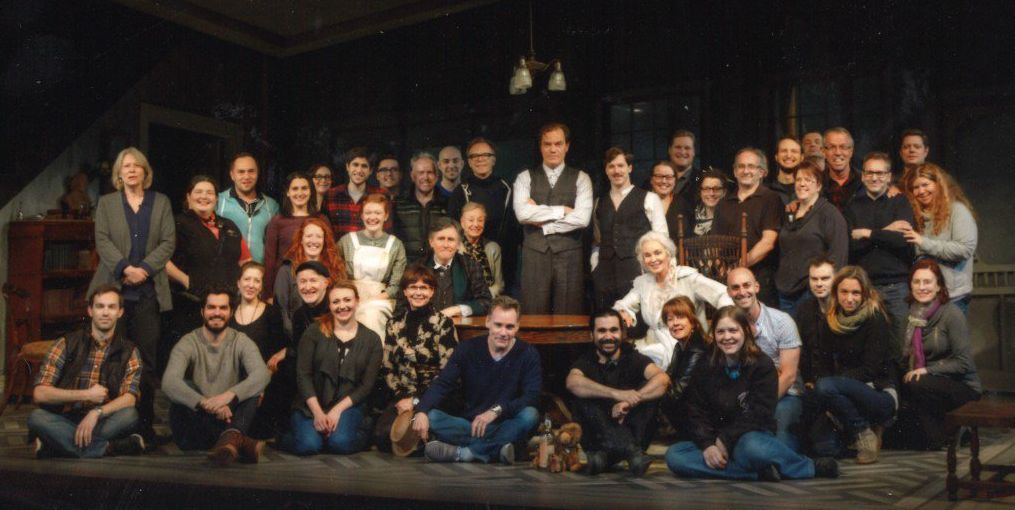 Cast and Crew for Long Day’s Journey Into Night