INTO THE NIGHT Screens at Austin Film Festival

Helen Whitney’s new documentary, Into the Night: Portraits of Life and Death, will screen at the Austin Film Festival in Austin, Texas on October 30.

Oscar-nominated, Emmy, Peabody and DuPont award-winning film producer, Helen Whitney,will present her two-hour feature documentary, “Into The Night: Portraits of Life and Death” at the State Theatre, 719 Congress Ave, Austin, 78701 on Monday, October 30th at 6:30pm. Q & A will follow. Whitney will be joined by Rocky Schenck, a formerly Austin-based photographer whose work is featured in the film. The film is narrated by Oscar-nominated, award-winning actress Sharon Stone.

She talks about surprises she experienced while filming in an interview for the festival:

Another surprise was the uncertainty. Few people have their story together. In the words of Gabriel Byrne, the eloquent actor who opens the film: “We are all doubting Thomases at the end.” Atheists as well as believers. Even those who find their narratives of comfort in nature, or art, or science or in the mysteries of the universe. The stories we hold onto in the daylight with fierce certainty can seem like gossamer at 3am.

And she has this to say about Austin, Texas:

On a lighter note, it is somehow fitting that my film should premiere in Austin for it is here, 20 years ago that I discovered in a small downtown bookstore Austin’s great photographer and video artist, Rocky Schenck. Rarely has an artist spoken to me so directly and powerfully. His haunting images are central to the vision of this film. They speak to the mystery of our life and death with poetry and precision. They permeate “Into The Night.” Rocky and I are looking forward to spending time together in his town, and having some Texas fun.

Here is the festival poster for the film: 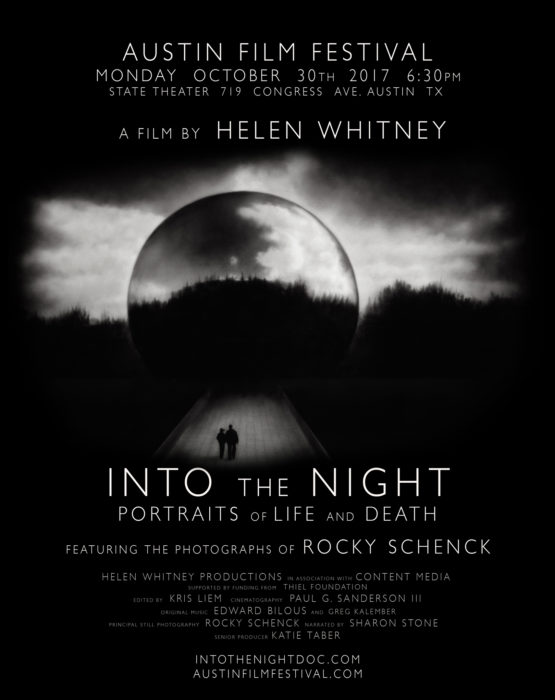 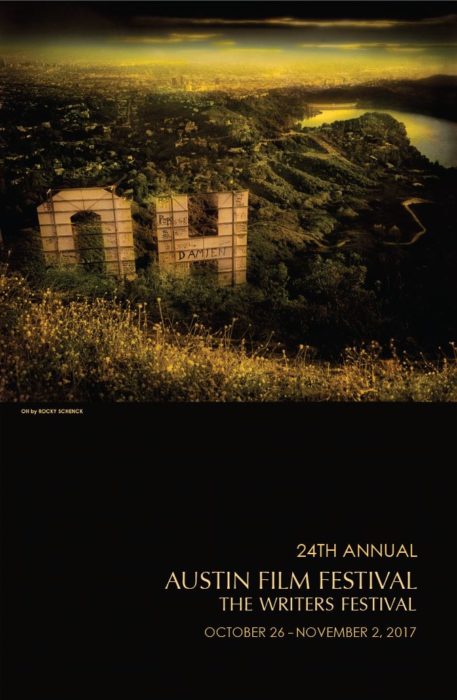 We don’t know how. We don’t know when. But death comes for us all. To be human is to wrestle with this truth and with the great unanswered question: How do we live with death in our eye? To borrow from Dylan Thomas (whose poem opens the film): Do we go gently or raging against the dying light? Or between these two extremes? Do we depart with equanimity or with anger? With clenched fists or more commonly with denial? Or do we see death as something to be fought and even possibly conquered, a challenge increasing pursued by some of the brightest scientific minds. Finally, what are the stories we tell ourselves as we go into the night – or into the light? “Awakening: Portraits of Life and Death” features fascinating, unexpected voices from various walks of life, old and young, believers and unbelievers, dying and healthy, well-known and obscure. For them death is no longer an abstraction. Whether through a dire prognosis, the imminence of their own death, the loss of a loved one, a sudden epiphany, or a temperament born to question, these are people who have truly ‘awakened’ to their mortality. The film is meant to raise ultimate questions, not to provide answers. How could it? Death is “that undiscovered country,” as Hamlet so famously described it, “from whose bourn / No traveler returns.”

More news about the film as it happens. Congratulations to Ms. Whitney and her associates on their achievement! heart