MAD TO BE NORMAL Premiere!

The closing night Gala Screening at this year’s Glasgow Film Festival, which runs February 15 – 26, will be the world premiere of Mad To Be Normal, starring David Tennant as that famous Glaswegian, R. D. Laing. Expected to attend the event, and the after party, are director Robert Mullan and Mr. Tennant, as well as “other cast members to be announced.” So we can hope that our favorite Irishman, who seems to be in Ireland at the moment, working on a documentary about George Bernard Shaw, will make an appearance at this very Scottish event!

…Mad To Be Normal offers a powerful account of Laing’s Kingsley Hall experiment with a stunning performance from David Tennant that truly gets under the skin of an utterly compelling figure. Tennant’s nuanced, complex work conveys a sense of Laing’s immense personal charm and the combination of intelligence and arrogance that made him equally revered and reviled. The film also captures the darker side of a mercurial man who rarely made it easy for those who dared to get close to him, especially his lover Angie (Elisabeth Moss). A magnificent ensemble cast includes heartrending performances from Michael Gambon and Gabriel Byrne.

The Guardian is pretty excited about the festival’s closing film, as well as the opener and all the films to be shown in between!

And Gabriel Byrne would be pleased, I think, to see that Pat Kane, writing for The National (“the newspaper that supports an independent Scotland”), finds a strong connection between the film and world current events:

“A LITTLE girl of seventeen in a mental hospital told me she was terrified because the Atom Bomb was inside her. That is a delusion. The statesmen of the world who boast and threaten that they have Doomsday weapons are far more dangerous, and far more estranged from ‘reality’ than many of the people on whom the label ‘psychotic’ is affixed.”

As The Donald inches closer to the nuclear launch codes, this quote from the late Scottish anti-psychiatrist and 1960s guru RD Laing has been rattling around my head. Mad To Be Normal is the title of the biopic of Laing’s life (with David Tennant in the main role) that will close the Glasgow Film Festival this year.

It looks like quite the Paisley-pattern nostalgia trip. But expect the movie to raise all the same controversies that Laing did when he set up his “safe havens” such Kingsley Hall in London in the early 1970s…

There is no trailer at this time, but there does seem to be an official poster now. I’ve embellished it with the good news! 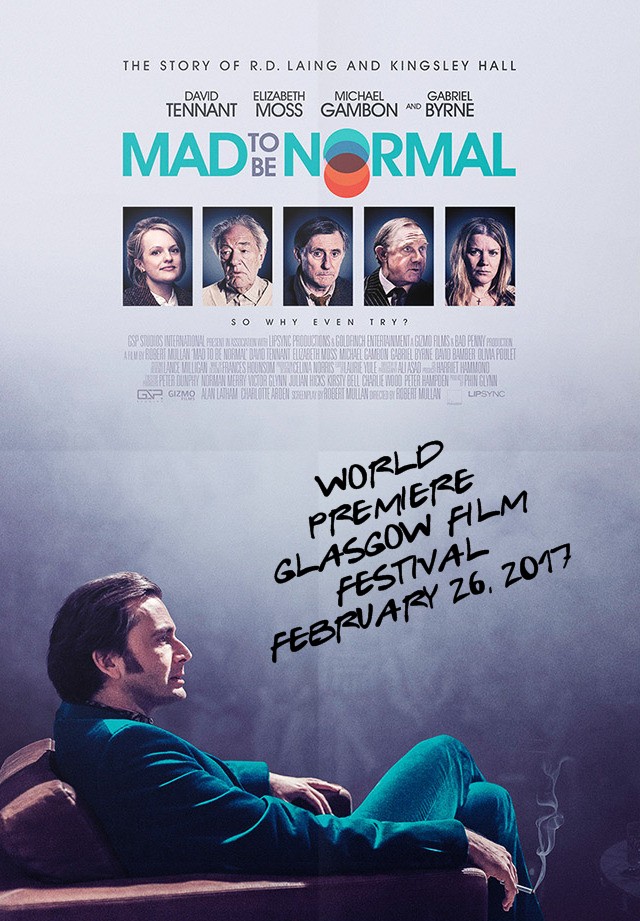 So, stay tuned for reaction to the film at the festival and more news as it happens!