The Daily Mail UK reports that Gabriel Byrne tripped and almost spilled his coffee while filming Maniac in New York City on Thursday. Now that’s news we can use. wink 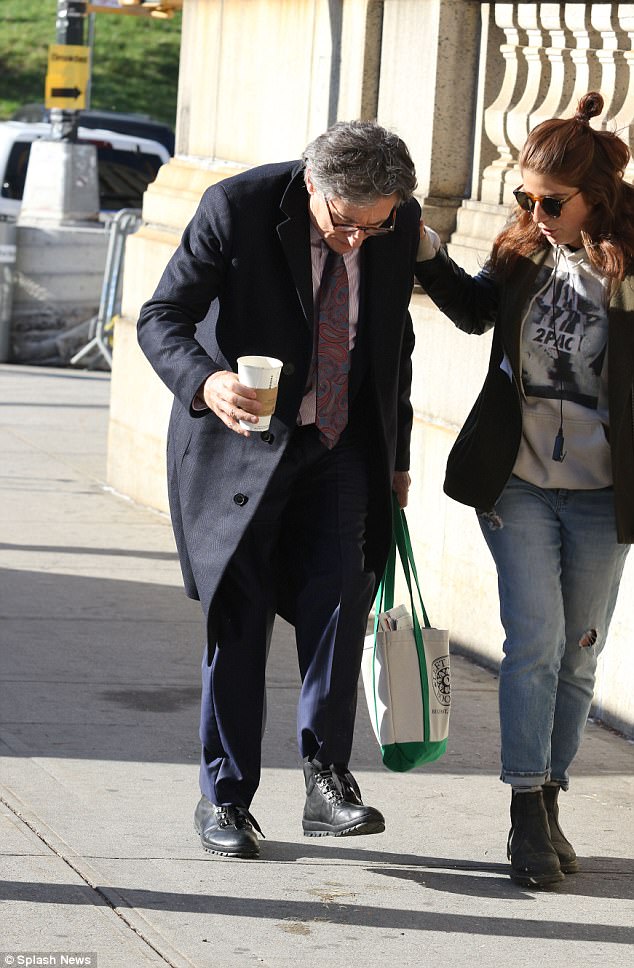 The Daily Mail also noted that the “impressive” cast of Maniac has grown to include Sting’s wife, Trudie Styler, and Sally Fields. No word yet on who they are all playing. This is exciting, isn’t it?! Stay tuned!

It is going to be a cool series, no doubt about it. Cary Fukunaga (True Detective Season 1!) is directing, Jonah Hill (War Dogs) and Emma Stone (La La Land), and now Justin Theroux (The Leftovers) and Jemima Kirke (Girls), are all starring, Patrick Somerville (The Leftovers) is writing, and the story-line? Well, let’s just say it is insane. Or something.

What am I talking about, you ask? The new Netflix series Maniac, of course. And why am I talking about it? Because NOW it seems Gabriel Byrne has joined the project, too! No official word on this yet, and no information on the role he will play, but he was hanging about with Jonah Hill and Cary Fukunaga on location in NYC and he was wearing a suit, so—it looks like Gabriel has another new project!

Jonah Hill was spotted getting into character while shooting his new Netflix series Maniac!

The 33-year-old actor showed off his slimmed-down physique as he filmed on Wednesday (October 18) in New York City.

He was joined by his co-star Gabriel Byrne.

Check out the other pics at Just Jared.

“Maniac” is a 10-episode drama based on the 2014 Norwegian series. Hill and Stone’s characters are patients in a mental asylum and a majority of the season will take place in their dreamed-up fantasy worlds. Think of it as Fukunaga’s version of “Sucker Punch.” Theroux is playing a character named James Mantleray, who is rumored to be an alcoholic mad scientist. No character description has been confirmed.

Fukunaga just kicked off production on the series this month in New York City. Paramount TV and “Mr. Robot’s” Anonymous Content are producing.

Girls‘ alumna Jemima Kirke is set to recur opposite Emma Stone and Jonah Hill in the high-profile 10-episode Netflix series Maniac. Character details are being kept under wraps.

Maniac, written by Patrick Somerville based on the 2014 Norwegian series, revolves around the fantasy worlds of Hill and Stone’s characters. Filming is underway on the Paramount TV/Anonymous Content dark comedy in New York City, with Cary Fukunaga set to direct all episodes.

There is an official page for the Maniac series at Netflix, but only this has been posted so far: 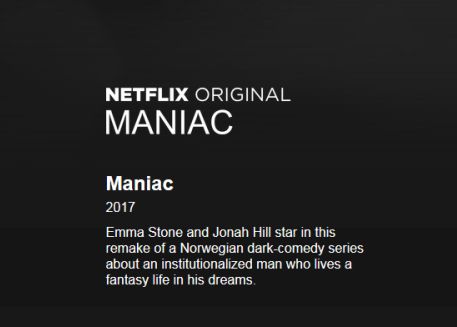 And that’s all the news about Gabriel and Maniac. We hope for promotional stills, posters, interviews, a trailer maybe–who knows what might be coming our way? This news was a big surprise–and that’s one of the things we love about our Irishman, isn’t it? wink

PS. This could be a cameo for Gabriel, or a small part, or a major role. No way to know just yet, so stay tuned!