Autumn is on the way! Where I live, there are no leaves to fall because we have no trees, but there is a decidedly cooler tinge to the morning air and it is very welcome. After a quiet summer, autumn is the time to put away our past-times and get ready for the serious fun of a busy season. This is why Gabriel looks so intense in the banner above! And autumn, of course, brings news of Gabriel’s movies, television projects, and other activities.

Speaking of movie news: Check out this recent posting for an update on the Lies We Tell premiere and the film festival schedule for Gabriel’s new drama!

Happy (serious and intense) Autumn to you!

At last! Carrie Pilby is starring on Netflix in the USA! Check your Netflix and see if she is there.

It is such a lovely and funny film. Gabriel’s role, though small, is important. He plays Carrie’s dad, after all. And there is a (tiny) fight scene! But I will say no more. See it! heart

Also, author Caren Lissner, who wrote the book, has an in-depth article in The Atlantic Monthly: How My First Novel Became A Movie and she offers us a realistic picture of the process of turning page to film: the ups, the downs, and the in-betweens. 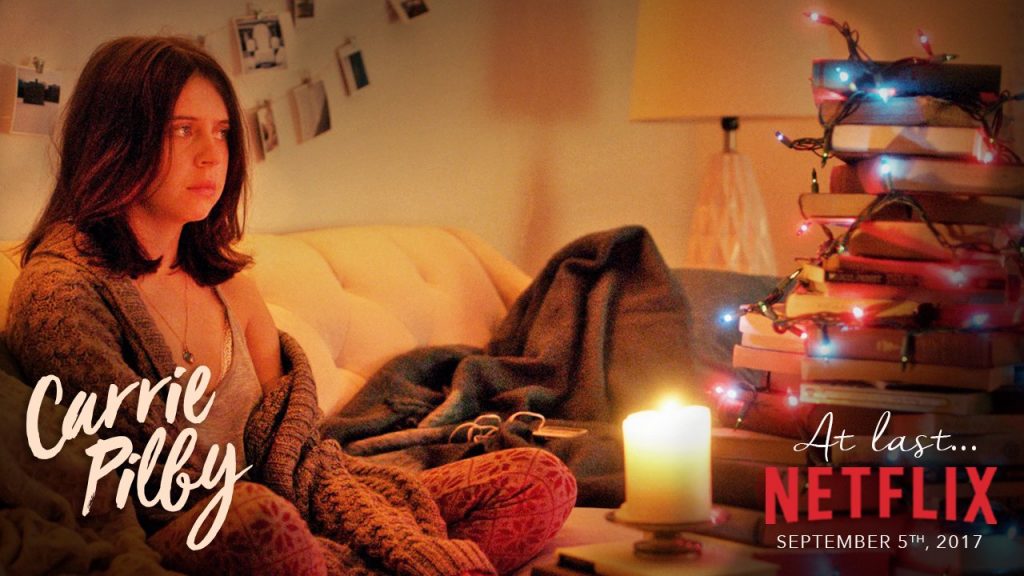 Gigi de Lugo runs Tropic Heat Studios and is one of the executive producers for Gabriel’s new film, An L. A. Minute. The film, starring Gabriel and Kiersey Clemons, completed shooting last spring and we have been waiting to hear more about it. Twitter is our friend in this regard: 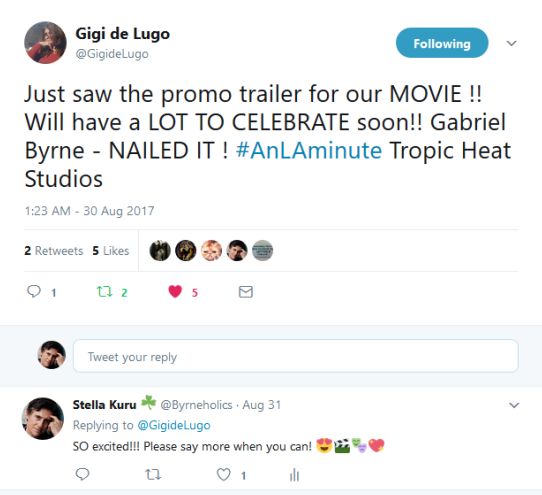 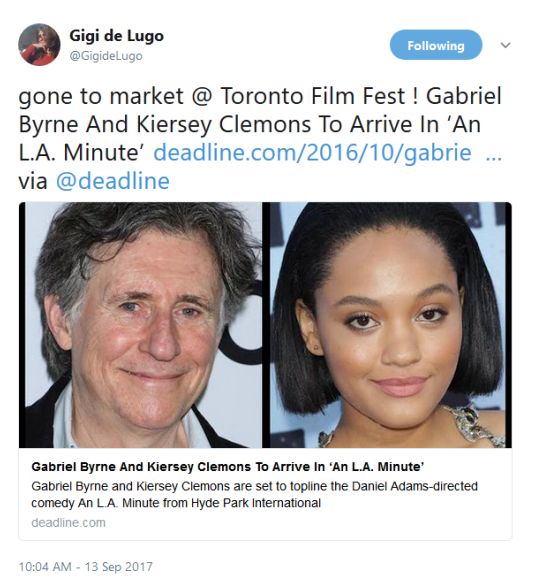 So! The film is going to be great, Gabriel nailed it, and now An L. A. Minute is being shopped for distribution at the Toronto International Film Festival, which just closed! Stay tuned for more news and that enticing trailer!

Here’s a promotional still for the film: 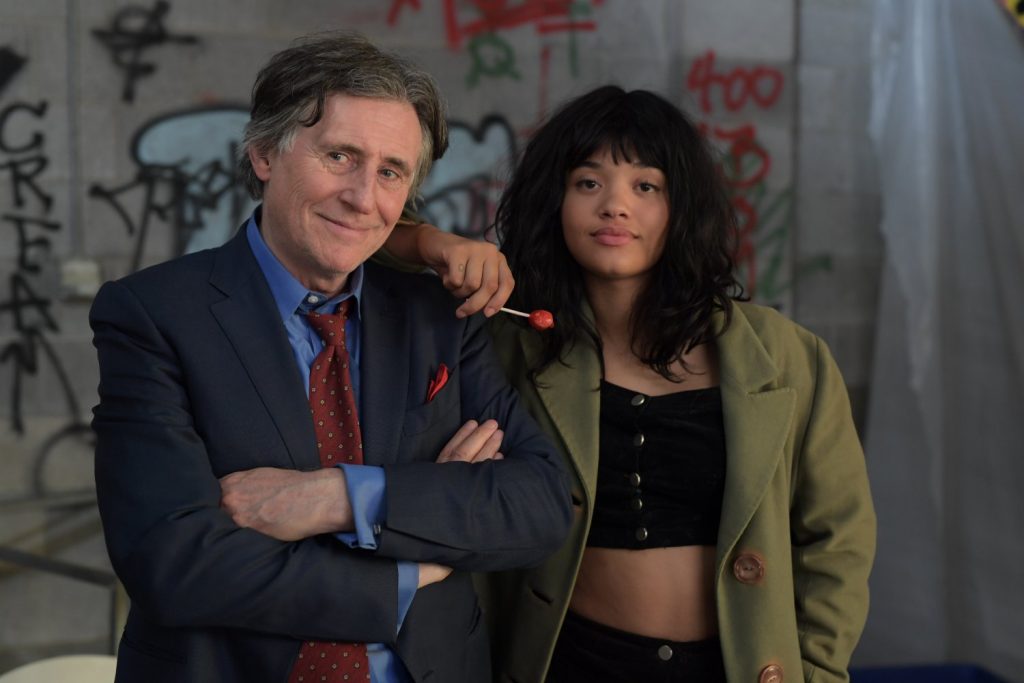 The writer Colum McCann will be talking with his friend and colleague, Gabriel Byrne, at Lannan Talks, in Santa Fe, New Mexico, on January 31, 2018.

What this entails we know not, but these two are great talkers, so it will be enlightening and informative, no doubt!

About the Lannan Foundation:

Lannan Foundation established its Literary Program in 1987 to support the creation of exceptional poetry and prose written originally in the English language, and to increase the audience for contemporary literature. Since 2001, we have also offered grant support for the publication and dissemination of works translated into English…

Get your tickets here and, if you attend, report back! 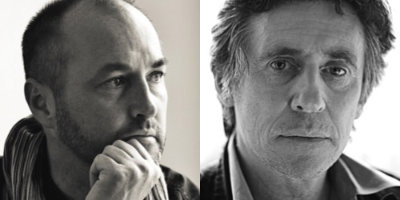 It has been a reasonably quiet summer, which is nice because my Internet connection has been wacky for ages! However, there IS news and it can be found on Twitter, my go-to source because, for some odd reason, Mr. Byrne never calls me up to tell me exactly where he is or what he is doing at any given moment. But Twitter comes to our rescue! wink 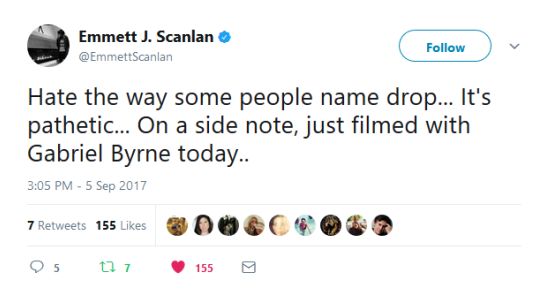 I asked him about the project, but he never got back to me. Sigh. We must wait patiently and all will be revealed. Someday.

September 7, Gabriel could be found at the San Carlo Restaurant in Manchester, UK, hanging out with this gentleman, Francesco Stoppa (I believe he runs the place): 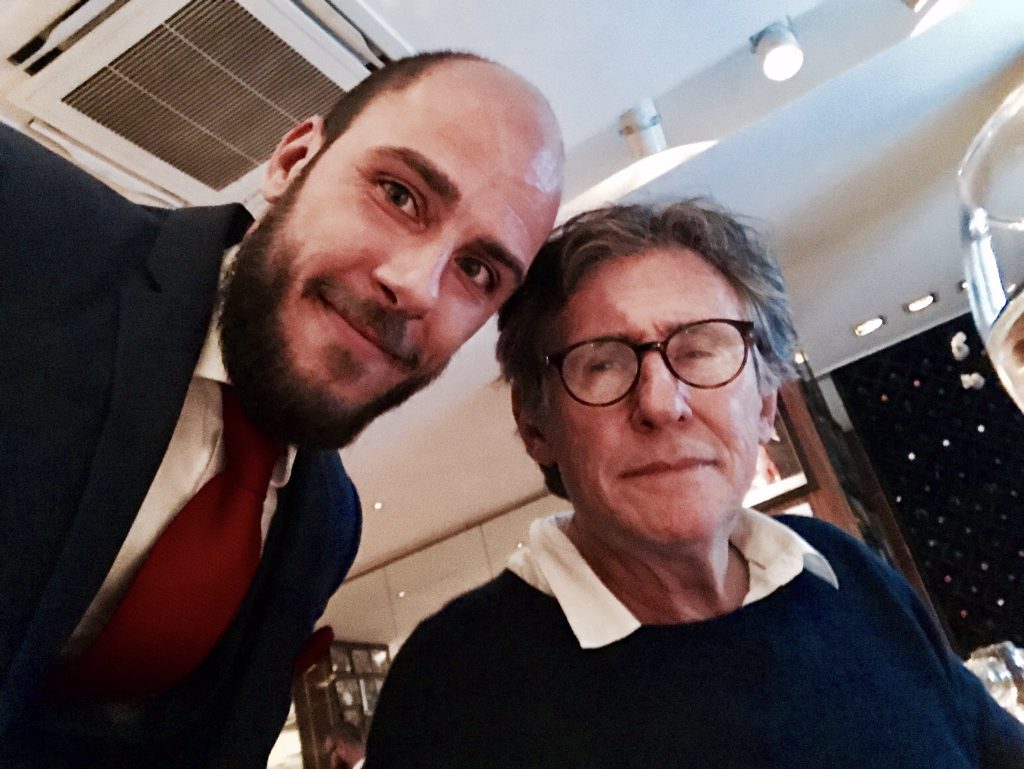 A slightly squinty selfie, but we are happy to have it!

The celluloid Gabriel popped up in Miller’s Crossing at the Irish Film Institute in Dublin on their Open Day, September 16. In honor of Tom Reagan’s appearance, writer John Maguire shared his stellar interview with Gabriel from 2008. Be sure to read it: it is that rare interview that illuminates new aspects of a person we think we know well. 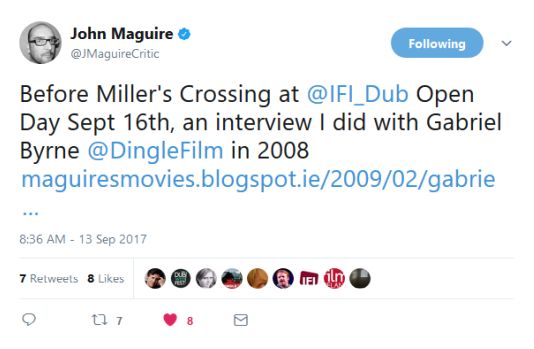 Finally, Elena tweets a nice shot of the portraits at the Shelbourne Hotel in Dublin: 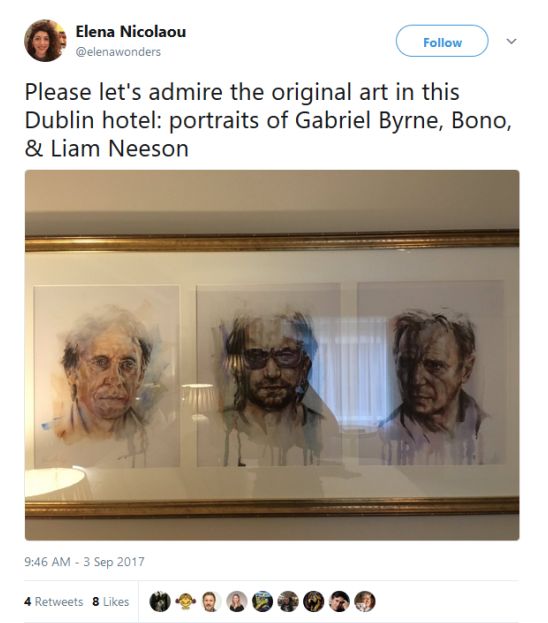 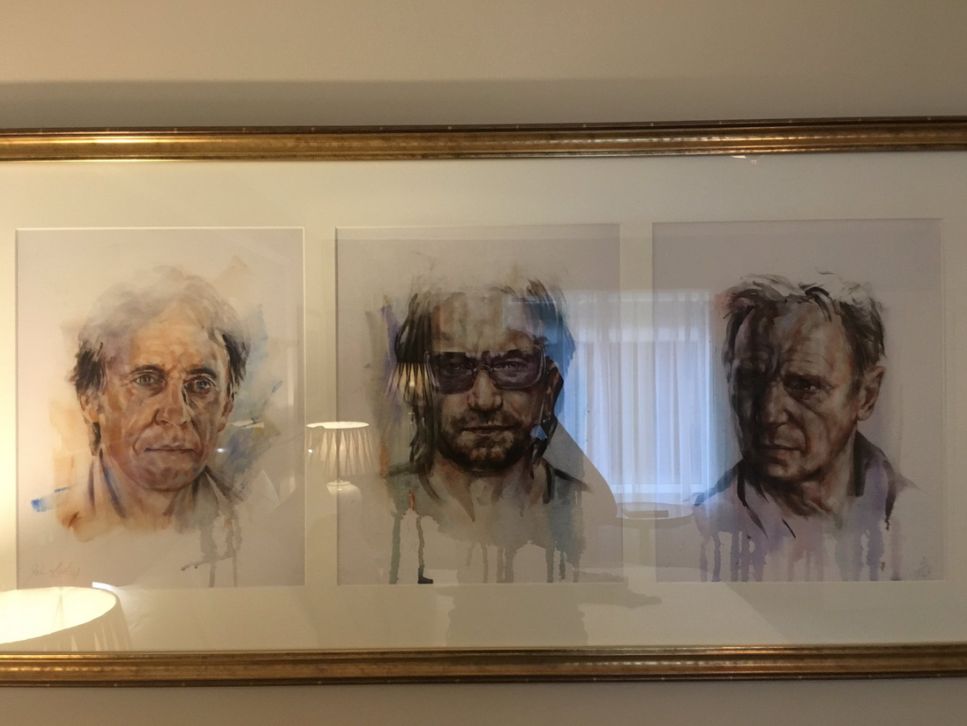 And the original of Gabriel, by Irish artist John Keating (and I’m reasonably sure he did the other two as well): 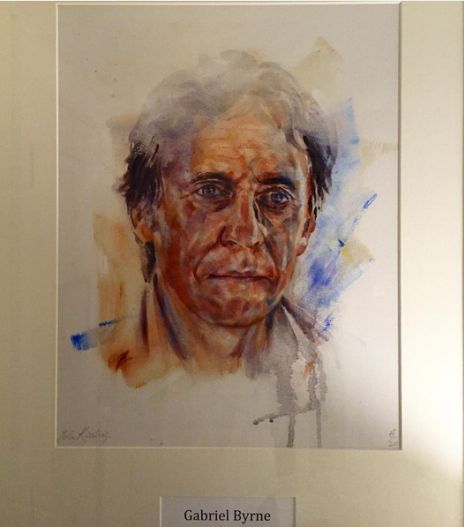 Keating’s technique provokes varied responses, but I find the basic structure absolutely sound and I enjoy the rough coloration. Not everyone’s cuppa tea, apparently, but count me happy. He captured Gabriel’s eyes, and that’s the main thing.

More news will be on the way soon, with completed films being released, new films starting production, and the Irish Arts Center Spirit of Ireland Gala in October. Happy Autumn to you and enjoy this Byrne-ing Fall Wallpaper! heart 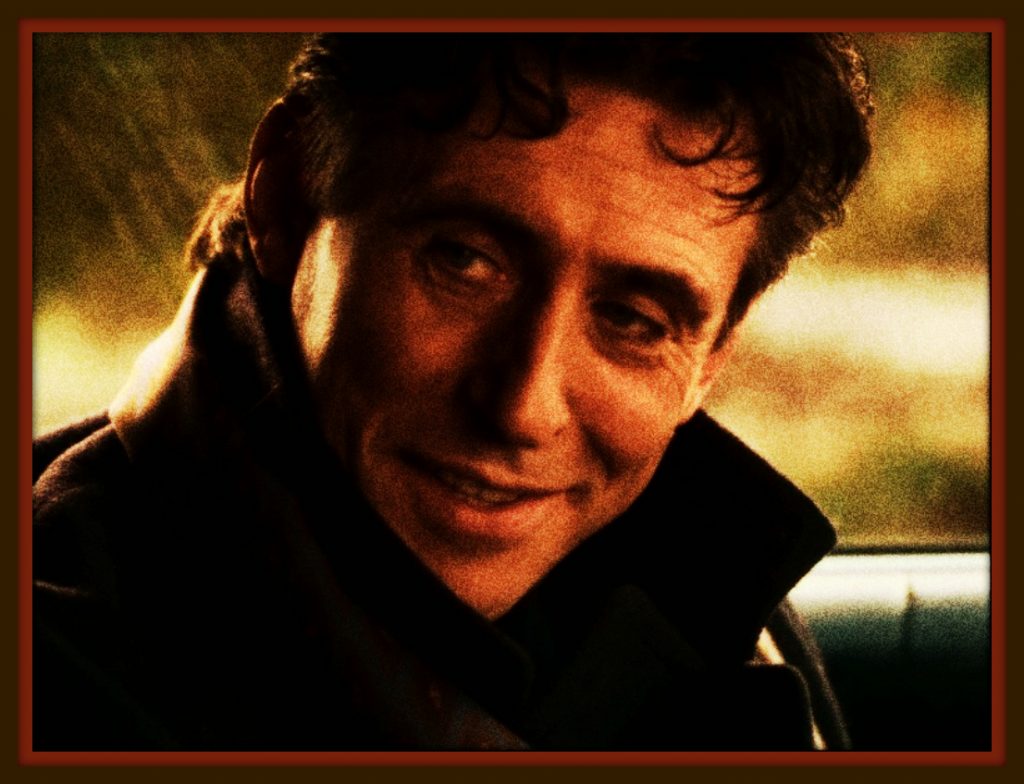