Gabriel Byrne at the IFTA Awards!

Gabriel Byrne was honored in his hometown of Dublin and oh, how we wish we could have been there! heart

He was visibly moved during his acceptance speech and it was obvious to all that this was a very special occasion for him. His emotion touched everyone, including those of us who can only watch from afar.

Below you will find a collection of quotes from this memorable evening, as well as tweets marking this event.

Twitter reported that “Gabriel Byrne” was trending Thursday evening and he continues to do so now. That’s quite an accolade in itself!

“It’s meaningful to me because it’s for a body of work”, he said. “But when I think about it, I think about the opportunities that I’ve had and how lucky I’ve been to be able to work abroad and have the choices to do various things.

“But more than that, to me, it’s about my life, the life that I’ve led. That’s more important to me. I look at the work and I say, ‘Yes that’s wonderful’ but it’s the life, and this makes you look back and say ‘Oh, if I hadn’t taken that first jump, where would I be now?’.”So I’m glad I took that jump even though it was scary at the time, I’m glad I did it.”

The Dubliner confessed he was more nervous to accept the Irish award that any international honour.

Gabriel said: “It’s lovely to be honoured abroad because you feel I’m Irish and it’s nice to be honoured as an Irishman there like the Golden Globes and the Emmys over there.

“But there’s something special about coming here because it’s the home crowd and it makes you more nervous than anything else.

“Here it’s like there’s a version of the neighbours are looking out the curtains at you. 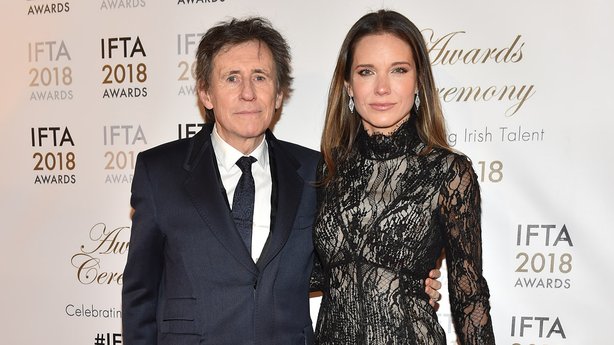 All eyes were on Gabriel Byrne as he arrived to receive his Lifetime Achievement Award in recognition of his distinguished, decades-long career in film and television.

Dublin-born Mr Byrne is one of the most recognised screen talents in Hollywood and has appeared in more than 75 feature films.

When asked how he was feeling about accepting the award tonight, Mr Byrne said, “I’m honoured, it’s really meaningful because it’s full circle for me.

“I used to deliver letters right across the street when I was working as an insurance messenger boy and to think I’d be here one day accepting an award from the President of Ireland wouldn’t have even occurred to me as a fantasy”.

Video from the red carpet (remember to enlarge to full screen!):

Gabriel Byrne shed a few tears as he accepted the Lifetime Achievement Award at the IFTAs on Thursday night.

The Vikings actor, 67, was honoured by President Michael D Higgins at the Mansion House in Dublin, who said it was an honour to call Byrne ‘one of our own’.

Byrne, who earlier walked the red carpet with his stunning wife Hannah Beth King, got emotional as fellow actors such as Brendan Gleeson, Toni Collette and Emily Watson paid tribute to him via video.

Visibly emotional as he took to the stage, Byrne said: ‘When you look back on the decisions that you’ve taken sometimes with great premeditation, sometimes on instinct, you get to a place where you look back and you see the reverberations on those decisions.

‘You look back at the successes, the failures, the doubts, the insecurities, the fears, the regrets, and the great gratitude that you have to have been given those things.

‘I’m enormously grateful for the opportunities that have been given — I’m really glad that I took them — because I was never encouraged to listen to the voice inside yourself that says “do it, go for it”… 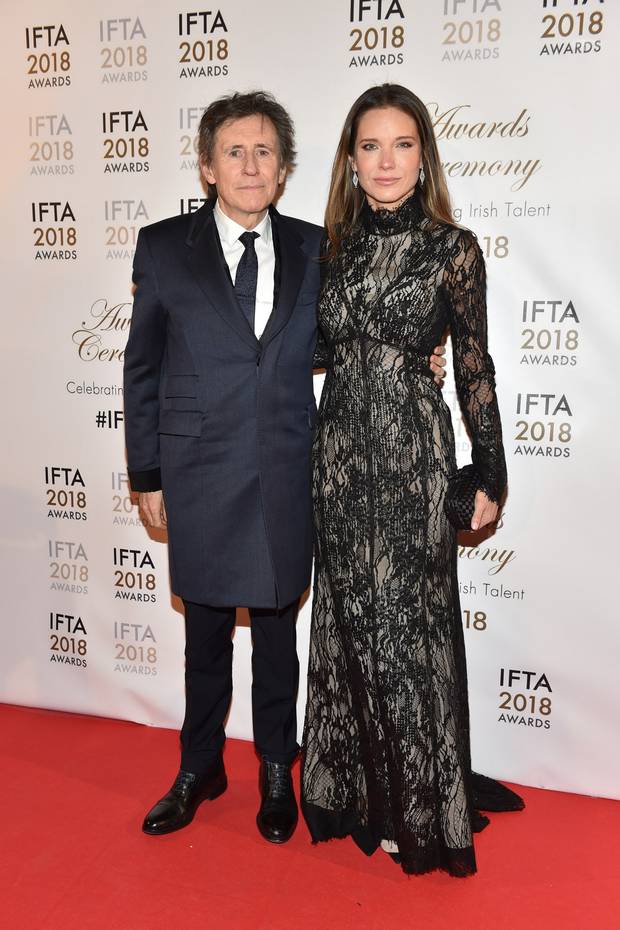 He also thanked his ‘darling, beautiful wife’, who looked on with tears in her eyes.

Before the ceremony, Byrne told Extra.ie: ‘It’s been a long journey … I can’t believe that starting off in Dublin with no expectation of anything and just taking one mad courageous journey, despite everybody else saying “don’t do that, it’s, crazy, don’t go to London.”

What an amazing night! Doesn’t get better than the front page of @IrishTimes with Gabriel Byrne & the President of ireland! #IFTA18 pic.twitter.com/kpoJ3c5Is1

You have read this far?! Good for you! Well, we both know that Gabriel would not allow an opportunity like receiving a Lifetime Achievement Award go by without talking about things that matter to him. So:

After transitioning from a conservative start in religion to the liberal industry of acting, he spoke strongly about his stance on the upcoming 8th amendment referendum.

“I believe that If you don’t own your own body and your own decision to do what you want with your own body, what do you really own?”

“I think that the Church and politicians should not be making decisions, moral decision about a persons intimate life.”

“That’s not to denigrate people who are pro-life… You can’t tell one group of people what they should be doing.”

When asked about what he thought of the current condition of the Irish film industry, Byrne told TheJournal.ie that Ireland faces many challenges.

“Ireland has the same battle that every small country has – because the dominant market is the American market. And it shouldn’t be but it is the test that the film, how it does in America, that’s where the money is, that’s where the rewards are. But you know if you’re a novelist you can sit at a table and you can tell your own story without interference from anybody else,” he said.

He described how believes this dependence on success in the US in turn affects the types of films that can be made by Irish people.

“We’re not in that position where we’re able to tell our own stories. We’re just not,” he said. “To finance them, and tell them we’re away from that…”

Byrne said that having a new Culture Minister – Josepha Madigan – is “a good thing”.

But he emphasised that he sees film as belonging not just at awards ceremonies, but in schools.

“We have to put it at the forefront, in schools, every child benefits hugely from drama because it gives creative expression to your inner self. It don’t think it’s treated seriously, to be honest.”

He said in his own speech at the IFTA awards that even though he didn’t know while younger what leaps he would take into the unknown, he was glad he took them.

“If there’s anybody out there who has that silent urging or voice, listen to it, do it, because the doing of it means that you won’t regret it – because it’s better to have done it than to never have done it,” he said.

There have always been lead Irish actors in Hollywood but Gabriel Byrne was the first from my era, with my accent I saw in a mainstream Hollywood pic. Tiny compared to the long wait PoC have had for #BlackPanther but gave me a small inkling of why #RepresentationMatters https://t.co/IqJVbQvKZM

Is this not the SWEETEST photo of Gabriel Byrne at the #IFTAs pic.twitter.com/Pp0JHyr4ed 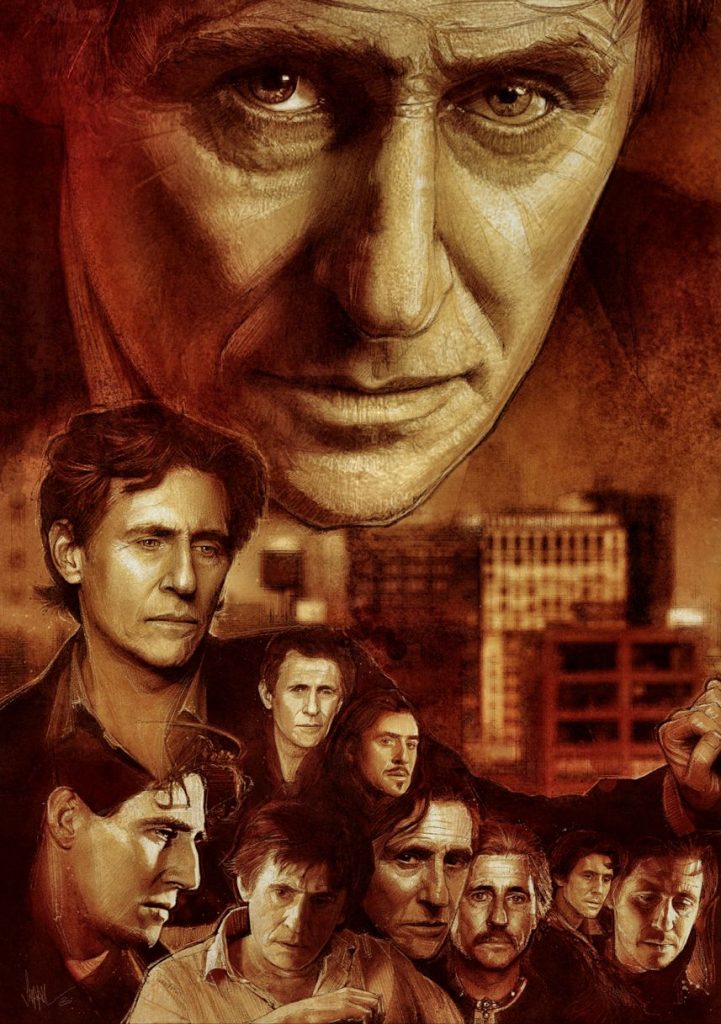 Heartfelt and sincere congratulations to Gabriel Byrne from his fans around the world. Byrneholics everywhere are so proud and happy for you! What a thrilling evening and what a lovely award. Kudos to you, Gabriel! heart