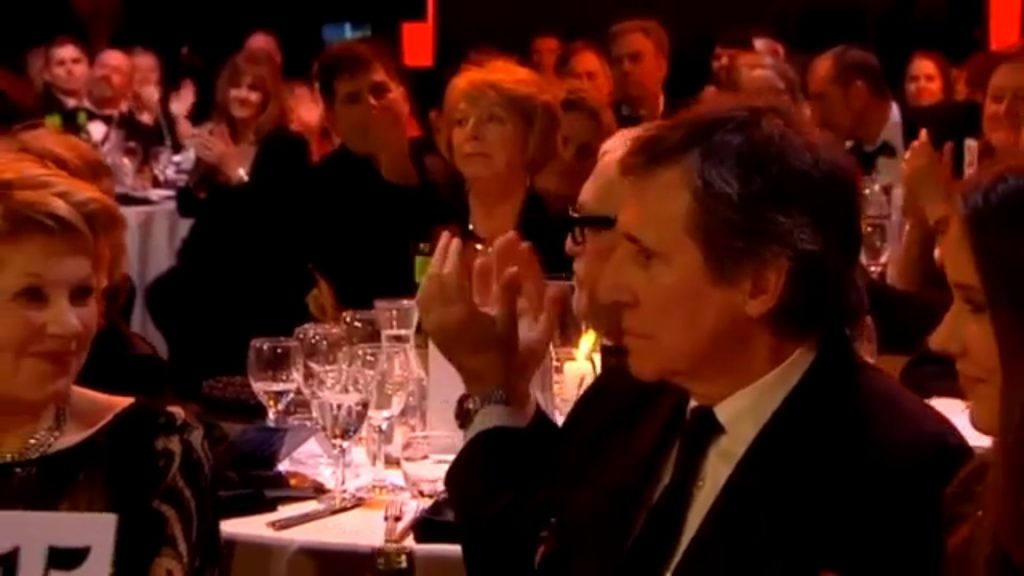 The Irish Film and Television Awards has made the entire presentation of Gabriel Byrne’s IFTA Lifetime Achievement Award, telecast on February 15, 2018, available on YouTube.

What a special night this was!

Here’s the video and below you will find a full transcript of remarks from both President Higgins and Gabriel Byrne. President Higgins is glowing in his praise of Gabriel, while the man of the hour is humble and somehow introspective in the face of this towering honor.

Enjoy it all and once again, congratulations to Gabriel on this wonderful award!

Presentation of the award by President Michael D. Higgins

May I commence by thanking IFTA for inviting me to present tonight’s ‘Lifetime Achievement Award’, and commending them for their valuable work in recognising and rewarding the many talented and creative people who contribute so much to Ireland’s reputation on the international stage.

Tonight I am delighted to have the opportunity to be associated with your acknowledgment of the work of an actor who has made an outstanding contribution to film and stage and has also been an outstanding ambassador for Ireland, not only through his gifted screen and stage performances, but also through his passionate advocacy for the Arts in all their forms.

Gabriel Byrne’s talents first came to the notice of the homes of Ireland through television. Sown in the fields and farmyards of the iconic Irish television drama ‘The Riordans’, from that rich soil his reputation grew and flourished. From a training in some of the great sources of talent, for example the Focus Theatre, Gabriel went on to significant roles in films such as ‘Defence of the Realm’, ‘Miller’s Crossing’ and ‘The Usual Suspects’ which established him as one of Ireland’s most successful and internationally respected actors.

“Gabriel Byrne’s spirit of transformative thinking, and the moral courage that drives it, extends beyond his film career.”

Gabriel’s great artistic range and the affective command he brings to every role, whether playing a morally corrupt anti-hero, a well-loved literary giant, a legendary King, an Irish traveller or any of the many roles to which he has brought his unique and distinctive talent, have made a significant contribution to Ireland’s legacy in the world of film.

Gabriel’s ability to fully embody his character, to push their limits, dig deeply into their emotions, explore their vulnerabilities has gifted us with performances that ring with authenticity and invite us to a truth that is emancipatory of feeling. He is an actor unafraid to experiment, to innovate as he challenges and provokes audiences whilst bringing them to new understandings of our human struggles.

Gabriel Byrne’s spirit of transformative thinking, and the moral courage that drives it, extends beyond his film career. I read a description once of Gabriel as someone who ‘agitates with a passion to take on oppressors of humanity and culture far and wide’. That is a very apt description of a man who has always been a brave and outspoken advocate for justice in its many forms; speaking out on behalf of the homeless and the impoverished, asking the difficult questions that are so often the necessary prelude to bringing about positive change and the creation of spaces of culture that can be shared by all.

Our paths have crossed most recently in the appreciation of Eugene O’Neill and George Bernard Shaw.

Irish culture is fortunate to have the privilege of being able to claim Gabriel Byrne as ‘one of our own’ and I take great personal pleasure in presenting him with this greatly deserved award tonight. 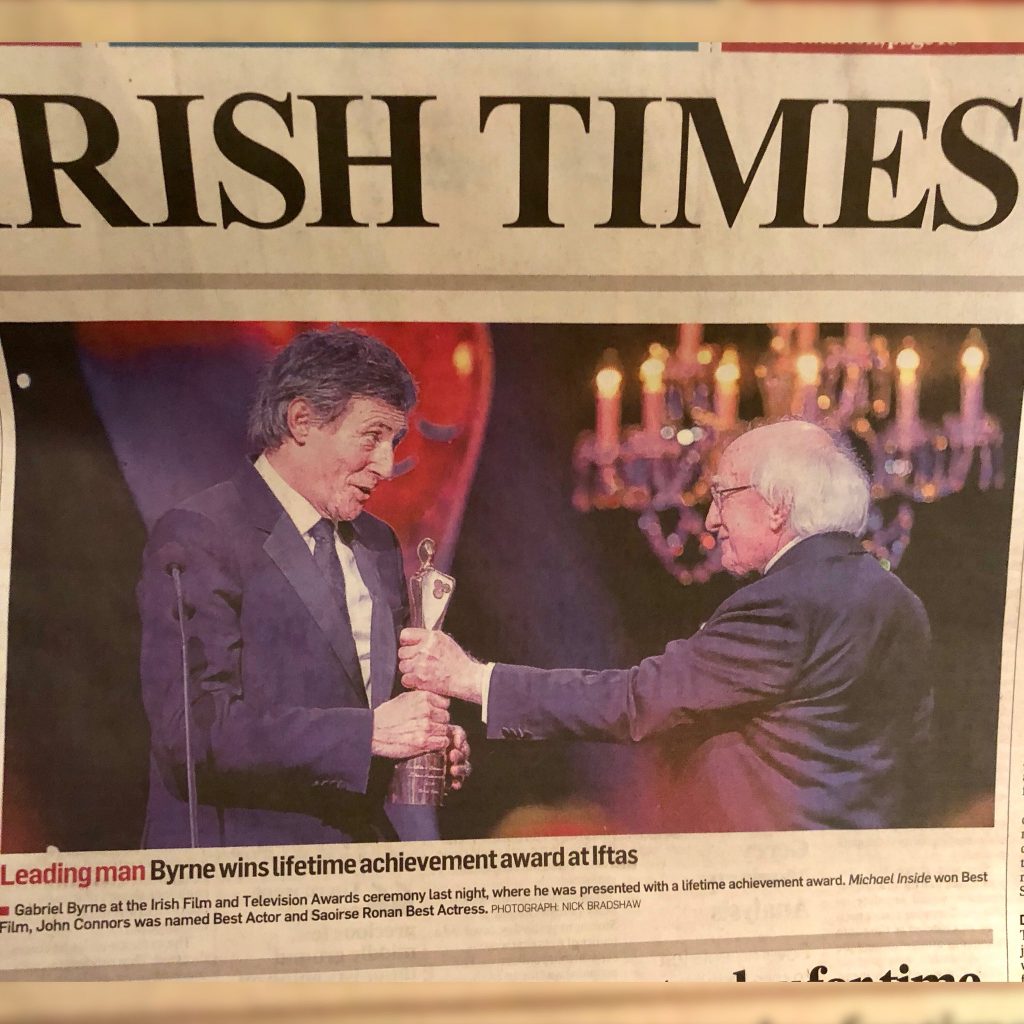 You know, this award is meaningful to me, because it’s not just a marker of work. It’s a marker of my life.

And when you look back on your life and the decisions that you’ve taken, you get to a place where you look back and you see the reverberations of those decisions. The decision to leave Dublin was a huge one for me, despite people saying “oh, you shouldn’t go to London, you shouldn’t go to New York” or whatever. And it wasn’t that I set out, saying, okay, well, I’m going to be… It was just that I had to prove something to myself, I suppose.

But there was a time when work and life were inextricably bound up together for me and I had to admit that, to a certain extent, my work was my identity. And I came to learn that life and work are two very different things. And imperceptibly they started to diverge. I came to see that life…work was a very important part of life but it wasn’t life. And when we consider the kind of lives we’ve led, you look back at the successes, the failures, the doubts, the insecurities, the fears, the regrets, and the great gratitude that you have to have been given all those things, including the failures–I’ve always maintained that you learn more from failure than you do from any kind of success.

“I remember talking to Liam Neeson about this. We were the only two in America. They didn’t know where we came from.”

I’m enormously grateful for the opportunities that I’ve been given and, even though I didn’t really understand the jumps that I was taking into the unknown, I’m really glad I took them, because I was never encouraged to listen to the silent voice, the voice inside yourself that says “Do it. Go for it.” And if there’s anybody out there who has that silent urging voice, listen to it, do it, because the doing of it means that you won’t regret it, because it’s better to have done it than never to have done it.

I’d like to also pay tribute to another part of my life that has been so important–the loyalty of friends, the loyalty of family, the people who know me, who I owe a great deal to, the people who gave me jobs, the people who believed in something that I had to say. My agent, Teri Hayden, I’ve had for maybe thirty years and we’ve managed to remain friends. Thank you to all those brilliant actors in the room, those young actors coming up now. It’s so moving to see it. I remember talking to Liam Neeson about this. We were the only two in America. They didn’t know where we came from. It’s wonderful to see now that kids can look and say “I’m going to L. A. or I’m going to London,” and actually going for it, being courageous and taking the leap. You don’t really learn anything–you just keep making mistakes and you try to do it better the next time. Every job you start, you start at the bottom.

I’d also like to thank, on a personal level, my darling beautiful wife, Hannah Beth. Thank you. 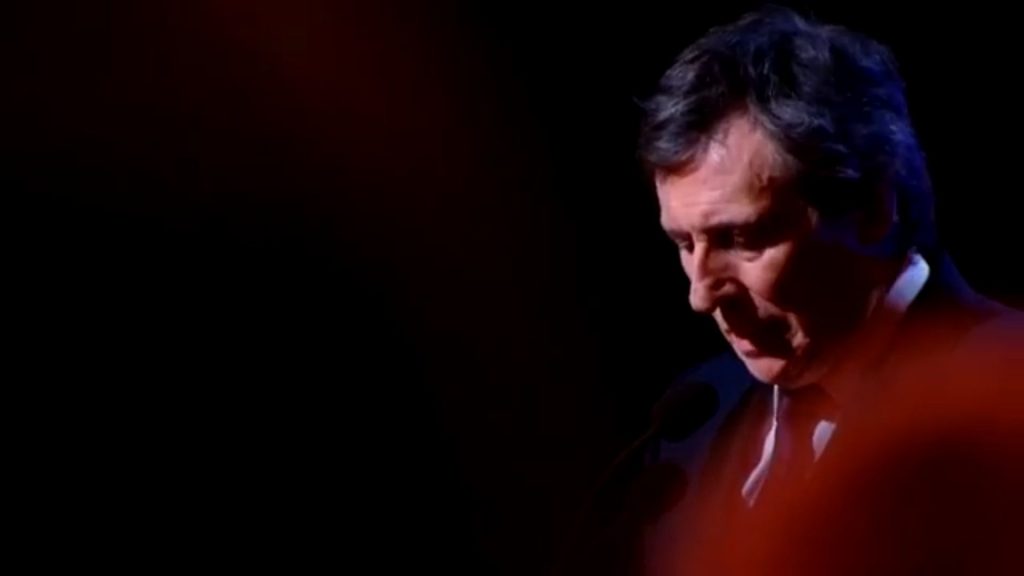