Sunday, June 17 is Father’s Day in the USA, so it seems only fitting that we recognize a wonderful, if somewhat doomed, father played by Gabriel Byrne in his latest film, Hereditary.

Long-time Byrneholic and Gabriel fan Angelle, who lives in Canada, had an opportunity to see Hereditary on the big screen. Brave woman! She offers her review here and we thank her for it! heart

Hereditary: A Fan Review by Angelle

This is about a horror show.

No, not the Trumpian horrors on the nightly news, rather a terrifying journey into the macabre. Did I mention it’s also a family drama? It’s that too, only it’s a shame there’s not more drama. I’m showing my bias for character-driven stories here. Ari Aster, the director of Hereditary, said in an interview that the film was originally 3 hours long and some of the character development inevitably got left on the cutting room floor. Because well, film producers are not interested in family drama. Too bad. We might have cared more for this peculiar, doomed family if we got to know them better.

But with Toni Collette and Gabriel Byrne playing the stricken parents, I just had to see it on the big screen. These talented actors are no strangers to the horror genre, with Collette known for her memorable role in The Sixth Sense and Byrne starring in many horror films beginning in the 1980’s with Ken Russell’s weirdly wonderful Gothic, The Keep, millennial angst films Stigmata and End of Days, and Ghost Ship.

Toni Collette gets the role of a lifetime in Hereditary, chewing up the scenery all the way through the film. She is riveting in her physicality and carries the film. Mr. Byrne has the thankless job of being a foil to Ms. Collette’s histrionic mother. There’s not a whole lot for Byrne to work with (I suspect his arc was what was left out of the final cut) but he imbues his character with genuine compassion and we feel for him and with him as he tries to mediate the escalating conflict between son Peter (played by Alex Wolff, who portrayed Byrne’s tv son in In Treatment) and his mother. I felt a chemistry between father and son that was lacking between husband and wife. 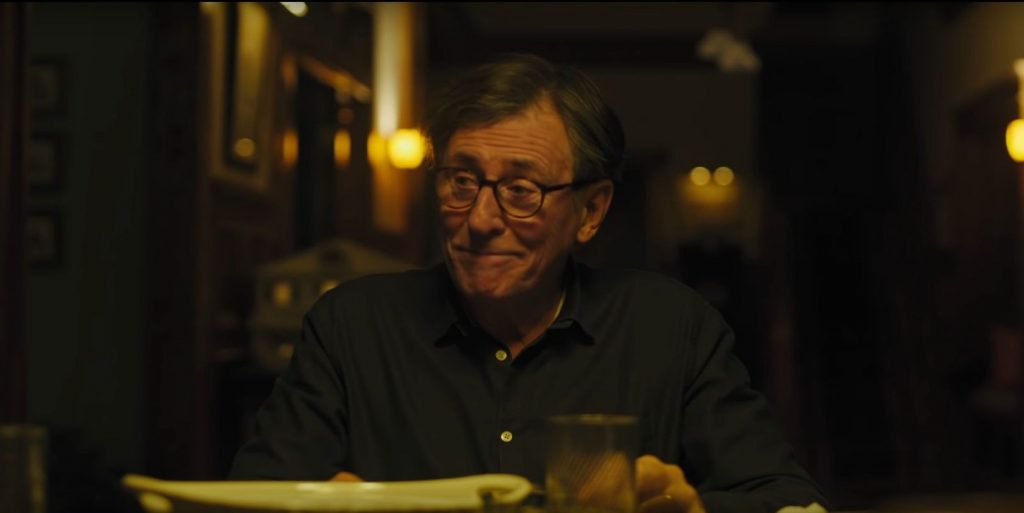 Gabriel Byrne is, like Gene Hackman, compelling in his stillness. He brings a calmness and empathy to his father figure. In contrast, Collette plays an emotionally stunted mother who cannot grieve her own mother’s death and admits to unspeakable acts she almost committed towards her children while sleepwalking. In her almost violent acrimony, Ms. Collette’s character is gangly and masculine, while Mr. Byrne plays the patient, feminine, nurturing constant in all their lives. He even makes a meal and delivers his son’s suit just in case we missed the role reversal.

With all the mayhem going on around the family, he is the anchor. But it all becomes too much for him to endure. We sense his torment, and Byrne breaks down in a truly heartbreaking scene midway in the film as he succumbs to his grief, alone and helpless.

I’ve tried to avoid spoilers. The film is best seen without knowing too much, so avoid the reviews (but not this one). You want to feel the sense of dread and fear conveyed through the characters and enhanced by the droning score and superb cinematography. And, wait for it: there is gore.

I saw the film on a beautiful warm Sunday afternoon and the cinema was almost empty. Apparently, the critics love it more than audiences.