Like Mr. Byrne here, I have been thinking about this film a lot, hoping to see it sometime soon, and wondering how people will respond to it, to the story, to the actors. To the scariness!

There has been a very, shall we say, DIVERSE array of opinions expressed on Twitter since Hereditary opened in US theaters on June 8. Some film-goers love it; some despise it. Some, oddly enough, want to share phone videos of their impromptu responses, as well as their immediate and critically important reviews. The Hereditary timeline is full of people’s telescoped faces, looking tired and frazzled, talking about this film.

Well, that’s very nice, but I think this film needs professional help. smile Here are the reviews from some of the critics I trust. They have tried to avoid spoilers, and so have I.

I share these reviews with you, in the hope that you will get a good idea of what this film is all about and perhaps even decide to see it!

(Dowd tweeted the very first response to Hereditary I read after it screened at Sundance Film Festival in January. He was so enthusiastic, amazed, and thrilled! He got a lot of people talking about the film then…)

Of all the blood-curdling images conjured up by Hereditary, the most traumatically terrifying new horror movie in ages, one sticks out as particularly definitive: Toni Collette, face twisted into a grotesque grimace of fear, staring off screen at a ghastly something we’ll soon have the bad luck of laying eyes on too. Her recurring expression of fright and pain is more than just a perfect mirror, reflecting back the audience’s own mounting distress. It also captures, in shuddery microcosm, the tactics of this relentless, ingenious shocker, the way it builds its haunted house on a foundation of raw and ugly emotion. The real horror—a tempest of unspoken, unspeakable feeling—lurks behind the safer, faker kind, enhancing every macabre funhouse moment. 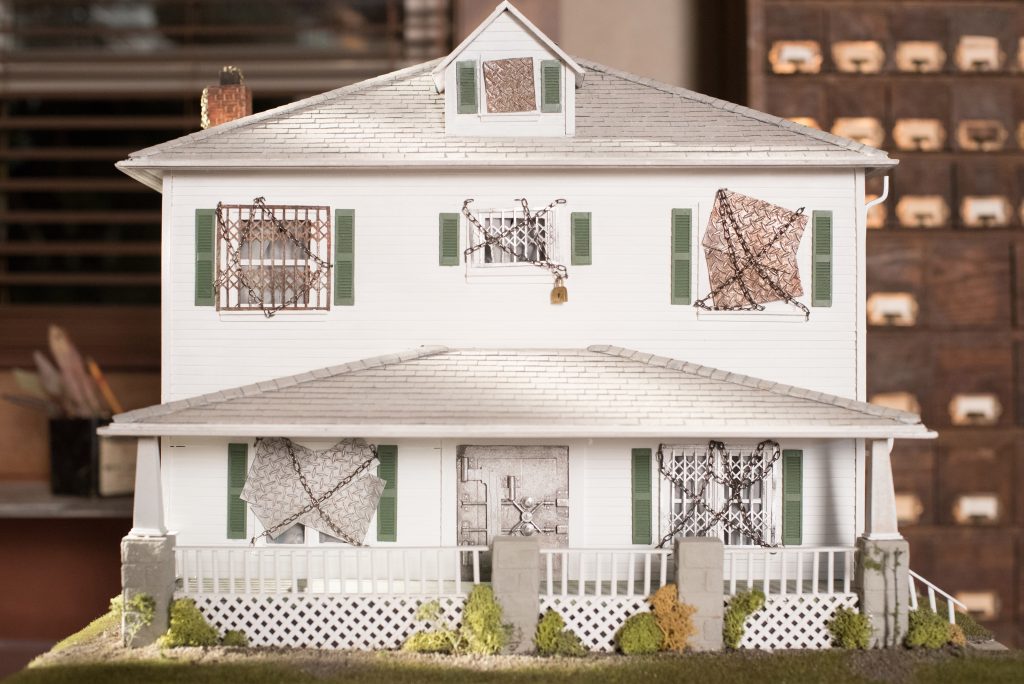 One of the many miniatures used throughout the film

The movie builds like a gathering storm. You’ll be hearing the score by saxophonist Colin Stetson in your nightmares, where the visual effects of makeup-and-prosthetics master Steve Newburn also work their dark magic. Still, Hereditary achieves its tightest hold on us, not through gore but through the violence of the mind. It gives us real people to contemplate, not the cardboard cutouts hack directors use for cheap scares. Aster hints that family dysfunction (does Annie hate her children?) and a long history of mental instability can be more dangerous than any possession a demon can manage. The look on Peter’s face near the end – Wolff is just tremendous in the role – will make you jump out of your seat. 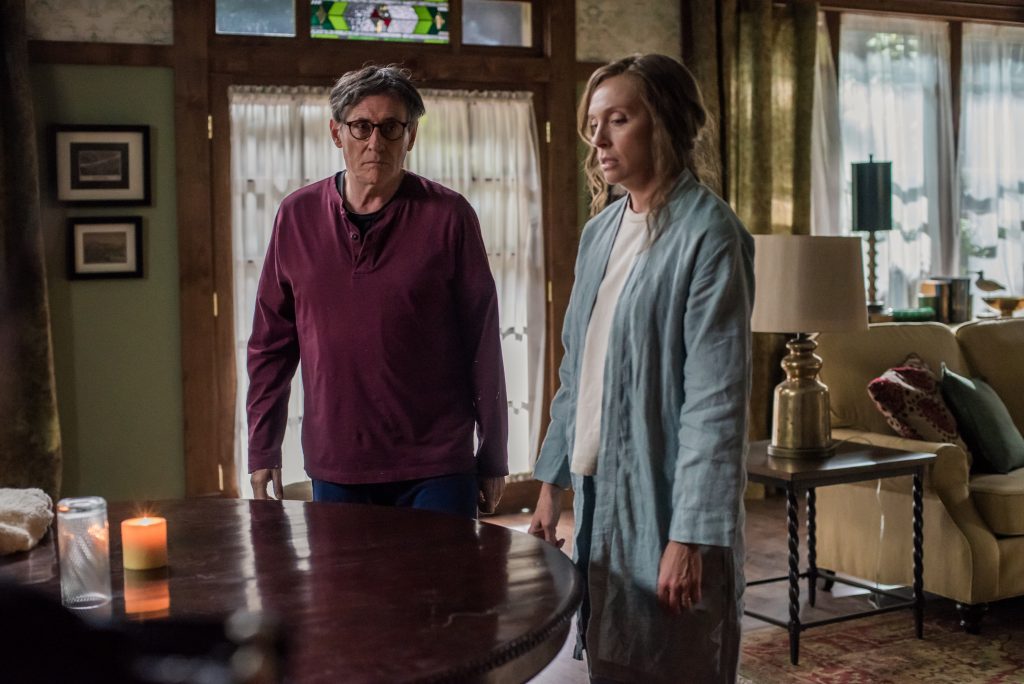 Hereditary tripled my heart rate, prickle-massaged my scalp, cured my hiccups – and pretty much terrified me. It was the first time I’ve heard someone in an audience of hardened critics yelp the word “Fu-uck” in two separate syllables; the first in fear, the second in a kind of immediate, incredulous self-reproach for having lost it in public. That reaction was incidentally triggered – the only appropriate word – by a tongue-click, the sound a child might make to impersonate the clip-clopping of a horse, a once-innocent tic I will from now on associate with pure evil…

It is customary to validate horror by looking for the satire, and of course Hereditary is partly about a secret fear and loathing of old people that flowers in middle age: fear of becoming old, fear of the genetic message of weakness they have left us, about which we can do nothing, strive for success as we may. But Hereditary is basically a brilliant machine for scaring us, and Collette’s operatic, hypnotic performance seals the deal every second she’s on the screen – though Wolff is also very good as the cool teen who regresses into a frightened little boy. Collette’s Annie turns into a poltergeist haunting herself: thrashing and contorting with agony, with her anguished but rational need to keep it together, and keep her family together. 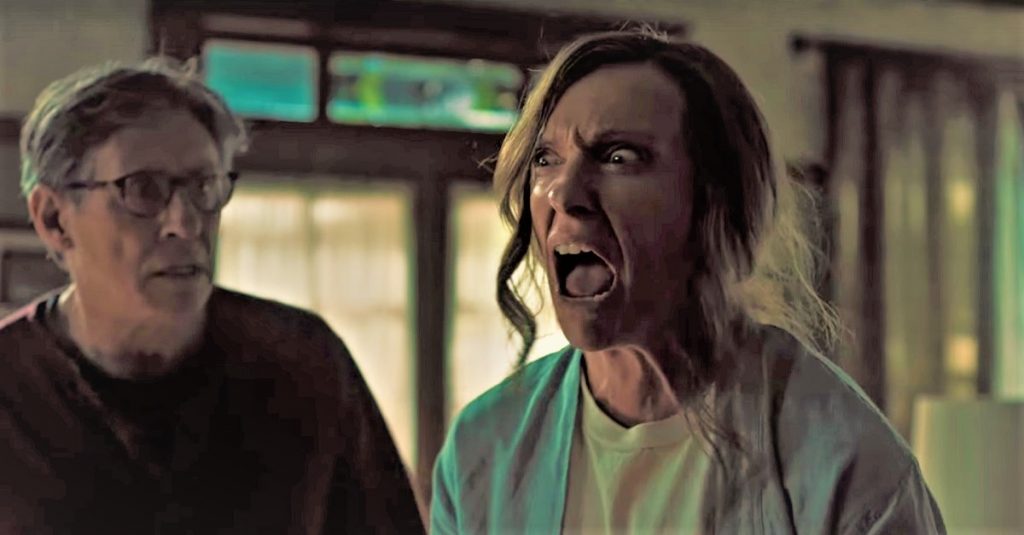 This is a horror because it’s genuinely horrifying.

It’s a film characterised by actual carnage and, pleasingly for genre fans, it’s rooted firmly in several very fine horror traditions. We won’t spoil things by naming them all – for once, literally anything constitutes a major plot spoiler in this twisty, surprising enterprise – but it begins in Don’t Look Now territory before going somewhere crazier still…

Shapes zip by in the peripherals. A flitting glare could be an apparition or a trick of the fading light. The avant-garde saxophonist Colin Stetson provides an ingenious, sneaking score – here it throbs; there it squeals – that does as much to point up potential menace as does Pawel Pogorzelski’s probing camera, with shots that echo the voyeurism required by Annie’s miniature recreations of her own life.

Long before the plot takes an explicit dive into the supernatural an atmosphere of non-specific dread has been established.

Nicholas Roeg’s Don’t Look Now is one of my favorite shocking films–a family drama that centers on death, loss, and miscommunication. So now I’m intrigued about Hereditary! 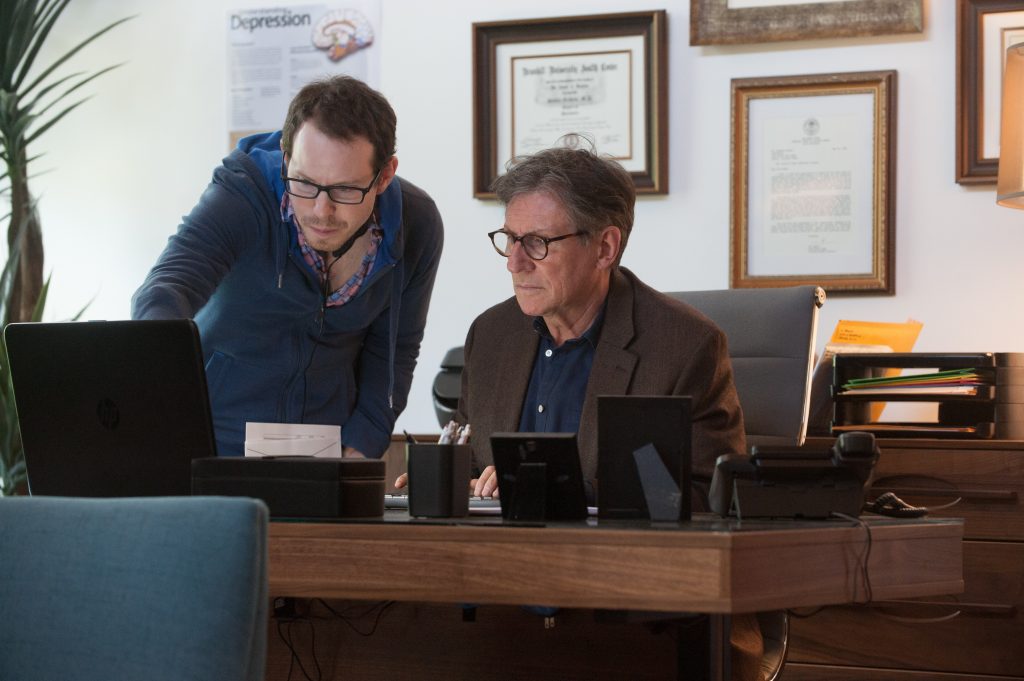 Truthfully, when the credits rolled I wasn’t sure how I was going to score Hereditary. It is an excellent film with some fantastic performances and excellent direction, but at that moment I didn’t feel like it had blown me away. There are some minor quibbles to be had. There is an awkward attempt at an explanation before shit really hits the fan and the plot is a bit convoluted, but it’s been three days since the screening and I can’t get the damn thing out of my head. Images from the film frequently pop up in my mind. I can’t stop hearing one particular sound effect from the final act (you’ll know it when you hear it). I’m seeing things in the shadows. I didn’t think the film had scared me, but I was very, very wrong. Hereditary will stick with you long after you’ve left the theater. You will want to talk about it. You will want to see it again (I most certainly do). It is a film that will no doubt reward the viewer on repeat viewings, that is if you can stomach it. 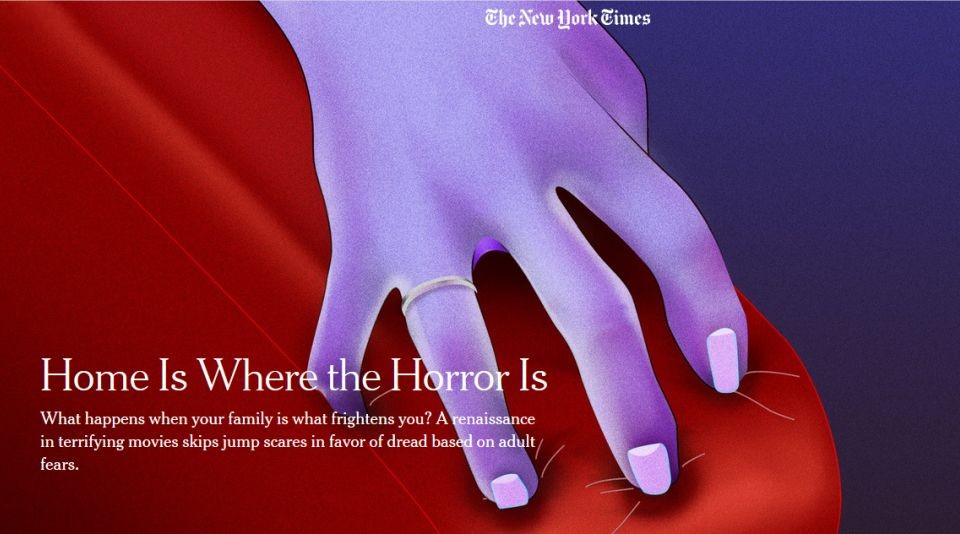 Hereditary promo art is so dark. This bright horror from NYTimes is kind of refreshing, isn’t it?

In “Hereditary,” bugs crawl from decapitated heads, ghosts lurk in the shadows and an artist tries to communicate with the dead. But the most jarring moment of this terrifying new movie might be when Annie, a mother played by Toni Collette, tells her son she never wanted to have him and tried to induce a miscarriage. Then she wakes from this nightmare, unsettled by the thoughts rattling in her subconscious. Parental guilt is the real monster here.

None of these movies are sequels or remakes, and most of them come from the singular perspective of writer-directors pursuing their vision, not a studio pumping out product. They feature the usual preoccupations of horror — supernatural evil, gore, creepy basements — but they also evoke the poet Anne Carson’s answer to the question, Why does tragedy exist? “Because you are full of rage. Why are you full of rage? Because you are full of grief.” 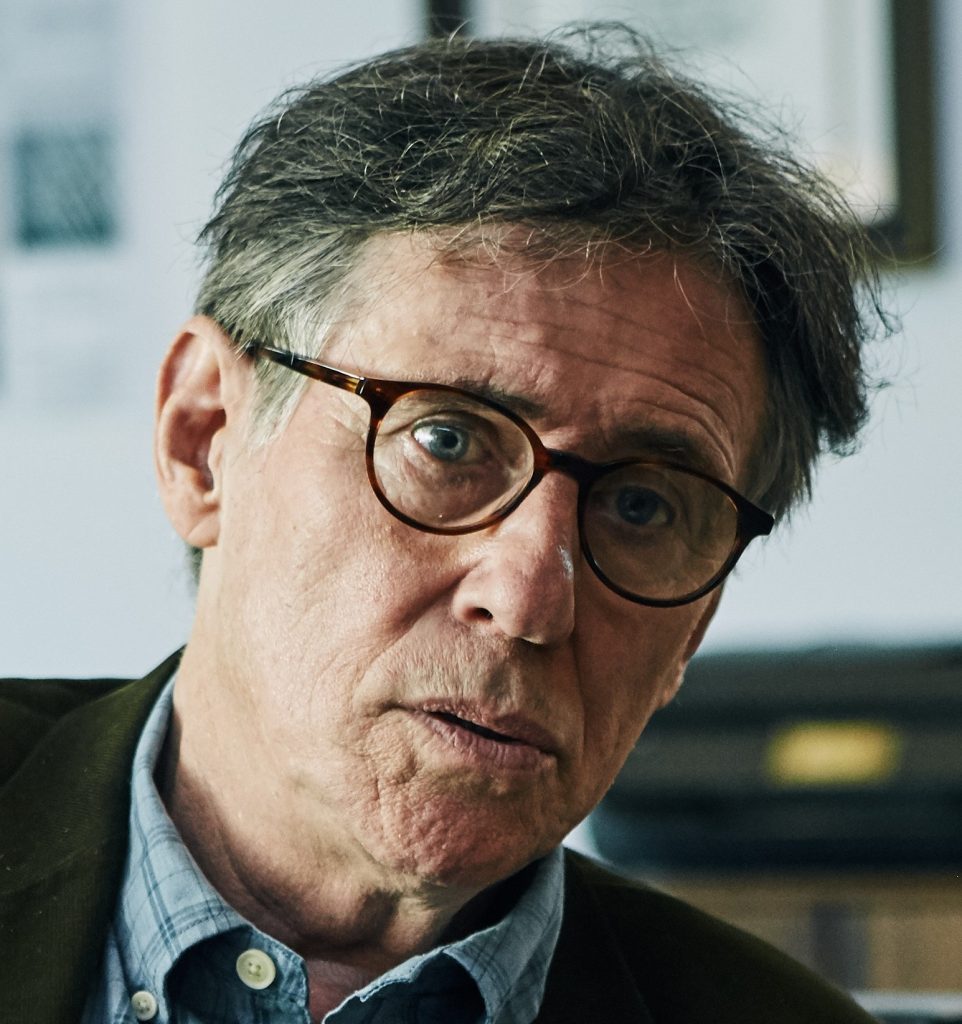 Where is Dr. Paul Weston when you really need him?!

“Hereditary,” opening June 8, is the apotheosis of this trend, a visually ambitious and ruthlessly disturbing supernatural story that is also an intricate meditation on mourning. It begins with a family late for the funeral of its matriarch. Everyone appears dry-eyed if not indifferent about the passing, the first sign something is off. After delivering a halfhearted eulogy for her mother, Annie asks her husband (played with grave unease by Gabriel Byrne): “Should I be sadder?”

Something seems inexorable about the miseries that befall this family. Annie is an artist who creates tableaux in miniature houses, which the camera lingers on, at one point segueing seamlessly into a scene of the real house. The implication is clear: These people are minor players in a drama they have little control over. Children are familiar with this kind of helplessness, but this movie suggests that adults have just as little agency, and works on the fear that has set off so many midlife crises: the sense you are turning into your parents.

And That’s Enough of That

If these reviews did their job, you are now grabbing your hat and heading out the front door to see this movie! Time’s a-wasting, as we say in Texas. But be sure to leave the lights on. Coming home to a dark house is probably not a good idea… 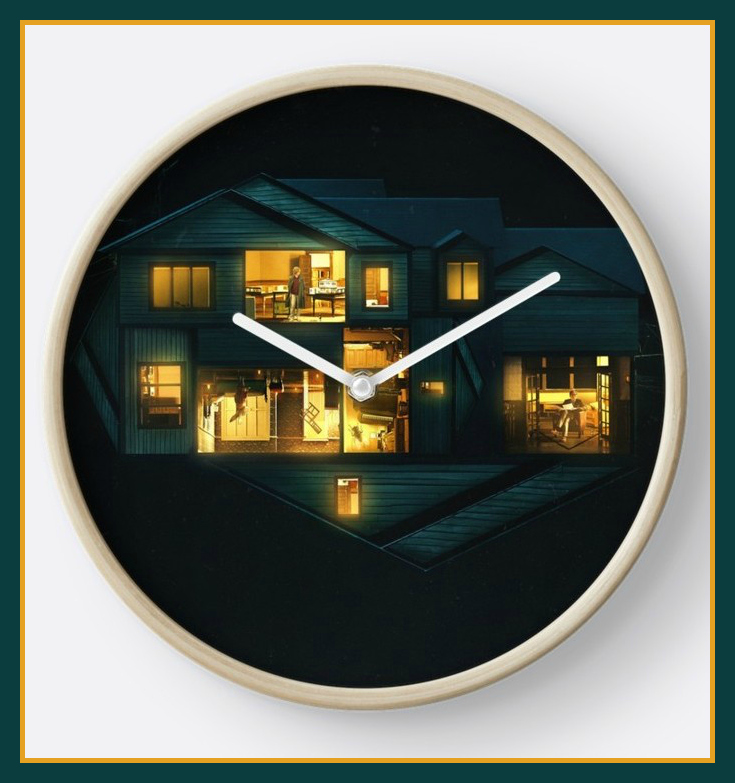 Thanks to Elf for sharing some reviews with me! heart