Happy Spring! Here is more Byrne-ing News for you: mostly updates on film projects, with a few special items, too. Read to the end for a late-breaking treat. You won’t be sorry! wink

Into The Night: Portraits of Life and Death premiered on PBS in America on March 26!

If you missed it, fear not. International and other rights are being negotiated now and the film should be available for viewing at a later time. Stay tuned for news about this!

Aysha Kahn’s article for Sojourners on director Helen Whitney is full of insight and puts valuable context around the making of the documentary film, so give it a read:

That’s what Whitney hopes her viewers will take away: the urge to act, to speak, before they no longer can.

“Knowing that we’re going to die, ask those questions now — not when it’s too late,” Whitney said. “I hope people won’t be scared of this film, but instead be reassured by it.” 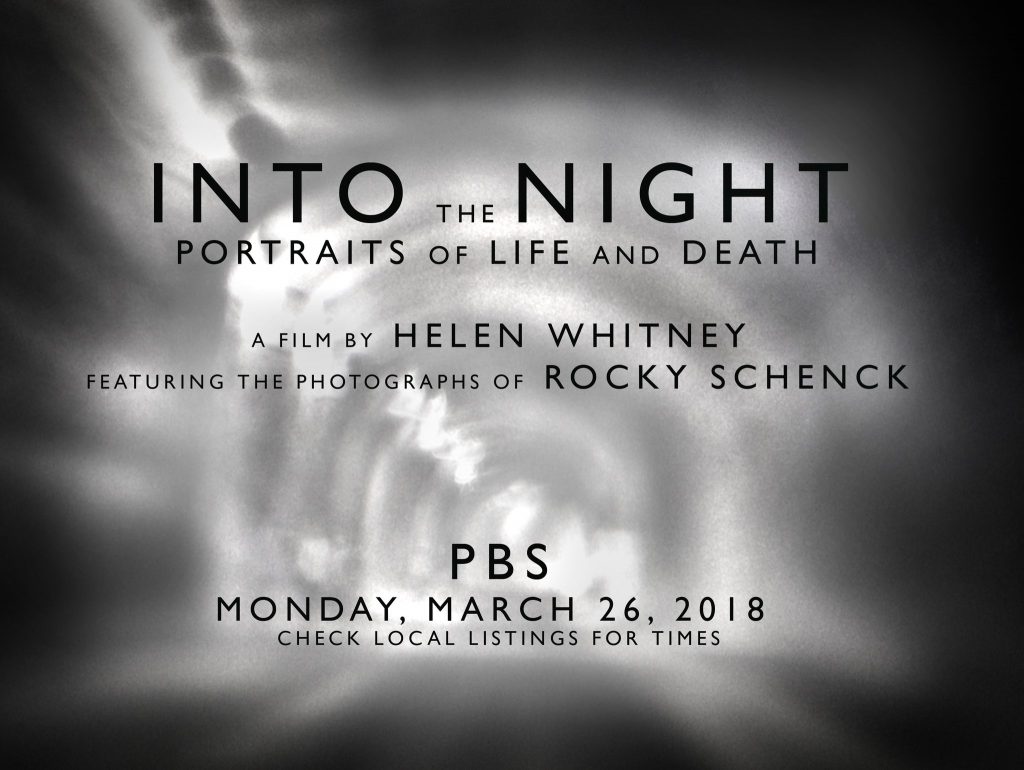 Now streaming on Amazon and Amazon UK, this documentary is directed by Dierdre Brennan and narrated by Gabriel Byrne, one example of his continued commitment to raising awareness about climate change.

From an Amazon reviewer:

A riveting documentary that follows scientists across the North Atlantic as they try to solve the mystery of why the wild Atlantic Salmon is on the verge of going extinct. With amazing underwater photography, Deirdre Brennan takes us from the Bay of Fundy in Northern Canada to Ireland, Scotland, Iceland and Greenland to see the work of scientists at every stage of the salmon’s life cycle. But they’re dying at sea, on their long, epic migration to their summer Arctic feeding grounds. The mystery is complex, but not surprisingly, climate change is one undeniable cause – and that is the film’s great strength: The careful building of scientific evidence that global warming is killing the wild Atlantic salmon. 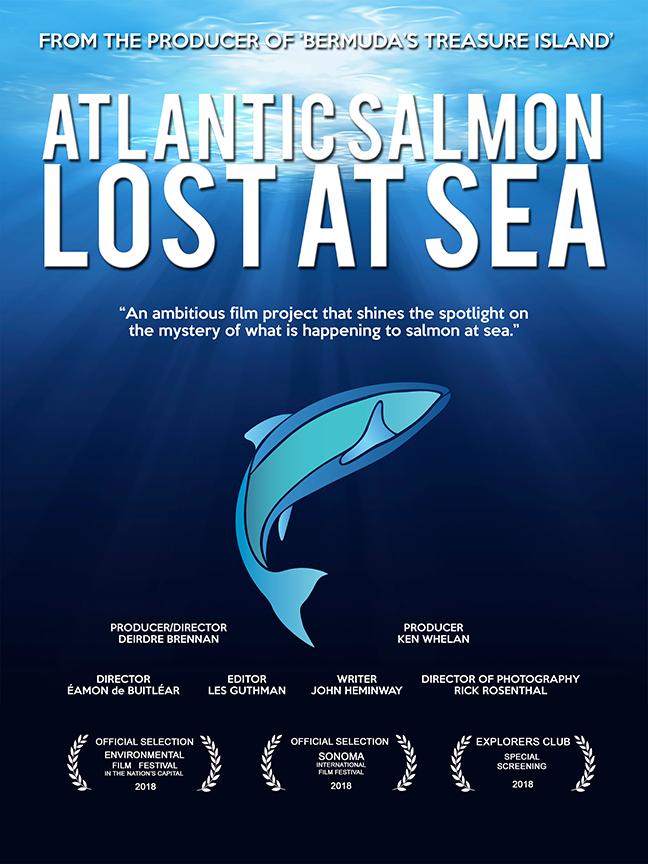 Lies We Tell is out on DVD and streaming at Amazon and other places, too.

Mad To Be Normal is out on DVD and streaming at Amazon and other places, too.

Angelle reminds us that Leonard Cohen has a book with a title very much like that of Gabriel’s new film, Death of a Ladies’ Man, which begins filming in Montreal and Ireland this summer.

From the New York Times review of Death of a Lady’s Man:

A collection of poetry and prose interspersed with lyrics, discursive passages, and diary extracts from the legendary Canadian songwriter-poet. First published in 1978, the theme of this insightful and moving poetry collection is love with all its dilemmas. It is largely autobiographical in tone, offering the reader insights into Cohen’s private world.

And she notes: “We know the album influenced Matt Bissonnette who is directing. I wonder if the book did as well?” 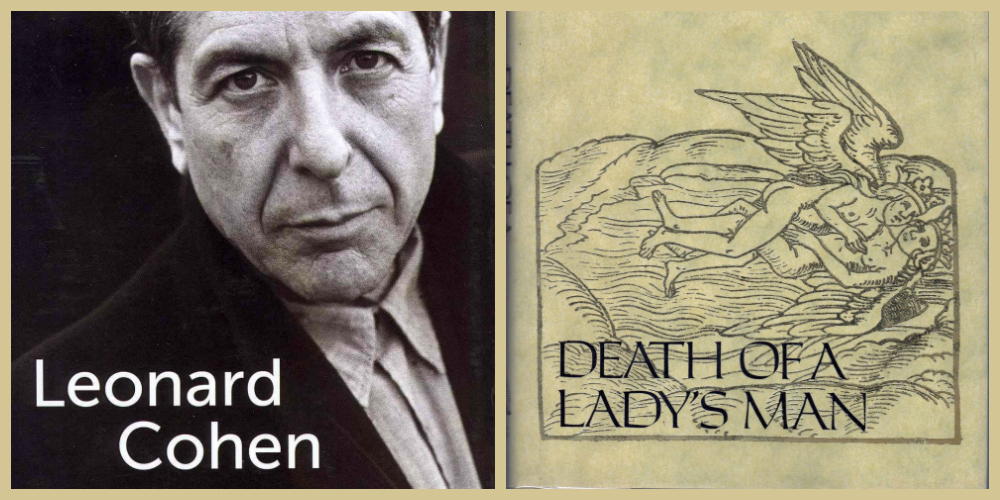 After a long period of hesitation, during which the book was several times withdrawn from publication, this version presents a series of poems and prose-poems, almost all of which are doubled by “commentary” poems of the same title. It is this doubling structure of the commentaries (many of which adopt a strongly adversary role vis-a-vis their “originals”) which provides the fascination of the book: Cohen finds a form which perfectly embodies all the contradictions, self-divisions, ironies, and productive ambiguities of his poetic persona.

The book is out of print, but there are used copies floating about, so visit your favorite used book store and see if you can find it!

It is always lovely to see one of Gabriel’s iconic films get the critical treatment years later. Does the film hold up? Was it a temporary wonder? What do we think NOW?

This podcast takes a look at Miller’s Crossing, Gabriel’s break-out American film and a truly iconic portrayal to add to his resume, from the point-of-view of two critics who watched it years ago and are returning to it for another assessment. What do they think?

The period gangster picture was a revelatory experience in Josh’s early cinematic life, but it had been a couple of decades since his last visit. Likewise for Adam. After getting unceremoniously bounced in the first round of the Best of the ’90s Filmspotting Madness tournament, they give “Crossing” another look and find it somehow an even greater achievement than that ecstatic first impression. A couple of  decades watching Coen Bros. movies can, it seems, help you see even their earlier work more clearly. (And, oh man, that Carter Burwell score.) 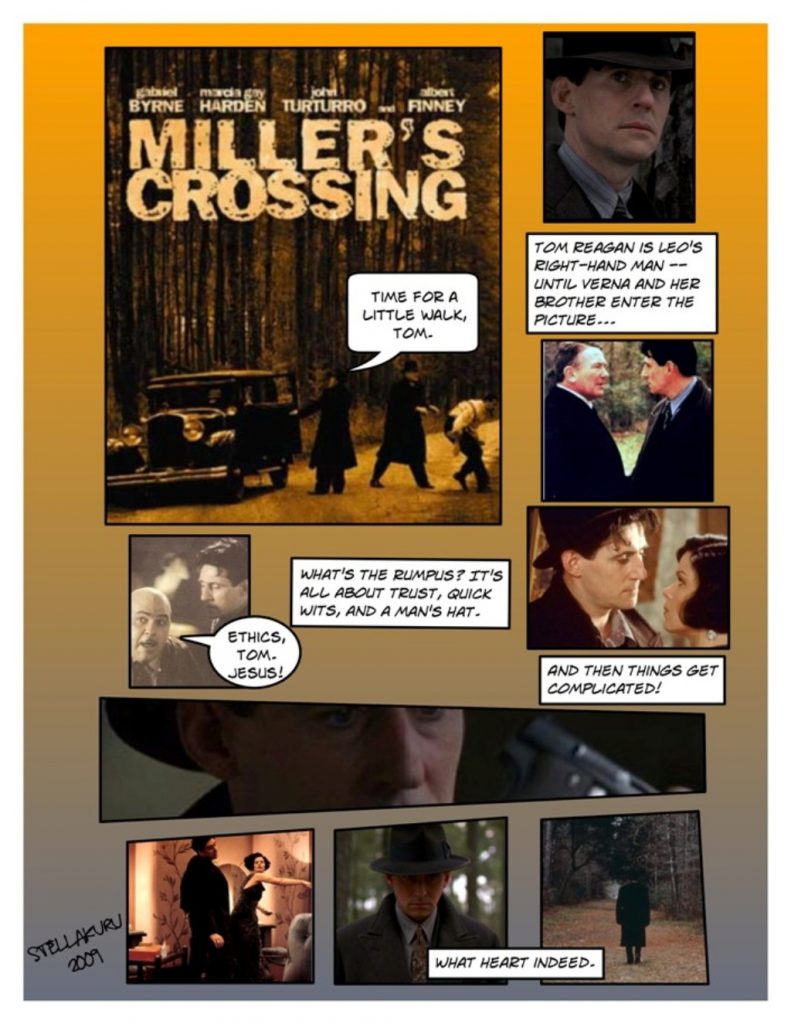 Thanks to eagle-eyed Byrneholic Elf, here’s an extra St. Patrick’s day goodie for you! Hanging around Gabriel Byrne should result in greater knowledge of Ireland, right? We shall see.

Go on! Take the quiz! If, like me, your Irish history and cultural knowledge is a bit on the slim side, this quiz will teach you 100 things you should know. And if, like me, you care about Ireland and one particular Irishman, you will want to know these things. No one is grading you. Only you and St. Patrick will know your score. wink 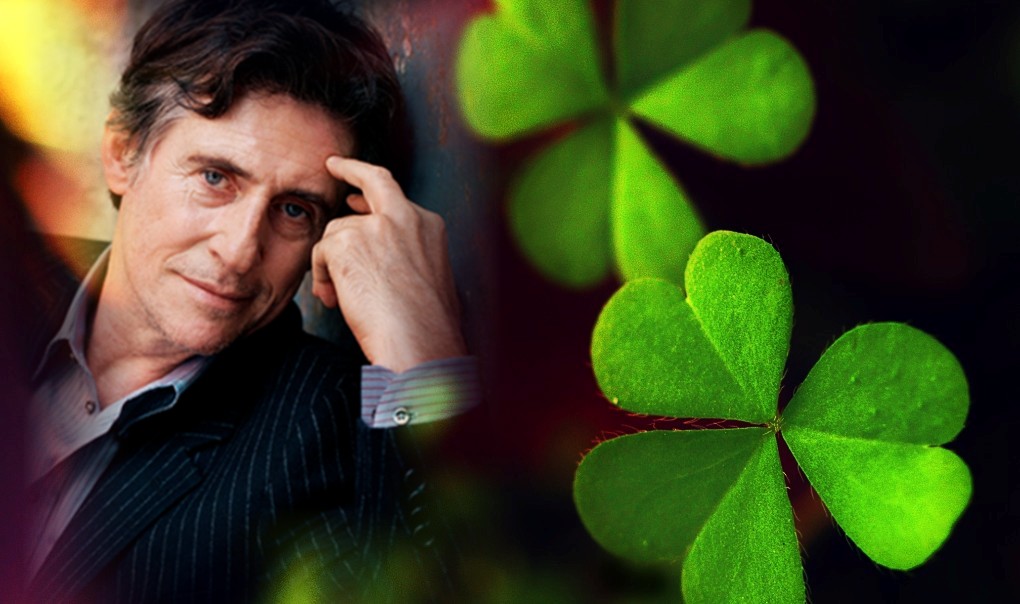 The first time I ever heard the words “Irish Diaspora,” Gabriel Byrne, Ireland’s Cultural Ambassador, was speaking at the opening of Imagine Ireland in New York City. I have learned a lot from him since about Irish culture and Irish history and the thread of resistance that runs through both. Check out this enlightening article from YES! Magazine for a look at why resistance is so important and how we might commemorate St. Patrick’s Day in a different way next year:

In sharp contrast to the dominant image of America’s Irish, Edward Said, a Palestinian American intellectual and founder of the academic field of postcolonial studies, lauded Ireland for its “fabulous culture of resistance.”

“I am so grateful to Ireland,” he said in a June 1999 interview in Dublin four years before his death. “You have had many more years of imperialism than we [Palestinians] have had, and you have produced a fabulous culture of resistance and an extraordinary spirit, which I desperately hope we can measure up to by about 10 percent.”

Said’s admiration of Irish resilience in response to centuries of British colonialism fills me with melancholy and distress when I consider the pervasive perception of contemporary Irish America.

I urge Americans of Irish descent to collectively revisit and deepen their understanding of the colonial and oppressive conditions that produced the Irish diaspora. I advocate for St. Patrick’s Day to become a day of remembrance of Ireland and Irish America’s intertwined historical experiences of oppression…

Now think about where we are in the United States of America at this moment in time. What will we call THIS in a decade or two? I wonder.

Thanks to Angelle for this article!

This summer: Hereditary, which premieres in USA June 8 and UK June 15.

Produced in 2017, amid #MeToo, Brexit, nuclear threats, and an epidemic of American violence, Hereditary might be the first true horror masterpiece of the Trump era. If Get Out was a reaction to the end of the Obama supremacy, perhaps Hereditary is here to rebuke the very notion of ancestry, of the history that has cursed us to this unimaginable reality. The straightforward nature of its staging as a highbrow genre film puts it on par with films like The Exorcist, The Shining, and Psycho. When it hits theatres this summer, I would like to have faith that the culture agrees. 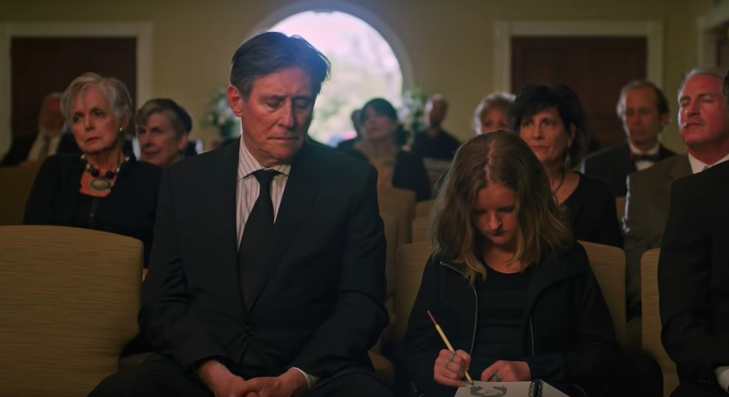 An L. A. Minute is also on the way this summer, though no date yet. Yay! We’ve been anticipating this film and now it is almost here!

Director Daniel Adams has been sharing pics on Instagram and is preparing the Electronic Press Kit for the film now, so we should have more information soon! 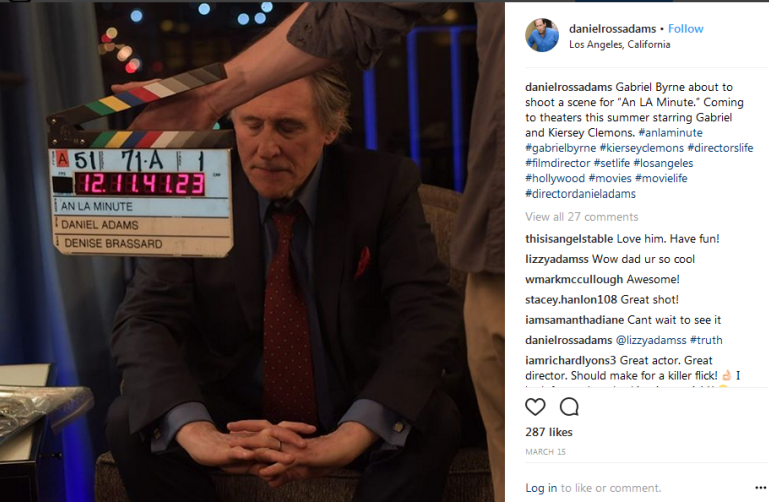 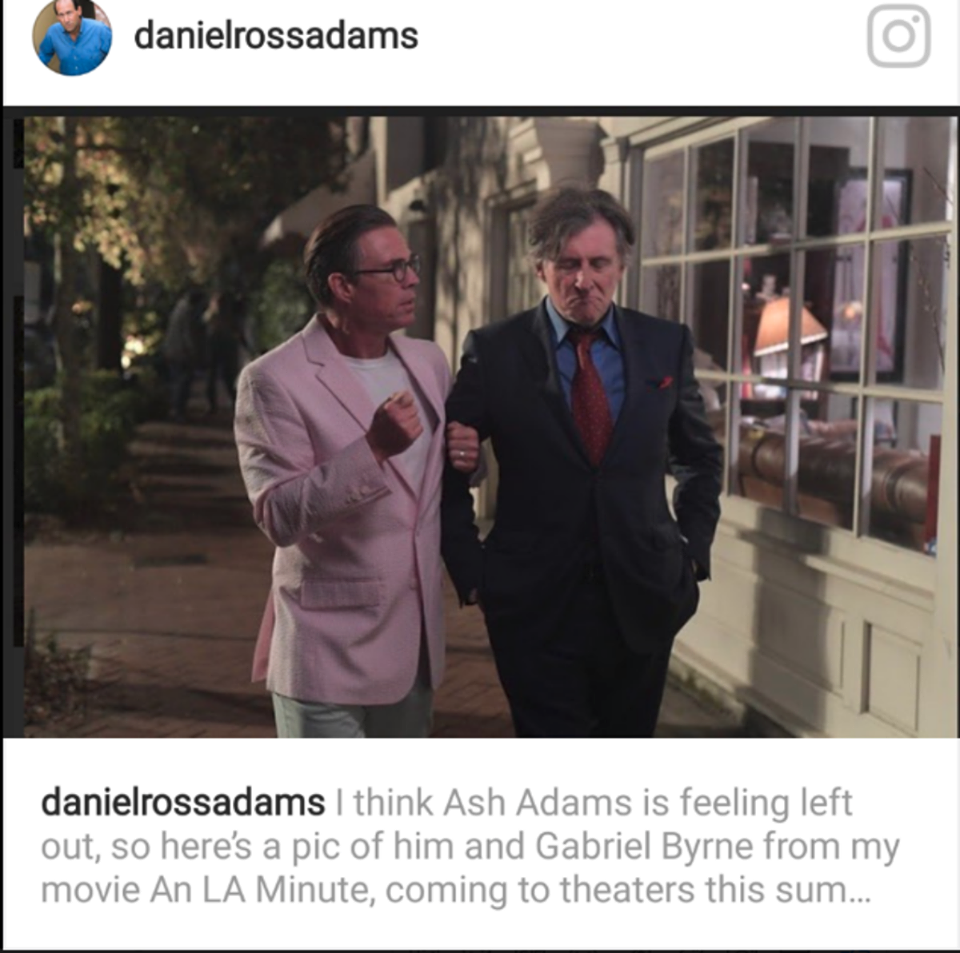 Gabriel was spotted on set in New Orleans and we don’t know what the project is yet. However, word on the street (otherwise known as Twitter) is that filming for the new series ZeroZeroZero has begun. There is no confirmation for any of this, so be patient and we shall learn more soon.

My research led me to the October 2017  Variety article below and this one at Deadline from 2014.

Long gestating high-end Italian TV series “ZeroZeroZero,” based on a chronicle of the global cocaine trade by bestselling author Roberto Saviano, is moving into production with “Gomorrah” director Stefano Sollima attached as director and showrunner. The series is co-financed by payboxes Sky Italia and Canal Plus.

Shooting on the eight-episode skein, which follows a shipment of cocaine from the Americas to Europe, is set to start in March 2018 with cameras rolling in Mexico, Louisiana, Central Africa, Spain, Italy and London. An entire episode will probably be set in the British capital, according to Sky Italia chief of content Andrea Scrosati. The show will be in English, Spanish, and Italian in roughly equal proportions.

Casting details are still being kept under wraps…

And that’s the news from the land of Byrne! Next month we have the Irish Arts Center Special Event, so get ready for pics and news about that. In the meantime, wherever you are, I hope it is Spring and you are out and enjoying the green. If it is not, then head off to your local art gallery or museum and stretch your mind and heart that way. You might find something that inspires you! heart 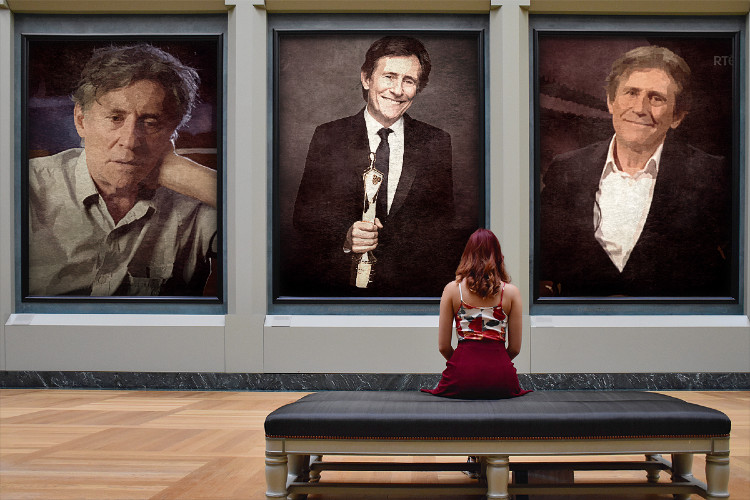